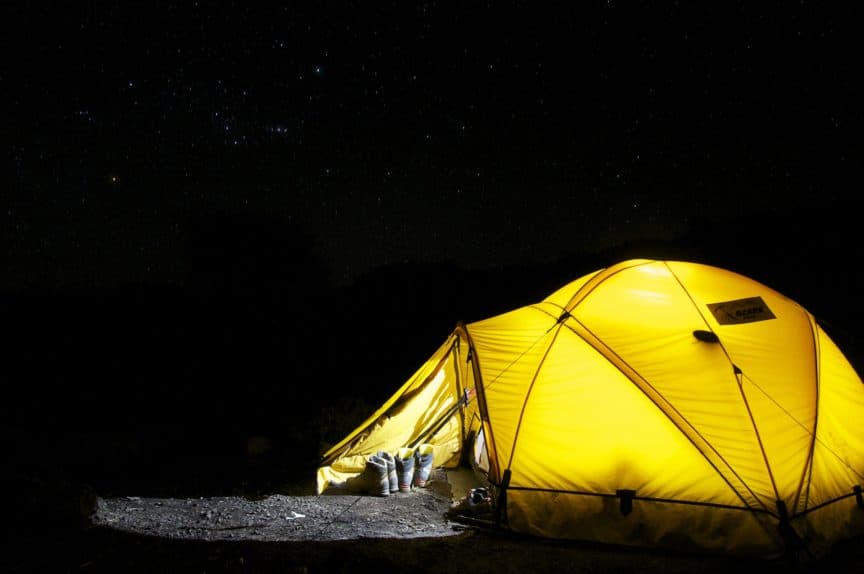 If you enjoy spending time in the great outdoors, you’ll already know just how different camping is now compared to a decade or so ago.

Getting back to basics no longer has to mean waiting for three hours to boil a cup of water, sweating it out in a stifling tent on a windless summer night, or listening to your neighbor ruin Jimi Hendrix songs on his out-of-tune guitar for the seventeenth time this weekend.

No, just like everything else in the world, technology has made its way to campsites as well. There are now a bunch of useful gadgets designed specifically for use while camping, and several general-purpose devices that are particularly useful when you’re setting up a temporary home in the middle of nowhere.

From camp stoves that charge your smartphone to portable hot showers, tiny speakers with great sound to efficient solar chargers and more, we’ve found the best camping gadgets for your next trip off the grid.

Have you ever looked at the flickering flames from a camp cooker and thought to yourself “wouldn’t it be nice if I could plug my phone into those”?

No? Well, luckily a few people did have that idea, and the end result is the Biolite CampStove, now on to its second version. The stove lets you burn most fuel sources you can find lying around in nature, including twigs and branches, and converts the wasted heat energy from your stove into electricity at the same time.

That power is used for two purposes: to run the inbuilt fan, which sucks air into the burn chamber and makes for a much stronger, cleaner flame, and to charge a USB device. This version includes its own battery to store excess power, so you can charge the battery while you cook, and then use it to charge your phone or other gadgets afterwards.

LEDs on the side of the stove let you see the fire strength, power output, and fan speed at a glance. With a roaring fire, it’s possible to boil a litre of water in under five minutes.

The company also sells a range of accessories, including a grill and kettle, and the CampStove 2 comes with a flexible gooseneck LED lamp that plugs directly into the USB port for extra light while cooking. 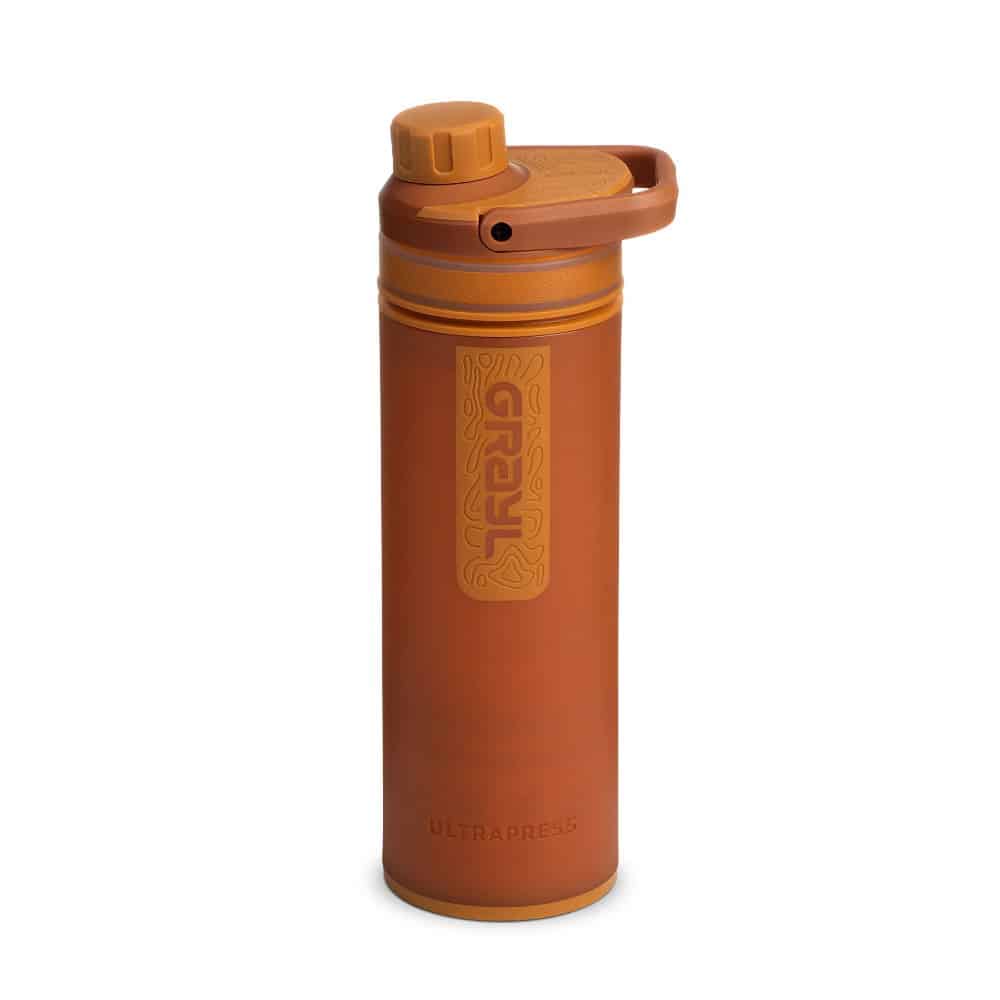 While you can usually expect the water at a maintained campsite to be safe to drink, the same can’t be said for the rivers, streams, and other sources you rely on in the backcountry. That’s why it’s worth packing a GRAYL.

It’s our favorite water purifier, and we did a full review of it here, including using it in places where the water definitely wasn’t safe to drink. It’s simple to use, working much like a coffee press: you fill up the outer shell from any clear water source, insert the inner container, and use your body weight to press down on the container and force the water through the cartridge.

The end result is around 16oz of purified water, and the company claims the GRAYL will get rid of at least 99.999% of viruses, bacteria, and protozoa/cysts. That last part is relatively unusual, since many water purifiers don’t touch protozoa. Certain metals and chemicals are also filtered out.

The purification cartridge lasts for around 40 gallons of water before it needs replacing, which should be more than enough to get you through any camping trip. Better safe than sorry!

Sick of sweating through breathless summer nights? Having a fan in your tent might seem like the height of campground luxury, but this Image model is inexpensive and works well.

It’s actually a two-in-one device, acting as a lamp, fan, or both. You can set the fan on the floor of your tent or hang it from the roof via the fold-out hook, and control the angle of the light and fan separately. Speed is controlled by a high/low slider, and there’s a separate power switch for the lamp as well.

Using a pair of D batteries, you can expect to get around three full nights of use out of the fan before needing to replace them. The LED lamp is more than bright enough to light up the tent, and you could use it for task lighting around the campsite at night as well.

All in all, it’s an effective, useful, and inexpensive gadget that deserves a place on your next camping trip.

Having a hot shower isn’t something you think too much about when you’re staying at a campground, but it’s a different story when you’re somewhere more remote. Sure, you can have a “refreshing” dip in the nearest lake or river, but there are only so many cold showers anybody can handle.

That’s where this Advanced Elements solar shower comes in. It’s a simple concept: just fill the flexible bag with water from a tap or river, put it in the sun for a few hours, hang it up at an appropriate height, and enjoy your shower.

Dozens of companies make competing versions, but we like this one for a few reasons. There’s a temperature gauge on the side to let you know what kind of shower you’re in for (it’ll easily reach 100+ °F/37+ °C,) and the inlet valve is nice and large to make filling the bag faster and easier.

In a nice touch, there’s a small mirror included, a couple of built-in pockets to stash your shampoo and soap, and velcro straps for hanging your washcloth.

The 2.5-gallon/12-litre capacity is enough for one person to have a lengthy shower. The bag is easily transportable, rolling up when not in use and weighing just 12 ounces. Larger sizes are also available if you’re traveling as a couple or group.

We’ve tested out a bunch of them, and right now, despite the silly name, the UE Wonderboom 2 is our top pick. At 14.8oz/420g it’s not too heavy, and the compact size and shape make it easy to find a space for.

It sounds great despite its petite size, with more than enough volume to  be easily heard around the campfire. You can even wirelessly connect a pair of them for stereo sound.

It’s IP67-rated against water and dust, so you don’t need to worry when it falls in the river or drops in the dirt. There’s a useful fabric loop on the top, ideal for hanging it from the nearest tent or tree, or your backpack as you hike.

You’ll get up to 13 hours of music, and when it does eventually go flat, you can charge it using a micro-USB cable from any portable battery, solar charger, or USB car adapter you happen to have with you.

If you’re car camping and not so concerned about weight, the UE Boom 3 is a bigger, louder version of this speaker, with 15 hours of battery life.

Sick of stumbling around your campsite in the dark? While it’s fine to use the flashlight on your phone in a pinch, it’s not that bright, and quickly drains the battery if you use it for very long. Better idea: grab this dedicated little Klarus model instead.

Despite its small size, the 1000-lumen LED reaches over 600 feet/200 meters, so you spot whatever it was you heard rustling around in the bushes. With an all-metal body and IPX6 water resistance, it can handle being dropped up to 10 feet or used in heavy rain.

You’ve got a choice of high, medium, or low-intensity settings, plus a strobe option to attract attention in an emergency. The EP10 will run for up to 11 hours at medium brightness, or at little over three hours at maximum intensity. Either way, once it goes flat, the torch is rechargeable from much any USB C charger.

Solar chargers have been slowly improving for years, getting smaller, cheaper, and more efficient as time goes by, and this Nekteck version is a great example.

It folds up to about the size of a large notebook when not in use, but unfolds to reveal three good-sized panels. Capable of outputting up to 21W of power in optimal conditions, the charger has a pair of inbuilt USB-A ports that you can either charge your device from directly, or plug a portable battery into to store power for later.

While you’ll get the best results in direct sunlight, it’s still possible to charge your gadgets on overcast days. It’ll just take longer to do it.

Weighing 18oz/510 grams, the charger has several eyelet hooks for hanging it from a backpack, tent, or anywhere else that takes your fancy. There’s even a useful pocket to store whatever you’re charging: while the charger might like to sit in direct sunlight for hours, your phone definitely doesn’t!

Very reasonably priced, it’s the ideal way of ensuring you never run out of juice no matter how far you are from the nearest power socket. 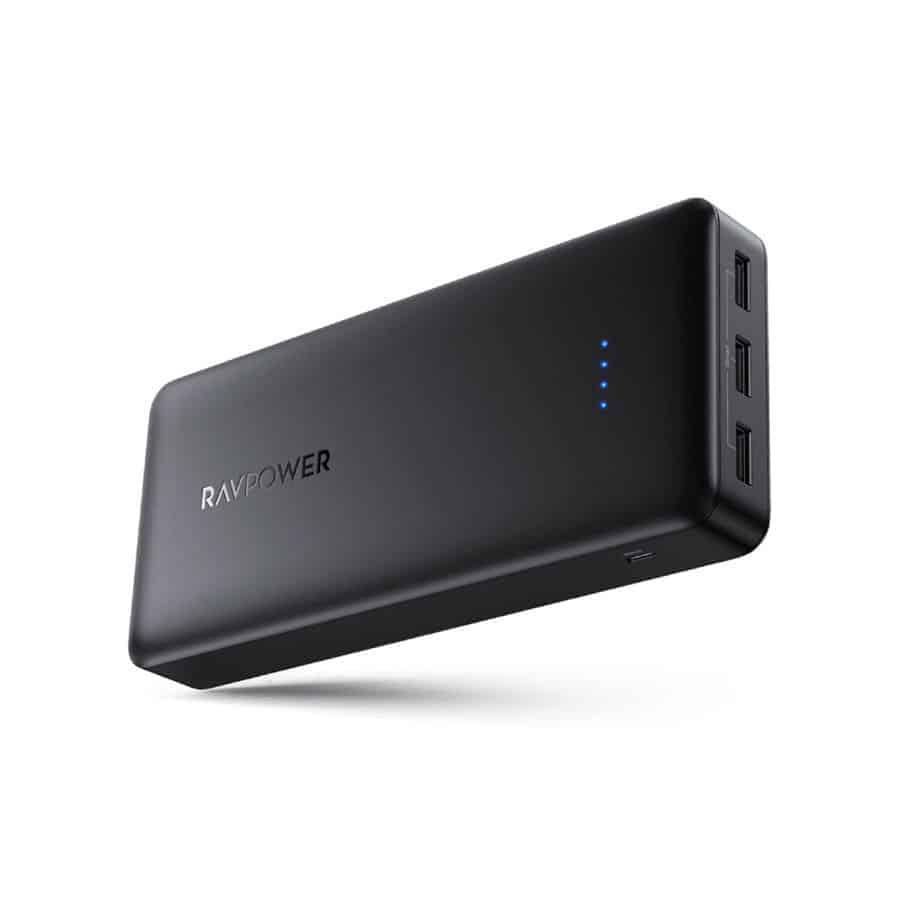 If you’re heading off-grid for a few days but still need to keep your gadgets charged, the easiest way to do it is with a portable battery. They come in all shapes and sizes, but if you’re away for several days, or have a bunch of gear to power, it’s worth going for one that can hold plenty of juice.

This RAVPower model fits the bill perfectly, its 32,000mAh capacity enough to fully charge a modern smartphone six or seven times, or smaller devices a dozen times or more. You can charge multiple gadgets at the same time via the three USB-A ports. The battery itself takes 8-10 hours to charge from empty with a high-speed USB charger when you get back home.

At 17.6oz/500g, it can get a bit heavy if you need to carry it in a backpack. For shorter trips, or if you can charge it up with the above solar charger or Biolite camp stove every few days, you probably won’t need a battery quite this big.

In that case, something like the Anker PowerCore 13000 is a good alternative, with enough capacity to still charge your phone three times at around half the weight and cost.

If you’re into long-distance hiking and need a very lightweight solar charging solution, there’s another option as well. The Sunslice Photon combines five small panels with a 4000mAh battery, weighs just 7.8 ounces, and gets enough juice from the sun to charge most smartphones in as little as three hours.

The Photon is only appropriate for charging a single phone or other small device like a handheld GPS unit or e-reader, though. For multiple gadgets or multiple campers, the separate panel/battery combos mentioned above are a better option.

Main image via bhossfeld, other images via respective manufacturers. 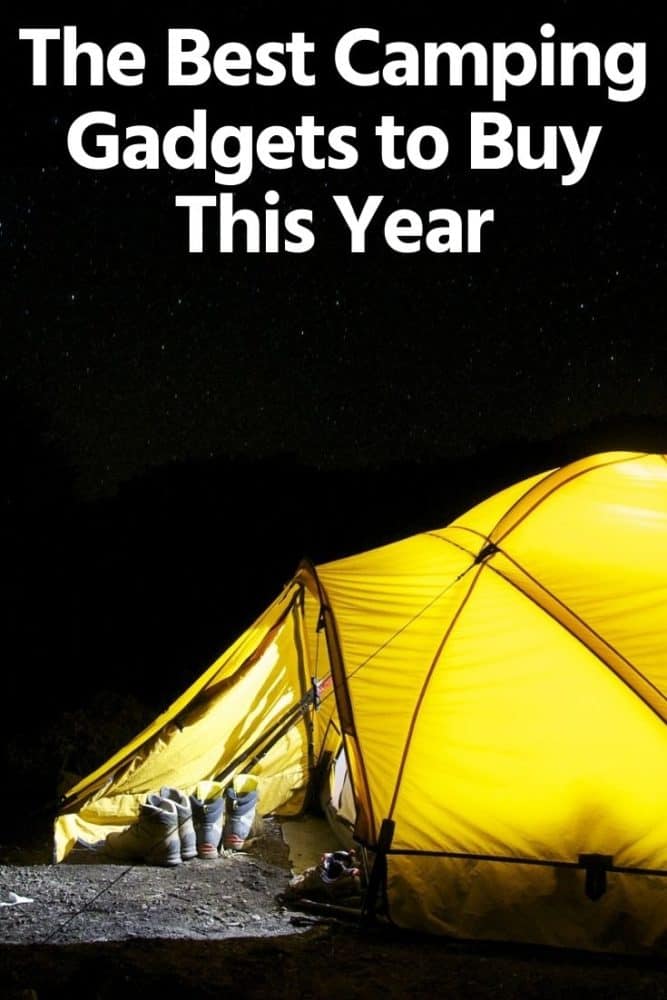