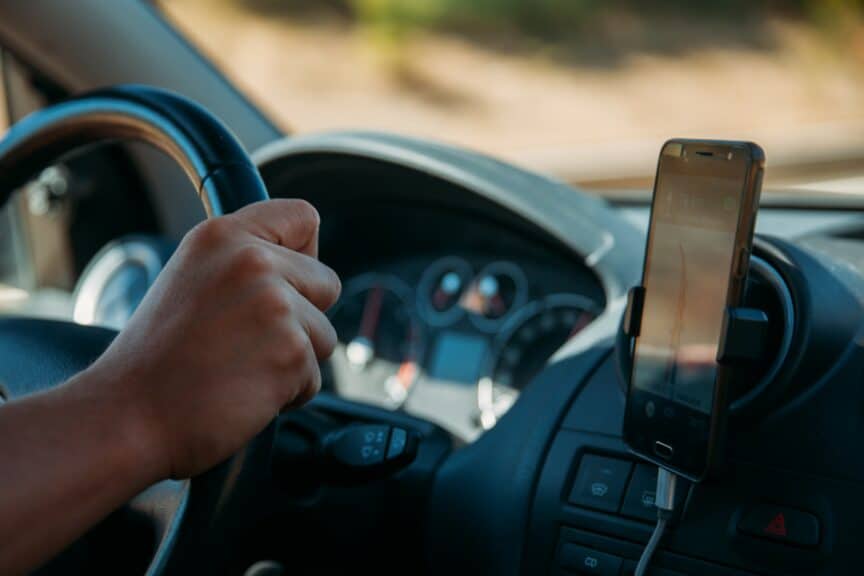 These days, most of us use our phones to navigate while driving. While convenient, this can also be distracting, particularly if you’re looking down at a device on your lap or jammed awkwardly in the center console. For the safety of both yourself and other road users, it’s better to use a car phone holder.

Staying safe on the road is no joke. Here in the United States, automobile accidents are a leading cause of death, according to the CDC. Non-fatal accidents take their toll as well, with over 4 million Americans injured in car accidents every year. It’s little different in other countries.

Car phone holders are inexpensive, easy to set up, and make it much safer to use GPS apps in your vehicle. There are a few different types of these mounts: some attach to your windshield or dash, others clip onto air vents, while still others are designed to sit in a cup holder.

When choosing a car phone holder, the biggest consideration is the type/style. Generally, phone holders that mount on either the dashboard or the windshield are the most popular. Keep in mind, however, that not all states allow windshield mounts: be sure to check their legality in your area.

Air vent car phone mounts are easy to install and move between vehicles, but do tend to block some airflow and aren’t always as stable on bumpy roads. Cup holder mounts are less popular than they once were, and generally aren’t as safe, since you still need to look down quite a ways to check Google Maps or Waze!

If you’re on the hunt for a good car phone holder, this guide is for you. We’ve tested dozens of models over the years, in both rental cars and our own vehicles, to figure out what’s really worth buying and what isn’t. From simple magnetic options to fancy windshield mounts, these are the best car phone holders of 2022.

The Kenu Airframe Pro is a simple, versatile, and affordable phone holder, with a few extra features that lift it above the pack of similar vent-mounted alternatives.

The company makes a couple of different versions, but the Airframe Pro is the one to get. It typically costs a few dollars more, but can handle larger phones and cases (up to 3.6″ wide) and has a 360-degree rotating ball joint that gives more flexibility both about how you mount it and your phone’s orientation while driving.

The holder attaches firmly to horizontal or vertical vents, with a stronger grip than many of its competitors thanks to the push-button mechanism that opens and closes the pinchers at the back.

Other vent-mounted models often tend to fall out on bumpy roads or during sharp turns, but you’ve really got to be putting a lot of effort in to get the Airframe Pro to do the same.

The spring-loaded arm keeps your phone firmly in place while driving, but doesn’t require enormous amounts of pressure to release at the end of the trip. Most people should be able to do it with one hand, without pulling the entire mount out of the vent at the same time.

In a pinch, you can also stick a credit card or similar into the pinchers at the back of the mount to turn it into a phone stand. It doesn’t replace a dedicated stand, but if you’re on a plane or in a hotel room, it’ll do the job just fine.

Overall, we tend to prefer vent mounts like this over windscreen or dash versions. They’re particularly good for travel, since they’re smaller, lighter, and easier to mount and move between vehicles than other models.

The location of the air vents in most vehicles makes it easier to run a charging cable to the phone than other types, without having it draped over the dashboard. They also don’t run the risk of having the adhesive or suction cups wearing out over time, or leaving a sticky residue behind after removal.

We’ve used Kenu mounts for years without issue, thanks to a build quality that’s noticeably better than the no-name budget versions. If you do have a problem, though, the company offers an impressive lifetime warranty.

The only real downside of the Airframe Pro, and an issue that’s common to most vent-mounted holders, is that it can struggle to firmly attach to recessed air vents. A slight recess is usually fine, but more than that can result in a less-secure hold.

The AINOPE Car Phone Holder Mount is an air vent phone mount that clips on to horizontal air vents on your car’s dash. Like the Kenu model above, this type of holder is easy to install and works in most vehicles, but you’re more limited in terms of where your phone can be displayed.

This particular mount is unusual, in that it has support on the base as well as the side. Simply slide your phone into place, and its weight pushes the lower mount component down while the sides clamp on automatically.

When not in use, it’s a very compact mount, at about half the height of a credit card. This means that unlike many other vent-mounted models, it won’t substantially block airflow from your air vents. Of course, when your phone is mounted, airflow will be restricted a bit.

The clips adjust to the size of most phones, with the holder designed to be used with phone sizes up to 6.7″ and thicknesses up to 14mm. This means that even larger phones, and somewhat thicker cases, should still work with this mount.

While we prefer the Kenu Airframe Pro overall, the AINOPE is typically cheaper, handles slightly larger devices, and is a strong alternative option if our top pick isn’t available.

There are two downsides, however. One is that the mount’s design can block the auxiliary ports on some phones, making it difficult to play music if you have an older vehicle without Bluetooth audio.

The other is common to virtually all vent mounts, in that your phone may get hot when you have the heater on as it’s directly in front of the air vent. Most cars have the option to close specific air vents, however.

The TOPGO Cup Holder Phone Mount simply sits in your existing cup holder, with a long gooseneck mount for your phone that lifts it up closer to your face and can be rotated through 360 degrees.

There’s no real installation required: just press the mount into your cup holder and adjust the clamps for a tight fit. It’s designed to work with cup holders with a diameter of up to four inches: that covers the vast majority of them, with most topping out at around 3.8 inches.

The gooseneck arm extends up to eight inches, but because the mount sits in the cup holder, you’ll still need to look down somewhat to see your phone. As such, this isn’t the safest design when it comes to keeping your eyes on the road.

On the other hand, some people prefer to have their phone a bit out of sight so that it doesn’t distract them. This works well if you prefer to use voice prompts for navigation instead of visual cues, or mostly use your phone for calls rather than driving instructions.

The other downside of this holder is that it may not fit phones with battery cases, or thick protective cases like OtterBoxes. The maximum thickness is about half an inch (13mm, to be exact), so make sure your phone will fit if you have bulky attachments.

We’ve used a few different UGreen accessories over the years, and they’ve always struck us as being well-made and good value for money. The company’s magnetic car phone mount is no exception, a simple, inexpensive air vent mount with four powerful magnets to secure your phone in place.

The mount can rotate 360 degrees, so you can switch between vertical and horizontal viewing depending on the app you’re using, or angle the screen towards you as needed. Because there are no clamps, this mount should work with just about any size of phone: it’ll handle anything between 3.4 and 7″ wide.

Simply stick the adhesive plate onto the back of your phone or case (in the middle if you don’t have wireless charging, or towards the bottom if you do), firmly press the mount onto your vehicle’s air vents, and let the magnets do their thing.

Silicone fins at the back firmly hold onto most vents, without the scratching you sometimes get with cheaper models. It’s quite compact, and won’t substantially disrupt airflow from the vent: the phone itself is likely to block far more.

While the magnets are strong and secure, the air vent clip doesn’t attach perfectly to certain vent designs. You’ll be fine with most thin horizontal vents, but as with most other vent mounts, thick, vertical, or radial designs are more likely to cause a problem.

The iOttie Easy One Touch 5 mount is an unusual option. It can be mounted to the dashboard or the windshield, with a telescopic arm that extends 5-8 inches and pivots through a 260-degree arc to adjust the viewing angle of your phone.

The telescopic arm design is more secure and less shaky than the thinner gooseneck mounts, with minimal shaking even on rough roads. It’s designed for any device between 2.5″ and 3.5″ wide, which covers most phones. Most mount manufacturers use screen size, but iOttie uses phone width instead.

This holder has a suction-cup style mount, but also requires the use of a semi-permanent base pad. You first stick the pad to the dashboard or windscreen, and then attach the mount to the pad. This makes it much more stable, but is a downside if you plan to move the mount between vehicles: the pad can leave sticky residue if you try to remove it.

The suction cup mount doesn’t always hold up very well to hot weather, either, and the adhesive may melt on very warm summer days. If you live in a hot climate, you may wish to choose a different option.

The Mankiw Wireless Car Charger is both a phone holder and a Qi wireless phone charger. It mounts to your car’s dashboard, and the height- and angle-adjustable arm can be moved around to suit your preferred viewing position.

The wireless charging abilities of this holder are impressive, supporting up to 15W Qi fast charging on certain Android phone models. The phone holder features are basic, but functional: it’s a good choice if you want wireless charging, but if you just need a basic phone holder, there are cheaper options.

A cord runs from the mount down to your vehicle’s cigarette lighter power source, or to a compatible QC 2.0/3.0 car charger. Note that normal car USB ports and most car phone chargers won’t supply enough power for 7.5 or 10W charging.

If you’d like faster wireless charging, you’ll likely want to purchase this adapter or a similar version that supports QC 3.0 output as well.

Other than that need for a separate power adapter, the only real downside of this device is that the suction cup mount can be a little shaky with heavier phones. For anyone with small to mid-size phones that support wireless charging, however, it’s an excellent choice. 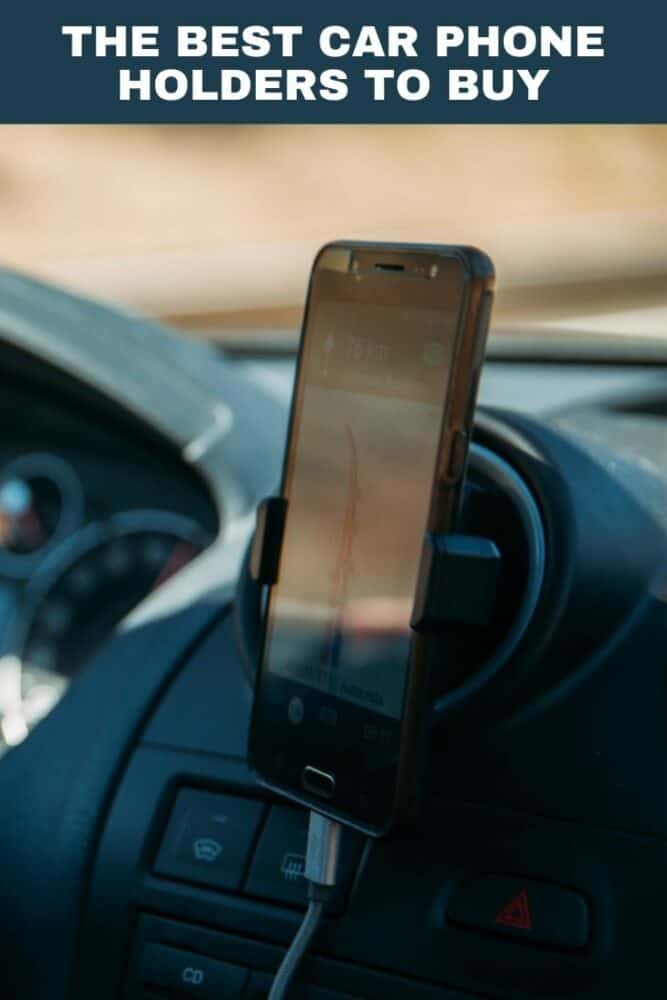