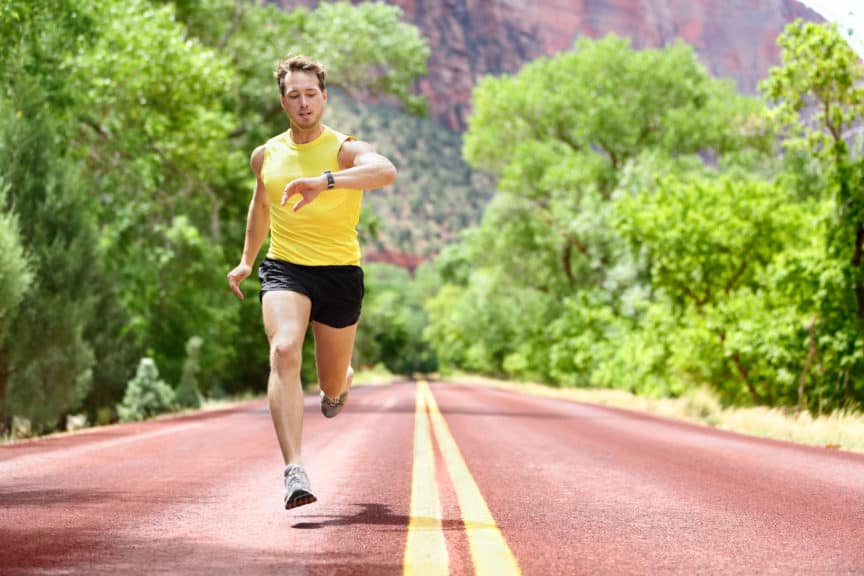 If you’re looking to improve your running, I would argue that getting a running watch is the second-best thing you can do. The best thing to do is to simply run more—but you already knew that!

A quality running watch provides valuable insights into how you run. Metrics like distance, heart rate, pace, and calories burned are the most helpful (albeit the most obvious), but many watches also track metrics like stride length, cadence, estimated VO2 max (maximum oxygen consumption), and more.

All of these can be used to analyze and improve your running, and for many people, having this data available helps provide the motivation to keep pushing forward, becoming a better runner in the process.

Most running watches can also track other activities, like walking, biking, yoga and more. With that said, if you’re looking for a more general fitness tracker, we have a dedicated guide for that.

Whether you’re a casual weekend runner or you’re training for your next ultra marathon, these are the best running watches on the market.

Garmin has long been a leader in the sports wearables market, and is particularly dominant when it comes to running watches. The company has many different watch models, but the Forerunner 945 is one of its best, particularly for serious runners. Overall, it’s our pick for the best running watch on the market.

The 945 has extremely good GPS tracking, which means greater accuracy whether you’re jogging down the block or slogging through the forest. Unlike most running watches, it also has detailed, colored maps that display directly on the screen. If you get lost out on a run, this watch can help get you home: no phone required!

Speaking of running without your phone, this watch has two other features that make that dream a reality: contactless payments using Garmin Pay (just save your credit card details ahead of time), and on-board music storage.

The watch can store up to 1,000 songs, either from your digital library or downloaded from a paid service like Spotify. The watch simply connects to Bluetooth headphones, letting you play your tunes while out on a run! The high storage capacity, plus support for Spotify, Amazon Music and Deezer, make this the best running watch with music.

The Forerunner 945 also has very impressive battery life. If you’re just using it as a smartwatch, expect the battery to last up to two weeks. For active running with GPS enabled, the battery can hold out for around 10 hours.

Ultra runners will appreciate UltraTrac mode, a setting that reduces the frequency of GPS updates to substantially extend battery life (up to 60 hours). Combined with accurate biometrics, this make for one of the best ultra running watches, while the waterproof design and support for outdoor swimming/biking make it a great choice for triathletes as well.

Finally, Garmin’s “training status” interface (available on most of the company’s running watches) provides an at-a-glance view of your current fitness. It uses data from your last seven days of activity to indicate whether you’re in recovery, productively training, maintaining, peaking, or losing fitness due to inactivity.

The only real downside of this watch is that it’s a touch bulky, and really looks like a running watch. It’s not ugly, but it’s also not super stylish. The price is also a bit high, but given its impressive features and performance, it’s well worth the money for serious runners.

The PACE 2 offers accurate satellite tracking and mapping, and unlike most budget models, it has a barometer to accurately gauge altitude. As a bonus, it can track several other activity types in addition to running.

The watch is very lightweight at just 29g (one ounce), so you’ll barely feel it on your wrist. Despite that, the battery life is impressive, with up to a whopping 30 hours in active GPS mode.

The high-resolution display looks good, although it is a bit dark unless you turn on the backlight (this likely helps with the PACE 2’s impressive battery life). Unfortunately, there aren’t many customization options for the watch face itself, especially compared to Garmin watches that have hundreds of third-party watch faces and apps.

The COROS 2 doesn’t have NFC, so you can’t use it to pick up a burrito on the way home from a brutally long run. There’s no music storage either, so you’re stuck with bringing your phone or an iPod (do those still exist)?

For a budget device, though, I’m totally okay with leaving these features out. Overall, the COROS 2 is a strong performer and even better value.

Note: There are certainly cheaper options out there, but I think the PACE 2 strikes the best balance between features and price. If you’re a very casual runner, you’ll be better off with an inexpensive fitness tracker over a really low-end running watch.

Another great option from Garmin is the stylish Vivoactive 4S. Its 40mm face is smaller than usual, and makes it a particularly good choice for women, and indeed anyone with thinner wrists.

The Vivoactive 4S can also track menstrual cycles and other health metrics that most watches don’t include. It also has a proprietary “body battery” feature that aims to estimate how much energy you have at any given time, based on how you slept, your heart rate, how active you’ve been, and other factors.

The watch also has animated workouts right on the screen, which you can use to follow along with basic bodyweight exercise routines, yoga, and more.

Advanced features like music playback and storage (1000 songs), and Garmin Pay contactless payment, are built in. Battery life is reasonable, at around five hours of active GPS and music playback, and up to a week of lighter use.

The Vivoactive 4S looks much classier than your average running watch. Visually, it’s more like a smartwatch than a running watch, yet it can track 20+ different activities.

With that said, the Vivoactive is a bit light on running-specific features and data. You won’t get as much detail from the after-run reports (VO2 max, cadence, etc.) as you would from a watch like our top pick, the Forerunner 945.

Instead, the Vivoactive is best used as a smartwatch and general health and fitness tracker. It’s still well suited for most runners, but if you’re a running data nerd or a marathoner, you may wish to opt for another option on this list.

If your idea of a fun weekend involves heading into the hills for some epic trail running, the Garmin Instinct Solar could be your new best friend.

It’s got a built-in compass and barometric altimeter, both of which are very accurate. But more importantly, it’s solar powered. Yes, your watch will literally be charging itself as you charge up hills, so you never have to worry about a dead battery.

This watch packs a punch, and it can take a punch, too. Its design is certified to military standard 810, which means that it’s built to withstand shock, heat damage, and water damage. So when you inevitably slip on a gnarly trail, you can worry more about your wrist than the watch wrapped around it.

Another feature that makes this watch ideal for backcountry runs is that like the 945 above, it uses three navigational systems. While most watches rely solely on GPS (Global Positioning System), the Instinct Solar also uses the Glonass and Galileo satellites. When GPS signal is weak, this helps improve accuracy and tracking.

As you may expect from a tough-as-nails watch with built in solar capabilities, the Instinct Solar is a bit on the bulky side. It’s definitely designed for the outdoors, and doesn’t have contactless payment or music storage support, so you probably won’t wear it as your daily driver watch.

For hitting the trails, though, it’s tough to beat the performance and reliability of the Garmin Instinct Solar.

Garmin is the leader in the running watch world, but many of its newer models are a bit on the expensive side. You don’t have to pay a fortune, though: if you want Garmin tech but also want to save a few bucks, check out the Forerunner 245 Music.

Released in 2019, it’s now a few years old, but still has many of Garmin’s best features for runners at a much lower price than the latest models. This includes the training status interface, accurate GPS tracking, advanced running dynamics information, and more.

It even has a Pulse Ox monitor (which measures blood oxygen saturation, and that some Garmin devices don’t have), and it incorporates some of Garmin’s general health trackers, like Body Battery (described above with the Vivoactive 4S).

As the name suggests, you’ll also get music storage and playback over Bluetooth. Battery life is pretty good, at around six hours of active GPS and music, and up to a week of light use.

There are a few drawbacks, which you’d expect from a budget model. The 245 doesn’t have NFC, so you can’t use Garmin Pay. It also lacks a barometric altimeter, which means you’ll have far less accurate altitude stats (the watch relies solely on GPS data for its altimeter readings).

For the money, though, it’s a fantastic entry into the world of Garmin watches.

So maybe you’re not the next Usain Bolt. Maybe you’re more of a jogger than an ultramarathoner. And maybe you just want a slick smartwatch that can also track your runs, rather than a dedicated running watch.

In this case, the Apple Watch Series 7 is the way to go. A big step up from previous models, the upgrades most relevant for runners include a brighter, larger display, IP6X dust resistance, and a more crack-resistant screen glass.

To be clear: this is a smart watch, not a running watch. You’ll get blood oxygen saturation and heartrate/ECG monitoring, as well as more general-purpose information like sleep quality, but it’s not going to provide the same level of granular detail that something like a Garmin would.

The running features are comparatively basic, but it can still provide useful information about your evening jogs and longer weekend runs, including distance, cadence, pace, and more. You can also download music to the watch ahead of time, and play it back over Bluetooth.

As is often the case with Apple products, the main downside is cost. That said, at least when you’re comparing the Apple Watch to high-end running watches, the price seems more reasonable. Battery life will also be an issue for multiday events: it needs a charge each day, especially with heavy GPS use.

In short, if you’re looking for an all-around smartwatch that also tracks runs and other physical activities, go with the Apple Watch. If you’re a dedicated runner, though, you’ll get more out of one of the Garmin or Coros models we mentioned above.

Note: While the inbuilt apps are fine as far as they go, an Apple Watch gets a lot better for runners when paired with a quality third-party app. The best running app for Apple Watch (in my opinion) is Strava. 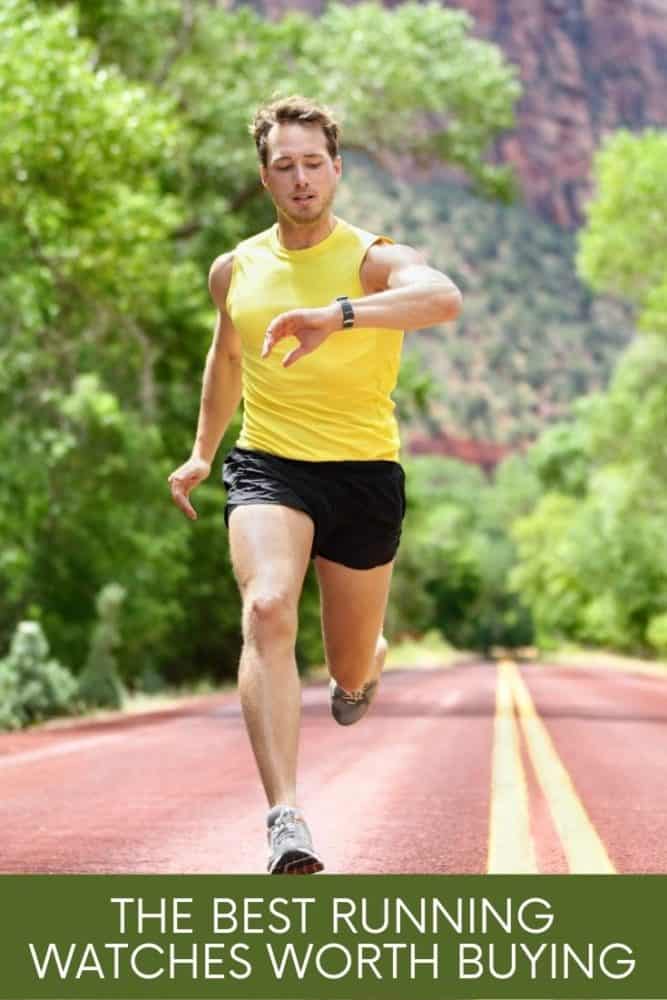