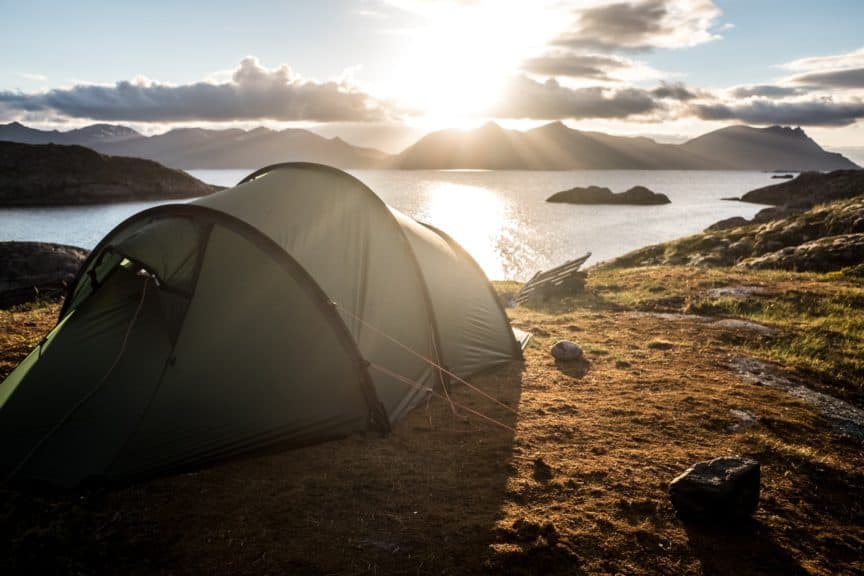 When you’re exploring the great outdoors, there’s only so much battery power you can count on and only so much you can carry with you. Solar power is a valuable and often untapped resource for campers, hikers, and other nature lovers.

It’s also a resource that never runs out. The best solar gear is able to charge even in rainy or cloudy weather, just as long as there’s some daylight available.

An unlimited source of power is invaluable for people who travel alone or go on longer journeys off-grid. If something should go wrong, you’ll always have a power source available to let you see, cook, or call for help.

Solar-powered gadgets can also provide a unique party trick for backyard events, picnics, tailgating, or long days at the beach. You’ll make a lot of friends with a cooler that guarantees cold drinks even on the hottest summer days.

Wherever you’re using them, these are the best solar-powered camping gadgets available right now.

Since they don’t require a very large solar panel, there are plenty of quality sun-powered lights and lanterns on the market. They’re a low-cost safety measure for anybody spending time under canvas, whether you’re camping from your car or backpacking on foot.

The MPowerd Luci Outdoor 2.0 does it all, with a small price tag that makes it well worth the investment. The company behind it has been around for over a decade, and as a B Corp, reinvests most of its revenue into sustainable clean-energy solutions.

An internal 1000mAh battery powers the expandable lantern for up to 24 hours, and the small solar panel fully charges the battery from sunlight in around seven hours. To use the panel, you simply turn the lantern upside down and leave it sitting in the sun or hanging from your pack strap as you walk.

The lantern has high, medium, and low-power options, along with an emergency flashing mode. The low-light feature is ideal for reading or moving around in your tent at night when you don’t need or want the extra brightness. A strap on the top lets you hang the lantern from a tree or your tent as needed.

There’s no need to worry about dust or water thanks to the IP67 ingress rating, and despite that durability, it’s super small and lightweight. The lantern weighs a bit over four ounces, and collapses down to just an inch high when not in use. Finding space in your backpack won’t be a problem!

A solar-powered battery has a place on nearly any outdoor adventure. They don’t cost much and provide a guaranteed lifeline in an emergency. We recommend the BLAVOR PN-W09 Solar Power Bank, which has five fold-out solar panels that charge the 20,000mAh battery.

Unlike single panel solar power banks that only have solar power as a backup option, this five-panel model is designed specifically for solar charging. The panels attach magnetically to the battery, so you can remove them and just use the battery by itself as needed.

The 20,000mAh capacity is impressively large, letting you charge the latest iPhones about five times or an iPad at least twice, but it also means the battery requires 18+ hours of sunlight to go from empty to full.

Fortunately, you can also charge it from a wall socket via the included USB C cable before leaving home, then keep it topped up using the sun’s rays after that.

☀️ Looking for a smaller or larger option? These are our picks for the best solar power banks at the moment.

For extra comfort out in the wilderness, invest in a solar-powered generator. A generator and solar panel combo will run you a few hundred bucks, but can power just about anything you’d think to bring on a camping trip.

The Jackery Explorer 300 Solar Generator charges in 5-6 hours from a solar panel or car accessory socket, or around half that from a wall outlet. Either way, you’ll get ~300 Watt-hours of portable power: that’s around 30 charges of an iPhone, two laptop charges, or 20 hours of running an LED camping light.

It’s surprisingly portable for what it offers: the generator and solar panels are 6-7 pounds each, and both have a useful carry handle on the top that makes it easy to load and unload them from the car or move around your campsite.

If you need even more power, other variants are available with even greater battery capacity, USB C ports, and higher maximum output. The unsurprising trade-off is that they’re noticeably larger and heavier as well. We reviewed one of the big brothers of this generator in the past, and came away impressed.

A solar-powered speaker is a fun novelty item ideal for camping or days at the beach. Unlike similar models, ABFOCE’s Solar Bluetooth Speaker has an outer casing that’s IPX6 rated against shock, dust, and water. It’ll happily take splashes and rain in its stride, but can’t be fully submerged in water.

Every 10 minutes of solar charging on a sunny day equals about half an hour of music, and it will continue to charge even while playing. After being fully charged from either the sun or a wall socket, the speaker can play music for up to 60 hours from its 5000mAh battery.

Weighing just over a pound, the 10W speaker includes a built-in LED flashlight, and can function as a power bank for small USB devices. It won’t charge your phone especially quickly, but should still be able to eventually top it up after a few hours.

GoSun has been paving the way in solar camping technology over the past few years, with a bunch of successful Indiegogo campaigns and a wide range of solar-powered gear. One of the most interesting is the company’s solar oven, which promises no need for fuel or fire when cooking food or boiling water.

The Go model is the smallest and lightest in the range, and is designed for solo campers and backpackers. The oven packs away into a compact hardshell case when not in use, weighs two pounds (0.9kg), and is approximately 14 x 7 x 3 inches when folded up for transport.

It reaches temperatures of up to 550°F (290°C) to cook meals in 20-45 minutes depending on the type of food and amount of sunlight available. You can also use it to boil water for warm beverages or dried foods, with the cooking chamber holding up to 13.5oz/400ml at a time.

GOSUN also makes a couple of other models for when you’re traveling with other people. The Sport cooks 2-3 meals at once, with a capacity of 39oz/1100ml, and offers somewhat faster cooking times as well. It weighs seven pounds.

The largest unit, the Fusion, is a hefty beast designed for families or groups of friends. Weighing a solid 14 pounds and measuring 23″ x 13″ x 13″, it’s intended for car camping, not carrying on your back. It’s a hybrid version, which means you can also run it from your vehicle’s 12v accessory port if there isn’t enough sun around. It’ll take up to an hour to cook your food, but can handle 4-5 meals at once.

GOSUN also makes impressive solar-powered coolers that can actually produce ice when you’re in the middle of nowhere, and keep everything cold indefinitely as long as you’ve got some form of power.

You’ve got a couple of options: the Chill and the Chillest. The main difference between the two is that the Chillest has two separate cooling zones, so you can make ice in one section and use the other for standard refrigeration. With the Chill’s single zone, it’s one or the other.

Either way, the touchscreen control(s) let you set a desired temperature anywhere between -4 and 68F. The 40 or 45L cooler has two rugged wheels and a pullout handle, and includes a bottle opener on the side so you’re never caught short.

It’s able to be powered directly from a wall outlet or DC power cord using a vehicle accessory socket, or its power bank can be charged using solar power via the bundled panels. You can expect around ten hours from a single charge, although that varies widely based on how you’re using it.

There are a number of benefits to not needing ice to operate. Obviously you don’t need to track down bags of ice before use, and no internal space is wasted, leaving more room for drinks and food. No ice also means less mess, and no risk of soggy sandwiches.

If you want ice for your drinks, just make it yourself!

There’s probably a shower nearby if you’re at a campground, but when you’re deep in the woods, hot water is hard to come by. That’s where solar showers come in.

The Advanced Elements 2.5 Gallon Summer Shower is our favorite for a few reasons. The 2.5-gallon/12-litre capacity bag weighs just 12 ounces and comes with a temperature gauge on the side that lets you know when your water is ready.

Other handy extras include a small mirror, built-in pockets for your shampoo and soap, and Velcro straps for hanging a washcloth. To use it, simply fill the flexible bag with water from a tap or river and put it in the sun for a couple of hours.

When you’re ready to use it, hang the shower bag up at a height above your head to enjoy a warm shower in the middle of nowhere. A larger size is also available for couples and groups.

Solar-powered gear can set you back quite a bit, especially for unusual options like cookers and coolers. That being said, it can also revolutionize the way you camp, backpack, or go to the beach.

At a minimum, invest in some solar safety gear to ensure you’re never left stranded. A solar-powered light and battery pack should accompany any lengthy or solo outdoor adventure.

⛺ Planning a camping trip? Check out our articles on the best camping apps, gadgets, and portable batteries. 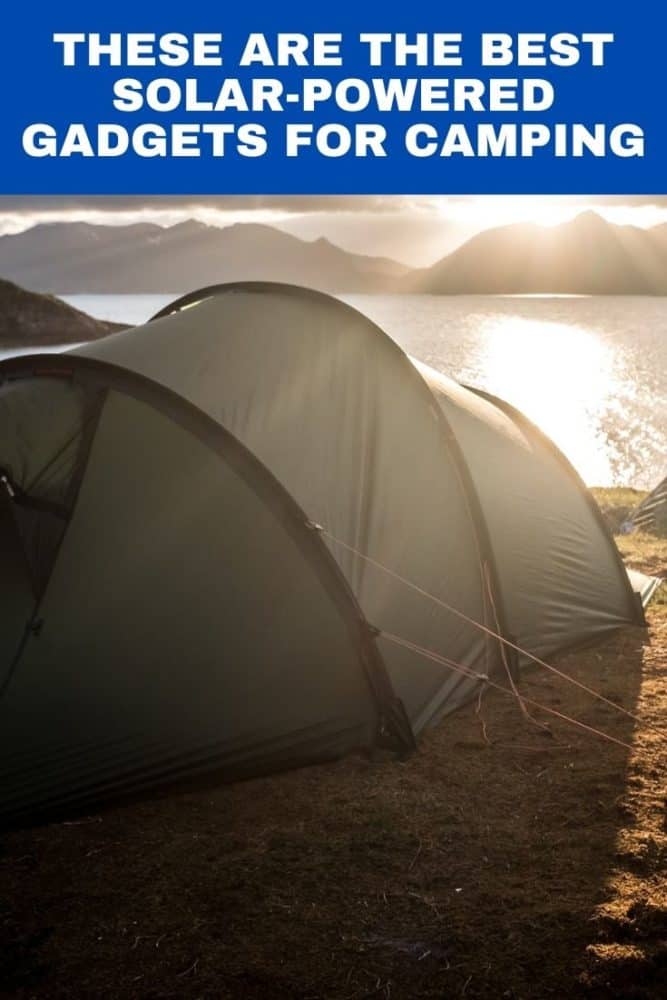