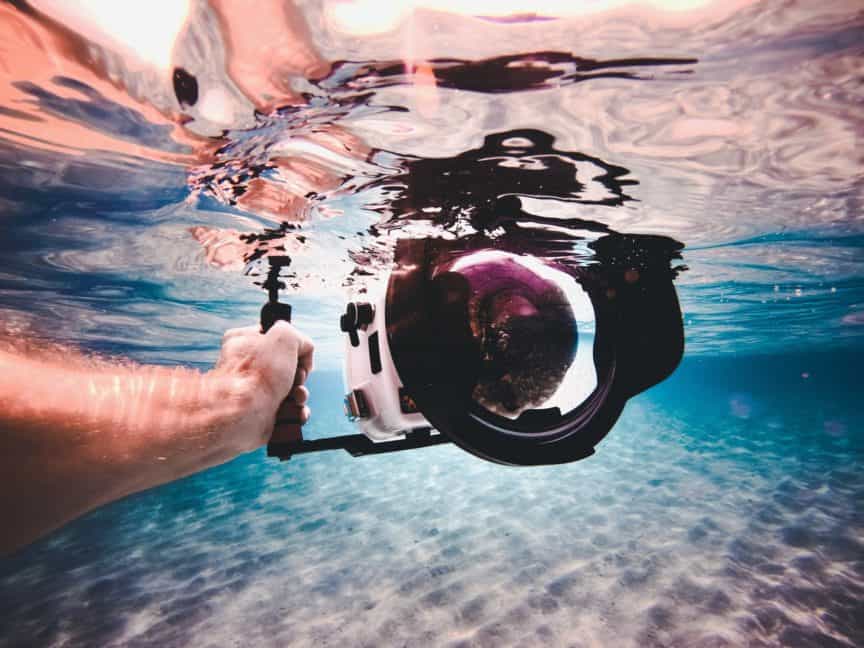 Bringing a fancy camera along on a trip is risky, especially if you plan on venturing through the rain, snow, or waves. Fortunately, there are rugged waterproof cameras out there that can handle all these things without even breaking a sweat.

If plans for your next trip include taking photos while lounging at the beach, snorkeling, or diving, then you need a camera where you don’t have to worry about water damage.

There are an overwhelming number of underwater cameras to choose from. Some are great and reasonably priced, but others are absurdly expensive and terrible quality. To save you hours of researching, I’ve put together a shortlist of the best waterproof camera options for diving, snorkeling, and other adventures in or below the ocean waves.

The Olympus Tough TG-6 sits at the top of this list simply because it’s one of the best all-round waterproof cameras. Photographers and water sports fans alike benefit from the camera’s image quality and quick auto-focus, ideal for snapping pictures of fast-moving people and creatures swimming around you.

One of the more appealing features of the Olympus Tough TG-6 is four different macro shooting modes that let you capture minuscule details far below the surface.

If you plan on taking this camera with you on a dive, it’ll go as deep as 50 feet (15 meters) underwater. Going further requires a special case, tripling the maximum depth to 150 feet (45 meters), beyond recreational dive limits. It’s also crush-, freeze-, shock-, and dust-proof, making this a seriously rugged trip companion.

Another perk of the Olympus TG-6 is that it’s one of the few waterproof cameras offering RAW image support. RAW footage gives you additional flexibility for editing images or videos if you want more professional-looking results.

If you’re more into video than still images, you’ll appreciate being able to shoot in 4k, or at up to 120fps in HD. You’ll get somewhere between one and two hours of continuous video shooting depending on how you use it, or several hundred photos.

If you’re looking for something that can endure not only water, but also kids throwing your camera around, then the Nikon COOLPIX W150 is a great option. This tumble-proof camera is perfect for family outings like rafting, ski trips, and adventures at the beach.

The playful design makes the camera easy to grip and operate, with simple controls and large buttons. When you take it underwater, it autocorrects the colors to improve the vibrancy of your shots. The camera shoots video in HD, and has built-in Wi-Fi and Bluetooth for easy connection to your phone or computer.

It’s water-resistant down to 33 feet, which is fine for snorkeling or splashing around in the pool, but not enough for diving. The Coolpix W150 will also handle a bit of rough treatment, including dust, cold, and drops of up to six feet.

It’s a little sluggish between shots and when trying to focus on nearby objects, though, and the automatic white balance underwater isn’t nearly as impressive as the Olympus TG-6. It’s also typically a lot cheaper, of course, and is ideal if you’re looking for a good, basic underwater camera that won’t break the bank.

Fujifilm’s FinePix XP140 is a lightweight, compact camera that’s perfect for tossing into your bag on the way to the beach. Despite its small size, it’s waterproof up to an impressive 82 feet (25 meters) and can handle drops of up to six feet.

The camera has a 5x optical zoom, although image quality does tend to degrade at the outer zoom limits. With wider angles and good lighting, though, images are typically better than other comparable cameras. The FinePix XP140 is good at detecting what kind of scene you’re trying to shoot, like landscape or macro, and changing its settings accordingly.

While the XP140 technically shoots at 4k, the 15fps limit makes that largely useless. You’ll get up to 60fps in HD, however, making that resolution a far better choice.

With other handy features like a “smile shutter” that automatically takes the shot when people smile, and both Wi-Fi and Bluetooth to easily transfer files to your phone or computer, this is a useful, well-priced camera that’s ideal for throwing in your bag before your next outdoor adventure.

The action camera marketing is booming with great alternatives to the GoPro. At the high end, one of the best of those is Sony’s FDR-X3000. The company strayed away from the rectangular design of other action cameras in favor of a camcorder-style look, and that choice has definitely paid off.

The ergonomic shape of the FDR-X3000 makes it easier to hold and keep steady, and the inbuilt stabilization technology built into the camera counteracts any remaining “shaky hand” problems, even when shooting in 4K.

Wi-Fi, GPS, and Bluetooth are all included, although expect to drain the battery faster if you enable them all. There’s a pair of microphones for stereo audio recording, which is a nice touch.

The camera itself is splash-proof, but you’ll need the (included) waterproof case if you want to take it in the water. This gives protection at depths of up to 195 feet, which is well beyond recreational diving limits.

This is an older model now, so it’s getting harder to find. If you can track one down, however, it’s an impressive premium underwater action camera.

If you don’t want to shell out $500+ for the latest GoPro Hero, but still want a decent action camera for underwater photos, look no further than the Akaso Brave 4 Pro. It boasts several features that’ll improve any shot or recording you take in the water, at a price your wallet will like a lot more.

Basic image stabilization is included, and you can control the viewing angle from narrow to super-wide. There’s a big range of mounts and accessories thrown in, including a wrist-mounted remote. The remote isn’t waterproof, though, so you’ll still need to use the camera buttons to change settings underwater.

The roughly 90-minute battery life is more than enough to get through even the longest dive or snorkel, and the case is rated down to 131 feet (40m). A second battery and external charger is included in the box.

You don’t get great 4k video (footage is much better in HD), though, and image stabilization is better on some of AKASO’s other models. If those are important to you, it’s worth spending a bit more on the V50 Elite model instead. If not, then save your money and get the Brave 4 Pro.

Which Would I Buy?

If you’re not using an underwater camera for professional purposes and just want to have one for fun water-based activites, I’d recommend the Fujifilm FinePix XP140. The price point and image quality in and out of the water make it a great option for someone looking for a digital camera that can withstand any environment.

However, if price is less of an issue, I’d definitely go with the or the Sony FDR-x3000. If you plan on doing deep dives, these cameras are a better option than the XP140 and offer better image quality as well.

Although these cameras are built to last, if you do purchase an underwater camera, make sure to inspect the seals before submerging it. Don’t leave it sitting in the scorching sun for too long, and resist being hard on your camera just because the packaging says it can handle falls from a certain distance.

Finally, when you bring your camera back from a saltwater excursion, rinse it in fresh water after use. This helps stop the rubber seals from perishing or metal parts from corroding, and greatly prolongs the useful life of your camera.

What has been your experience with underwater cameras? Do you have any other recommendations to add to this list?

Julia is a writer from the tech-obsessed world of Silicon Valley. When she's not busying writing in different countries around the world, you can find her geeking out about cycling, food, and design. 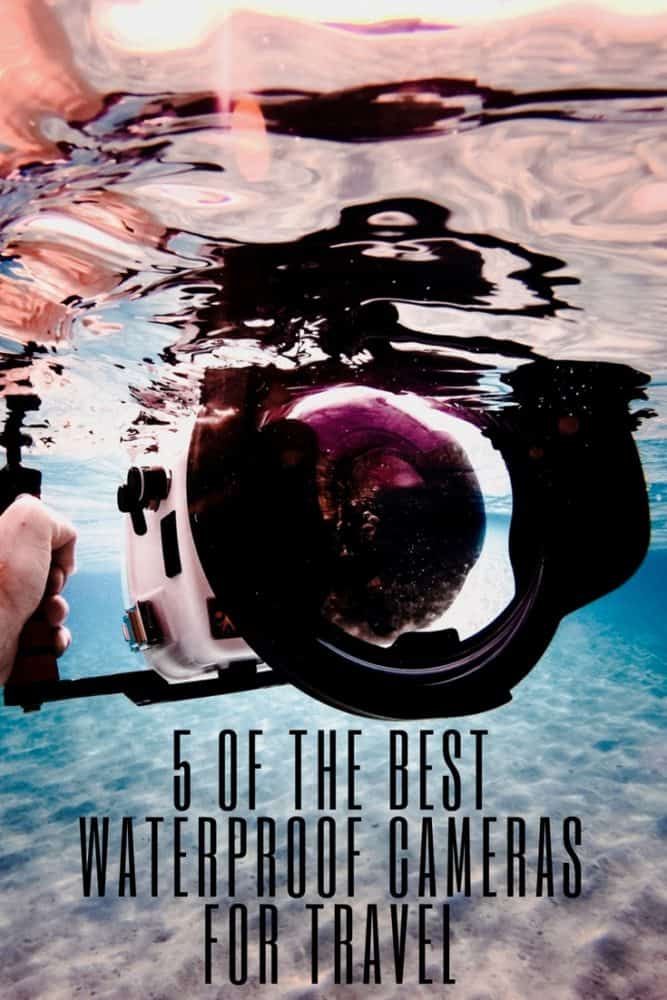