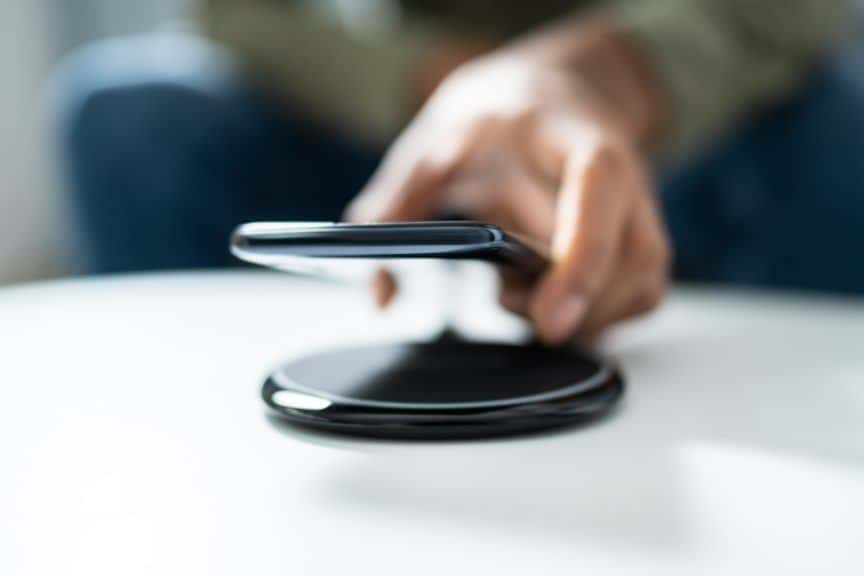 Wireless charging has taken its sweet time to improve, with few advancements in the past few years. Maximum charging speeds are still nowhere near as fast as using a cable, but it does at least provide more freedom and mobility. Simply drop your device on a charging pad and watch it charge without messing around with plugs and cords.

Qi is the global standard for wireless charging technology, and what you should look for when buying a wireless charger. This technology was already a front-runner for many years, but won the race in 2017 when Apple joined the WPC (Wireless Power Consortium), the body behind Qi charging.

While today’s iPhones are compatible with Qi technology, Apple also has its own own wireless charging tech, MagSafe. Available for the iPhone 12 and higher, it magnetically snaps your phone into the exact right place for faster 15W wireless charging. As well as charging more quickly, it also stops your phone moving around.

These are our picks for the best wireless chargers available right now no matter what type of device you’re using or where you’re using it. It includes our top overall choice, as well as a MagSafe option, wireless charging stand, car charger, and a 3-in-1 station for charging multiple devices at once.

The Anker PowerWave II is our top pick for wirelessly charging one device at a time. Depending on what you’re charging, it provides anywhere from five to 15 watts of power and is compatible with many phone models including the iPhone, Samsung Galaxy, and Google Pixel, as well as Apple’s AirPods.

The Powerwave II can charge through phone cases up to 5mm thick, so long as the case isn’t made out of metal. You also won’t be able to charge wirelessly if you have anything attached to your phone, such as magnets, a grip stand, or a credit card case. Anti-slip rings on the charger help keep your phone in place.

Charging speed depends on your device. Most Samsung Galaxy phone models can wirelessly fast charge at 10 watts, for instance, and some LG and Google phones can get as high as 15 watts. If some of all of your mobile electronics aren’t made by Apple, this is the way to go.

Unfortunately, iPhones only charge at a maximum of 7.5 watts—that’s not much better than a standard 5-watt wall adapter. As a result, if you’re buying a wireless pad mainly or entirely to charge your iPhone, you’ll be better off with Apple’s own MagSafe version (below) instead.

Apple’s MagSafe charger provides fast charging support for the latest iPhone models. The MagSafe charging ring attaches magnetically to the back of the phone, keeping it snugly in place and ensuring it can safely provide maximum power. You’ll get 15W fast charging on iPhone 13/13 Pro models and higher, and 12W on the iPhone 13 mini.

At the same time as it released the charger, Apple put out a number of Magsafe accessories, including cases in various colors and attachable leather wallets.

This charger is also Qi-compatible, so it can wirelessly charge other iPhone models (8 and above) at the slower 7.5W speed, as well as AirPods.

While Apple doesn’t directly promote the use of other phones on its charging pad, that Qi support means it should also work with most other devices that offer wireless charging. This includes Android phones like certain Samsung Galaxy and Google Pixel models, as well as accessories such as an AirPods case or Apple Watch.

There’s also a Duo version of the Magsafe charger that can charge both a phone and those accessories simultaneously.

A downside to this product is you can’t use it right out of the box. You need to pair it with a 20W USB C wall adapter, which, unless you happen to own one already (unlikely), you’ll need to buy separately. Apple unsurprisingly makes one, as do well-known third-party companies like Anker that typically cost a little less.

Whichever wall adapter you buy, just make sure it has a USB C socket and is capable of putting out 20W of power if you want fast charging.

Although the Qi wireless standard supports up to 15W of power output, most smartphones don’t try to hit that limit. 7.5W is where Qi wireless charging taps out on the latest iPhones. Most earlier models, as well as a number of other phone and accessory types, are limited to 5W or less.

With that said, if you do have one of the rare phones that supports 15W Qi charging, you’ll want a charger that can provide it. This is especially true with car chargers, where you may only have a short trip to get as much juice as possible back into your phone. That’s where the ZeeHoo 15W dash mount model comes in.

For flexibility, the ZeeHoo car charger can be mounted on the dash, windscreen, or air vent. The stand is also able to be rotated so you can easily switch between portrait and landscape mode.

In order to fit phones of all sizes, the tray position can be adjusted using the telescoping pole or by moving the bottom section of the mounting tray. The clamp automatically closes on a phone when it’s placed inside it, and you can remove it with the tap of a button on the side.

The charger auto-detects how much power the phone can handle, and automatically charges it at the maximum available speed. The mount doesn’t ship with a cigarette lighter to USB adapter, though, so if you want maximum power and don’t already have a car charger that can output at 15W, you’ll also need to pick up something like this.

Available in black or white, the Anker Wireless PowerWave II Stand is essentially just the stand version of our top overall pick. That means it provides the same 5-15W of power to a wide range of devices, just in a stand-based format instead of a charging pad.

Plugging directly into a wall outlet comes with pros and cons: it’s arguably less convenient when traveling overseas, but moreso around the home: there’s no need to buy a separate USB charger, for starters.

The stand doesn’t come with any clamps or magnets, so you do need to be a little careful not to knock your device off if you accidentally nudge it. You can charge with your phone in either portrait or landscape mode, handy when you’re watching a show and want to avoid draining your battery in the process.

Note that due to the relatively slow (7.5W) iPhone charging speed, you’ll be better off with Anker’s MagSafe-compatible PowerWave 2-in-1 Stand Lite instead if you’re an Apple phone user. That’s especially true if you’ve also got a pair of AirPods, since you can charge both of them at once.

The Belkin 3-in-1 wireless charger can charge an iPhone, Apple Watch, and AirPods case all at once. If you have several devices that support wireless charging and don’t want to have multiple chargers on your nightstand, this may be the best design for you.

The Belkin dock charges iPhones at 7.5W and Airpods, Apple Watch, and other small Qi-compatible devices at 5W. It’s straightforward to use: all you need to do to start charging is set your devices down on it. If the indicator light turns on, it means you’re charging. You can’t turn the lights off, unfortunately, which isn’t ideal if you set the charger up beside your bed.

Although it’s convenient for wirelessly charging multiple devices, it’s a bit on the bulky side. 3-in-1 chargers like this are ideal for sitting on a desk or on a bedside table, but they don’t travel all that well, so you’ll need an alternative when away from home.

You can technically use this charger for non-Apple devices as well, but the MagSafe-focused design limits your phone options a lot. There’s a non-MagSafe version that has a more generic stand design, but even so, make sure your phone, smartwatch, and wireless earbuds case will all fit in their intended spots before you commit.

If you have an iPhone 12 or higher, remember to look for MagSafe compatibility if you want to be able to charge your phone at its full 15W capability. For everyone else, just make sure that any charger you buy supports the Qi standard.

Also consider where you’ll be using the charger most, and how many different devices you own that can be charged with it. This will help you decide whether you want a flat pad, a stand, a car charger, a multi-device charger, or a combination of all of them! 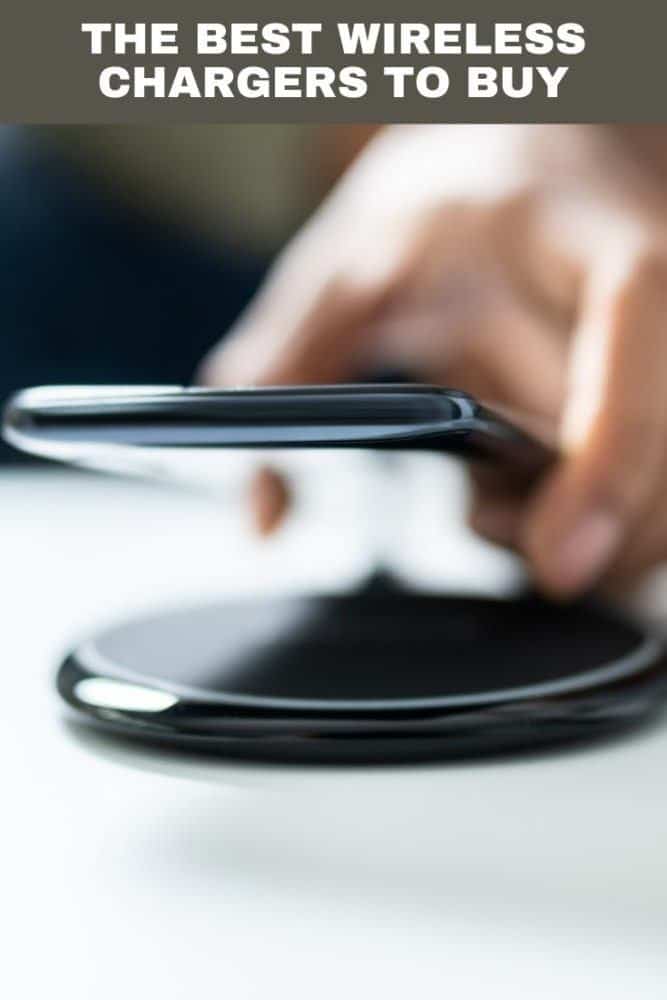