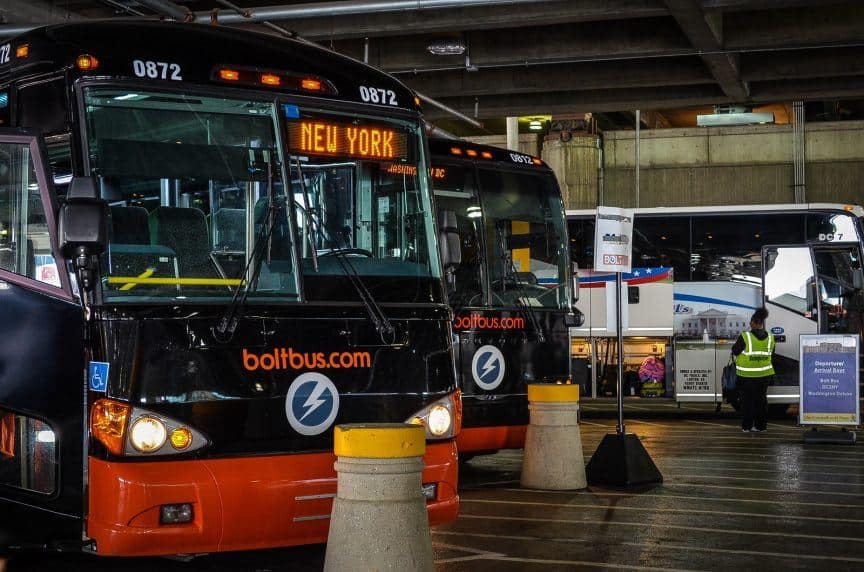 Sadly it looks like Bolt Bus has bitten the dust as of July 2021, ending service on all routes. Parent company Greyhound says Bolt is suspended rather than dead, but with no timeline for revival, the result is the same right now.

A bus isn’t the first mode of transportation that comes to mind when you think of technology. In my mind, it goes something like this:

So when I heard of a new bus outfit called Bolt Bus doing a route in the Pacific Northwest of the USA between Portland, Seattle, and Vancouver, Canada, with free WiFi and AC outlets onboard, I thought it might make for a good opportunity to catch up on some work.

Working on the Bolt Bus: My Experience

Right on time, the slick-looking, red & black bus arrived in downtown Seattle outside the International District / Chinatown light-rail station. After I gently placed my main bag in the storage underneath, I hopped on the bus and picked a seat.

Kelvin, the friendly driver, introduced himself and told a few jokes to loosen up the crowd before mentioning that the router needed rebooting, and the inverter on the right side of the bus for the AC outlets was on the fritz. That would be my side. Not the end of the world though, as the bus was less than half full and I could move if I really needed an outlet.

The seats were comfortable, leather, and offer what I would assume is decent legroom. I’m short so you’ll have to take my word for it, since I can only eyeball the potential legroom for taller guests. AC outlets are available on the backs of most seats (provided they’re working).

One glaring omission that quickly became apparent was the lack of a fold-up table tray like the ones you would find on an airline.

How Is the Bolt Bus WiFi?

With a start of the engine, the “Bolt Bus” network name came alive. No access on my Galaxy Nexus smartphone, and only one bar on my laptop told me that the router’s signal strength was weak.

So weak, in fact, that it took about 15 min to connect the first time, and dropped out every few minutes. I was sitting in the middle of the bus, and everyone I could see had put away their laptops and smartphones by this point.

The connection doesn’t require a password, meaning it’s unsecured. This leaves your internet connection, including web traffic and logins, open to snooping. I would highly advise you to use a VPN to secure your connection on any unsecured wifi hotspot, including on the Bolt Bus.

The connection dropped in and out as we went, and besides a few tabs open for research, Facebook, and Gmail, I didn’t try for much, scared I might clog the tubes.

With the bus nearing my Portland destination, I feel I can wrap up the review. My suggestion, don’t book the Bolt Bus expecting to get much work done.

It was barely good enough to warrant keeping my laptop on to work. Worse than that though, is the pain in my neck (literally) from looking down to my laptop screen that has to sit on my lap.

No table tray makes for an unhappy body, and now I’m slouching so I don’t need to look down quite so far. Guess I’ll trade some of that neck pain for back pai

A trip on the Bolt Bus is cheap though. Fares start from $1 if you book early enough, and mine was $15 a few days out. That’s less than 1/2 of a ride on the Amtrak train, and a fraction of a flight.

Unfortunately, besides a great price, Bolt Bus doesn’t necessarily offer much for the traveler with tech. If you want to check your email and you don’t have a data connection on your phone, I’m sure it will suffice, but heavy workloads just aren’t an option unless you enjoy chronic neck pain.