The home of bungy jumping, hobbits, and the famous All Blacks, New Zealand’s laid-back culture and stunning natural beauty make it a huge hit with overseas visitors. Until fairly recently, though, those visitors have been less impressed when it came time to get online.

With expensive, slow Wi-Fi the norm even in hotels and cafes, plus high prices and tiny data allowances on most cell plans, staying connected in the country used to be a costly, frustrating exercise.

Things are changing, however. The rollout of fibre networks and unlimited broadband plans is (slowly) helping the Wi-Fi situation, and a little competition has helped bring prices down in the cellular market.

While you still won’t be amazed by the cost or coverage, things are much better for international visitors than they were a few years ago. Here’s what you need to know.

Got travel insurance for your New Zealand trip yet? A good policy can cover you for all kinds of sticky situations, from medical emergencies to canceled flights, theft, lost luggage, and more. We've been using World Nomads for over a decade.

There are three mobile networks in New Zealand. Spark and Vodafone have the largest networks, both covering around 98% of the population. 2degrees has a smaller coverage area, but customers roam for free on the Vodafone network as needed.

Don’t expect to get service everywhere regardless of which network you’re on, however. The country’s geography and lack of population density leave plenty of blank spots on all networks.

Competition is limited between the three companies, with similar, fairly-expensive prices across the board. Little differences help swing the balance one way or another.

If you’re flying in from overseas, you may be able to save a bit of money with Vodafone. In the duty-free area at Christchurch, Auckland, and potentially other airports, you can pick up the company’s NZ Travel SIM at tax-free prices. This means you won’t pay the 15% GST on whichever package you go for.

Spark’s call, text, and data offering for tourists is similar to Vodafone’s, but it also throws in 1GB of free Wi-Fi per day from any of its 1000+ hotspots around the country.

Mostly found in phone boxes in tourist areas, and with decent free Wi-Fi still comparatively hard to come by for tourists, you may find yourself using those hotspots more than you expect.

Spark also owns the Skinny brand, which offers competitive pricing for prepaid users, especially those who use a lot of cellular data. Utilising the widespread Spark network, with a slick website and app that makes life unusually easy for international visitors, it’s definitely a good option.

I’ve used SIMs from all of the providers on different trips, most recently Vodafone and Spark.

How to Buy a Prepaid SIM Card in New Zealand

If you’ve got a New Zealand address to use, you can order a Skinny SIM online and have it delivered within a day or two. If not, you can pick one up at most supermarkets, plus large stationery and electronics stores and other retail chains in every city and decent-sized town throughout the country.

With family in New Zealand, I opted for the online ordering option. I needed to pick a call and data package along with the SIM when placing the order, and the kit arrived the following day.

After inserting the SIM, I dialed ‘456’ to activate it. No passport or other identification was needed.

The Skinny website is slick and easy to use, and in a welcome (and rare) move, lets you top up using an international credit card without issue. There’s also a comprehensive Android and iOS app, which I used to select a package and monitor my usage throughout my month in the country.

After arriving on an international flight at Christchurch Airport, I noticed kiosks selling Vodafone and Spark tourist SIMs prior to passport control.

Stopping to take a look, the Vodafone attendant mentioned that because no tax was being charged there, the packs were 15% cheaper than in the arrivals hall or elsewhere in the country. That was good enough for me! Oddly, the Spark SIM cards being sold nearby weren’t similarly discounted.

She installed the SIM in my phone, checked it worked, took card payment, and sent me on my way. The process took all of about three minutes.

Vodafone stores are also available in the duty-free area at Auckland airport, plus the main arrivals area at Auckland, Wellington, Christchurch, and Queenstown airports, and in towns and cities around the country.

As mentioned above, there was a Spark kiosk a few metres away from the Vodafone one at Christchurch airport, just prior to the baggage reclaim area. Spark also has stores at Auckland and Wellington airports, and like Vodafone, you’ll also find them in towns and cities all over the country.

To ensure at least one of us would have coverage in most parts of the country, my partner bought a Spark SIM while I was buying my Vodafone one. The process was very similar, and took almost exactly the same length of time.

Online ordering to a New Zealand address is available with both Spark and Vodafone, and you’ll also often see their tourist SIMs being sold in supermarkets, petrol stations, and elsewhere. In short, you’re not going to have a hard time getting hold of one!

Can't be bothered with the hassle of buying a local SIM in New Zealand? OneSIM topped our international SIM card comparison.

Just like Spark and Vodafone (below), Skinny offers a travel SIM option. For $28, you get 2GB of data, 200 texts and minutes to NZ, Australia, and several other countries, valid for 30 days.

If you don’t want to go with the travel SIM, Skinny’s standard call, data and text packages renew every seven or 28 days. While you can get a basic monthly package for as little as $9 NZD with unlimited texts, 100 minutes of calls and 250MB of data, the best value is in the larger packs.

I went for the $46 NZD 4-week ‘Ultra Combo’, with unlimited calls and texts to New Zealand and Australian numbers, plus 12GB of data that rolled over to the following month if not used.

If you need more data, you can buy ‘add-ons, ’ where an extra 1GB costs $10 NZD, or 2GB for $15. Skinny also has an interesting “binge” option, where for a few bucks, you can buy up to 12 hours of unlimited data on top of whatever package you’re using.

That’s particularly useful when you find yourself somewhere with no, unusable, or expensive Wi-Fi. That still happens more often than you’d hope. If you’re a particularly heavy data user, Skinny also offers a plan with “unlimited” calls, texts, and data for $77. Speeds will be reduced after 40GB, however.

Note that not all add-ons work with the cheaper packages, so check this page for details. It’s unnecessarily restrictive in that regard, but the long and the short of it is that you’ll typically get more for your money with Skinny than other providers.

It’s always worth checking the site for promotional offers, as they change regularly.

For $29 with Vodafone, you get 1.5GB of data, 200 minutes and texts to New Zealand and several other countries, and free use of chat apps such as WhatsApp and Facebook Messenger, valid for a month.

The best value, however, comes in the $59 and $99 packages, which give 10GB or 20GB of data, unlimited domestic calls and texts, and those unmetered chat and social apps.

With Spark, $29 gives you 1GB of data, 200 minutes and texts within New Zealand, plus 100 international calls and 50 international texts to various countries, valid for 30 days.

The $49 package ups the data allowance to 5GB (plus 1GB extra for Facebook, Facebook Messenger, Twitter, and Spotify), adds more international calls and texts, and is valid for 60 days.

You’ll get 10GB of data for $59, and 25GB for $89 — other than more international texts, everything else stays the same. There’s also a 50GB data-only option available for $129, valid for three months.

While most of the included international calling and text destinations are the same for both companies, there are a few differences. Check the exact details beforehand if you plan to call or text back home.

As mentioned earlier, you may be able to save 15% on the Vodafone SIM if you buy it before going through immigration, and you’ll get that 1GB of free Wi-Fi per day from branded hotspots with Spark.

Both companies have apps to track usage and more, although neither is particularly good.

You can top up using a voucher, or with a credit card on the Skinny site. As mentioned, international cards work fine.

Vouchers are available anywhere you see the Skinny logo. There are 6000+ retail outlets across the country, so you’ll find one almost anywhere you’re likely to be. Once you’ve got a voucher in hand, you can add the credit via the app, website, calling ‘204’ or dialing *888#.

Since most visitor SIM packages last two months, you may not need to top up unless you’re on a particularly long trip, or burn through your data, calls, or texts.

If you do, you’ll need to choose an add-on pack containing more of whatever you need. To do so, add credit either by purchasing a voucher from anywhere displaying the company logo or via the Vodafone or Spark website.

Once you’ve loaded credit onto your account or pre-registered a debit or credit card, you can then select an add-on via the app or by texting a specific code.

Note that once the initial validity period is up, you can’t renew the call/text/data packages with either company. The SIM card is still active, however, and you can buy add-ons to keep you going a bit longer.

Check out the list of available add-ons for Spark here.

Data speeds were good, even in relatively small towns. With Skinny, I consistently got 3G speeds of around 8Mb/sec, and over 50MB/sec with LTE. With Vodafone, I got LTE speeds of over 100 Mbps at times.

On all networks, cell service often disappeared while driving between smaller destinations and when hiking on several trails throughout the South Island. As mentioned, you won’t get 100% coverage with any provider in New Zealand, especially in more remote areas. 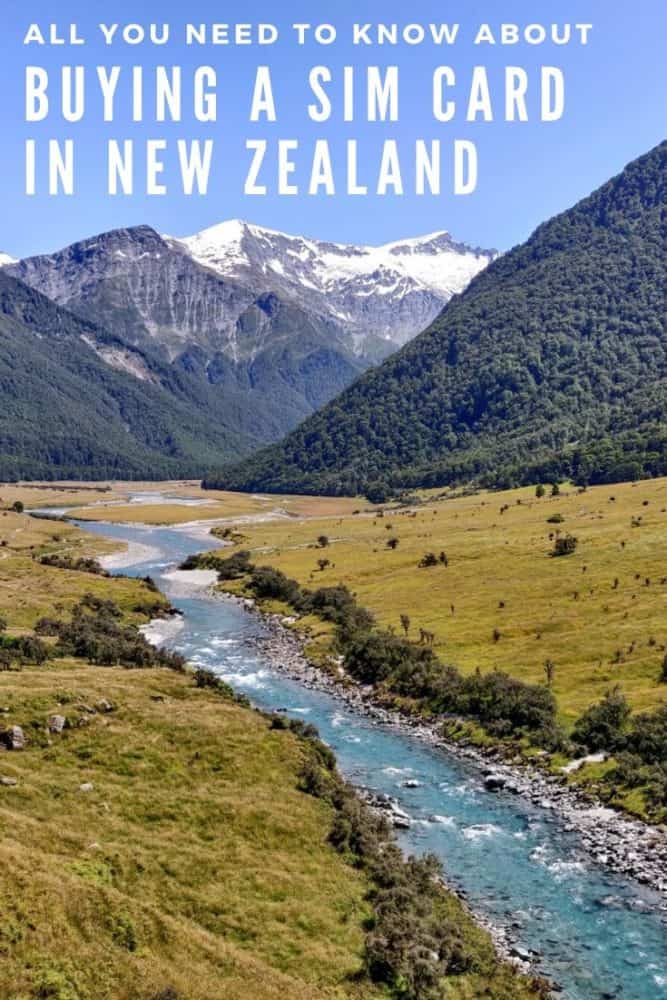