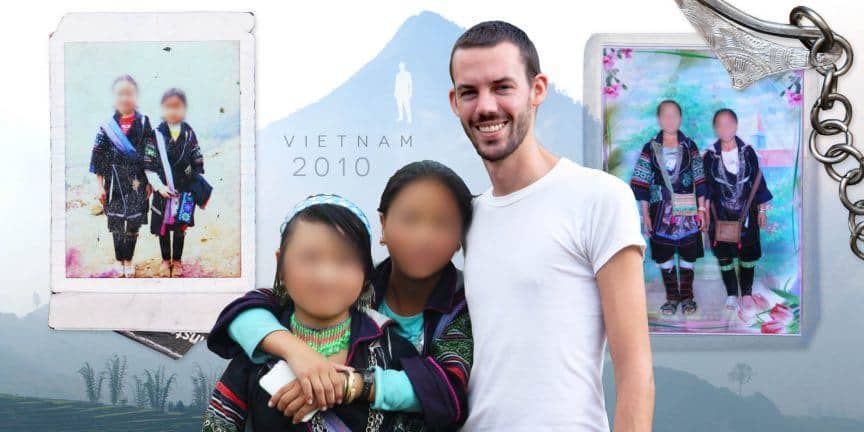 Ben Randall was born and raised in Australia, where he worked in documentary film production before falling in love with travelling.

He’s spent over ten years living and working around the world, including five years in Asia.  While there, he began a photography project called “The Human, Earth Project” to search for 100 strangers across 10 countries in 10 months to raise awareness of human trafficking.  It was during that time he undertook a journey to find two of his friends who were believed to have been trafficked into China as brides.

He filmed that journey and the incredible story that unfolded for the upcoming documentary film “Sisters For Sale.”

Ben shares his story about how it came to be, and that gear that it takes to film a documentary from a backpack.

How did ‘The Human, Earth Project’ come about?

In 2010 I was teaching English in Sapa, in the mountains of northern Vietnam. There was a small group of teenage Hmong girls who would sit on the corner of my street, selling treks and handicrafts to tourists. I saw them every day, and we became friends.

Within the next two years, five of those girls were kidnapped in separate incidents. They were believed to have been trafficked into China to feed the demand for brides and prostitutes. The Chinese one-child policy, and a preference for sons, has led to a shortage of tens of millions of women there.

“Human trafficking” suddenly became very real, and very personal, to me. I decided to go back to Asia to try and find my friends, and do whatever I could to raise awareness of the global human trafficking crisis. “The Human, Earth Project” was born.

Tell us the crux of how “Sisters For Sale” came to be.

Teenage girls are being taken from Vietnam in their thousands, and they need all the help they can get. I decided to use my skills as a documentary filmmaker to raise awareness of their plight, so I took a cameraman with me to film my search.

There is always an unpredictable, uncontrollable element to documentary filmmaking, and we stumbled into a much bigger story than I’d ever expected. Against all odds, I actually succeeded in finding two of my friends in China, and the story just snowballed from there.

The story took some wild twists and turns, and we rode it to the end. Instead of three months, the shoot lasted over a year. I’m now editing all that footage as a feature documentary, “Sisters For Sale.”

What gear did you use to film and record “Sisters For Sale?”

Filming “Sisters For Sale” involved going up against local mafias in countries where we couldn’t even speak the language. It was dangerous work, and our priority was staying alive to finish it, so we had to pass as tourists.

Since the documentary came second to the actual search for my friends, we had to stay flexible and be able to film or relocate at a moment’s notice, so I wanted only the bare minimum of equipment. We had a very limited budget, too.

The Canon 70D was released less than a week before we started filming. It seemed to be Canon’s first mid-level camera designed with a strong emphasis on video. I was intrigued by the faster, sharper Dual Pixel focusing system, which didn’t disappoint. The flip-out touchscreen, which at first seemed gimmicky, proved invaluable.

Because of the nature of our work, I wanted to find one general-purpose lens to have ready on the camera at all times, rather than having to switch between several. The 70D body was available bundled with an EF-S 18-135mm f/3.5-5.6 IS STM lens, which was perfect for our needs and budget.

We took two camera kits, protective UV filters, extra batteries, tripods, a no-name chest brace, a pair of camera-mounted Røde VideoMics with DeadCat Wind Muffs , and a Røde SmartLav lapel mic for interviews (which recorded directly to my iPod Touch). My cameraman brought some extra lenses, and that was it.

What did you learn while filming on the road for months that you’d do differently? Different gear?

For such a long shoot involving so much hard travelling, it all went amazingly well. We never had any major camera troubles. Other things – storage cards, batteries, chargers, filters, tripods, mics, etc – were inevitably damaged, and repaired or replaced along the way.

My cameraman was a Nikon man, and I used Canon. One of the best decisions I made was getting us both on the same system, so we could swap batteries, cards and lenses easily. We each spent a long time trying to win the other over to our preferred system, ultimately choosing the Canon 70D over the comparable Nikon D7100 for its video features.

Of course, both are excellent brands, and either one would have been fine. Having an “eye” for a good image and an understanding of the basic principles of photography is more important than button placement and other minor details. It doesn’t take long to adapt to a new system.

I was very careful about backing up footage to multiple sources, which paid off when some of our hard drives were damaged during long journeys on bad roads. Next time I’d choose my tripods more carefully and take an extra lapel mic, but that’s all.

In the pre-shoot rush, I didn’t have a chance to look closely at tripods, and mail-ordered a lower-end Manfrotto based on brand reputation. Despite claiming to be a “photo/movie” tripod, it lacked the smooth head action needed for shooting video.

We ultimately used four different tripods on the documentary, with two damaged during travel. The best of all, surprisingly, was a no-name tripod we picked up in China for $60.

The other equipment I’d considered – a GoPro, silver/white light reflectors, lightweight dolly rails – really wasn’t necessary, and I’m glad we went without it.

For someone looking to edit their first short films, where should they start?

This is a tough question, and really needs a full article to do it justice, so I’ll only skim the surface here. In terms of hardware requirements, it really depends on what you’re editing. In general, it’s better to spend the extra money than to get stuck with a machine that can’t keep up.

In “Sisters For Sale.” for example, I’ve blurred a lot of faces to protect identities. At one point in the film, I’m using 25 or more video layers, many of which are being processed simultaneously using masks and basic effects – colors, contrast, saturation.

Add in titles, transitions, and several audio tracks (some filtered), and you get an idea of the processing power I need for real-time playback, but your own requirements may be very different.

Regarding software, I’ve worked with several big-name editing programs, and I’m not going to recommend any one particular program here. As with camera systems, what really matters is not the software but your own skill and experience. The greatest software on the market won’t make you a great editor: it takes time and practice.

Good editing can be tedious, but makes a great difference to a finished film. If you’re also directing, you’ll find that a basic understanding of editing will also improve the way you shoot footage. With practice, you’ll be able to visualize the edit even before you’ve filmed the scene.

What have you learned from using crowdfunding to fund your projects?

Crowdfunding is hard, but it can also be a great way to get the funds and attention you need. It’s a very complex game: I’ve now raised over $50,000 in three campaigns, and am learning continually.

Once you get beyond your friends, family and core supporters, you’re competing for attention with the entire Internet. Get your team right. Get your message right. Keep it short and sharp. Spend as much time as you can working on your campaign before it launches, let people know it’s coming, then get it out to as many people as you can.

“Human trafficking” is not glamorous, and it’s not an easy thing to sell. Much of our success has come from identifying the people who care most about our story (predominantly younger women) and tailoring the campaign to them.

What do you think the future looks like for aspiring filmmakers and storytellers?

Right now is an extremely exciting time for independent filmmakers, especially documentary filmmakers. There’s never been a better time to get started.

Digital technology is low-cost, high-quality and highly accessible. My initial outlay for production equipment was under $4,000, which is phenomenal.  This was in 2013, but you can get an idea of what a current setup would cost as well.

In addition to the above, I already had my laptop, a good pair of headphones, and an iPod Touch for recording audio. I bought a series of 1TB and 2TB external hard drives to store the footage we recorded. Over such a long shoot, and keeping duplicates of all files, these ultimately cost $1,000 or more.

Putting digital technology into so many hands means a lot more films being made, a lot more competition for filmmakers, and a lot more choice for consumers. Mediocrity won’t get you anywhere. Learn your craft. Get your story, and your visuals, right — or forget about it. 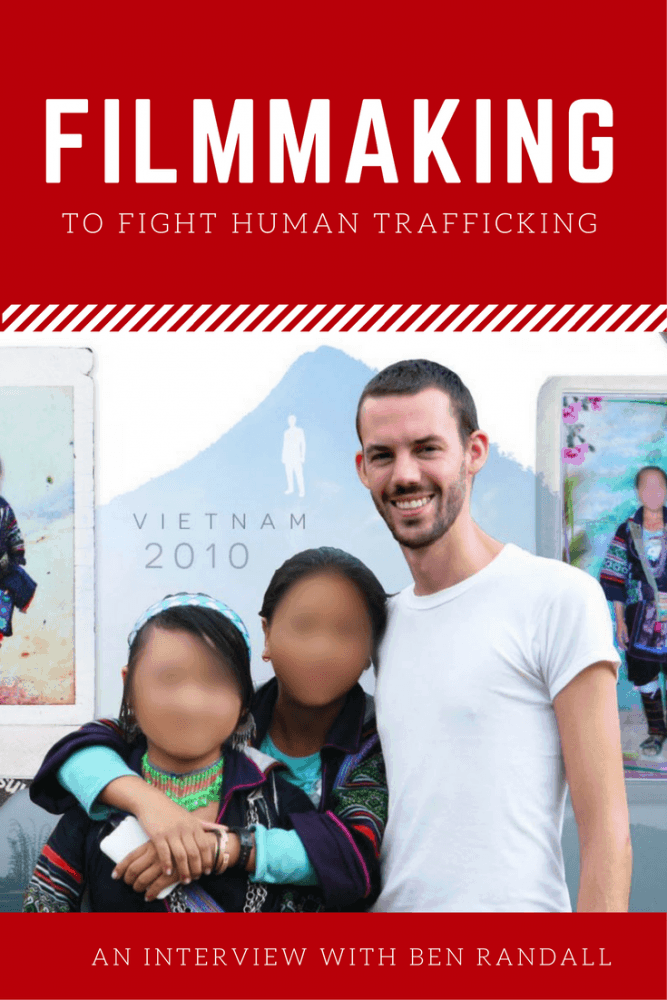