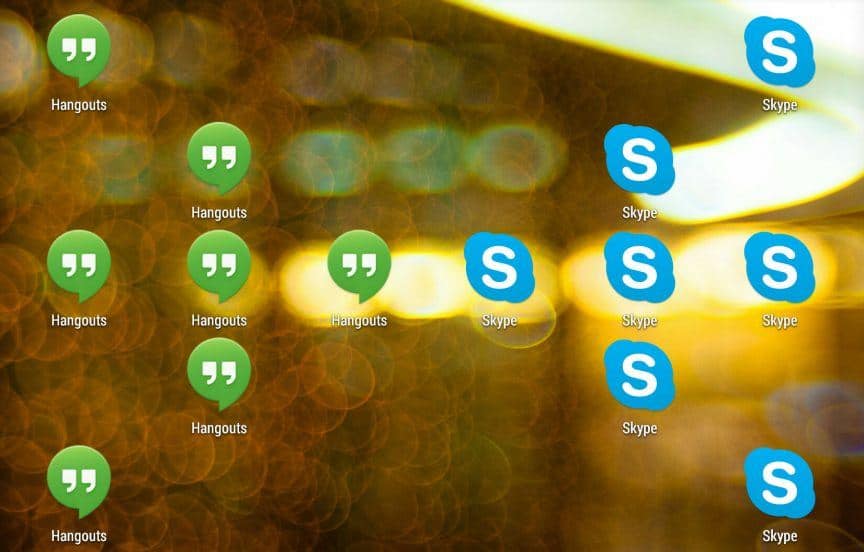 For the longest time, Skype has been the go-to way for making calls online. It’s become such a big part of the way we communicate that it’s even turned into a generic word covering all online voice and video chat, just like xerox, band-aid, and jello.

Not bad for a piece of software just over 11 years old. Sometimes being first means a whole lot, and that has been a big part of Skype’s success. In the past few years, Google has been trying to take the wind out of Skype’s sails, and with the latest release of Hangouts it has a new weapon in the battle.

While both offer (and are best known) for video calling, we’re going to be talking about making calls to regular ‘ole phones via the apps.

With the new version of Hangouts on Android release earlier this month, it now joins iOS and Chrome in having the ability to make free voice calls to phone numbers in the USA and Canada right from the app.

That means as long as you have Wi-Fi or a data connection, you’ve got no-charge calls from anywhere in the world to USA/Canada. Calls to other countries have a small charge.

If you’re an Android user, you’re going to need to install two apps to get the dialing functionality. First, grab the Hangouts app, and then the aptly named Hangouts Dialer.  Once installed, you’ll likely have an icon for each, but you only need one. Both of them will do the same thing.

Without the hangouts dialer, you’ll be missing the last tab on the right side of the app.

With Hangouts on iOS, you only need the Hangouts app, and the dialer is built in.  You’ll have to grant Hangouts access to your contacts if you want to call them, otherwise just use the number pad.

It’s easy to make a call right from your Gmail account. In the left-hand pane below your labels, you’ll find the Hangouts area.

To make a call, click the search icon to bring up a list of your contacts, and then the phone icon to bring up contacts with phone numbers, and the number pad. If you have credit, it’ll show the amount remaining.

There is also a Chrome extension available for Hangouts that will put a Hangouts icon in your system tray as well. This is great if you would rather have a more chat-like interface available on your desktop to always having to open your Gmail for access.

In addition to offering free calls in the US and Canada, Google is being very aggressive with their international calling rates as well.  Not only that, but the pricing with Hangouts is much simpler than Skype, with no connection fees to add.

Here’s a look at a few popular countries and how they compare with Skype.

You can add credit through a Google Wallet account in $10 increments, though it appears that you can only do it on the desktop at the moment.

I’ve found that the first few seconds of a call can be a little dicey, but after a couple of seconds you’re good to go. In my experience, it might not be something you want to be using for business calls to new clients who aren’t expecting the odd glitch from someone potentially on the other side of the globe.

Compared to Skype, I’ve found that there is less of the glitchy-type sound that we sometimes associate with Skype during a call. Essentially, if you can get past the first couple of seconds that might be a bit iffy, you’re set.

Calls on both Wi-Fi and 4G were pretty great. It’s not quite the same as a call between two landlines in terms of quality… but who makes landline-to-landline calls any more anyways?

What do you use to make calls when traveling?