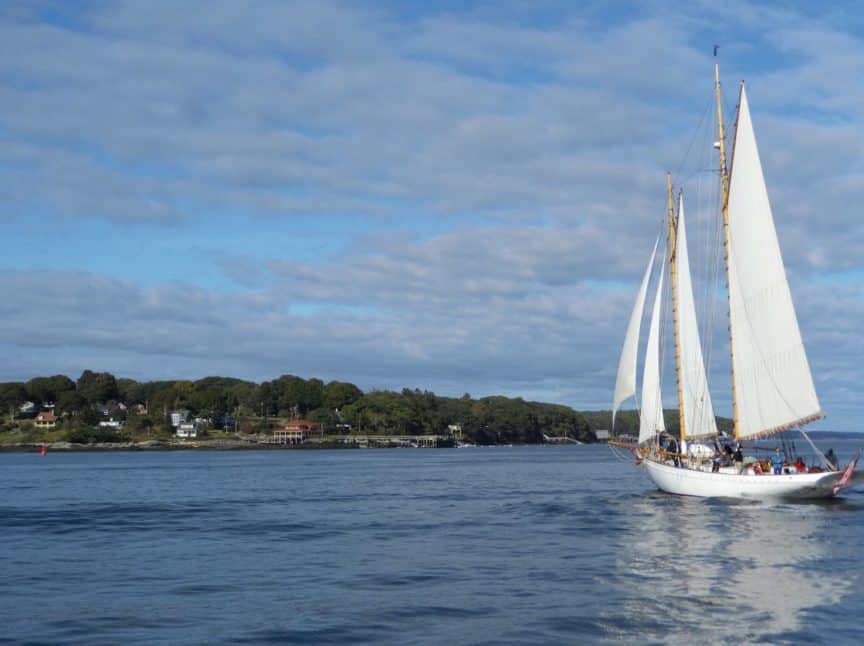 I kept putting it off. The store will be too crowded. I’m too busy. Maybe tomorrow, I’d tell myself. The truth was I wasn’t mentally prepared for such a monumental shift in my life. I was going over the wall, switching from Apple to Android, and I suddenly couldn’t seem to loosen my grip on my rose-colored iPhone 6s.

Once I finally made that leap, though? It turned out breaking up wasn’t so hard to do.

I’d been a Mac and iPhone person from day one, except for the short period of time I was forced into the Windows world by a temporary job. My computer might as well have been in German, it felt so foreign to me. I left that job for many reasons, but using that machine was definitely one of them. I joyfully returned to my all-Apple existence.

As cameras improved on other manufacturer’s models, though, I became less enchanted with my iPhone. I’d upgraded to a 5c thinking I’d get a better camera. I didn’t. While Android friends were snapping clear, sharp photos even in low light, mine were blurry or washed out. Even then, I didn’t seriously consider switching from Apple. My holy trinity remained: iPhone, iPad, MacBook.

As a travel writer, though, I’m sometimes given products to test out. That’s how, a few years later, I found myself in Maine, Motorola’s Moto Z Force smartphone in my hand. It came with fun attachments like a speaker and a projector, but the one that won my heart was the Hasselblad True Zoom camera.

Let’s just say it upped my meager photography skills dramatically. I’d swapped that iPhone 5c for a 6s, and though my shots had improved as a result, it was nothing compared to this. My photos were suddenly crisp and clear, and I was thrilled. I took a particularly good photo from a moving boat off the coast during that trip, and it ran with my story in a national travel magazine.

So it was time for the big switch, right? Well, not quite. I was still locked into my phone contract for another year unless I wanted to shell out big bucks to buy my way out. So for a whole twelve months, I carried two phones around – hardly ideal for a travel writer who likes to travel light. My Moto Z for photos, my iPhone for everything else.

Eventually, the big day arrived. The switch was complicated by the fact I couldn’t stay with my current carrier, Sprint, as they didn’t support the first edition of the Moto Z Force. I didn’t realize not all carriers support all phones.

While all T-Mobile and AT&T devices can move fairly freely between carriers, Sprint and Verizon devices are more limited. If you’re based in the US, you have to do a bit of research if you plan to BYOP as they call it – bring your own phone.

After researching which carriers I could use, and finding out my only option was Verizon, I headed in to cut the cord.

The switch was easier than I thought. The nice Verizon lady helped me switch my phone number over, but what about the rest of the content? Enter the Content Transfer app. I went home, downloaded the app on both phones, and followed the prompts. After choosing what I wanted to move, just about everything went straight across from my iPhone to my Moto Z.

As for apps, I generally just downloaded the Android versions of what I’d been using on iOS and signed in. All my favorite travel apps, including Gate Guru, Waze, and Tripit, still had all my details. I still had all my notes safely inside my favorite work app, Evernote, and of course all the social media apps worked just the same.

That part was easy. A few other things, though? Not so much.

The Hard Part of Switching from Apple to Android

To start with, all my Lightning cables weren’t so useful anymore. I’d amassed a pile of them, along with the charger in my car. They still work with my iPad, I guess, and since my husband is still a loyal Apple man, he’ll get some use out of them too.

I now only had one phone charger, and after leaving it in a hotel room in North Carolina, found that for some strange reason USB-C cables were sold out in every store I tried. Great. In the end, I gave up and ordered a few online, which took two days to arrive.

I also ordered another TurboPower charger to replace the one I’d left behind, since it had worked so well. When I’m on the road I sometimes only have about 15 minutes in my hotel room before I need to head out again, and that charger adds a lot of extra juice in a short time.

Fortunately I still had the car charger I’d purchased, so until the new cables showed up, I just had to drive around juicing up my phone every so often. Not ideal, but it worked in a pinch.

The two hardest parts about switching for me were about communicating with others. Kinda ironic given the original purpose of a phone, right?

I Didn’t Know How to Answer the Phone

Aw, the embarrassing admission that at least some of the time, I couldn’t answer my new phone. Sometimes when a call came in, a message would pop up with an option to answer it. Other times, though, there was a vibrating circle with a red phone on the left, and a green phone on the right.

I pressed all of these. Nothing happened. At least setting up my voicemail had been easy enough, so on the very rare occasion the call was important, they could leave a message.

I sheepishly tried Googling “how to answer my Moto Z Force phone.” Google laughed at me. After a few days of feeling like a world-class idiot every time I got a call, my son happened to be around when it rang.

He pressed his finger to the vibrating circle, and moved it to the green phone without a second thought. The call connected. Because of course it did.

I didn’t feel any less like an idiot, but at least I could now answer my phone.

I Couldn’t Get Texts on My Laptop

When I’m not traveling, and sometimes even when I am, I’m glued to my laptop. It’s so much easier and faster to answer texts on it than to stop, find my phone, and type a response. That’s something I’d done all the time with the Messages app on my MacBook… but it only works with iPhones.

I did some research, and finally found an alternative approach. Called Mighty Text, it’s an Android app that pairs with a Chrome extension, making it easy to send and receive messages in my browser. The free version is enough for me, although you can pay a few bucks to unlock extra features.

I did miss several texts at first, though, because people would open previous texts to respond on that thread, and the new messages weren’t delivered to my Force — I’d only see them much later on my iPad. This is a common problem for people switching from iOS to Android, thanks to the way iMessage works.

In the end I just had to ask people to start a new thread when they texted me, and messages would come through fine after that.

What I Miss About My iPhone

I really liked my Podcasts app on my iPhone. I have the CastBox app on Android, but don’t find it as user-friendly. Pocket Casts has been recommended to me instead, and since it’s now free, I’ll be checking it out shortly.

I also miss my headphone jack, as the Moto Z Force doesn’t have one. I have the adaptor that plugs into the charging port, but I can’t ever seem to find it when I need it. To be fair, the latest iPhone models don’t have a headphone jack either… but that doesn’t stop me wanting it!

I didn’t really use FaceTime much, so don’t miss it, and can use Google Hangouts or Skype instead if I need to do a video chat on my phone.

What I Don’t Miss About My iPhone

As I mentioned, I don’t miss the camera, and I don’t miss how fragile iPhones are. Fortunately I never cracked the display on mine, but several of my friends haven’t been so lucky.

The Moto Z Force is supposed to have a guaranteed shatterproof screen, and I’ve unintentionally tested that out a few times. So far, so good – there’s not a scratch on it. This guy decided to go several steps further, including dropping the phone off his roof, and it still survived just fine.

I thought I’d miss iTunes, but I usually listen to music through our Sonos system at home, and of course there’s an Android version of that app. I like Google Play Music that comes with Android as well, although since I haven’t subscribed yet, my music comes with ads.

Overall the switch was easier than I thought it would be and it’s been a great one for me. My phone is now the only camera I carry. It takes great photos by itself, and I use that Hasselblad zoom lens when I’m aiming for a really killer shot.

I still remain loyal to Apple in some ways. I’ll confidently say you’ll never see me on a Windows PC, and my iPad goes everywhere with me. Even so, my holy Apple trinity has had a substitution, and Android now plays a daily starring role.

Would I ever switch back? Maybe, if some amazing new iPhone upgrade comes out one day. But for now at least, I’m happy the Force is always with me.

Jan Schroder is an award-winning journalist and Atlanta-based freelance travel writer. She is also the publisher/founder of Girl on the Go. Follow her on Twitter and Instagram. 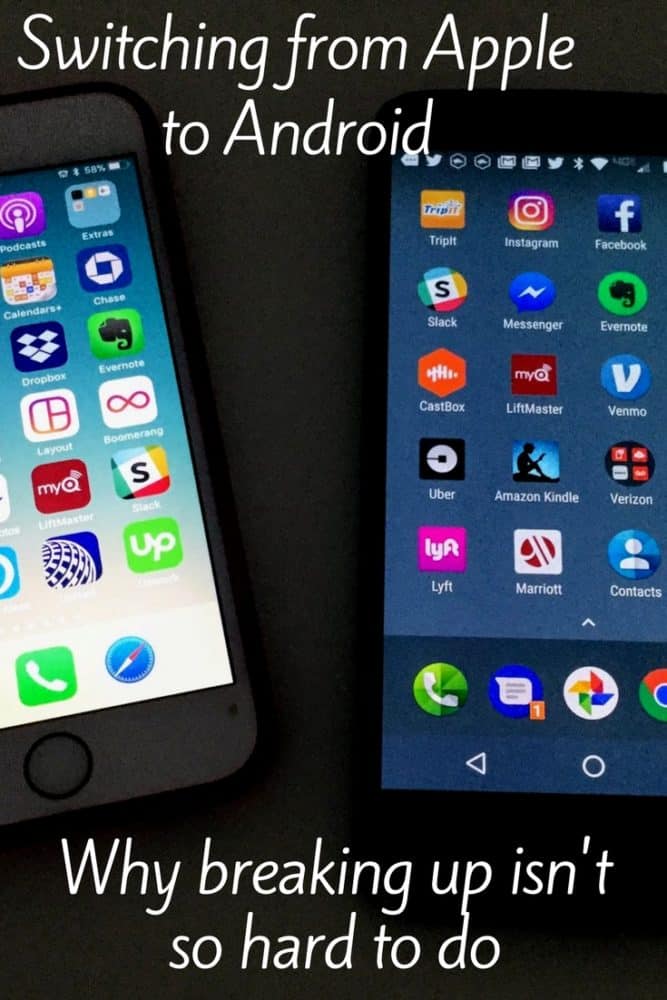