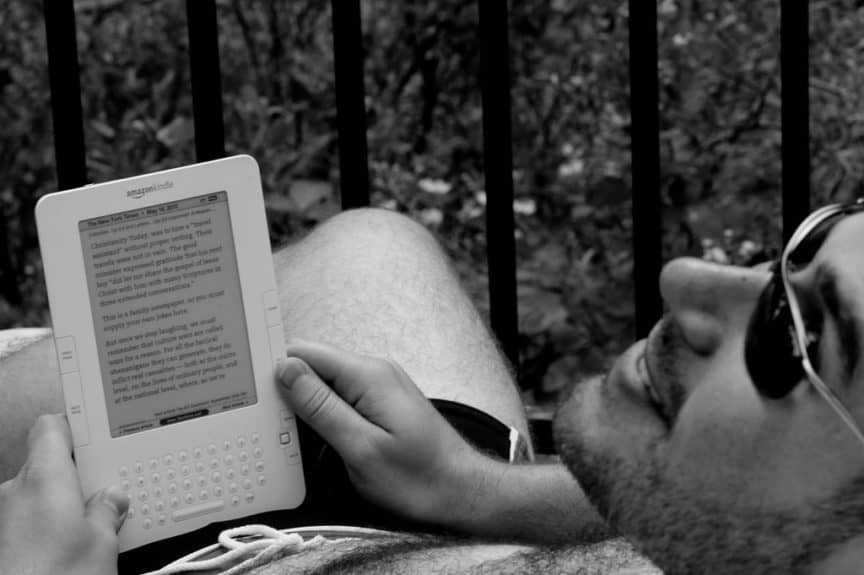 Note: Amazon no longer sells the Kindle Keyboard 3G, and has crippled the free international web browsing for existing owners. As a result, we now recommend the Kindle Paperwhite for travellers, and wrote a full review of it here.

First released only four years ago the Kindle e-reader has quickly become Amazon’s best-selling product, with the retailing giant shipping over one million units every single week of 2011.

The range has also grown significantly, from a single basic device to touch-screen and keyboard versions, a tablet-based product and software that runs on desktops, mobile and even within a web browser.

With such a range of options and features choosing the right version is far from straightforward.  After six months of real world testing, read on to find out why we think the Keyboard 3G is the best Kindle for travellers.

Unboxing the Kindle Keyboard 3G was a delightful surprise – it is so small and light that it almost feels like part of it is missing.  Smaller than an A5 sheet of paper and less than 250g/nine oz, it takes up virtually no room in even the most compact of bags.

For something so light it is surprisingly robust – although breakages are not unheard of this one has easily survived being dropped, squashed and generally subjected to the rigours of life in a backpack.  We would recommend a protective case though, to avoid scratches and damage to the screen.

When our laptops and tablets only last a few hours and our smartphones are out of juice by the end of the day, finding a device that has a battery life measured in months is quite a revelation.  The Keyboard 3G uses e-ink technology, so it only consumes power when the page changes or if wireless is turned on.

One less thing to find a power socket for each night is great, but more important is the ability to read a book throughout a lengthy plane or bus journey and still be able to find directions to a guesthouse once you arrive.

Any device that aims to replace traditional books needs to be usable anywhere that those books would be.  On the beach or a park bench, held in one hand on a crowded train, lying in bed at night, wherever.

The e-ink display on non-tablet Kindles is at its best in bright sunlight, and is much easier on the eyes after reading for a few hours than any computer screen.

For reasons of bulk, battery life and visibility, therefore, the tablet-based Fire and software-only Kindle versions are not ideal for regular travellers.

That still leaves the option of the basic Kindle, the Kindle Touch (in both 3G and Wifi-only versions) and the Keyboard 3G.  Why not save some money with the regular version, or choose the convenience of a touch screen?

For us the reason is simple: free mobile web browsing around the world.

Buried away in the “Experimental” section of the menu is a basic web browser.  All of the above Kindles have this, but only the Keyboard 3G combines unrestricted web browsing with a free 3G internet connection in over 100 countries around the world.

While other versions are restricted from browsing anything except the Amazon store or Wikipedia via 3G, any site with a mobile version is usable from the Keyboard 3G.  Yes, this means web-based email, Twitter, Facebook, even Google Maps can all be accessed for free from almost anywhere with a cell signal across large portions of the globe.

The browser is slow and very clunky – you wouldn’t want it to be your only way to get online – but the benefits are large.

No more over-priced airport Wi-fi.  No more wandering in the rain trying to find an internet cafe just to let your family know you’ve arrived somewhere new.  No more carrying your backpack for hours in the wrong direction because you can’t find a map.  Oh, and a new book as soon as you finish your old one.

For the traveller in need, it really is fantastic.

While the Fire is more versatile and the basic Kindle is cheaper, for us the Keyboard 3G is definitely the right choice for anybody spending time on the road.

If you’re a regular reader, it may well be one of the best travel technology investments you can make.