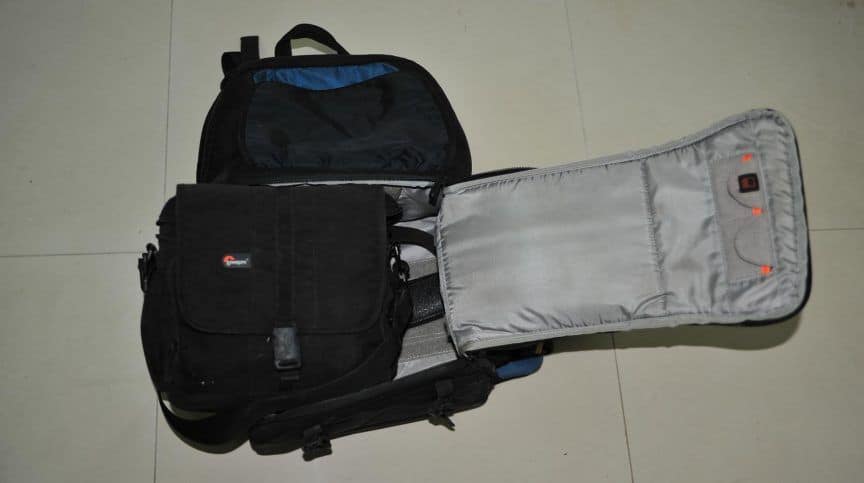 After you fall off a scooter, your mind goes through a series of priorities.

A string of expletives comes first, usually, followed by a quick check of yourself, your traveling partner and anyone else involved (is everyone OK?).

Then the scooter (does it start? Is there much damage?), and the camera bag and/or backpack play third or fourth fiddle to the far more important humans, as they should.

Once the shock and adrenaline wear off, however, you gather your wits and figure out if anything’s missing or broken. After a scooter incident involving a helmetless teenager who turned without signaling or looking, the camera bag took a nice long tumble on the pavement (everyone’s fine, by the way.)

I collected it from the road, expecting to find my Nikon DSLR in multiple pieces…

Nope. My D700 powered up, auto-focused, and snapped a picture that was saved to and played back from the memory card. A little dust was a simple matter to clean up, but I’m here to tell you about the Lowepro bags that survived and still keep on going. I should also point out that this is not a sponsored post — I’m just a satisfied real-world customer.

The Bigger One: Lowepro Fastpack 350

The first was the bigger investment, a Lowepro Fastpack 350. Whether you stay low-key with blue, out of sight with the black, or blaze new trails with the red, this one’s held together across most of Korea, lots of Thailand, and other Southeast Asian countries.

It’s been my main backpack for about two years, and despite sitting on the floors of countless bus terminals and buses, remains easy to clean with a moist cloth.

The main/bottom compartment zips open and shut from the side, meaning you can quickly access your camera without taking the backpack off. The main central column (by default) can easily accommodate a 70-200 or 80-200 lens attached to a large-bodied camera. (In other words, even the honkin’ big DSLR’s will fit.)

The four pockets on either side can be configured as your heart desires or your lenses require: there’s a virtually infinite number of configurations. Alternatively, take them out to stuff your clothing inside!

On the inside flap, they’ve even put a couple of small pockets for your memory cards (CF or SD cards), and the front of the bottom compartment has enough room for my phone charger, a tangle of charging cords, and an external battery pack.

The top compartment holds enough room to store a weekend’s worth of clothes, along with several smaller pockets for pens, toiletries, or other small stuff. A side compartment zips down to reveal a slim pocket big enough for your 17″ laptop.

Since I rarely take my Macbook with me, this pocket usually holds my iPad, a paper notebook, and whatever brochures or maps I pick up while I’m traveling.

The back has the usual straps to keep things comfy, including a belly strap and chest strap that really helps to distribute the weight. It’s fairly rare to be hiking any great distance with this on, so 98% of the time I leave them bundled up and rubber-banded to keep them out of the way.

Looking at the front, a couple of clips keep the flap closed, and could also be used to carry a tripod. These have ended up going unused for me, since they make a pack a bit wider. Still, it’s a nice touch, and shows consideration for what photographerss end up carrying in the real world.

The Smaller One: Lowepro Adventura 170

The bag is big enough for the DSLR, the 28-70 lens that’s usually on it, a small towel, and another lens. Two side pockets carry the water bottle(s), while the back of the bag offers up a couple of loops for your travel belt. I end up using those loops to carry my monopod. Just watch where the pole goes to avoid poking anyone accidentally!

That’s another little pocket for a memory card to the right there. Mine holds some mints, tissues, bandaids, an extra battery, and a spare memory card without any problem.

I didn’t realize this when I bought the bags since they were bought at different times, but they play extremely nice with each other. Take out the foam inserts in the backpack’s bottom/main compartment, and the Lowepro Adventura 170  fits right inside. Double protection and convenience.

Are my LowePro bags the cheapest packs ever? No. Given the quality and thought that’s gone into them, they’re understandably more expensive than the cheap street-side backpacks.

Then again, any serious traveler with their world on their backs (or simply carrying thousands of dollars of equipment) shouldn’t trust it all to a single strap on a cheap bag.

In two years of traveling to different cities, provinces, and countries, not one stitch has come loose, not one strap has loosened or come apart, and not one zipper has jammed. The only thing making it look different from a brand-new bag is the netting in the drink pocket.

It’s suffered a few holes due to overstuffing and unknowingly rubbing it against a sharp edge on a Thai bus. I can’t fairly hold the bag responsible for that!

So, which Lowepro bag(s) do you have? Shout out in the comments.