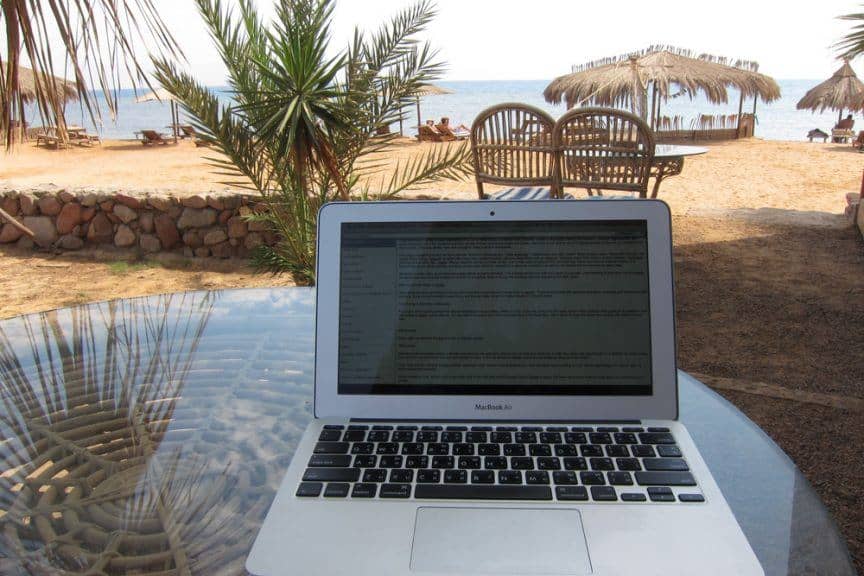 It’s only a matter of time before the Cult of Jobs gains critical mass, assimilation becomes inevitable and resistance becomes futile. If you’re smart and want to achieve early enlightenment, but would like it in a convenient travel-sized package, then you need the MacBook Air.

I mean need it.

Note: this article was written in 2013, and the Macbook Air has marched on since then. We’ve got a full update coming!

As travellers, we understand that every kilogram matters (and that metric is the only real measurement system). Airlines are clamping down on baggage allowances and you feel every extra gram when you’re trudging around in 30ºC heat looking for a place to stay.

The 11″ is lighter still, weighing a measly 1.08Kg. Erin’s 11″ is so light that every time I pick the damn thing up it flies out of my fingers and across the room. Luckily, its aluminium unibody shell keeps it protected wherever it lands.

The Magic of SSDs

Consider this: a magnetic hard drive consists of thin metal platters spinning at 5,400 revolutions per minute (that’s 90 times a second) with a tiny little needle flying backwards and forwards across the surface of these spinning disks at barely a hair’s breadth above them.

If that thought doesn’t make you want to back up immediately, then I don’t know what will. Also, yay human engineering! Still, if the needle touches the surface, it’s game over for your data. Think about this the next time you use a laptop on a bumpy plane or bus journey.

Getting an SSD drive is a much more durable option for travelling. Solid state means no moving parts—just little electrons flying around millions upon millions of semiconductors.

And not only are they more durable, SSD drives are faster.

Couple the superfast SSD with an Intel i5 or i7 dual core processor and up to 8GB of RAM and you have an ultralight laptop that can handle basically anything you throw at it—even RAW images.

An upgraded 13″ Air with the 2.0GHz CPU and the 8GB memory option is a more powerful machine (using Turbo Boost) than the entry-level 13″ Pro, but with all the benefits of it being small, light and featuring an SSD drive.

There are other Ultrabooks out there, but these heretics will be consumed by the hellfires once our turtleneck-clad overlords take over.

Only the Air comes with the One True Operating System: OS X (praise be).

I’ve talked plenty about why OS X is the best OS out there and in this not-so-humble author’s opinion, having used Linux, Windows and OS X for extended periods of time, OS X offers the best user experience available. So, if you’re new to Macs, then at least try it out for a bit for yourself and see how you get on.

One day you won’t have a choice.

At the risk of earning the disapproval of our future Great Leaders, there are some downsides to the Air.

The most obvious downside is that going SSD means less disk space. Magnetic storage is still cheaper and this is likely to remain the case for a few years yet so you’ll be sacrificing storage for speed.

You do have the option of upgrading the disk at purchase to a maximum of 512GB, but this adds another $300 to the price of the 13″.

Photoshop, After Effects and Premiere can all take advantage of a discrete graphics processor, so that’s something else to consider if you’re going to be doing a lot of 3D or video work as well, but if it’s just photo editing or your gaming action only extends as far as Angry Birds, then it’s the Air all the way.

I love my MacBook Pro Retina. The display is gorgeous but it is a crazy expensive machine and overkill for all but the most hardcore of users.

If it wasn’t for that display, then without a doubt I would be using the 13″ Air and, if you’re not doing professional HD video work or developing Retina apps, then it’s probably not worth the additional expense.

The Airs are competitively priced with other Ultrabooks, sitting in the middle of the price vs specs field. They start at $999 for the 11″ model, up to $1,899 for the fully kitted out 13″ model.

So, The Perfect Travel Laptop?

Robin Williams sums it up nicely when he talks about the MacBook Air in Good Will Hunting:

“You’re not perfect, sport. And let me save you the suspense … [it] isn’t perfect either. But the question is: whether or not you’re perfect for each other. That’s the whole deal.”

Simon Fairbairn is one half of Never Ending Voyage, a digital nomad couple who travel the world indefinitely. He cut his geek teeth on an Amiga 500 and learned computing the hard way—by breaking his dad's desktops and desperately trying to fix them before the old man got home.A recovering PHP developer and web designer, he has since learned Objective-C and now develops iOS apps over at Voyage Travel Apps.