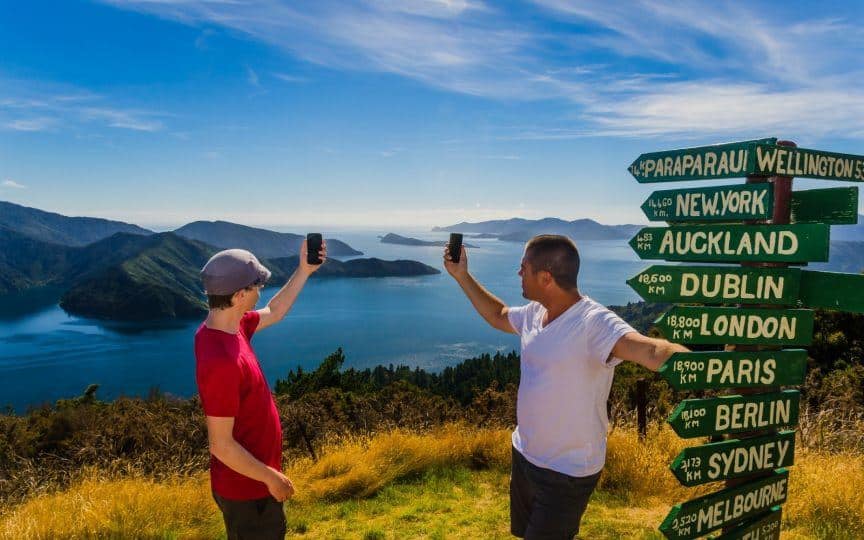 Note that this article was written in 2013, and no longer reflects the reality of internet access in New Zealand. A countrywide fibre rollout dramatically improved speeds and availability in much of the country, and on our most recent trip in 2021, the difference was very noticeable in hotels, hostels, and Airbnbs.

It’s now much rarer to find places that charge for access, and download speeds are on par with what you’ll find in most other countries. Slow, unreliable internet still exists, but is now largely confined to remote towns and villages.

We’re leaving this piece up for its historical interest, but don’t rely on it for accurate information at this point!

This is how I referred to Internet access in New Zealand when I began traveling three years ago. In fact, it was the first country on my first round-the-world trip, and one that set off my pattern of intermittent travel blogging.

A few years on, and New Zealand is still far behind the rest of the Western world when it comes to cheap and plentiful Internet access. In fact, I often compare it to the leading reigning champion of horrible Internet: Myanmar (Burma,) which we’ve also covered.

Below, we’ll dive into why Internet access is so poor in New Zealand. We’ll go back in time to see how far things have come, see what it’s like today, and what you can expect as a traveler in the future.

Finally, we’ll cover how to get the most out of what little Internet you’ll find, and how to track down that elusive free Wi-Fi in New Zealand.

Nearly three years ago, I wrote about the struggles of finding Internet access in New Zealand. Free Wi-Fi? Only at the few municipal libraries, and even then, capped at slow speeds and overloaded by other travelers and locals.

The most common option available for a traveler at the time? Pay-per-megabyte services such as Zenbu offering 10MB for $1 NZD (~$0.80). I wrote about how I accidentally blew through $15 NZD in credit when my podcasts began downloading in the background.

Hourly rates for Wi-Fi were around $5/hr, with cheaper rates available for longer terms (week/month). Unfortunately, to use them over the longer term, you would have to follow the hotspots the company had put up around the country.

Mobile service (3G) was too cost-prohibitive to even mention.

In a word, horrible.

There have been some serious strides made in the quality of service and available options, but still doesn’t come close to what the rest of the world has to offer.

The best source of free Wi-Fi is at libraries and government facilities around the country. From the Te Papa Museum in Wellington to the smaller libraries in places such as Akaroa, this is the place to catch up on your online backups and sync your Dropbox.

Telecom, a local telecommunications provider, has set up “Free Telecom Wi-fi Zones” in tourist areas around the country. Oddly enough, they’ve done this by outfitting payphones with Wi-Fi hotspots.

You’ll need a mobile phone number (with any provider) to sign up for the service, which then allows you to connect up to five devices and download up to 1GB/day for each.

You can find the hotspots on their map, or just keep an eye out for a bunch of people surrounding the local phone booth. I found the connections fairly flaky.

The odd accommodation here and there will offer free Wi-Fi, but this is the exception rather than the rule. In towns where one place offers free Wi-Fi, the chances are much greater that a few others will as well.

The trouble with free Wi-Fi at the moment is that since you have to pay for internet access in so many places, people tend to use all that they can while they are there. Approximately 10% (3 of roughly 30) of the places we stayed at in the past two months offered free Wi-Fi.

Free Wi-Fi can also be had in some cafes and restaurants, but it really depends on the city or town you’re in. Finding unsecured Wi-Fi will be very tricky, so you’ll likely have to stay for a while with a drink or meal to see if it’s any good.

Services such as Global Gossip which operate in many “backpackers” (New Zealand’s name for hostels/guesthouses) has gone from charging $5 NZD/hr in 2010 to charging $5 NZD (or less) per day now. Lines are often capped at about 100Kb/sec down, but Skype calls were possible without issue.

YHA New Zealand, which is a member of this network, offered free Wi-Fi to their members this summer. I suspect that this will just become free after the trial finishes at the end of April 2013.

If you thought that $5 a day was a push, it only gets worse.

IAC offers wireless mostly through campgrounds such as the Holiday Parks throughout the country, and is much more competitive than it was three years ago.  It also has nearly-unlimited access, with the 30-day plan offering up to 5TB of data. Good luck getting 1% of that with the speeds you’ll be getting — we got 50Kb/sec on a good day.

The aforementioned Zenbu, which somehow is still in business, continues to charge a criminal $1 for 10MB. To put that in perspective, renting a movie on Google Play will cost you about $5. Downloading the 2.2GB file with Zenbu will cost you another $220.

Too rich for your taste? Watching a Youtube video will only run about $1/min. Better make that a short video of cats playing the piano.

Motels and hotels we stayed at were typically worse than guesthouses. One place charged $2 for 10 minutes, which makes the place that charges $18 for 6 hours seem like a bargain.

The worst offender of all is HQ WiFi, which charges $5 for 15MB at Milford Sound.

Mobile has made huge strides in the past few years. Telecom and Vodafone both offer prepaid plans with 500MB of data for $20/month. Heavy users can opt for a data-only SIM from Vodafone giving you 2GB for $50.

You can read our guide about buying a SIM card in New Zealand for more information.

We’ve also been using XCOM Global mobile hotspots while on our travels here in New Zealand. They roam on the Vodafone network, and allow up to five devices to connect to the MiFi device at once.

At $15/day for “unlimited” (actually about 400MB / two days), they are good value for someone coming to the country for a week or two who doesn’t want to deal with the hassles of Wi-Fi or unlocked phones.

Making the Most of the Internet in New Zealand

One huge drawback with paying for Wi-Fi, besides the obvious paying part, is that you’re typically only allowed to connect one device. The easiest way to get around this is by using Connectify to share your Internet connection. Connectify is available for Windows (free) and we have the lowdown on how to set it up.

You can make the most of your limited bandwidth by turning off syncing for Google Photos and iCloud, online backups, and automated podcast downloads. Also consider setting your computer updates to download only when you ask for them.

Why Is the Internet in New Zealand So Bad?

There are a few things that are keeping the internet down in New Zealand.

New Zealand is an island in the middle of nowhere.

The arteries of the internet run through undersea cables through the world’s oceans. New Zealand, being an under-populated country far from the larger continents, gets most of its internet from Australia, which gets its connection via Asia. Essentially, New Zealand is the end of the internet line.

Small Companies and Lack of Competition

This is the most interesting to me. A few smaller companies seem to be holding on to the fact that the internet in New Zealand is a scarce resource, and charging exorbitant rates for usage. These appear to be small companies working the local angle by setting up hotels, guesthouses, and restaurants in the area with customized routers.

These companies have been able to survive because of little competition and hotel owners who don’t know any better. The good news is that I see this changing rapidly in the next few months, and most of these companies who are gouging customers will need to change their model or go out of business in the next year or two.

The Future of Internet in New Zealand

The wholesale price of internet access is far lower than it was three years ago, and we’re seeing those savings being slowly passed along to travelers. These small companies who continue to gouge their customers instead of changing their business strategies will quickly disappear.

More free Wi-Fi availability in a town or city will make other local coffee shops and accommodation do likewise. We’ve already seen this in places like Queenstown and Picton.

So the future is looking bright(er) for travelers to New Zealand. In the meantime, however, be prepared to pay too much for your Internet access while keeping your patience level high and your expectations low. 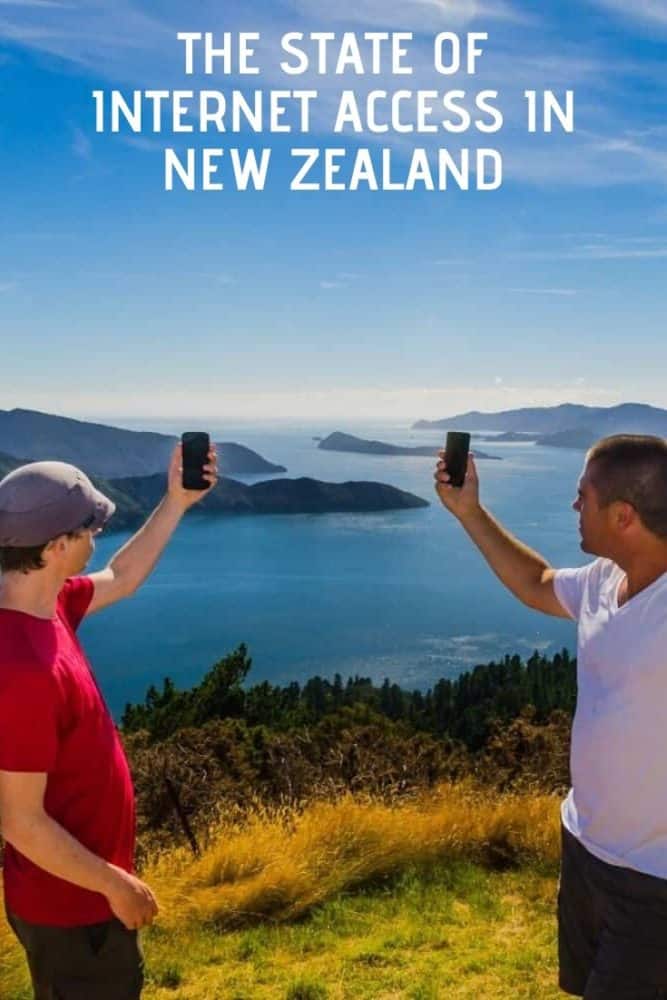