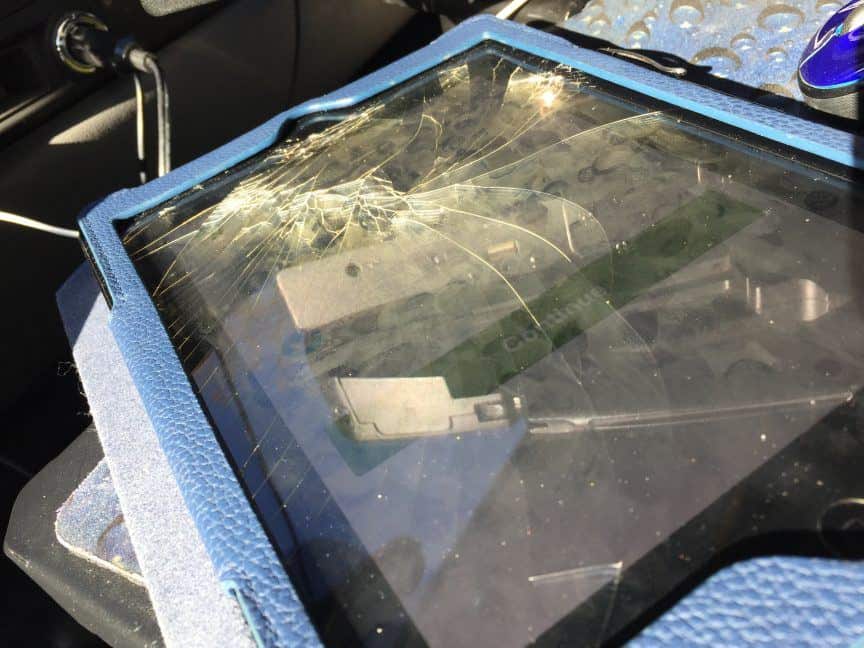 When the iPad came out in 2010, lines went around the block from the 5th Avenue Apple store in New York City. Everybody wanted a taste of Apple’s latest shiny toy, which promised to deliver the “most advanced technology in a magical and revolutionary device.”

Not me, however. In all fairness, I barely noticed the news, and even if I had, I’d have been less than impressed by the price tag. Back then I was in hardcore savings mode, preparing for a six-month trip later that year.

I had my first encounter with the new tablet during that trip, when a fellow traveler offered me hers in a hostel in Lilongwe, Malawi. She’d seen me freak out over an urgent need to check an online application, when the hostel had Wi-Fi but no in-house computer.

I fumbled with the thing for a few hours, but failed to get it working properly or compose a readable e-mail.

As iPads became more ubiquitous, and I had more opportunities to use them, my bafflement with the device didn’t stop. The screen was large enough to write comfortably, but the keyboard was no better than that on my iPhone, and slowed my typing to a crawl.

My eyes tired after reading on it for too long, and I found the camera pointless, given the size and bulkiness of the device. I kept wondering why my friends and coworkers, who already had a smartphone and (often) a laptop, would even consider performing any task on a device that made the experience significantly more frustrating.

Many years later, I can count on one hand the moments I’ve actually found any use for the iPad.

With every new version that comes out, the same question starts pounding in my head: what is the iPad offering that other devices don’t?

As someone who works from the road, I usually travel with a laptop, smartphone, and camera: the holy trinity of the digital nomad. Many also carry a Kindle or other brand e-reader, maybe a video camera, and some kind of external storage.

I find the iPad’s shortcoming most noticeable when using it for work, which is the priority for most digital nomads. Many working travelers have tried an iPad as a replacement for a laptop, and most have arrived at the same conclusion:

If you’re a blogger or a freelance writer and editor, typing in any of the word processing apps will be significantly slower than on a traditional keyboard. True, you can use a keyboard case or external Bluetooth keyboard, but that’s extra cost, and the experience is only slightly improved.

Any time I’ve used a Bluetooth keyboard, I’ve always ended up waiting for the tablet to catch up with me. That’s even more frustrating than composing a typo-filled email with the on-screen keyboard.

When editing, it seems surprisingly difficult for the tablet to know precisely where I’m tapping on the screen. The end result? More mistakes, and an even more drawn-out experience.

If you’re a photographer, editing professional-quality images is next-to-impossible on an iPad. Easy tasks like crop or straighten are pretty straightforward, but anything more complicated is bound to at least steal more time than it would have in a laptop

Apps like SnapSeed can help with brightness, saturation, and other basic editing features, as well as offering Instagram-worthy filters. More useful are Adobe’s mobile versions of popular editing services Lightroom and Photoshop that offer a little more power, but, as some reviewers have pointed out, they are more workflow companions than computer replacements.

Lightroom allows photographers to experiment with their images from their tablets wherever there is internet. Since they link to Adobe’s subscription-only Creative Cloud, without access to the cloud service, the app is useless. It also lacks some key desktop options, such as local adjustments and curves, and has limited export functions.

Photoshop, on the other hand, has a couple of different versions: Express and the main Photoshop mobile app.

Express is aimed mostly towards smartphone users, with basic image editing and touch-up options. It’s fine, as far as it goes, but isn’t really any better than other free photo editing tools.

After years of promises, Adobe finally released its “proper” Photoshop app for iPad in 2019. Like Lightroom, it only works with a Creative Cloud subscription, and while it does a lot more than the Express app, it’s still missing many of the features that professional users expect from the desktop version.

Say No to iPad Photography

We’ve said it before, and we’ll say it again: iPad photography needs to stop.

The device is too large and heavy to be held steady. It’s also too fragile, and there’s a terrifyingly-high chance of dropping it. The screen is hard to view in direct sunlight, the camera is mediocre, and you just look plain stupid doing it.

Just don’t. If your rationale is that your photography skills don’t warrant investing in a professional camera, then get a point-and-shoot. Or just pull out your smartphone: it will yield better results.

Apple’s mobile devices all include cameras, but those on recent iPhones are vastly superior to what you’ll get on even the most expensive iPad. Wide-angle lenses, optical zoom, and image stabilization are just three features you won’t find on the latest iPads.

Of course, there are two sides to any story, and for every skeptic, we have a fan. We’ve run stories in the past on people who would never dream of leaving their iPad at home, whether on a trip to Africa or even as a work tool. I have met frequent travelers who carry a smartphone, MacBook, and iPad all at once and say the tablet is the device they use most.

I’d argue, though, that these travelers would have had a much better experience with a different device. A phone would have been much easier to conceal in an unsafe area, whether that’s somewhere in Africa or any other part of the world.

In the case of digital nomads who work primarily on iPads, a MacBook Air would solve all of the problems with writing, adding links, editing photographs, and app availability and features, without adding much more bulk than an iPad Pro.

In the case of the travelers who carry an iPad as well as their smartphone and laptop, I am willing to bet that should their iPad be left behind, they wouldn’t actually miss it. Their other devices would cover all the tablet’s functions, with one less gadget to carry, charge, and worry about.

One of the few instances where I can see the point of carrying an iPad while working from the road is if your other devices run on Android or Windows. In this case, the iPad could give you access to iOS-only apps, such as FaceTime. Let’s face it, though, that’s not a common scenario.

For those who are traveling without trying to work, my suggestion would be to pack a smartphone, camera, and Kindle. Most travelers carry a combination of these devices, and they cover almost any electronic needs that arise during a vacation.

Too Expensive and Fragile

iPads don’t make the best travel companions: they’re harder to carry than a phone, and flashy enough to attract unwanted attention. They’re also pretty fragile, and most iPad cases don’t protect the devices as well as their smartphone equivalents.

Travel isn’t easy on your gear, especially technology. While digital nomads may have learned (maybe the hard way) to take extra care of their technology, I’d advise regular travelers to just not bring anything particularly valuable and breakable with them. The iPad sits right near the top of that list.

The e-Reader Wars: Kindle vs. iPad

Many people have fully embraced the ebook trend, foregoing the weight of paper copies. iPads can certainly be used as e-readers (my mom does it all the time.)

However, if you are planning to use an iPad mainly for reading, I’d suggest you look into the Kindle options instead. These are largely dedicated to ebook use, with features focused specifically on enhancing the reading experience.

Amazon’s flagship model, the Kindle Oasis, has a glorious seven-inch screen, adaptive front light, waterproofing, and several weeks of battery life. The Paperwhite offers many of the same features for around half the price, and is our top Kindle pick for travelers as a result.

The iPad Pro range has larger screens and also includes an ambient light sensor, but with a mere 10-hour battery life, extra weight, and high price tag, they’re nowhere near as useful for serious readers. Smaller, less-powerful iPad models are cheaper, but you could still buy three or four Paperwhites for the money.

In all honesty, if there is a market that could benefit from an iPad, it would be travelers that don’t work from the road and read a lot… but only if they don’t already own a smartphone or e-reader. In that case, an iPad could kill those two birds in one stone, albeit not do either job as well as a dedicated device.

For everyone else, though, the combination of smartphone, e-reader, and (optional) camera offers far better results for any travel-related task.

Avoiding Redundancy: What I Would Invest in Instead

An iPad is, pretty much, a bigger iPhone. If you are already own a laptop and a smartphone (especially if they are Apple-based), an iPad will offer you nothing new except a hole in your bank account, and a big, heavy gadget to find space for in your bag and try not to break.

My advice? Direct your hard-earned money towards another device that offers the same functionality as an iPad, but with added benefits.

If you work from the road, get a MacBook Air: it’s dramatically more useful, doesn’t weigh a whole lot more, and depending on which model of iPad you own, doesn’t even cost that much extra. Your eyes, fingers, and sanity will thank you.

If you are a regular traveler, invest in an iPhone: the 6.1-inch screen is a good size for any needs you might have in your trip — checking e-mail, browsing Google Maps, FaceTime, even reading a guidebook — and is much easier to carry and conceal.

Whichever you decide, you won’t be disappointed. Apple devices make excellent travel companions: the iPad just isn’t really one of them.

Do you own an iPad? Would you travel with one? 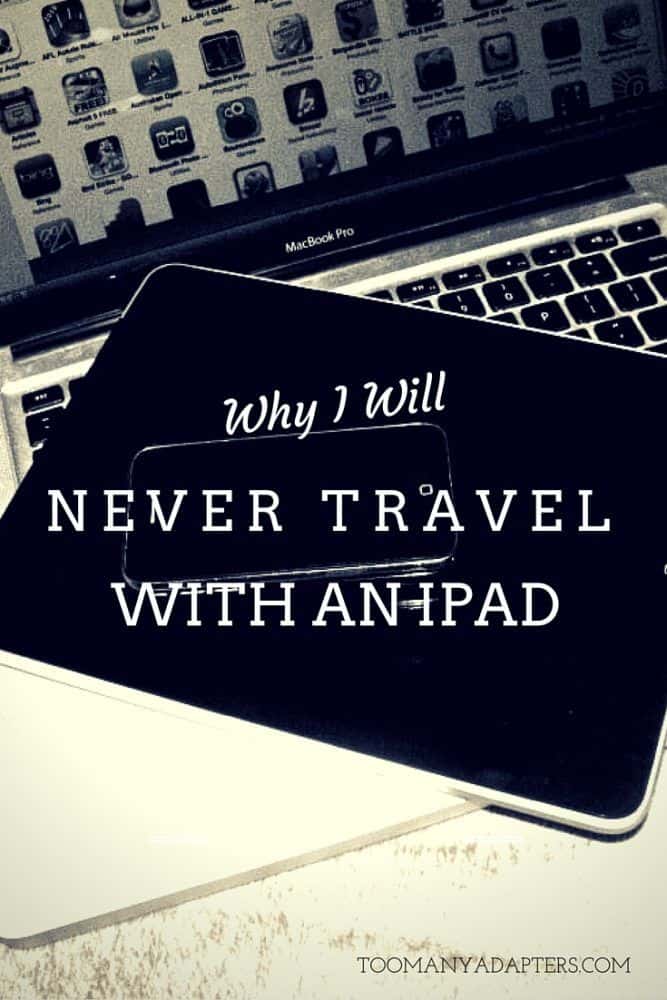