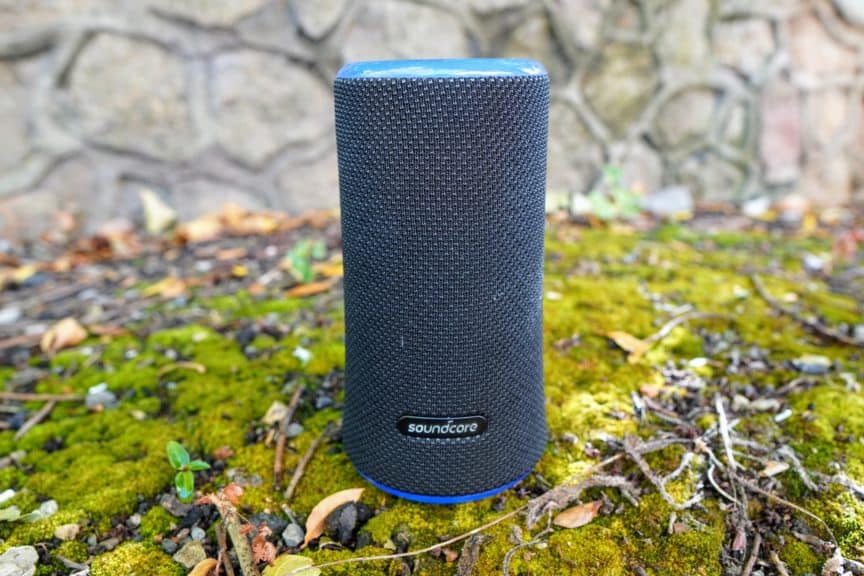 I’ve always had a soft spot for portable Bluetooth speakers. The idea of being able to fire up my favorite tunes around the BBQ, at the beach, or beside the campfire has long appealed, and I’ve owned a number of different models over the last decade.

If I’m honest, though, there was always something about them that disappointed. The small ones had weak sound and battery life, the larger ones were too big to take beyond the backyard, and most weren’t really durable enough to deal with the rain, dirt, and knocks they encountered.

I also wanted a speaker equally appropriate in my living room as it was beside the pool. Finding one that looked and sounded good enough for daily indoor use, yet was still durable enough for the outdoors, long proved hard to find. Things have changed a bit lately, though, and while there’s still a lot of junk out there, the odd diamond in the rough has appeared.

Anker, one of our favorite tech accessory companies, has lately been expanding into the audio market via its Soundcore brand. The Flare models form much of its portable speaker range, with the most recent being the mid-sized Flare 2. Well-priced and promising everything from “powerful 360° audio” to water resistance and its own light show, it sounds good on paper.

It’s in a challenging part of the market, though, and a solid list of features doesn’t mean much when there are several other companies making good portable, sub-$100 Bluetooth speakers. We’ve reviewed a lot of Anker gear over the years and it’s rarely disappointed, but how well does the Flare 2 compete in the real world?

Cylindrical and slightly flared at the base (hence the name), the fabric-covered Flare 2 looks like many other mid-size portable speakers. That’s true, at least, until you hit the power button and the LED light rings on the top and bottom kick in.

The top of the speaker has a few different buttons that control volume, power, and play/pause/skip. You can also answer and end phone calls with that button, as well as activate your phone’s voice assistant. There’s also a dedicated button for those LED lights, letting you turn them off entirely or change their pattern.

The dual 10W drivers pump out plenty of sound for a small speaker, and there’s a button on the back to activate the BassUp feature that does, well, exactly what the name suggests. Above it sits a Bluetooth pairing button, while below is a USB C charging port, underneath a rubber flap.

That flap helps give the speaker an IPX7 rating, which means it’ll handle immersion in up to a meter (3.3 feet) of water for half an hour. Does that mean you should play your favorite tunes from the bottom of the paddling pool? No, but the Flare 2 will handle rain, splashes, or a partygoer dropping their drink over it just fine.

Speaking of parties, if you’ve got more than one Flare 2 available, you can wirelessly connect them together using what Anker calls PartyCast. Apparently over 100 of them can be joined in this way, with the sound and lightshow synchronized across them all. As I get along with my neighbors and would prefer to keep it that way, I did not test that claim.

The internal battery gives up to 12 hours of music playback and takes around 3.5 hours to fully recharge from flat. An accompanying iOS and Android app, compatible with most recent Soundcore speakers, lets you control things like EQ, volume, and light pattern. It can also pause a track or turn the speaker off entirely, handy if you’re not standing nearby.

The Flare 2 arrived in a colorful box containing the speaker, a two-foot charging cable, and a basic instruction manual. Pairing mode was activated simply by holding down the Bluetooth button for a second, and was near-instantaneous from both laptop and phone.

The first thing I noticed when I powered it up was that a 20W speaker seemed pretty loud in a quiet house. The grumbles from my partner downstairs confirmed that suspicion. If you’re using the Flare 2 for background music or in a small room, you’ll rarely have the volume much above a third.

The Flare 2 didn’t look out of place on my desk, with the cloth-covered design keeping it stylish enough to blend into the background. It definitely didn’t scream “outdoor speaker” in the way that much of the competition does.

The sound was rich enough even at low volumes, but a speaker like this isn’t intended only for quiet indoor listening. Fortunately my testing period coincided with a trip away to the countryside for a week, where we were staying in a farmer’s field with nobody else around to complain.

Every night as the sun went down and the flames flickered in the firepit, the relaxing tones of Jack Johnson boomed out into the twilight. That wasn’t the only thing we listened to, but it always seemed a good place to start. The pheasants wandering around nearby seemed happy enough with the music selection.

I’d initially dismissed the LED lighting as a gimmick that I’d use once and turn off, but when darkness descended, the rhythmic pulsing added something to the ambiance, at least with slower songs. Things got quite frenetic on faster tracks, but if I was holding a dance party instead of chilling beside the fire, I’d probably have appreciated it.

Bluetooth range and stability were impressive. When I absentmindedly wandered off with my phone, music kept playing without a glitch from the other end of the field, over 100 feet away. There were no dropouts in normal use either, even when streaming for a couple of hours one sunny afternoon.

My initial impressions about the volume were confirmed: this speaker gets seriously loud. There was some distortion at the top of the range, but even outdoors, that’s louder than you’d usually listen unless you’re throwing a party. At normal volumes, music was warm and clear across a range of different music styles.

The bass boost made a difference, adding noticeable warmth and low-end punch to pretty much anything I listened to. Unless you’re strongly anti-bass, you’ll likely leave it on most of the time. All of the app’s equalization presets were a little anemic for rock and punk tracks, but setting a custom EQ and dialing up the low and mid levels fixed that.

I’d fully charged the speaker before heading away, and after using it for five hours with bass boost enabled and volume relatively low, the battery was at 50%. That’s roughly in line with Anker’s 12-hour claim, which is based on BassUp being turned off. Plan for somewhere around eight hours of normal use, a reasonable if not outstanding figure.

Anker needed to pull out all the stops to compete in a crowded portable speaker market, and it’s largely succeeded. The Flare 2 ticks all the right boxes: good sound, impressive volume, decent battery life, and able to handle bad weather and rough treatment while staying subtle enough to keep on your bookshelf.

I enjoyed listening to music on the Flare 2, in a way I rarely do with portable speakers. The lighting is a handy if non-essential bonus, and PartyCast gives plenty of flexibility for large houses or parties. The Soundcore app is easy to use and has features you’ll actually use, neither of which are a given for speakers like this.

Anker’s biggest competition here comes from Ultimate Ears' Wonderboom 3, our current pick for the best travel speaker. The UE version is smaller, lighter, and more durable, but it’s not a shoo-in.

That smaller size also means it doesn’t sound as good or get as loud, while the rugged design doesn’t look as good in your home. If you’re looking for a speaker that can do double duty in your living room and beside the pool, and don’t need a super-lightweight version that can hang off a hiking pack, the Flare 2 is the better option.

Well-constructed, reasonably-priced, and backed by Anker’s strong warranty and customer service, there’s an awful lot to like about this speaker and very little not to. Recommended.

Main image via author, other images via Amazon