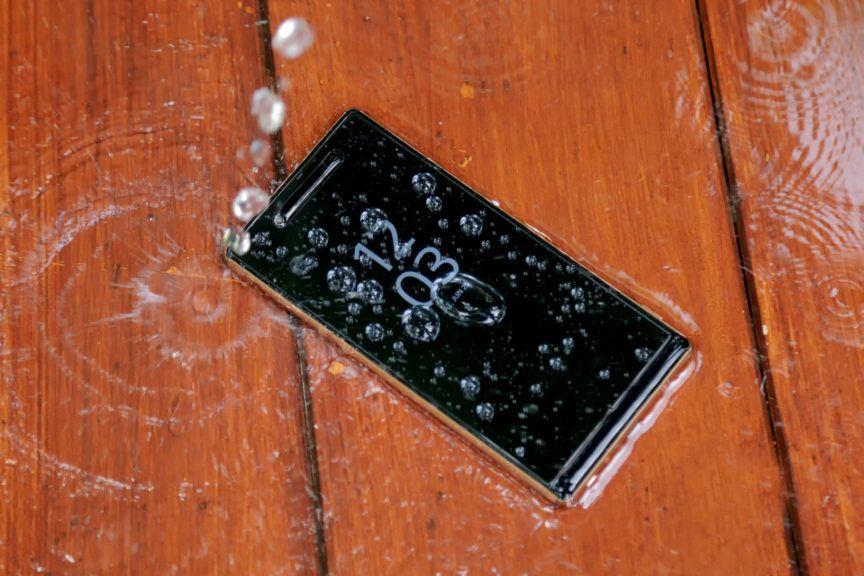 It can happen in a moment. Whether your “waterproof” case leaks, an unexpected thunderstorm shows up, or you simply get a bit clumsy in the bathroom after a couple of margaritas, it’s way too easy to end up with a soaked smartphone.

We’ll all been there. I’ve personally managed to drown two smartphones in recent years: one in a tulip field in the Netherlands when the heavens opened, and one on a plane when I knocked a glass of water all over myself… and all over my phone.

This is one situation where a little knowledge and preparation goes a long way, whether you’re in your kitchen or traveling thousands of miles from home. These tips won’t save every phone, but if you’re lucky, they might just save yours.

Get Your Phone out of the Water

Simple, right? Eww, but I dropped it in the toilet! I need to get some rubber gloves on… No. Tough it out. Every second of water exposure reduces the phone’s chances of making it out alive. Wash your hands thoroughly later, but for now, the priority is to get your phone away from any more water.

If it’s raining, wrap it in any material that won’t let in more liquid: a plastic bag works in a pinch. And, obviously, get out of the rain as soon as you can.

Turn It off and Start Removing Things

The case, and any other accessories, need to get out of the way ASAP. Much like in the emergency room when your clothes get cut off instead of carefully removed, seconds matter.

If it was plugged in when water was spilled on it, carefully turn it off at the wall and remove the plug from the socket. Water and electricity don’t mix.

If the phone didn’t shut down automatically, power it off now. For those with an iPhone, you’re limited in what you can remove: it’s pretty much just the SIM card if you’re using one. With Android devices, you may also have a microSD card that can come out, and with a few models, the battery as well.

Basically, anything that can be removed, should be. The more you can open up the phone, the less water will get trapped inside. All of the components mentioned above can also be damaged by water themselves, so taking them out and drying them off just makes sense.

Dry It With a Lint-Free Towel

It’s time to coddle this piece of tech you’ve just abused. If you wear glasses or own a DSLR, you probably have a lint-free towel laying around. If you don’t, a paper towel or washcloth will have to do.

Get rid of as much water as you can. The front and back of the phone should be completely dry by the time you finish. Be sure to get the cloth into the charging port, headphone jack, SIM slot, and any other nooks and crannies you can find.

The more water you can remove yourself, the better. Take your time with this: it’s important.

Find Things to Help Dry Your Phone Out

Now you’ve got rid of the surface water, it’s time to do what you can about the liquid inside your phone. I’ve listed three options here, depending on how well you’ve planned and where you are when disaster strikes.

Note that whatever approach you take, don’t try to use high heat to speed up the process. You’ll damage your phone even more if you sit it on top of the radiator for hours, or try to blast hot air through it with a hairdryer or fan heater.

Option A: The “Emergency Kit” Method

There are a few premade kit options on Amazon, including this Nine Lives version. They all work in a similar way: you put your phone inside, seal the top, leave it for at least 24 hours, and fervently pray to any nearby gods.

The kits use desiccants to absorb moisture and reduce humidity. You know those little bags in food and electronics packaging that say ‘DO NOT EAT’? It’s the same stuff.

Keeping one of these kits at the back of a cupboard could end up saving you hundreds of dollars on a new phone, but if you’re traveling, bear in mind you’re unlikely to easily find this sort of thing while backpacking across Asia.

If you’re hitting the road, do yourself a favor and pick one up before you go. Think of it as a first-aid kit for your tech if you need to justify the minuscule extra weight in your bag.

Sadly you can’t cheat by using those little bags of desiccants you’ve been collecting from your Amazon boxes. Those water-absorbing beads are a one-shot deal: once they’ve been used, they’re basically worthless. Although it’s theoretically possible to reactivate them by baking them in a low-temperature oven for a couple of hours, you need a lot of them and it’s unlikely to be worth the effort.

These kits are by far the best way of drying out your phone, but of course, it relies on you having been prepared enough to buy one in advance. If you didn’t, then read on.

Option B: The Old “Smartphone in Rice” Method

Putting your phone into a bowl of uncooked rice is a well-known way of trying to dry it out. It’s not ideal, but if you’re traveling or otherwise don’t have access to the emergency kit mentioned above, it’s certainly better than doing nothing.

That said, a few small details make a big difference in how well this approach will work.

Option C: The “Air it Out” Method

Let’s say the grocery store is closed or you’re in the middle of nowhere, and even a bag of rice is impossible to come by. What then?

Look around the area for a place with air movement. Hopefully you’re indoors by now, or in some other place where there’s little chance of the phone getting wetter. Your main goal at this point is evaporation of whatever liquid is still inside.

A fan is ideal, but even a laptop, cable box, or TV has some exhaust vents. You don’t really want dirty air blowing onto your phone, so give the vents a quick wipe to remove any obvious dust and dirt.

Be sure the phone rests at an angle: water should be flowing out of the device, not pooling inside of it. Put a paper towel or napkin underneath to absorb whatever water drains out.

The longer it can air out, the better. Again, at least give it overnight, with a day or two much better if you can.

The Moment of Truth

One of the biggest predictors of whether a phone will survive being soaked in water is how long you can dry it out for before trying to power it back up again. I mentioned it earlier but will say it again here: keep it turned off as long as possible. At least 24 hours is the minimum, and try for 48 hours or more if you can.

Don’t hit the power button to “test it out” or “see if it’s fixed yet” before that time. If there’s still water inside, it can easily conduct electricity to places on the circuit board that it’s not meant to go. The end result? A dead phone that could have been saved if you’d waited a while longer.

Once you’ve finally run out of time or patience, though, it’s time to see if you still have a working phone. Reassemble it, cross your fingers, and try to turn it on.

If it doesn’t work, don’t despair quite yet: it’s possible that the battery short-circuited and drained when it got wet. If your device has wireless charging, make sure the back of the phone is completely dry, then put it on the wireless charger for an hour and try again. Wireless power is safer than wired at this point.

If you can’t charge wireless, then make sure there’s absolutely no moisture in the USB or Lightning socket, charge the phone from the cable for a few minutes, and see how you go.

If you do see signs of life, go through a quick set of tests. Does the touchscreen or keypad work properly? Can you access Wi-Fi and get cell service? Does the screen look normal, with no flickering or discoloration? If so, breathe a big sigh of relief: you may well have just dodged a bullet.

I’ll note that these tactics can also work for tablets and laptops, though laptops are generally far less likely to survive more than a few drops of water. While phones and tablets only have a few places for water to flow in freely, a laptop is basically a glorified sieve.

If you still have a dead phone at this point, sadly it’s likely to be time for a trip to the nearest repair shop. Depending on which components got damaged and what kind of phone you have, though, repairs aren’t always prohibitive.

After drowning my phone in that tulip field I mentioned earlier, I dried it out under the fan in my hotel room for a day. It came back to life, but kept powering off by itself every few minutes afterward. After tracking down a tiny phone store in Amsterdam, I managed to get it fixed for under 50 euros, including the cost of a new battery.

Your mileage will, of course, vary wildly. iPhones are typically more expensive to repair than other models, especially if you take them to an official Apple store.

If it’s too expensive to fix and you find yourself unexpectedly in the market for a new phone, a piece of advice: get one with good water resistance built-in! Look for an IP67 rating or better: this means it will handle being dropped in the toilet or caught in a thunderstorm much better the next time around. 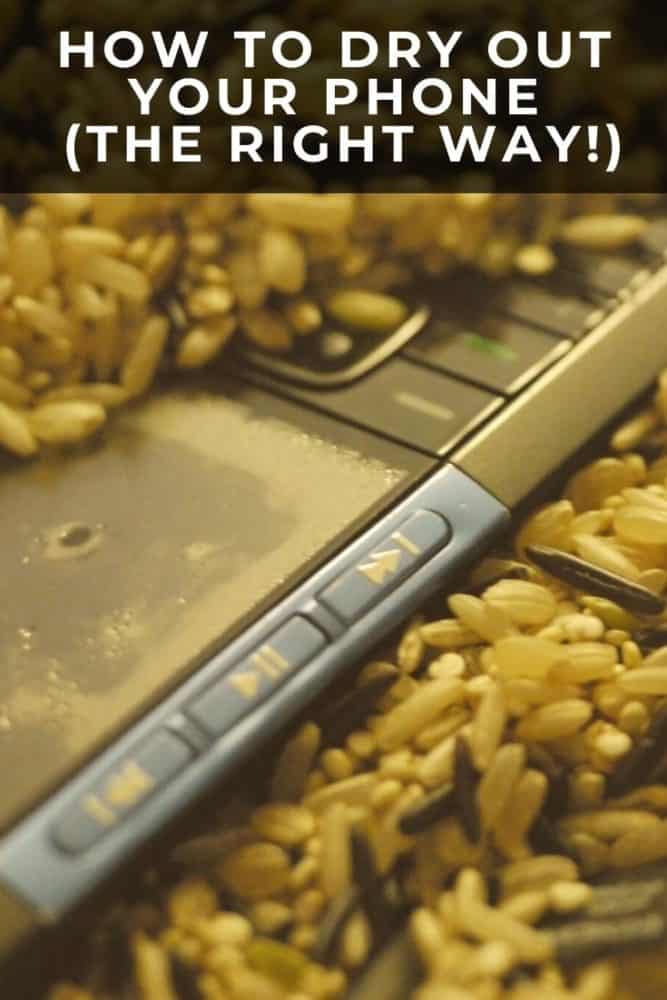