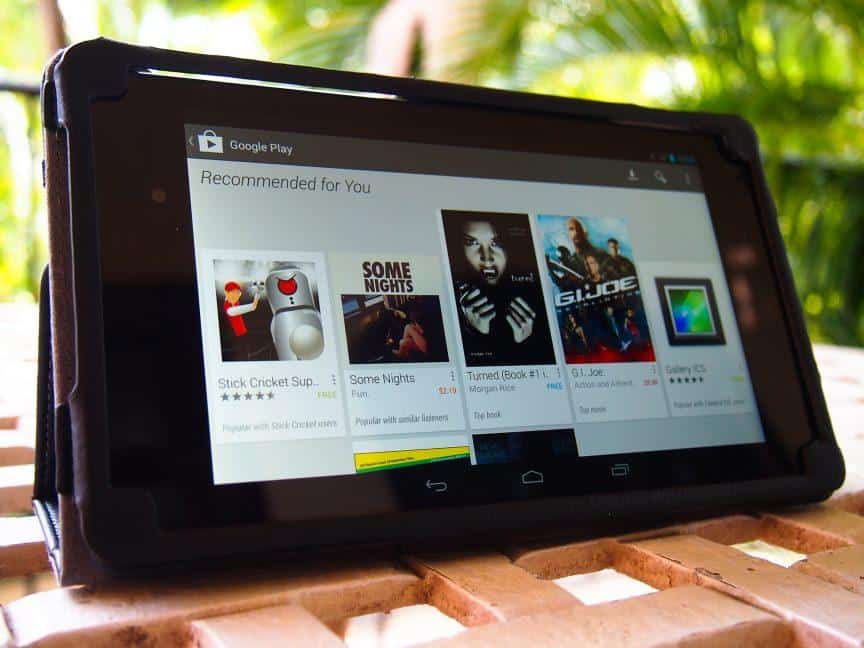 I avoided buying a tablet computer for the longest time. I already carried a laptop, smartphone, and Kindle with me on my travels, so what on earth would I do with yet another screen?

It wasn’t that they didn’t appeal — far from it, in fact, as I quietly coveted their slim lines and long battery life. It was just that they didn’t do anything I couldn’t already do with one of the devices I already had.

When the new version of the Google Nexus 7 tablet came out in July while I was in the US, though, my girlfriend offered to split the cost with me. I could resist no longer, ending up with the 32GB model that I’ve been using consistently for the last couple of months.

So, for a reluctant tablet buyer, how have I found it?

First impressions of the device were good, and they’ve stayed that way. The 7″ size sits comfortably in one hand and, as importantly, in a pocket of my day pack.

I picked up a case from Amazon to protect the tablet and prop it up for watching movies, but without that, it even fits in the back pocket of my jeans. I’m not quite why I’d want to keep it there, mind you.

It’s slim and light, but seemingly not at the expense of battery life. With the Wi-Fi turned on and browsing web pages for a couple of hours a night, I only need to charge the tablet once or twice a week. If I powered it off when I wasn’t using it, it would last even longer.

Even watching movies doesn’t seem to overly tax the device. After watching a few episodes of the latest Anthony Bourdain show on a recent flight, there was still over 70% battery left when I disembarked.

One of the biggest differences between the old Nexus and the latest model is the screen. It’s now full HD resolution (1920×1080), and it shows.

Video is crisp and clear, and the faster processor means there are no skips or delays in playback when the movie is stored on the device. When it comes to online video, slow internet is still slow internet.

I’ve played several different 2D and 3D games on the Nexus 7, and have come away impressed. With virtually no lag and being a comfortable size for extended play, it has become my go-to device for casual gaming.

Android recently introduced support for multiple users on a single device, and with my girlfriend and I sharing the tablet, this has come in very handy.

As well as practical considerations like having our individual email and social media accounts available without signing in and out of each one, there are certain… aesthetic benefits as well.

She has been able to choose a garish outer-space theme, for example, and then splash huge widgets all over her home screen, and I don’t need to look at any of it. Perfect!

The only other devices that come close are the brand-new Amazon Fire HDX range announced earlier this week. They’re the same price, but are heavily customised for the Amazon experience, including adverts on the lock screen.

If you’re after a straight Android tablet without vendor customisations, the Nexus 7 is easily the best choice on the market.

How I Use It

As I mentioned, I was a reluctant purchaser. I just wasn’t quite sure how I’d use my new tablet, given I could do everything I wanted or needed to on an existing device.

That said, I have found myself integrating the Nexus into my daily routine in a few different ways.

My main use by far is reading my RSS feeds. While I’m happy enough scrolling through them on my phone, my first choice now is always Feedly on the tablet.

Articles just look so much better — the larger, brighter screen makes a huge difference — and I find myself reading far more than I was before. Lengthy articles are now a pleasure rather than a chore to work through.

On planes and trains, the Nexus comes into its own. As long as I’ve remembered to load it up with a few of my favorite shows, I can happily let several hours pass just by propping the tablet up on its stand and plugging in my noise-cancelling earphones.

My girlfriend and I can even both watch the same show simultaneously, since the screen size and viewing angle make that a viable choice. If we ever find our earphone splitters again, that is.

As mentioned before, the Nexus 7 has quickly become my preferred option for casual gaming. While it won’t replace a dedicated computer or console any time soon, it’s perfect for killing time on long travel days.

The larger screen definitely makes a difference compared to the 4.3″ version on my phone, and because I view the tablet as an ‘extra’ device, I don’t mind running the battery down. I’m not going to need it to find my way to a guesthouse a few hours later.

Things I Thought I’d Use It For, But Don’t

When trying to justify the purchase to myself, I came up with various different ways I thought I’d use the tablet. While many have turned out to be correct, there were a couple of expected uses that just haven’t panned out.

I thought that the Nexus would occupy a bit of a sweet spot for me when it came to replying to emails and wasting time doing important things on social media. It has a bigger screen than my phone, after all, without needing to drag out the laptop.

Although that’s technically true, I’ve found that inputting text using the on-screen keyboard is more like the phone than the laptop. That rules out writing anything much longer than a Twitter update most of the time.

I had grand hopes of also using the tablet as a second screen while working, perhaps having email or a spreadsheet off to one side, available at a glance. In reality that’s more of a geek thing than a practical use, especially since I don’t usually have a proper desk set up.

I don’t need the distraction either. It’s hard enough to focus at the best of times without another continually-updating screen flickering away.

With all of the things I do like about the Nexus 7, is there anything I don’t like? Honestly there’s not much, but like any piece of technology, it’s not perfect.

The biggest downside of the Nexus, and any other tablet for that matter, is the input. Virtual keyboards just can’t compare to the real thing.

I’ve tried several different keyboards, including the inbuilt one, Swiftkey (which I use on my phone,) and several others. Sadly, while none have been terrible, I haven’t found the larger keys on the tablet make my typing any faster or more accurate.

If I want to leave the laptop behind and just use the tablet for a few days (on a motorbike trip, for instance, where space is limited), I think I’ll need to pick up a little Bluetooth keyboard if I want to get any work done along the way.

So overall, what do I think of the new Nexus 7? Surprisingly, I have to say that I really like it. For what it costs it’s a remarkable device, and I find myself using it a lot more than I expected.

Even permanent travelers need their downtime, and most evenings that’s provided by this tablet. It’s great on long journeys, and as long as I’m not in direct sunlight, provides a better reading experience than my other devices.

Is it a requirement on the road? In many cases, probably not, especially if you’re already carrying a phone and laptop. For those wanting to keep the weight down, though, leaving the laptop at home and taking the Nexus instead is definitely a viable option.

Pair it with a physical keyboard if you’re got a lot of typing to do, and you’ve got a very practical device.

With its long battery life, perfect size and weight, high performance, and great screen, it’s simply the best tablet for travelers in 2013.

Have you picked up the new Nexus 7 yet? Will you?