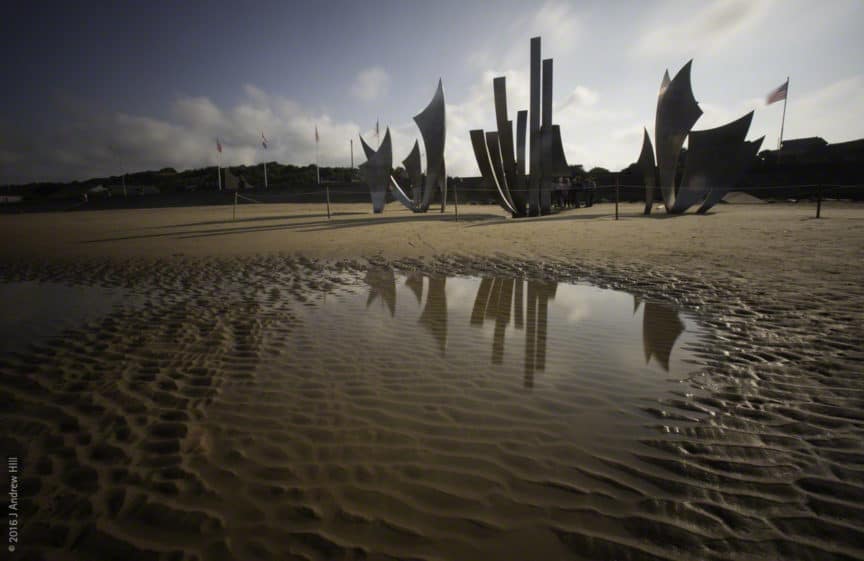 With the explosion of global tourism, it’s common to share those perfect photo opportunities with large crowds of people. Thankfully, with a bit of patience and the right gear, it’s still possible to get a pristine, uncrowded image even when you’ve got dozens of other tourists walking through your shot.

I carry a neutral density filter with me all the time, for just this purpose. It’s kind of like dark glasses for your camera, and it’s a game-changer.

Because it reduces the light entering the lens by a specified number of stops, it lets you use long exposures in broad daylight. A longer exposure means more motion blur, and you can extend that concept to blur moving people out of the shot altogether!

Presto, your shuffling crowd of spectators magically disappears. Below are a few examples of places that had lots of people, where I was able to get a quieter, emptier shot using this technique (click for larger version):

How to Set up the Shot

First off, make sure you are shooting in RAW, RAF, or DNG format, rather than JPG. Shooting RAW creates big files but there’s far more data in each shot, so you can change the exposure a few stops up or down in Lightroom later.

In fact, always shoot RAW. SD card and disk storage are cheap, and you often can’t go back and re-shoot the perfect image!

Find somewhere you can stay still, out of the line of traffic. Frame your composition, and look for a spot where people will be walking through the frame, rather than standing still or walking towards/away from you.

The more still someone is, the more chance they’ll be in your shot as a person or a blurry smudge. That’s great if you want to have them in-frame, but otherwise not what you’re after.

Also, it’s fine if the subject is poorly-lit. In fact, that’ll be easier than a really bright shot for your first few attempts. We’re trying to reduce the light coming into the camera to create blur, so less ambient light will help that.

Figure out Your Focus

I like to set my aperture high (f16-f22,) so I have a deep depth of field, and use my lens’s focal range/distance scale to fix my focus at infinity for f22. In the case of my 16-35 zoom, that means everything from about six feet to infinity will be in focus.

Now, with your lens focused, turn off autofocus. The camera won’t be able to focus well with its ND “dark glasses” on, which is why you’ve done the hard work for it.

While you’re at it, set your camera release to self-timer. You won’t want to jiggle the camera with your finger when you release the shutter. I tend to use a two-second timer.

Figure out Your Exposure Without the Filter

Now, take a test shot without the ND filter attached to figure out a good exposure. Let’s say your camera is set at ISO 100 and the meter tells you the shot should be 1/6th of a second (or 6, as your camera displays it) at f22. That’s your starting point.

Don’t worry if the shutter speed of slower than 1/60th means motion blur. That’s what we want here, and why we’re using that tripod or stable resting place!

Adjust the Exposure and Add the Filter

Next, you’re going to set the camera to manual so that you have complete control over the settings.

Start with the settings your camera recommended. In my example: ISO at 100, shutter speed at 1/6th, aperture at f22. Now, you have to do a little calculation and adjustment, but don’t worry. I’m terrible with numbers and can still usually get it right!

Know your ND filter number, or in other words, how much light it removes. Neutral density filters come in a variety of stop levels, from 1 to 10 or more, and mine is a ten-stop version. It’s more expensive to buy one of these, but I knew I’d be using it for really long exposures, so opted for one ND filter on steroids rather than buying several, or stacking filters.)

So, my filter removes 10 stops worth of light. That means I need to adjust my shutter speed (remember, I like my aperture at f22 for deep focus, so I’m leaving that there) by 10 stops slower in order to compensate and let enough light in.

Take the Shot and BRACKET!!

When in doubt, go longer: add extra exposure time for your additional shots. Try doubling, then doubling the time again, and once more. When I do this, I’m usually surprised at how long I can expose the image without overexposing it.

I’ve found, in fact, that I often do better by adding another 1-5 stops more light than the ten stops I think I need. If I can get an exposure of 15-30 seconds or more, most of the people in the frame will have moved through it, and not show up in the final result.

Play with it, and see how slow you can make your shutter before you start overexposing the photo.

Wherever possible, bracket! Try as many different settings as you have time and patience for. I typically try for shutter speed increments of 1, 5, 15, and 30 seconds, if possible.

With my camera stationary, I will then have multiple choices, and the option to composite the shots if I like parts of one better than another.

I download my photos into Adobe Lightroom for processing, but you can use Photoshop or Apple Photos as well.

The shots I take with a neutral density filter always need color correction. Many of these filters have a warmish yellow cast, so I adjust the color temperature from warm yellow (maybe in the 4000-5000 range) down to a cooler temperature, in the 3000s.

From there, I will sometimes play with pulling the shots into Photoshop as layers, compositing the sections from each layer as needed. I do this right from Lightroom by selecting multiple exposures (command-click on Mac in grid view), and opening as layers in Photoshop.

Once in Photoshop, I mask off parts of each layer to hide the smudges where people were standing relatively still.

Finally, I re-save (as a TIFF with layers intact, just in case I want to go back for more layer edits) and close Photoshop, returning to the composited image in Lightroom for final color tweaks.

Putting It All Into Practice

For this example shot, I had to improvise. I didn’t have a tripod or even a large backpack to set up on, but I did have a crowd of businessmen on a tour of the castle at Matsuyama.

So I framed a shot I liked, from a nearby tree with a useful crook in it. Bunching up my jacket and the strap under the camera to stabilize it, I took four or five shots. In the end I used two of them, since the tour guide chose to hold very still during one of the shots!

I almost called out to her to get her to walk out of the frame over to me, but I decided it was better to demonstrate what to do when faced with a curveball! 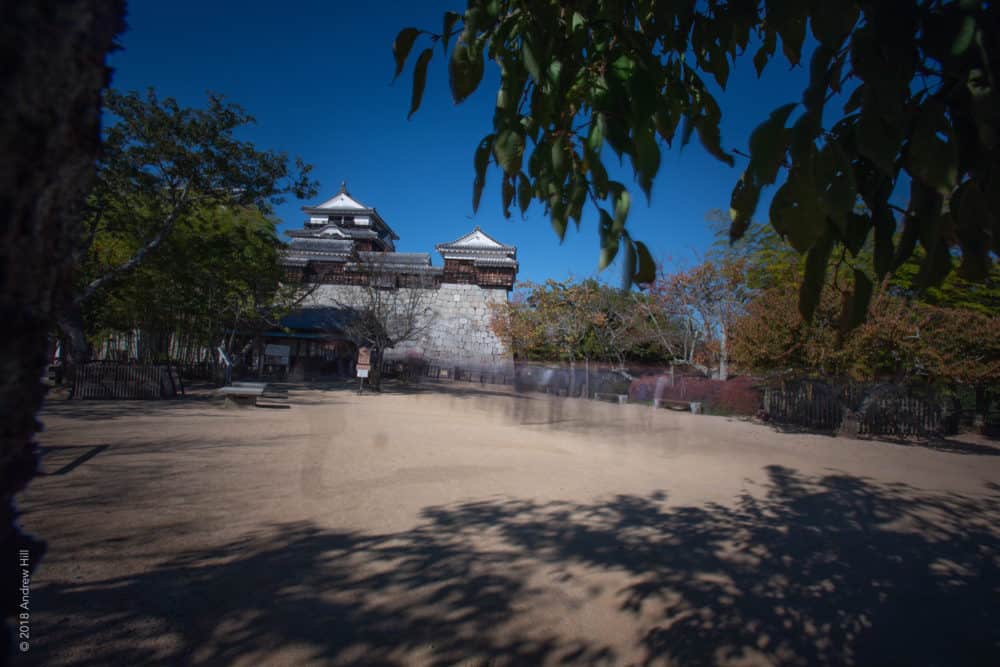 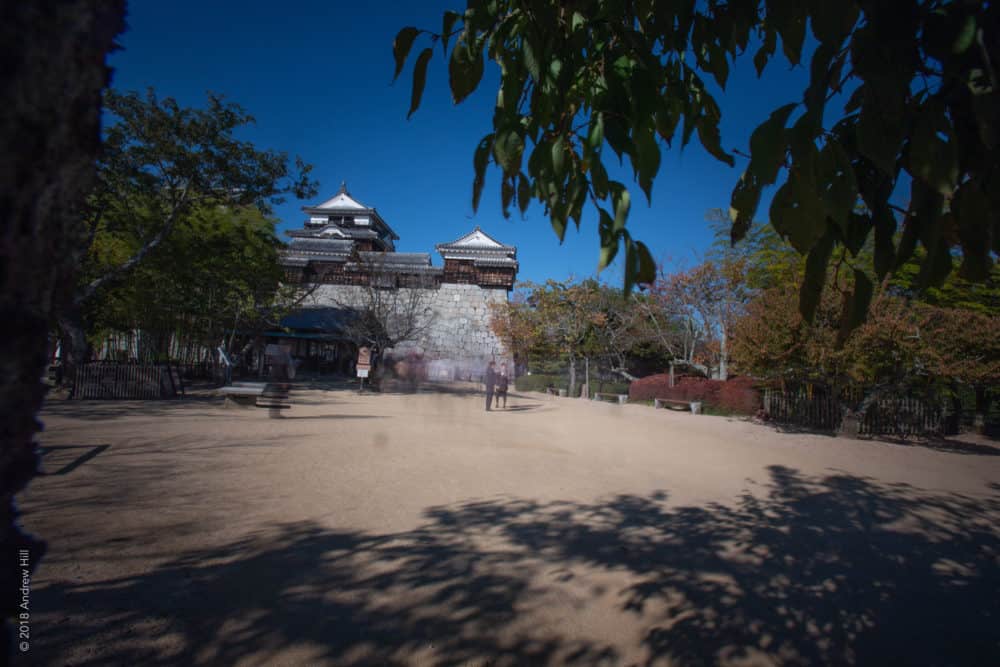 In the above shots, you can see a few ghosted forms of people who didn’t move much during the exposure. Because the camera was perfectly stationary between shots, everything aligned in each exposure when I brought them into Photoshop as layers, and I could use masking to selectively show/hide areas from each image.

Afterward, I color-corrected and cropped the image in Lightroom to create the end result: a quiet, empty courtyard in front of the castle tower, despite the crowds!

All images via Andrew Hill.

For 24 years Andrew has been a photographer, marketing strategist, graphic designer, and dad. He’s worked across a variety of industries, often with startups, including technology, environmental, education, music, health care, and food. He and his life/work partner Lisa travel the world looking for adventure and good noodles, while working from laptops, cars, and various wifi hotspots. 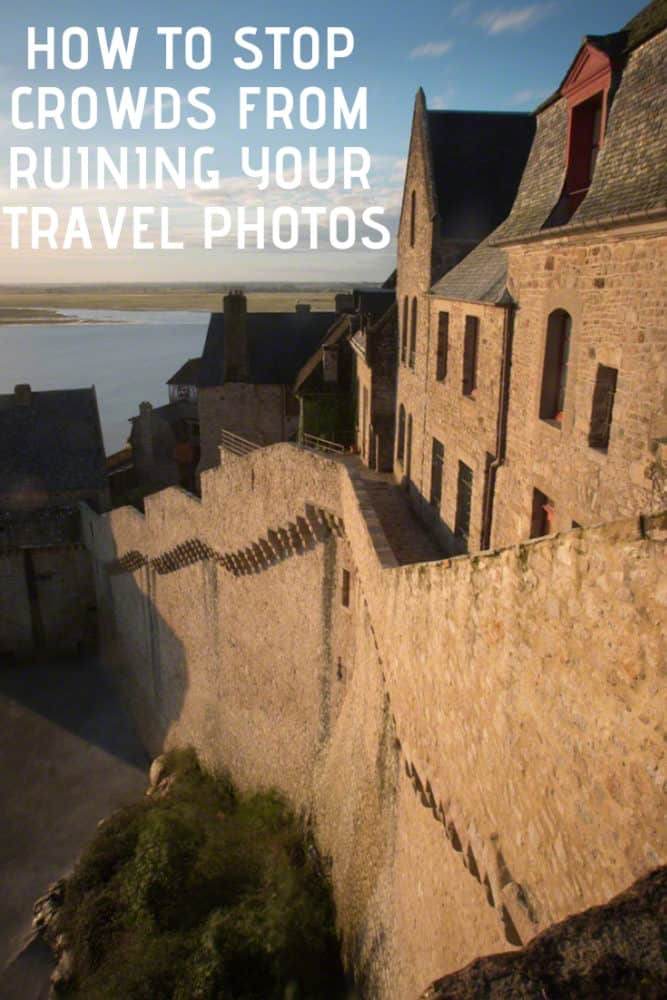