Whether you’re a seasoned travel writer or just trying to give good directions to a place, knowing where you’ve been can be critical.

This goes double in countries where street signs seem optional (hello, Thailand!), or a street address doesn’t have any bearing on reality (hello again, Thailand!). Even if you have a street address that’s readily recognized, though, Google Maps sometimes has a tough time with it.

That’s where GPS comes in. With the right hardware and software (which you may well already be using), you can tag every photo you take with GPS information that will identify exactly where you were at the time.

You can refer to those details later, and even view them on a map if you need to. Who needs a notebook and pen, huh?

Who or What Is a GPS?

GPS is short for Global Positioning System — you’ve seen it being used in a car (“turn right in… 300 meters” or “reCALculating”) or when finding your current location on your phone. If you’ve heard of geocaching, this 21st-century game uses the GPS system as well.

Up in space, a network of satellites orbits the earth on very precise orbits, circling the earth twice a day.

A GPS receiver (either a separate piece of hardware, or your phone) receives these signals from multiple satellites to triangulate your exact location, down to about five meters of accuracy.

While they’re not always shown by default, the GPS coordinates (essentially, a string of numbers) can help us identify an exact location. Pretty cool, but how does that help us?

Simply put, knowing the GPS coordinates to a place means knowing a constant ‘address’ for an area. It doesn’t matter whether there’s a physical address system in the area or not, and it works with virtually any kind of technology out there.

What Goes Into a Set of GPS Coordinates?

The first number is the latitude (north or south direction.) 0 is the equator, 90 is the North Pole, -90 is the South Pole.

The second number is the longitude (east or west direction.) 0 is the prime meridian which runs through Greenwich, England.

While the Earth isn’t a perfect sphere, we still measure longitude and latitude with degrees. In this system, 0 degrees latitude and 0 degrees longitude equals a point on the equator in the South Atlantic Ocean, about 550 kilometers south of Accra, Ghana:

Some GPS coordinates can be given with a cardinal direction in mind, such as ‘N’ for north or ‘E’ for east. Personally, I ignore those, but you’ll see them used in place of a minus sign.

One more detail: a single degree of latitude is about 111 kilometers , so we’ll need to narrow this down a bit to be useful. Two approaches are common:

That first decimal in the seconds narrows the exact location to about three meters. That’s good enough to tell one building from the next in most cases.

By default, Google Maps gives you GPS coordinates with six decimal places. That’s good enough to narrow the exact location to about 11 centimeters. This is perfect to identify the front entrance, for instance, or an interesting feature of the building you’re visiting.

While Google Maps supports both, you’ll find it easier to give (and type in) the decimal addresses. You may see the “minutes and seconds” method used by some apps or devices, so don’t get confused. They’ll both work fine.

So Where Did I Take That Photo?

With that admittedly long introduction to GPS out of the way, there are three ways to get the GPS coordinates of where you took a photo (sometimes called ‘GPS tagging’).

Option A: An App on Your Phone or Tablet

First things first – let’s get the device into ‘collection mode’.

Turn on the Location Services first. In short, the phone’s asking “which services should have access to location data?” Turn it on for the Camera app on iOS and any other apps that you’ll use while traveling (e.g. Google Maps).

On Android, go to  Settings > Location (or Location and Security) > ‘Use GPS satellites’. Tap to toggle it on or off. Open the Camera app, then go to Settings (gear) icon. Tap the “Store Location in Pictures,” or “Geo-tag Photos” to get the green checkmark. Things might be a little different depending on the model of phone and version of Android, of course.

Either way, the phone should now be including GPS coordinates in the EXIF data (metadata) that’s part of every digital photo.

Pro tip: give the phone time to determine your current location before you start shooting. It can take anywhere from a few seconds to a minute for the phone to figure out your current location. If you take pictures before it’s locked onto where you are right now, it may add the GPS coordinates from wherever you last were. That’s not ideal.

Option B: An Add-On to Your Camera

If I’m shooting with my DSLR, I’ll often just snap a quick photo with my phone as well to grab the GPS co-ordinates for the area. That approach works fine, but it’s kind of a pain, and easy to forget to do. Wouldn’t life be easier if there was some way to get my camera to do it automatically?

Many of the newer cameras on the market have GPS built-in. It can automatically tag the coordinates when you take a picture: just venture into the camera’s settings to enable it.

If you’ve bought a new camera in the past year, definitely check the instructions and look through that menu before dropping more money on an accessory.

If your camera is older, or just doesn’t have GPS as one of its features, there is another option. Various companies make standalone gadgets that can do the hard work for you.

These are not cheap pieces of hardware, although they’re meant to last as long as your camera does, which may help you justify the cost a little more easily. The time they save is also a consideration. Not having to guess or switch between several programs is wonderful. The hardware automatically adds the GPS coordinates the instant you take the picture.

Update: as more and more cameras come with GPS built in, manufacturers have stopped making the dedicated units mentioned below. You may still be able to find them secondhand or from local dealers, however, so we’re leaving the information available for now.

The GP-1A is compatible with the Nikon D5000, D5100, D7000, and D90 models. It connects to the GPS satellites and inputs the coordinates into the photo itself.

Give it a few moments to connect to the satellites, and leave it on so it stays connected.

For the higher-end Nikon’s, you’ll want to check out the Geotagger Pro 2-d GPS unit. It’s a third-party device that runs on its own Li-ion battery, and can also be used as a wireless remote and timer release.

It comes with an AC adapter of its own to keep it charged.

For some of the newer Nikon cameras, there’s the Geotagger N3-c GPS unit. Powered from the camera itself, this power-efficient device ensures a fast start with a ‘wake up and sleep’ mode to keep you working as fast as you like.

I haven’t forgotten about you Canon users! The Canon GP-E2 is compatible with the EOS-1D X, EOS 5D Mark III, and EOS 7D, the device can act as a stand-alone GPS logger. The receiver uses a single AA battery to avoid using the camera’s battery.

For other Canon DSLR cameras:

Let’s say you’re willing to spend some time merging data, and that you’d rather do that than spend hundreds of dollars on a dedicated GPS unit. I’ll give credit to the Cult of Mac for first putting this all together.

For iOS devices, the app you’ll want is called GeoTagr ($4.99). Sync your camera’s and your phone’s clocks, then take pictures with your camera as you like.

When you’re back at your computer, use the app to apply the recorded GPS coordinates to a folder of photos. GPS4Cam ($3.99 for Pro version and a free Lite version)

Another option is GPS4Cam ($1.25), which pairs nicely with a desktop app (for PC or Mac, both free)

Great! Now How Do You See Those GPS Coordinates?

If you took the photos with your phone, you have plenty of ways to see those coordinates. My personal favorite is a free iOS app called Koredoko. This will be by far the easiest way to see where a photo was taken.

For Android, check out the free GPS Photo Viewer, which does essentially the same thing.

If you’ve added GPS information to your DSLR shots as above, import the photos to Google Photos, Lightroom, or virtually any other photo management or editing tool. They’ll usually let you see the EXIF data, which is where the GPS data is stored. Many will also show you the location directly on a map.

In Google Photos for Android, for instance, pick a photo you like the look of, then tap the three-dot menu on the top right and choose “Info.”

There, you’ll see a bunch of extra information, including the time and date, exposure, and other settings. There’s also a location section with both the actual GPS coordinates, and a Google Map snippet with the exact spot pinpointed.

You can tap on the map snippet to open it in the full Google Maps app, and scroll or zoom around to your heart’s content. Easy!

Now, you no longer have the excuse that you “don’t remember” where you took a photo. You may have to start saying “I’ll have to check my records, let me get back to you,” before handing out the GPS coordinates — and getting people to buy you a drink in exchange for explaining how to use them! 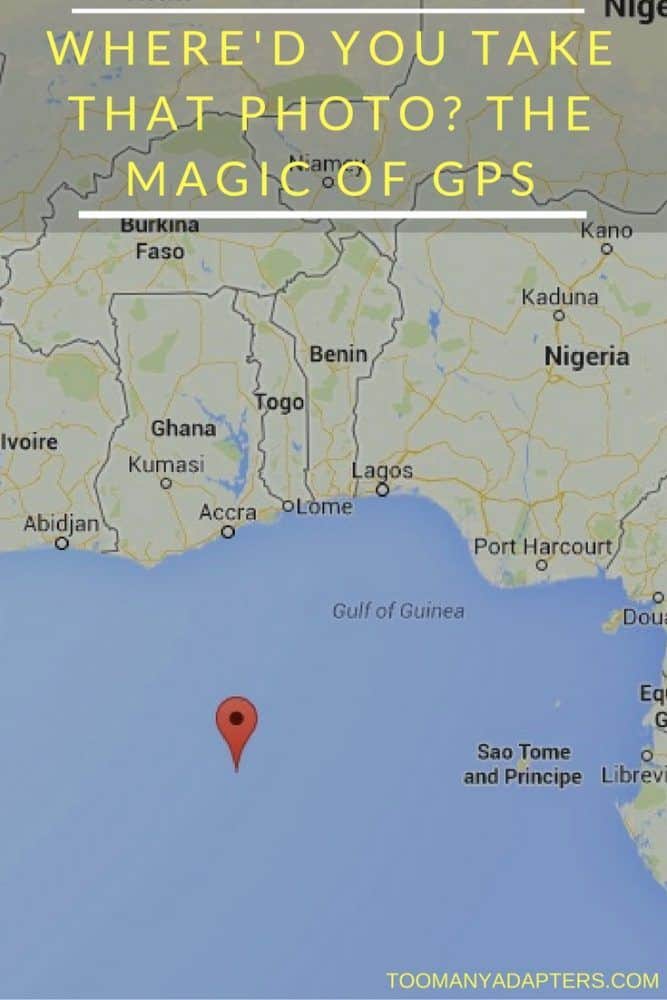