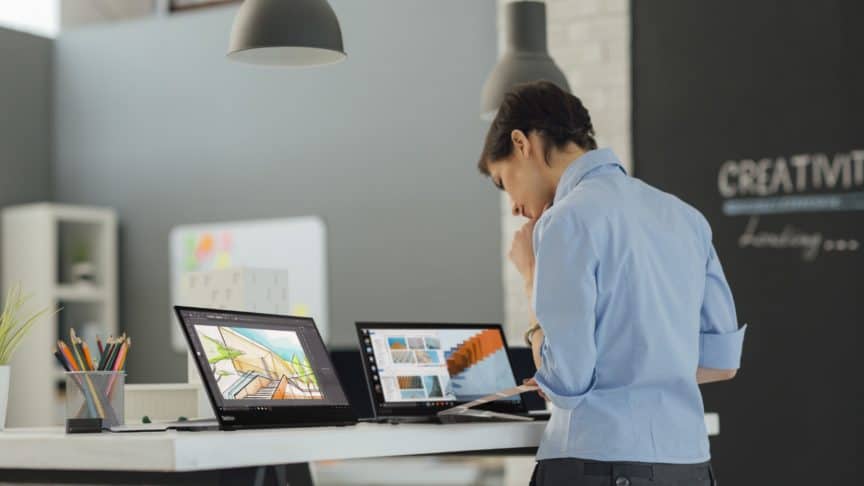 While monitors have been technically “portable” for decades, lightweight models that fit into a carry case rather than a station wagon are a more recent invention. Versions that you’d actually want to use? They’re very new indeed.

While the benefits of a second screen are undeniable, we’ve largely ignored portable monitors on this site in the past. They were just too expensive, had dim displays, didn’t work very well, and were still too big and heavy to really want to take outside the house with you.

That’s all changed in the last few years, as screen technology got better and lighter, USB C got rid of the bulky cables and chargers, and competition drove the price down. Several companies are now making portable monitors worth owning, with sizes and features to suit a wide range of needs.

We’d still suggest using a normal monitor if you work from the same space all the time, since you get much more for your money. If you’re a laptop user who travels regularly, often finds yourself hitting deadlines from the cafe, or needs to set up and take down your home office every day, however, a portable version makes a lot more sense.

Whether you’re on a budget, looking for the lightest version, or need extra screen size or a touchscreen, these are the best portable monitors of 2022.

If we were going to pick the two most important features in a portable monitor, they’d have to be weight and picture quality. Apparently Lenovo had the same idea, and came up with the ThinkVision M14 as a result.

The 14″ display is a little smaller than most of the competition, but it still has the same 1920×1080 FHD resolution that we typically see. This makes for a slightly sharper image than usual, and in this case, a lot less weight. At just 1.3 pounds, it’s significantly lighter than our other recommendations.

The M14 has an unusual design, with the screen connected to a fold-up base via a fancy hinge mechanism. The display itself is just 0.17″ (4.4m) thick, and can be adjusted to an angle anywhere from -5 to 90 degrees. The base unit holds all of the ports and circuitry.

There’s a small “foot” on the front of the base that can be flipped down for extra height, and the monitor stays solidly in place in both landscape and portrait orientation. Overall, there’s a lot more viewing flexibility than anything else on this list.

Color reproduction isn’t the strong suit of most portable monitors, but here again the M14 shines, with accurate colors across the range. It’s also nice and bright, and the anti-glare coating means you’ll still be able to see what’s on the screen even under harsh fluorescents or sunlight.

The monitor has two USB C ports, one on each side. It draws power from the laptop as usual, but also supports 65W power pass-through so you can plug your charger into one side, your laptop into the other, and power both at once. That’s useful if your laptop only has a single USB C port.

Note that USB C is your only connection option: there’s no support for USB-A DisplayLink, HDMI, or anything else. That shouldn’t be an issue with recent laptops, but will be with older ones.

The minimal weight, impressive color reproduction, and sturdy, flexible stand combine to make the ThinkVision M14 our top overall portable monitor pick. As long as you have a recent laptop with USB C, there’s an awful lot to like and very little to complain about.

Asus has been making portable monitors for years, and it shows. The company sells a range of different models, and two have made it onto our list. The Zenscreen Go MB16ACV is the better choice for most people, and one of our top portable monitor picks overall.

The monitor is slim, comparatively lightweight, and relatively attractive as far as these things go. The 15.6″ display is standard for a portable monitor in 2022, as is the 1920×1080 FHD resolution.

A kickstand on the back of the monitor props it up in either portrait or landscape mode, and lets you adjust the viewing angle for the latter as needed. There’s also a standard ¼” tripod hole, letting you use an appropriate mount to lift the monitor up in line with your laptop screen.

There’s a single USB C port on the monitor that handles both display and power, and a USB C cable to use it with. Asus also includes a USB C to USB-A cable in the box, along with appropriate drivers, so you’re able to connect to older laptops as well.

Asus touts various health benefits with this monitor, namely a blue-light filter, flicker reduction, and an anti-bacterial coating. It’s unlikely that any of them would compel you to buy this model by themselves, but they’re useful enough to have.

Brightness and contrast are above average for a portable monitor, but colors can be a little dull, especially in the red part of the range. It’s an issue common to many portable monitors, so if you need the best color accuracy, consider the Lenovo M14 (above) instead.

All in all, this is a portable monitor that gets pretty much everything right. It’s well-made, with good brightness and viewability, and works with both older and more recent laptops. Attractive, reasonably lightweight, and with extras that set it apart from the pack, it’s a solid choice for a wide range of buyers.

You’ve basically got two choices when it comes to portable monitor manufacturers: one of a handful of major brands (Lenovo, HP, Asus) or any number of Chinese companies you’ve never heard of. Lepow is very much the latter, but it’s actually been in the market for quite a while.

The Z1 Pro is an upgraded version of the popular Z1 model, with basic specifications that are exactly what you’d expect from a budget portable monitor in 2021: 15.6″ display, 1920×1080 resolution, mediocre color reproduction.

What sets the Z1 Pro apart from the dozens of other no-name portable monitor brands, then? It’s the little things. For starters, as well as the ubiquitous USB C option, there’s also a micro-HDMI port on the monitor and the appropriate cables to use either option.

The case turns into a stand, as usual, but there are two grooves in the base to give at least some choice of viewing angle. The stand only works in landscape mode, but the monitor itself supports portrait mode: you’ll just need to find a different way of keeping it in position.

For a 15.6″ monitor, the Z1 Pro is surprisingly light at 1.7 pounds. Even with that low weight, there are a pair of speakers built into the monitor, along with a headphone jack. The speakers are quite weak, so you’re more likely to use the ones on your laptop, but still, it’s a nice touch.

The biggest problems with this monitor are the color reproduction and brightness. As with many others, reds and purples appear quite washed out, and while you can change various settings to try and make up for it, the alternative is having every other color look unnaturally saturated.

The brightness level also isn’t great. While the specifications suggest the same nominal 300 nits as our top pick, the ThinkVision M14, the Z1 Pro is a lot dimmer in the real world. It’ll be fine indoors in normal lighting, but don’t expect great visibility in direct sunlight.

If neither of those things is a deal-breaker, the Z1 Pro offers plenty of monitor for not a lot of money in a lightweight and easily transportable package. Throw in a three-year warranty, and you have our budget portable monitor choice for 2022.

If you’re used to having a touchscreen on your laptop display, there’s no reason you can’t have one on your second monitor as well. As the name suggests, the Asus Zenscreen Touch is the touch-enabled version of the Go model mentioned above, with almost exactly the same specifications.

There’s the same 1920×1080 resolution on a 15.6″ display, the same internal battery so you don’t need to draw power from your laptop, and the same muted color palette that’s common to pretty much every portable monitor except the Thinkvision M14.

The main difference, of course, is the screen. Multitouch-enabled, you’ll get full touch support on Windows and some Android devices, limited support on macOS (since it’s not built into the operating system,) and none on iOS. It’s relatively bright for a portable monitor, which is a nice change.

As with the non-touch model, you get an Asus e-ink pencil in the box, but here you can use it for more than holding the screen upright. Whether you’re using your finger or the stylus, the display is reliable and quick to respond to your input.

Controlling the various settings is done via a single button on the bottom of the monitor that’s actually a five-way joystick. It’s one of the better approaches to menu navigation we’ve seen, but there’s also a Windows app that lets you configure many of the same settings.

The Touch works over either USB C or the combination of micro-HDMI and USB-A, and all of the cables and adapters you need come in the box. There’s a pair of speakers built-in, which work fine but are probably no better than the ones you have on your laptop already.

Weighing only slightly more than it’s non-touch siblings, if you’re looking for the best portable touchscreen monitor of 2022, you’ve found it in the Asus Zenscreen Touch.

The vast majority of portable monitors max out at FHD (1920×1080) resolution, and for many users, that’s perfectly fine. For those who want something better, however, options are quite limited, and good options are even more limited still.

That’s why you could do a lot worse than checking out the UPERFECT True 4K Portable Monitor. Reasonably priced and full of features, it’s a display that’s pitched at gamers but is equally useful for anyone else needing a high-resolution portable display at a reasonable price.

The 3840×2160 resolution is coupled with a 60Hz refresh rate, and 3-5ms response time, which means this UPERFECT monitor is no slouch in the specifications department. It has both USB C and mini-HDMI connections, and appropriate cables in the box.

The protective case folds up into a stand, but only in landscape mode. You’ll be able to switch to portrait mode from your laptop settings, but will need to lean the monitor against a solid object or find some other way of keeping it upright.

Brightness levels are quite good, and color reproduction is ok, although not as good as the Lenovo model mentioned above. As with many other portable monitors, stereo speakers are built in, but you’re unlikely to use them in preference to headphones or the ones built into your laptop.

Pricing for this model is usually quite competitive, often not much more than some of the other 15.6″ portable monitors. If you’re looking for something slightly different, UPERFECT also makes a touchscreen version that auto-senses whether it’s in portrait or landscape mode and rotates accordingly, but you’ll usually pay noticeably more for it.

Main image via Lenovo, other images via Amazon 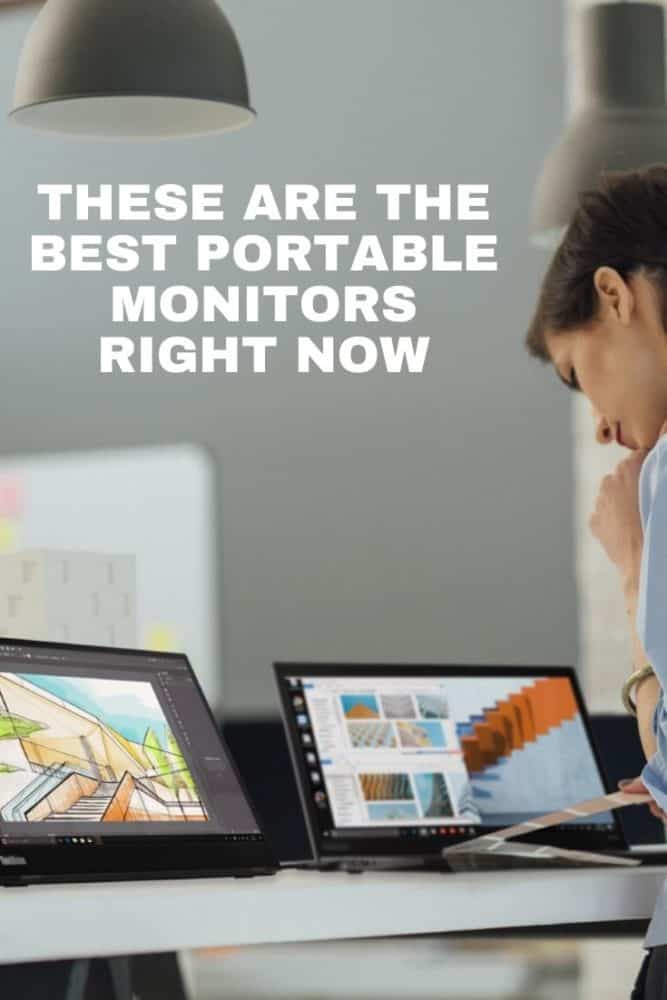