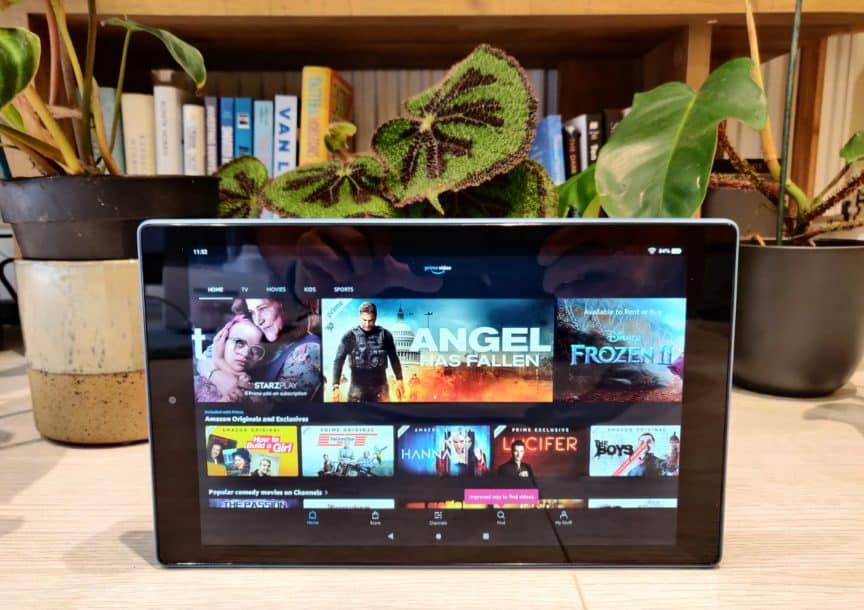 It’d been a long time since I last bought a tablet. Seven years, to be exact, since I’d walked out of a Best Buy in Vancouver, Washington with a new Google Nexus 7 tucked under my arm.

When it finally came time to buy another, both the tablet market and my needs had changed. I no longer had to buy the smallest model, since I wasn’t living out of a backpack anymore. I also wanted it to cost a lot less, because spending a few hundred dollars on a tablet these days feels extravagant.

That’s mainly because budget models have got a lot better since 2013, and cheap no longer has to equal terrible. The best example of that? Amazon’s Fire range, most of which has had an upgrade in the last year and offers a lot of tablet for not a lot of money.

When I saw the company advertising a Fire sale (get it?), it finally pushed me over the edge. I pulled out the credit card, hit the buy button, and started waiting impatiently beside the door. After a week of solid use, these are my thoughts on the Amazon Fire HD 10.

Note: this review is of the 2019 model of the Fire HD 10. Amazon has since released the 2021 version that’s slightly smaller and has minor specification updates, but is otherwise largely the same.

Amazon’s tablet hardware has long been pretty impressive for the money. While other budget tablets generally look and perform like the low-cost devices they are, Amazon’s hardware and design are a step up, and that’s especially true for the “premium” model, the Fire HD 10.

The 10.1″ screen is the most obvious example, a bright 1920×1080 display with clarity and colors that are as good as you’ll get at this price point. If your main use for this tablet will be watching HD content on Netflix (or as Amazon would prefer, Prime Video,) you’ll be more than satisfied here.

The top of the tablet holds most of the ports and controls: a USB C charging socket, headphone jack, power and volume buttons, and a microphone. A covered microSD slot sits on the right edge, with stereo speakers on the left edge. The quality of those speakers won’t blow your mind, but they’re fine for watching shows and playing background music.

The back of the device is a sea of textured plastic, in one of four colors. I went for the blue option, but black, white, and plum are also available. Other than the rear camera and an embedded Amazon logo, there’s nothing else to discuss. The plastic is quite grippy, and the tablet felt secure in my hand despite its large size.

Speaking of cameras, they’re… mediocre. With 2MP sensors both front and rear, don’t expect to be taking photos you want to keep. Video quality is a little better, or at least not much worse than what you’ll get with the webcams on many laptops and budget phones. Not great, but not terrible.

That’s as it should be, really: when almost everyone has a smartphone, there’s little point putting better camera hardware into a tablet that’s harder to hold steady and may not ever be used outside the house anyway. If it makes for a cheaper device, it’s a decision I can get behind.

There’s no fingerprint sensor or face unlock on any of Amazon’s Fire tablets, including this one, so it’s back to the “good” old days of entering PIN numbers or passwords to unlock the screen.

The processor inside the Fire HD 10 has been upgraded since the last model, to a MediaTek 8183 that’s apparently 30% quicker than before. While 2GB of RAM is pretty anemic these days the tablet still feels snappy, with apps and web pages loading quickly and few of the weird slowdowns and stutters you often get with budget Android devices.

You’ve got the choice of 32 or 64GB of internal storage, plus the microSD slot that supports cards up to 512GB. The smaller version has 25GB free when it arrives, which should be plenty for those who only plan to install a few apps and stream most of their entertainment. If you intend to save a lot of video or music on the device or have dozens of apps installed at once, consider the larger size.

The switch from a micro-USB to USB C port is useful for compatibility with other gear you’re likely to be carrying, but thanks to the low-power 9W charger in the box, charging times haven’t changed much.

It took just under 3.5 hours to fully charge using the supplied charger, and about an hour less from a third-party 65W version. There’s an option of upgrading to a better 15W charger, but really it should just be included by default.

Charging the Fire HD 10 might take a while, but at least you won’t need to do it all that often. Amazon rates the battery life at “up to 12 hours of reading, browsing the web, watching videos and listening to music,” and unlike many such claims, I found it pretty accurate.

With screen brightness on two-thirds, streaming HD video for five hours dropped the battery level to 60%, while reading for a further two hours drained it to 47%. The 12-hour battery life claim seems very believable based on that, and you may even get a bit longer depending on what you’re doing.

Amazon’s approach to its devices is simple: sell decent hardware at low prices and make the money on services instead. It’s worked extremely well for Alexa smart speakers and Kindle e-readers, and the company is clearly doing the same with its Fire tablets as well.

While the operating system (FireOS) is based on Android, using it is quite different from the usual Android experience. Amazon starts hawking its wares almost from the moment you first hit the power button, with a series of setup screens asking you to sign into or up for an Amazon account, Alexa, Prime, Goodreads, Kindle, and a range of other services.

That doesn’t change once you get to the home screen, with almost every available space filled with default apps. Over a dozen of them are for Amazon services, with the rest being generic tools like a calculator, calendar, maps, and so on. You can’t remove them, but you can at least drag them all into a single folder and never see them again.

Several other tabs are available with a swipe or tap, which again correlate with ways that Amazon makes money. Books, Video, Shop, Music, they’re all there. By default you’ll be shown things that “may interest you” (ie, Amazon would like you to buy), but you can turn that aspect off. The tabs remain, but will just show things you’ve already purchased instead.

Even the lock screen is one big, full-page ad for something you can buy from Amazon. If those ads annoy you sufficiently, you’ll need to pay $15 (or local equivalent) to remove them.

The biggest difference, however, is app availability. Google’s range of apps and services don’t come pre-installed on Fire tablets, and that includes the Play store. Amazon has its own app store, and while it has a reasonable set of options that cover most needs, the selection isn’t really comparable.

How much this matters will depend entirely on how you plan to use your tablet. If you’re already embedded in the Amazon ecosystem, you’ll barely notice the difference. Likewise, if all you want to do is watch Netflix, browse the web, check the weather, and play a few games, it’s not going to matter at all.

If you have a bunch of Google or other Play store-only apps you need to use, want to play the latest games, or have more specialized requirements, however, you’ll likely hit a wall in the Amazon app store sooner rather than later.

Fortunately it’s possible to set up the Play store on the Fire HD 10, and once that’s done, you’ve got access to almost all of your usual apps. A few of them (including Netflix) make themselves unavailable to Fire tablets through the Play store, but you can generally just install them from the Amazon app store instead.

Guides to installing the Play store on Fire tablets are available with a quick Google search, and while you understandably won’t get any support from Amazon if things go wrong, it’s not prohibited either.

I tested around two dozen different apps and games on the tablet, installed from both the Amazon and Google app stores. Everything from Netflix and Twitter to the Firefox browser, YouTube, and various news apps worked as expected. Even demanding games like Asphalt 9 ran well, and as you’d hope, using Amazon’s own tools like the Kindle, Audible, and shopping apps was seamless.

In a more real-world test, I used the tablet for a couple of hours a day like most other people would: reading articles, browsing social media, watching shows, and finding recipes to use up the random vegetables about to expire in my fridge. Other than sometimes wishing I’d bought a case or stand to prop it up, I really had nothing to complain about. It just did exactly what I expected it to.

When rating the Amazon Fire HD 10, there’s a distinct difference between the hardware and software experience. You won’t find better hardware for the money: the screen, performance, battery life, and general look and feel are leaps and bounds ahead of any other tablet in the same price range.

The software is a different story, at least for customers whose needs go beyond what’s available in the Amazon app store or who don’t like being pushed towards the company’s services. The former problem can be worked around by installing the Google Play store, but the latter will always be there to some extent.

If you’re looking for a good low-cost tablet and already use a bunch of Amazon services, buying the Fire HD 10 is a no-brainer. Likewise, if your priority is good hardware at budget prices and you don’t mind being advertised to, this is absolutely the tablet to buy.

If you’re used to using other Android devices, though, or just don’t like being nudged to spend money in the Amazon ecosystem, the decision is a bit more nuanced. You can get access to almost all of the apps you’re used to with a bit of work, and likewise many of the “nudges” can be hidden or disabled, but there’s still no mistaking this for a standard Android device.

Does that matter? For most people buying the Fire HD 10, the answer is no. It offers more than other tablets costing twice as much, and if that comes with a few trade-offs, for many it’s a price worth paying. As it turns out, it was for me as well.

Main image and screenshot via author, other images via Amazon