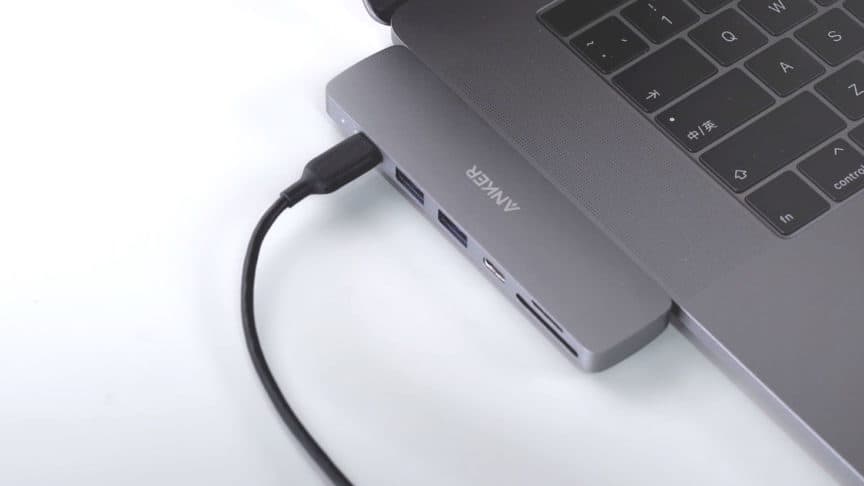 Of all the companies that have removed expansion ports from their laptops in recent years, Apple has been the most ruthless about it. The 12″ Macbook only had a single USB-C port, for instance, while the latest Macbook Air and some Macbook Pro models have just two.

Given you’ll often be using one of those ports for charging, that doesn’t leave much (or any) room for plugging in anything else. Even if you do have a spare USB-C port, you’ll often still need adapters and accessories to read an SD card, backup to a hard drive, connect a monitor or projector, and more.

Cutting out ports and slots makes a laptop slightly thinner, but it also makes it less useful. Realizing this, third-party companies like Anker have stepped in to fill the gap with multi-purpose hubs that give back the features that laptop makers have taken away.

Most such hubs are generic devices intended to work with a wide range of laptops. Anker offers those as well, but if you’re a Macbook Air or Pro owner, the company also makes a slimmer, sleeker model designed specifically for those models. Anker sent one out so I could see whether the gadget’s performance matched its looks.

Designed to sit along the left side of the laptop, the hub plugs into both USB-C sockets. It fits snugly, to the point where it’s unlikely to work if you’re using a case. Almost all of the device’s usable ports sit along its outer (left) edge, along with a tiny LED light to let you know it’s connected. The larger HDMI socket is on the top edge.

The Thunderbolt 3 port can be used both for charging the laptop itself and charging other USB-C devices. The second USB-C port and both USB-A ports aren’t for powering other devices, however: they’re intended solely for data transfer.

Like most Anker accessories, the hub arrived in a small nondescript box. Inside sat the device itself, a small soft pouch to prevent damage in transit, and a basic instruction manual.

This hub is designed solely for use with recent-ish Macbook Air and Pro models, so obviously the first thing I tried to do was plug it into something different. The spacing between the two USB-C ports on my Lenovo Yoga 920 wasn’t the same, however, so that was the end of that idea.

As you’d imagine, it worked a lot better on a Macbook Pro. I tested it with both the 2017 and the latest 2020 model of that laptop, and it fared equally well with both.

I was impressed with just how small and light the hub was. Given its tiny dimensions and the soft case it comes with, there’s no reason it couldn’t live inside a laptop sleeve when you’re on the move. If you keep it in a day bag instead, you’ll never know it’s there.

While it’s clearly intended to sit on the left side of the laptop, if you’ve got a Macbook with four USB-C ports, it works when plugged into the right-hand side as well. It hangs awkwardly out the back of the laptop and the HDMI port faces towards you rather than away, but if you really wanted to use it that way, you could.

First up: charging. I measured the power draw from the wall charger plugged directly into the laptop, and then going via the hub’s Thunderbolt 3 port. The two readings were very similar (if anything, the Macbook drew slightly more power through the hub), and charging speeds weren’t affected.

Going the other way, I charged a couple of different smartphones from the hub’s Thunderbolt 3 port. They both charged at full speed, with an Android phone reporting it was “charging rapidly” while drawing nearly 8W of power. So far, so good.

Less good, however, was charging from any other port. Anker specifically says they’re only meant for data transfer, and it’s not lying. The second USB-C port didn’t output any power at all, while the USB-A ports put out a woeful 0.5amps (2W). If you’re looking to charge multiple USB devices at once, this isn’t the hub for you.

Using the ports for their intended purpose, however, worked well. A Time Machine backup to a USB-A hard drive sped along rapidly, as did copying files to a thumb drive. Disk benchmarks to the hard drive stayed around 100MB/s for both read and write, exactly the same as when the drive was connected via a dongle instead of the hub.

Plugging both drives into the USB-A ports, I ran a Time Machine backup while simultaneously copying a large video file from the thumb drive to the hard disk. That worked fine, and file transfers to and from either of the card readers were nice and fast. There was also no problem running a monitor or 4k television over either HDMI or Thunderbolt 3.

While the hub got noticeably warmer under heavy load, it never got uncomfortably hot even after a few hours of charging and file transfers. I could get the hard drive to disconnect and monitor to flicker if I jiggled the laptop and hub hard enough, but had no problems during normal use.

Overall, I liked the PowerExpand Direct 7-in-2 USB C Hub for MacBook. It did everything it promised to do, even under heavy load. From backing up my laptop and copying files from a range of devices to watching shows on a 4K television, it didn’t skip a beat.

Attractive, simple, and lightweight, it’s an easy way of reclaiming many of the ports that have disappeared from modern laptops. Coming from a respected manufacturer like Anker, and with an 18-month warranty in case you do have any problems, it’ll fit the needs of many Macbook owners.

As useful as the hub is, though, it’s not perfect. The biggest miss is only having a single Thunderbolt 3 USB-C port. Since both of the ports that the hub plugs into on the Macbook are Thunderbolt 3, you’re losing functionality by using it.

That’s less of an issue if you have a Macbook Pro with four USB-C ports, since you can just use the ones on the other side. If you’re using the hub with a Macbook Air or lower-end Macbook Pro with only two ports, however, you can’t charge the laptop and run an external USB-C display simultaneously.

If the above applies to you, you’ll probably be better off with one of Anker’s other offerings. The 7-in-1 version isn’t as small or sleek, but it also only takes up a single USB-C port, leaving the other one free. It’s typically also cheaper, but everything else stays pretty much the same.

The hub would also have been more useful if the USB-A ports put out a meaningful amount of power. There’s always something that needs charging from an old-style USB port, and it’d be handy to plug them into the hub as needed. It’s not the end of the world, but it’d be nice to have.

Depending on how you plan to use the PowerExpand Direct 7-in-2, these concerns will either be a real issue for you or no problem at all. If you fall into the latter camp, and especially if you plan to travel with it, this sleek little hub is well worth buying. If not, and you don’t mind a bit of extra size and weight, go for the 7-in-1 version instead.

Sometimes it’s good to have choices in life.