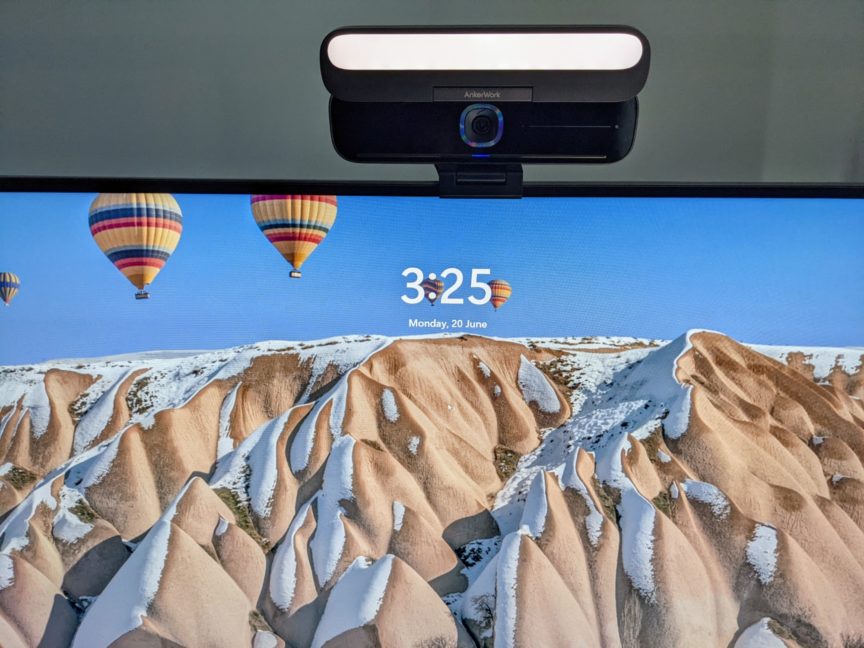 Anker has long been one of my favorite accessory makers, putting out quality chargers, cables, batteries, and the like at reasonable prices. Buoyed by its success, it expanded into other areas in recent years, from audio and home security to 3D printing and office equipment.

The last of those areas, labelled AnkerWork by the company, focuses on things like speakerphones, headsets, and webcams. It’s also the home of the B600, a product labelled as a “video bar”.

If you’re anything like me, your first question will likely be what the hell is a video bar? At least according to Anker, it’s a combination of a webcam, microphone, speaker, and adjustable light inside a single device. Glad we cleared that up.

Clearly aimed at the working-from-home crowd who are sick of looking and sounding awful on Zoom calls, it has the potential of being a useful, albeit niche, device. It’s notoriously difficult, however, for multifunction gadgets like this to work as well as dedicated tools.

Is the B600 any different in that regard? Is it worth the asking price, or would you be better off just buying a better webcam and headset instead?

Anker sent out a review sample so I could decide for myself.

Anker puts some effort into the unboxing experience for its higher-end products, and this was no exception, all thick cardboard and nicely-arranged accessories. Other than the device itself, there was a USB C data cable, a 10W power adapter with US, UK, and EU plugs, and some basic instructions.

When you remove it from the box, the B600 is surprisingly large but otherwise non-descript. Weighing just over a pound and roughly seven inches long, there’s a featureless plastic cover along the front and a folding mount on the bottom. The rest of the device is covered in black fabric, giving it a plain, professional aesthetic.

Things get more interesting when you flip up the cover. There’s a cylindrical LED on the back that runs nearly its full length, below which sits a 2K webcam and a touch-sensitive slider to control the lamp brightness.

Stereo speakers complete the mix, one on each side of the device. The other control buttons are also on the sides: mute on the left, and an on/off toggle for the lamp on the right. A light underneath the camera shows at a glance if you’re muted: red if you are, blue if you’re not.

There’s a four-microphone array inside the B600, with active noise cancellation that lets it isolate your voice in noisy environments. It also monitors how far you are from the mics, keeping the volume of your voice the same even when you’re around six feet away.

On the back, a pair of USB C sockets correspond to the two cables in the box. One goes to a wall outlet, the other to your computer. They’re clearly labeled which is which. There’s also a USB-A socket that works with a few of Anker’s headphones, but annoyingly, there’s no standard audio jack.

That’s frustrating, since it makes it harder to use the webcam with your favorite wired headphones. Not impossible, typically, but harder.

The B600 turns itself on automatically when you open up the cover, and off again when you reverse the process. Even if it didn’t, since the cover physically covers the webcam when it’s folded down, there’s no danger of accidental filming here.

The first thing you’ll need to figure out is where you want the B600 to sit. This will depend largely on whether you’re using a monitor or not: given the size and weight, it’s too big and heavy to perch on the top of your laptop screen.

Those without a separate monitor do have an alternative, at least. The mount on the base unscrews to reveal a standard 1/8″ tripod thread, so you can attach it to something like this, or pretty much any other tripod you happen to have.

If you are sitting it on a monitor, as I was during my testing, the stand folds out and down to stabilize the B600 against the back of the screen. It works well, letting you angle the webcam up and down (or for that matter, left and right) without any danger of it falling off.

There is one issue with sitting it on top of your monitor, though, and it’s a problem that could have been so easily avoided. The USB C data cable is barely two feet long, which may be enough if you’re using a laptop, but almost certainly won’t be if you’re connecting to a desktop or tower PC on the floor.

It’s not hard to find a 6ft or longer cable (unsurprisingly, Anker sells one), but given the price of this device, you’d expect it to come in the box.

Once plugged in, my Windows 11 laptop detected the B600 as a standard webcam. I could switch backward and forward between it and the inbuilt camera/microphone/speakers without a hitch in apps like Skype and Zoom.

While you don’t need to install the companion AnkerWork software to use the device, you probably should. It’s refreshing simple, in a way that these sort of apps often are not, and gives access to a bunch of useful settings and features.

You can change things like the camera resolution (from 360p to 2K), brightness and saturation, and whether you want the light to come on automatically when needed. You can also change the LED color temperature, which is ideal if you’re looking to correct ambient lighting that’s overly cool or warm.

It’s also possible to change the field of view (FOV) between 65 and 95 degrees: the larger the number, the more of the background is visible. There’s also a useful “Solo-Frame” option, which works much like Apple’s Centre Stage feature, zooming in and out and keeping you in focus as you move around.

I tested the device in a few different ways: playing around with the settings inside the AnkerWork app, making a couple of hours of video calls on the desktop versions of Skype, Zoom, and WhatsApp, and streaming music via Spotify.

Regardless of which app I was using, one thing was immediately obvious: the B600 was significantly better than my laptop’s inbuilt webcam and speakers. The clarity and exposure was vastly improved, even in daylight but especially in a dimly-lit room.

The screengrabs above show this pretty clearly. They were taken on a sunny day, firstly with the blinds up, and secondly with them mostly down. As well as the obvious clarity improvement that comes from a 5MP 2K webcam versus a 1MP 720p, you can see how the lightbar evens out the lighting on the side of my face that’s closest to the window in the second set of images.

There’s a slight “Photoshop” effect going on with the B600, where it looks like my head has been superimposed on the dark background. It’s not bad, and wasn’t apparent during the actual video calls, but it looks a bit odd in the still images!

The two-watt speakers in the device were reasonably loud, certainly more than enough for video conferencing. They’re tuned for voice frequencies, and it showed: audio during calls was crisper and clearer than usual, and podcasts also sounded good. Music, especially bass-heavy tracks, felt a little thin, but I was ok with that: this isn’t intended to be a replacement for your home audio system.

After trying out all of the various settings in the AnkerWork software, I ended up leaving more of the automatic options enabled than I’d expected. Solo Frame worked well, keeping me centered and in focus when I moved around, but staying out of the way the rest of the time.

Likewise, after experimenting with manual settings, I set the light to automatically adjust. It did so as needed, getting brighter in low light and switching almost completely off in broad daylight.

I asked everybody I called to compare the difference at their end as I switched between webcams, and the consensus was clear: video was significantly better. The audio improvement wasn’t as noticeable when I was close to my laptop, but became more obvious as I moved further away. The noise cancelation worked well, removing the sound of barking dogs nearby.

Who Is It For?

Overall I was impressed with the AnkerWork B600 Video Bar: it’s an unusual device, but one that achieves what it sets out to do. It’s fairly expensive, though, at least compared to a standalone webcam, so it’s worth exploring who this device is actually for.

I see it being being particularly valuable if you have a desktop PC, especially if it didn’t come with a webcam or you’d prefer not to wear earbuds or headphones while on a call. You’ll already have a monitor to sit it on, can avoid having a bunch of extra gear and cables cluttering your desk, and will look better thanks to the inbuilt light.

If you’re dissatisfied with the video or audio quality on your laptop, it may also work for you, particularly if you already use a monitor or don’t mind using a tripod. It’ll deliver better results than the vast majority of laptop webcams, but the price makes it a somewhat harder sell unless you’re really unhappy with your current setup.

The device is a bit too large for most people to travel with, especially since you’ll also need a tripod unless you know you’ll have access to a monitor wherever you’re going. As an office (or more likely these days, home office) video conferencing tool, however, it’s much more compelling.

All of that to say, I like what Anker has attempted with the B600. It’s not for everyone, but is still a useful, high-quality device that performs well and delivers on its potential, at least for its intended audience. If you fall into that category, it’s very much worth considering.

Product shots via Amazon, other images via author 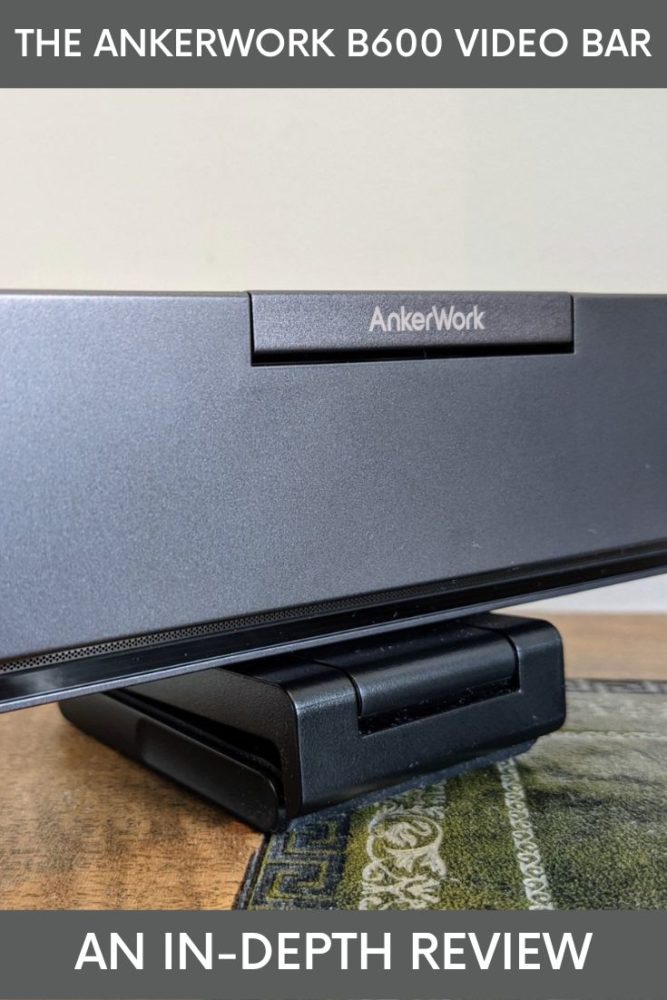