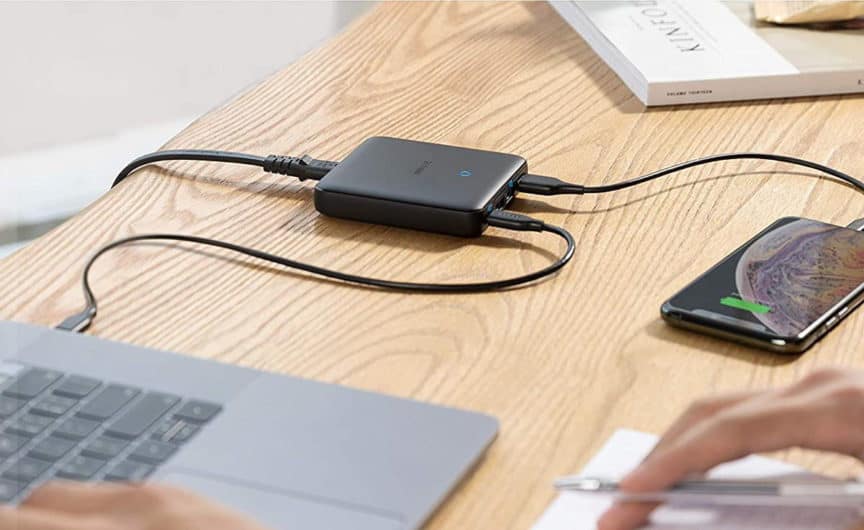 Anker has released a wide range of wall chargers in the last year or two, quietly reducing their size and weight while increasing their power output. They’ve put out tiny phone chargers, versions with half a dozen USB ports, and models with enough juice to charge any laptop without breaking a sweat.

Now, the company’s taken that expertise and started to focus on chargers that can do a bit of everything. Charging a laptop, phone, and tablet from a charger small enough to fit in your pocket used to be a pipe dream, but based on what showed up in my mailbox a few weeks ago, that’s no longer the case.

That size and weight doesn’t include the power cable, which at five feet is longer than most and plugs into a wall socket. It has a velcro strap to keep it tidily wrapped, but if you were traveling and really wanted a shorter version, you could use any standard cable with a figure-8 plug.

A plain device, the only things on the top are a tiny logo and a subtle circle that lights up blue when the power’s connected. The wall cable plugs in the back, and the front houses all of the ports: a USB-C 45W PD socket, and three USB-A sockets that share 20W of power between them. You’ll get a maximum 12W (5v x 2.4a) out of any of the USB-A sockets.

There’s little else in the box, other than a velcro strip to keep the charger stuck firmly in place on (or under) your desk if you don’t plan to move it much.

I tested the charger in a couple of different ways: a series of stress tests over a couple of days, and then using it as my everyday charger for three weeks to confirm its reliability.

To start with, I repeatedly drained a laptop and two smartphones down to 50% battery, then charged them individually with both their usual charger and the Powerport III. For the phones, I tested the USB-C port and one of the USB-A ports separately.

As you can see, the Powerport’s 45W maximum output can’t match that of the 65W factory charger that came with the laptop.

No such problem when charging the Pixel 2, however. There was no difference between the output of my usual 15W charger and the Powerport III’s USB-C port, and minimal difference when using a USB-A port instead.

Even more than with the Pixel 2, there was no difference between charging a OnePlus 6T smartphone with a standard charger versus using any of the ports on the Powerport III.

Power measurements are one thing, but for most people, it’s more useful to know how long charging actually takes. Because modern devices slow their charging rate as they approach capacity to avoid damaging the battery, there’s often less difference than the raw numbers might suggest.

The smartphone charging speeds were essentially the same no matter what I used, but the laptop was a different story.

That difference isn’t huge, and wouldn’t be the same with every laptop. Our top travel laptop pick, the Dell XPS 13, ships with a 45W charger, for instance, while Apple's latest Macbook Air only has a 30W version. In either case, there’d be little to no difference in charging speed if you used the Powerport.

In my final tests, I plugged in a range of devices, separately and together, to see if there’d be any drop in power output. There was no measurable difference as I connected and disconnected the laptop, two phones, a set of Bluetooth headphones, and a couple of portable batteries.

I also monitored the Powerport’s temperature when it was charging the laptop along with other devices, as small chargers can often get very hot when they’re working hard. While it certainly got noticeably warmer after an hour or two, it never got uncomfortably hot.

Unlike the stress testing, which took several hours and various pieces of measuring equipment, the everyday testing required me to do, well, nothing.

I already have a bunch of charging cables on my desk for a laptop, phone, headphones, and Fitbit, so I simply plugged them all into the Powerport III instead.

For around three weeks, it was the only charger I used. The laptop and phone stayed connected most of the time, while the micro-USB and Fitbit cables got used once every few days.

As you’d hope, everything worked just as expected. My laptop was always fully charged whenever I took it off the charger, as was my phone. I didn’t notice any disconnections or slowdowns in charging speed, either. Basically, it just worked as advertised.

In short, I liked the Anker Powerport Atom III a lot. Being able to fit this much power and flexibility into a charger this small is impressive, especially because you’re sacrificing so little to do it.

There’s no reason you couldn’t use it as an everyday charger for a laptop, phone, and tablet at home, then drop it in your bag to head to a cafe or the airport. It was rock-solid throughout my testing, and although it warmed up under heavy load, it never got particularly hot.

While it’ll charge many laptops a little slower than usual, the difference in the real world is likely less than the specifications might suggest. For many people, the convenience of having a single charger that does everything will be easily worth the wait, especially when they’re on the move. 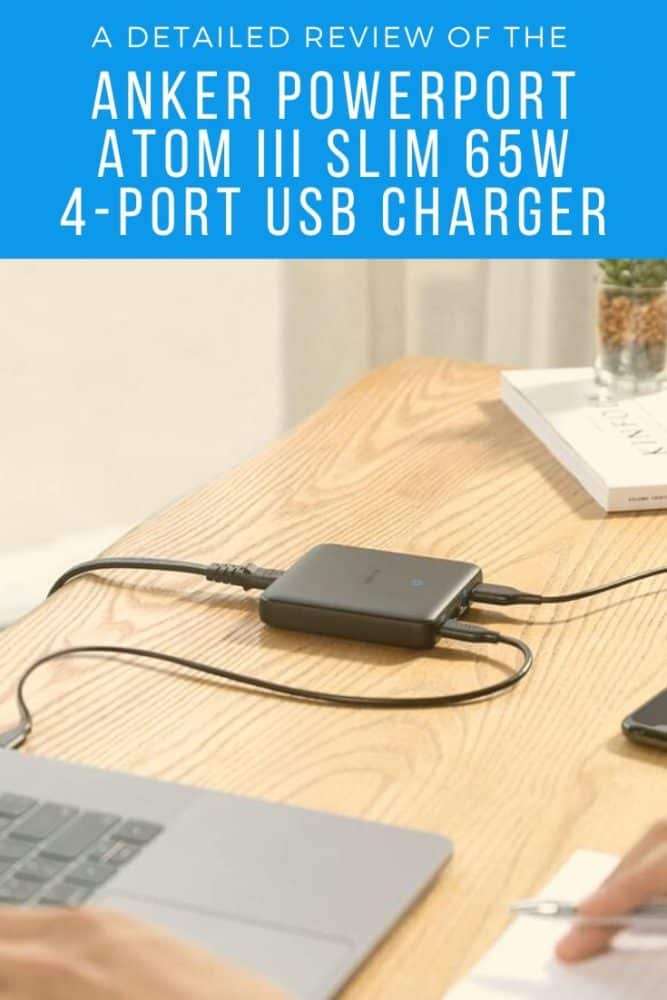