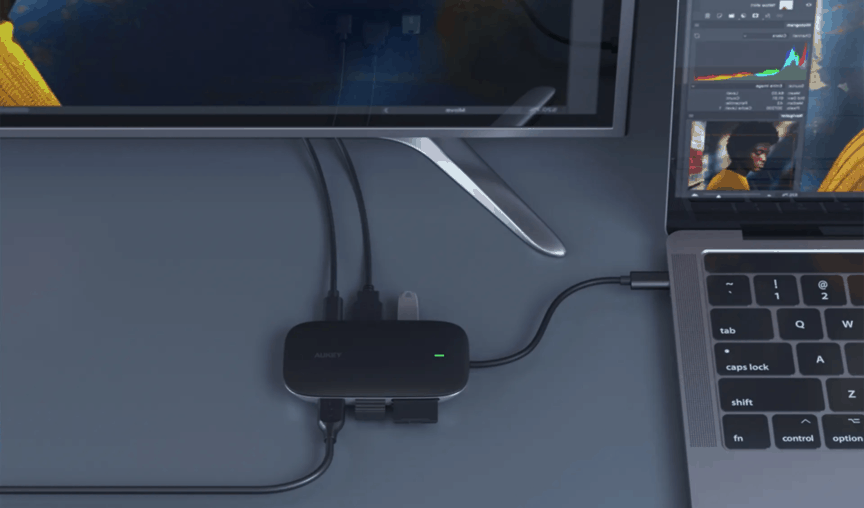 As laptop makers continue their relentless drive to make everything smaller and lighter, they’ve been increasingly ruthless about the ports and sockets they include.

When I look back at my old laptops, they had HDMI and network ports, SD card readers and microphone sockets, and enough USB ports to handle all the accessories I’d ever want to use. These days, it’s not unusual to get nothing more than a couple of USB-C ports, and you’ll need to use one of them for charging as well.

Sure, that helps keep the size and weight down, but it’s at the expense of, well, doing things. Need to copy files to a flash drive or take photos off your camera’s memory card? Want to plug into a TV or monitor or physically connect to a network or printer? It’s time to descend into dongle hell… unless you’ve got a USB hub.

These devices come in all shapes and sizes, but the basic premise is the same: to let you easily plug a wide range of accessories into computers that don’t have the ports built-in.

Aukey is one of those Chinese electronics accessory companies that flies under the rader a bit. The company has been turning out useful little gadgets for years, but doesn’t have the brand recognition of competitors like Anker.

The USB hub arrived in a small box, and the device inside was even smaller, fitting into the palm of my hand. If you’re planning to take this hub with you to the coffee shop or on your travels, it’s not exactly hard to find the space for it in your bag. When you do, there’s a soft carrying pouch to help avoid scratches and minor dents.

It’s an understated piece of equipment, essentially a black oblong with a short USB-C cable on one end, power indicator on the top, and a bunch of sockets on both of the long edges. Those sockets include:

That’s a pretty good selection for a device so small, and other than perhaps one more USB-C port, there’s nothing missing from this hub that I’d be likely to regularly use.

It’s worth mentioning a few caveats up front, however. With that maximum combined output of 4.5W (5V @ 0.9A), the USB-A ports are clearly designed for plugging in accessories rather than charging your devices, and there’s a recommendation to that effect in the manual.

The SD and microSD slots must share a controller, since you can’t use them both simultaneously. If you were planning to use this hub to copy files between two memory cards, you’ll need to copy them to your laptop or a USB drive first.

If your laptop uses a USB-C wall charger, the instructions also suggest plugging it into the hub if you’re connecting a bunch of accessories, or something that needs extra power like an external hard drive.

Finally, the USB-C port doesn’t support data transfer. This means you can’t plug storage devices into it, or use it to connect to an external monitor. It’s strictly power-only.

Right, onto the testing.

My main machine is a two-year-old Lenovo Yoga 920, and that’s what I used to do all of my testing. It has a pair of USB-C ports on one side, so I unplugged my power cable from one of them, connected it to the hub, and plugged the hub into the newly-vacated socket. Easy.

Well, easy if you don’t use a laptop stand, at least. The hub’s cable is less than six inches (15cm) long, which means your laptop really needs to be sitting on your desk if you don’t want to leave the hub flapping around in the breeze when it’s connected.

It’s a fine balance, since having a bunch of extra cable is annoying when you don’t need it, but a bit longer would have been helpful. If you’re in the same boat, you can buy a USB-C extender cable as needed.

The power light turned green when the hub was connected, and I was good to go. To start with, I tested each of the USB-A ports separately and together with a range of accessories: USB sticks, Wi-Fi range extenders, a portable hard drive, and anything else I could find.

Each of them worked as expected, with the laptop recognizing them as if they were directly connected. Copying files to the storage devices also worked fine, and it took a little under half an hour to move 85GB of photos onto the hard drive. Drive read/write speed tests were exactly the same as when it was plugged into my laptop’s USB port.

Leaving everything connected, I moved onto the card readers. Again, the hub had no problem recognizing either the SD or microSD card, although as per the instructions, not both at once. Moving files around worked as expected.

Connecting the HDMI cable from a 4K smart TV saw the laptop’s display instantly mirrored on the screen. I don’t have the test equipment to compare the display differences in detail, but playing a Netflix movie on the laptop versus directly on the television looked very similar to my eyes.

Putting my laptop in flight mode, I then connected an Ethernet cable to the hub. Without any prompting, my laptop detected a new network card, obtained an IP address, and connected automatically. I had no issues browsing web pages or downloading files as fast as my internet connection could handle, with speed tests slightly faster than on Wi-Fi.

As mentioned, the instructions recommend against using the USB-A ports for charging, but that wasn’t going to stop me trying. I tested with a variety of phones and other accessories, and couldn’t manage to get more than about 2W (5v @ 0.4amps) going to any of them.

That’s enough for older USB accessories like headphones, but phones and tablets would take forever, assuming they charged at all.

For the final tests, I removed the laptop charging cable from the hub. I first connected a USB-C monitor to confirm that the USB-C port didn’t support data transfer: as expected, nothing appeared on the screen.

I then reconnected the portable hard drive and re-ran the speed tests. Despite the warnings in the manual about needing external power, it worked fine, with no change in read or write speeds.

Last but not least, I tried to charge my phone from the USB-C port, which worked much better than the USB-A ports. At a little under 6W, it was almost exactly the same charge rate as using a generic wall charger.

All in all, the Aukey Link PD Pro is a great little device for the money. It has the right mix of features for most people, in a size and weight that make it equally useful inside or outside the house. All of the ports and sockets work as they’re intended to, and in some cases, even better than that.

That said, it’s not without its limitations. The very low charging speeds from the USB-A ports is baffling from a 100W hub like this, and mean it isn’t quite the “do everything” device it otherwise could be.

While most people won’t need simultaneous access to the SD and microSD slots, it’d still be good to have, while a slightly-longer cable and an extra USB-C port wouldn’t go amiss either.

Overall though this hub gets most things right, at a price that’s easy to justify. If your laptop is missing a few essential ports and you don’t want to deal with endless dongles and accessories, you could do a lot worse than picking up the Aukey Unity Link PD II USB-C hub. Recommended. 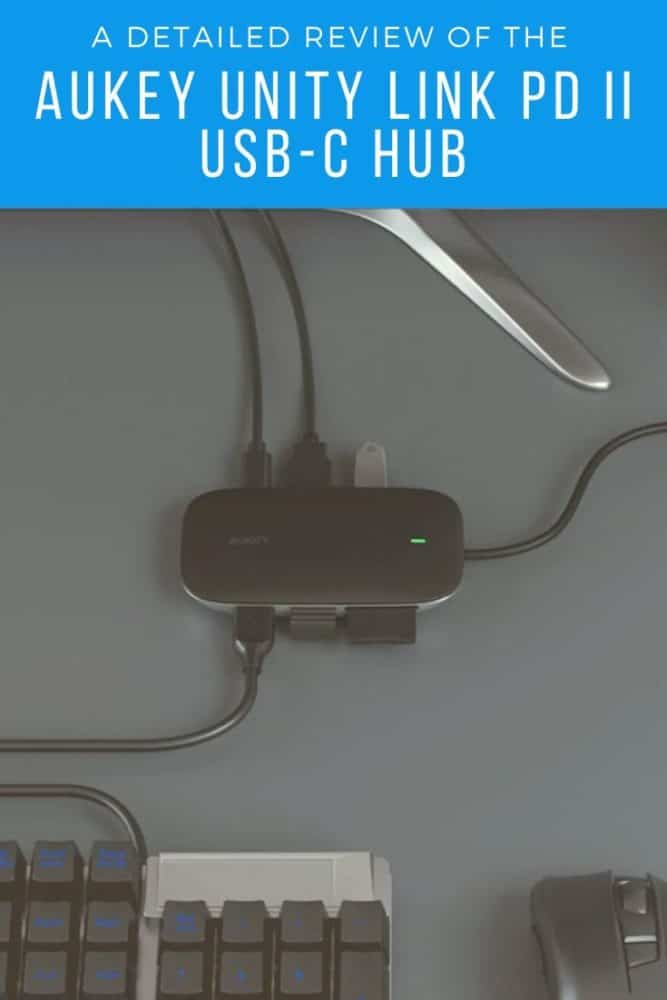