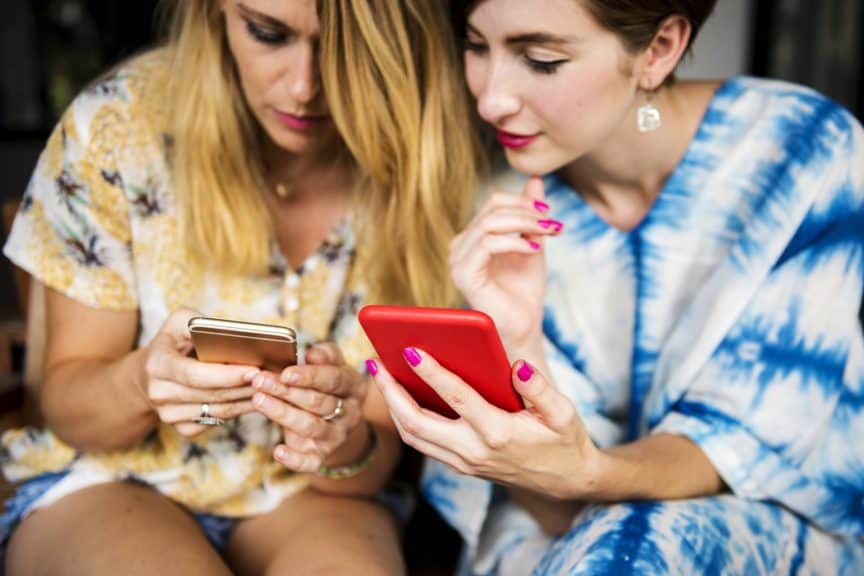 Language barriers remain one of travel’s biggest challenges. While being able to talk to the locals can greatly enhance your trip, the reverse is also true. Mishaps and misunderstandings are all too common when you have no idea what’s going on.

Fortunately, translation apps and devices have grown increasingly sophisticated over the years and can be extremely useful when you’re overseas. Some aim to cover as much of the world as possible, while others specialize in specific regions, languages, or requirements.

While many require an internet connection to function, others can work partially or entirely offline. That’s particularly useful if you don’t have a local SIM card, mobile hotspot, or other affordable way of staying connected overseas.

These are eight of the top translation apps for iOS and Android users plus a couple of the best translation devices, to help keep you in the know wherever your travels may take you.

Google Translate is an indispensable tool for any traveler. With over 100 languages on the mobile app, half of which include translation of text from a photo, it’s the most comprehensive option available.

It’s probably the best offline translator right now, with support for many (although not all) languages, and the volunteer community continually improves the translated results. “Conversation” mode seems tailor-made for travelers, translating speech in both directions as two people speak to each other in different languages.

Conveniently integrating with other apps for on-the-fly translation, and entirely free to use, you may wonder why we even need other translation apps if Google Translate is so good. The reality is that while it’s a great tool, it’s not perfect for every situation.

That “Conversation” feature is a bit clunky to use in the real world, for instance, and there are no phrasebooks, educational resources, or other tools to help learn the language yourself. Google Translate is definitely the king, but there’s space for other translation apps as well.

Microsoft Translator is arguably the biggest alternative to Google’s version, with many of the same features. The app provides general translation functionality (via text, audio, or image), and you can pin translations for later reference.

The translation aspect itself is probably inferior to Google Translate, but its the Phrasebook tool that makes Microsoft Translator stand out. Just like in the olden days of travel, when people carried around quaint phrasebooks with tattered pages, there’s a large list of useful phrases within the app.

Some are very general, such as “Thank you,” “How much?” or “Is there an ATM?” — the kind of basic, essential phrases we’re all likely to need on the road. That’s just the beginning, though, with many other options across several categories including dining, technology, health, emergency, and travel.

The phrasebook feature alone makes Microsoft Translator a handy tool, especially if you pair it with Google Translate as well. While it’s great to be able to translate words and phrases when you need to, it’s even better to be able to learn at least the basics so you don’t always need to reach for your phone.

Looking for an app that specifically focuses on translating conversations? Speak & Translate will be right up your alley, even if the premium version comes with a relatively high price tag. It’s sleek and very easy to use, in contrast to the clunky Conversation portion of Google Translate.

You can access your translation history (a handy tool for travelers!), and set various options such as how quickly the translated text is read out, or whether you’d prefer a male or female voice.

The ad-supported free version includes all of the basic features, and will be enough for many people. Pull out the credit card, however, and you’ll be rewarded with offline translation between ten languages, no limit on the number of daily translations, and removal of the ads.

Speak & Translate isn’t necessarily a tool for every traveler, but for those who want a better, more seamless conversational experience, it may well be worth the money.

If you want an alternative to Speak & Translate (above), check out SayHi. Like many other conversation apps, it focuses on providing a user-friendly experience for conversations between people who don’t speak the same language.

The app has strong support for regional language variations. Words can be translated into the particular dialect of Arabic spoken in Egypt or Bahrain, for example, or the Mandarin spoken in mainland China or Taiwan. Spanish options are particularly robust, with eighteen areas covered in total.

Again, you can choose if the voice is male or female, and select the speed of the voice. For language learners, there’s the companion “SayHi Learn” app, which includes educational tools for studying Spanish, French, Danish, and German.

The only real downside of SayHi is a lack of offline access, but otherwise, it’s a fantastic free tool, especially for Android users who don’t have access to Speak and Translate.

There are tons of Spanish translation apps out there, but SpanishDict Translator is particularly good. Type in a word or phrase, and the app can translate it, look up its definition, or if it’s a verb, conjugate it for you.

The app also works as a general education resource, including an extensive grammar guide covering a range of topics (like the differences between ser and estar, for example.) There’s also a phrasebook that’s divided into multiple categories, along with helpful guides for topics like “how to talk about measurements in Spanish.”

The app is essentially a Swiss-army knife for travelers in Spanish-speaking countries. It’s supported by advertisements, and there’s a Premium account option as well, although the pricing model and features are different between iOS and Android.

On Android, you’ll just pay a few dollars a year to remove the ads if you want to support the developers. You’ll pay a lot more if you have an iOS device, but there, the Premium version also includes offline quizzes, cheat sheets, and phrasebooks. There’s a free 7-day free trial on iOS so you can see if it’s worth the money before you commit.

If you’re traveling to Arabic-speaking countries, it’s worth downloading Arabic Dictionary and Translator. Created by EVOLLY, the different parts of the app work in tandem to provide a range of language tools, including translation between English and Arabic.

The translation side of things brings together sources including Google, Microsoft, Yandex Translate, Baidu Translate, and others, and lets users review different suggestions for how to say a given phrase.

Arabic Dictionary, meanwhile, lets you look up particular words and save them for quick access, create flashcards, and make notes related to your study of the language. There are tons of glossaries and supplemental dictionaries to choose from, including those for specialized topics.

The app also gives details of synonyms, antonyms, and other related words. There are in-app ads, which can be removed if you go Premium.

Pleco is a language app for both Mandarin and Cantonese. While not technically a translation tool (it’s more like a dictionary), Pleco it’s still a compelling language tool for travelers.

You can use the optical camera recognition (OCR) feature to look up signs, menus, and other text via your phone camera, or write characters out on the screen. Helpfully, the app is tolerant of stroke mistakes: think of it as autocorrect for Chinese characters.

The dictionary pulls information from Oxford, Longman, and other publishers, and provides definitions and sample sentences with audio to check pronunciation. You can also convert words from the dictionary into flashcards, and install pre-made flashcards to improve your language skills.

For pronunciation help, the app features audio recordings of 34,000 Chinese words spoken by two different native Mandarin speakers. A speech synthesizer is available for Cantonese. You can purchase various add-ons or packages, as well, which add things like special dictionaries, document readers, and stroke order diagrams.

Papago is a useful tool for Asian languages, especially Korean, letting you translate words and phrases from text, audio, or images. The Korean translator allows users to toggle on/off the setting for “honorifics,” an important aspect of Korean grammar.

The app is accurate enough for everything from basic conversations to translating K-pop songs, and you can even use it to translate entire web pages simply by pasting in the URL. Papago also includes both a dictionary and a phrasebook, which provides hundreds of helpful recommendations.

Turning to devices, the large, clunky translation gadgets of yesteryear are increasingly being replaced by sleek, easy-to-use tools that make the Babel Fish from The Hitchhiker’s Guide to the Galaxy seem tantalizingly close to reality.

The best example right now is the second version of Google’s Pixel Buds, a sleek pair of fully-wireless earbuds with a killer translation feature. Pop in the buds, say “Hey Google, help me speak Spanish” (or whatever language you like), and your phone will open up Google Translate with the appropriate language pair.

Now, whenever you tap and hold an earbud and say something, it’ll come out of your phone speaker in the other language in near real-time. Press and hold the equivalent button in the phone app when the other person speaks, and their words will be translated back in your ear when they’re done.

Don’t expect to be having in-depth philosophical debates using this approach, since it’s still subject to underlying limitations of Google Translate. For simple phrases and conversations, though, it’s surprisingly fast and accurate, and much easier than passing your phone backward and forward every time you speak.

Note, though, that the Buds work best with Android devices, and that’s particularly true with the translation feature. If your connected phone or tablet isn’t running Android 6 or higher, no dice.

Another in-ear device, the WT2 Plus Language Translator earbuds don’t look as stylish as the Pixel Buds, but come with dedicated translation features that you won’t find on Google’s more general-purpose version.

The device offers three different modes for translating a conversation: simul, touch, and speaker. The first two approaches see each person wearing one of the earbuds, which either automatically translates everything in both directions (simul mode, for quiet environments), or needs a tap to switch modes (touch mode, for noisier places.)

The speaker mode works much the same as with the Pixel Buds: one person speaks and listens via the earbuds, the other hears the translation via the smartphone app and presses a button to reply. Regardless of the mode you’re using, though, the WT2 Plus still relies on your phone and its internet connection to do the heavy lifting.

Handling 40 languages and 93 accents while online, the device can also translate from Chinese to six other languages including English, Spanish, and Japanese while offline. Dual noise-canceling microphones help cut out background noise and increase translation accuracy, which can be as high as 95% under ideal conditions.

Companion apps are available for both iOS and Android, and work the same way in either case.

Images via rawpixel on Pixabay (girls on phone), 905513 (“Hello” in languages of the world), terimakasih0 (close-up of people with phones), and Clem Onojeghuo (backpacker at train station), Amazon (WT2 Plus Language Translator) 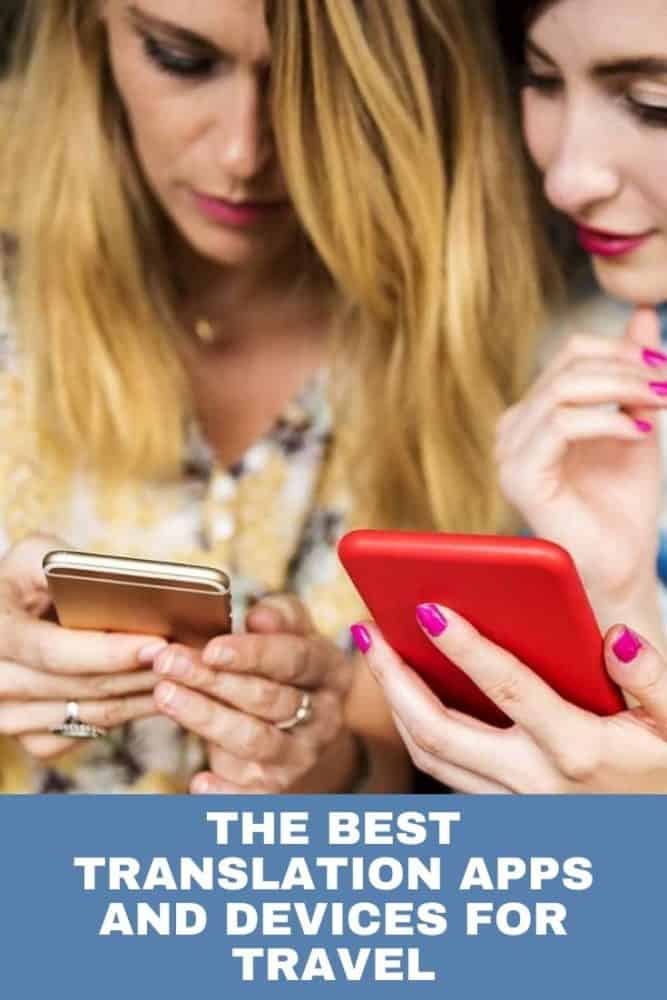