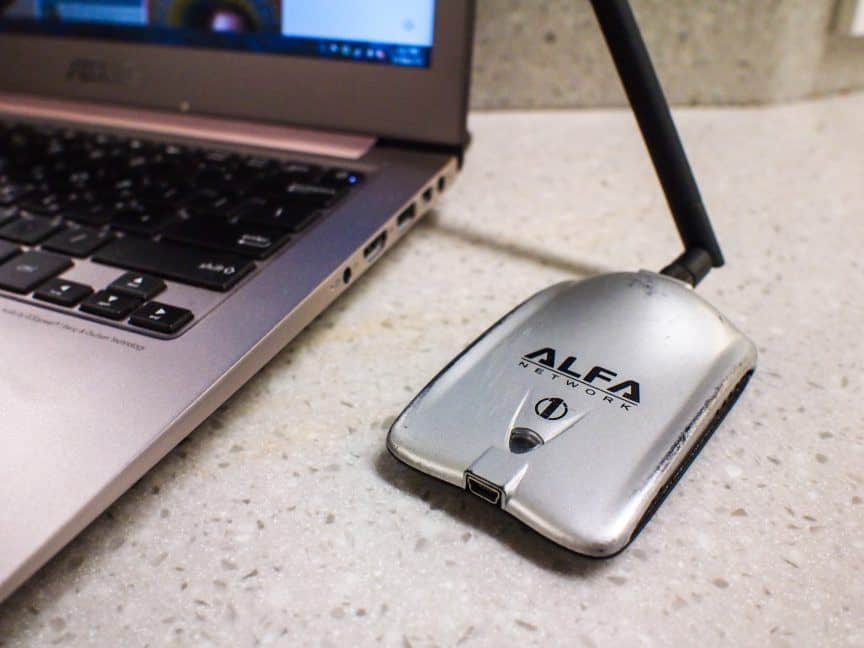 2019 update: The Alfa AWUS036H has (finally) been discontinued, and is no longer available to buy. The device itself, though? It’s still going strong.

The closest equivalent is the AWUS036NHA, although many similar models from other manufacturers are also available.

When you travel all the time, your expectations for what constitutes ‘decent internet’ tend to nosedive. When I had a home, fast downloads, reliable connections, and crystal-clear video calling were the bare minimum. Now, getting more than two bars of signal and being able to load Gmail in under a minute counts as a successful day.

I have a special knack of ending up in hotel rooms that are just far enough from the wireless router to ensure a shitty connection. Sometimes I can manage a room change, usually I can’t (probably because I’m paying the cheapest rate because, well, I’m cheap).

Even a few Airbnb places have had similar problems — the cottage I’m in right now in the English countryside gets its connection from the main house twenty metres away, which means two options.

I can stand outside in the driveway, precariously balancing my laptop in one hand and slowly typing this article with the other, or plug in a cheap plastic gadget and eliminate the problem entirely.

I’m going with option B.

My Alfa AWUS036H (catchy name, right?) really doesn’t look like much. Even when it was new, it wasn’t going to win any awards for great design.

A smallish silver plastic case, single flashing light that tells you very little, ugly black screw-on aerial. After two years of being bashed around in my backpack, it’s now scuffed, scratched and generally beaten up.

Given I paid under thirty bucks for it in the first place, it shouldn’t really be working at all after abuse like that — yet somehow it still is.

I’ve lost count of the number of times I’ve turned an unusable Wi-Fi connection into one that’s strong and solid, one or two bars of flaky signal into four or five. I’ve connected to networks down the hall and down the road, including many I didn’t even know existed before plugging it in.

It worked like a charm on my old laptops running Windows 7 and 8, and hasn’t missed a beat on my new one running Windows 10 either — it was detected automatically and just started working.

If you’ve got a Mac, though, you’re out of luck. The drivers haven’t been updated for recent versions of the operating system, and it didn’t work on last year’s Macbook Pro model when I tested it.

After plugging it into any old USB socket, the light on the Alfa flashes for a few seconds to let me know it’s alive. Soon after, a second wireless network card shows up in the Network and Sharing list (I’ve renamed it to the dull-yet-accurate ‘External WiFi’, but you can call it whatever you like if it helps you distinguish it from the inbuilt one).

Still, it’s typically not too hard to figure out which one is which — see the connection that has a whole bunch of extra networks available, with much stronger signal? Yeah, that’ll be it.

One thing I have noticed is the card is a bit picky about the mini-USB cable that you plug into it. As long as you connect the one it came with, or an equally high-quality one, it’ll be fine — but I recently happened to use a different one I had lying around and it totally refused to work. No lights, no network, nothing.

After five minutes of assuming the card had finally died, I dug out a different, thicker cable as a last-ditch effort and everything sprang back into life.

A better connection for my laptop is great, of course, but by itself the Alfa doesn’t help get my other devices connected — I can’t plug it into a tablet or phone. For that, I combine the range extender with a piece of software called Connectify Hotspot (again, Windows-only).

It lets me turn any wired or Wi-Fi connection into a hotspot for other devices to connect to. Even with half a dozen devices using the hotspot, as has been happening the last few days, it rarely misses a beat.

The paid versions offer more options, but even the free one will get the job done. For extra geek credibility you can even share your VPN connection, using three different bits of technology to turn an unusable, insecure network into a reliable, secure way to get online with all your devices.

There are very few gadgets that I recommend as ‘must-have’ for travellers. If you’re using a Windows laptop, however, and work from the road or otherwise need to be connected on the move, this cheap plastic range extender makes the list.

It’s one of those rare devices that just does exactly what it’s supposed to, reliably and well, for very little money. These days, I wouldn’t travel without it.