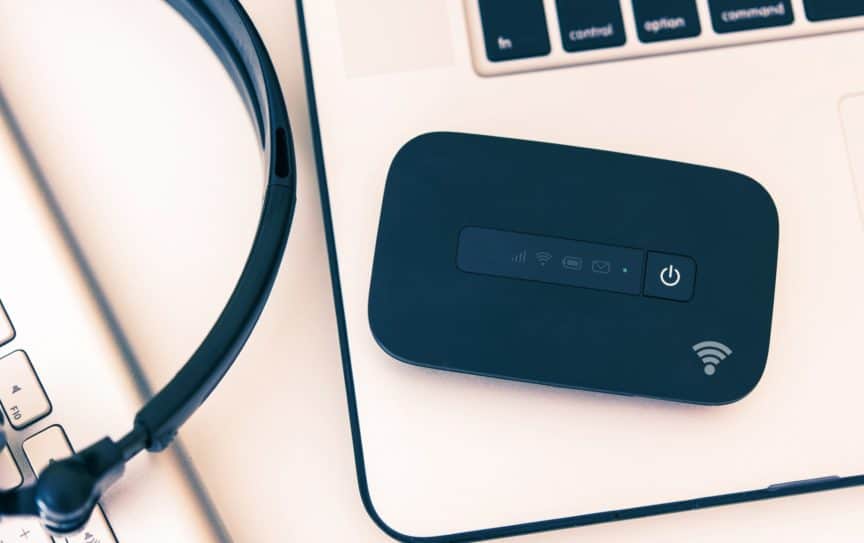 Public Wi-Fi isn’t great for staying connected on the road. Weak signal, slow speeds, and dire hotel networks often make getting online an ordeal, and that’s before you even consider the lack of security.

If you need reliable, consistent internet while traveling, especially if you’ve got a locked smartphone or are traveling as a couple or group, take your connection wherever you go with a mobile hotspot instead.

What Is Mi-Fi, Anyway?

Mobile hotspots are known by a range of other names, including portable Wi-Fi routers, pocket Wi-Fi, mobile Wi-Fi devices, portable hotspots, Mi-Fis, and more. Whatever you call them, though, they all work in much the same way.

Typically a small gadget around the size of a deck of cards, the device shares cellular data over its own private wireless network. You get online by connecting all your other devices to that private Wi-Fi network.

Many companies rent or sell prepaid hotspot devices like these for international travel, where you buy a certain amount of data or time in advance. They’re convenient, but while typically cheaper than roaming, the cost can still mount up on longer trips.

Just like smartphones, though, you can also buy unlocked versions that let you pop in a local SIM card to take advantage of cheap data rates anywhere in the world. You’ll pay less (often, a lot less) per day with one of these, in exchange for having to seek out a prepaid SIM when you arrive in a country.

These are the best mobile hotspots unlocked for travel in 2022.

Note: We recommend carefully checking the regions supported by the specific mobile hotspot model you plan to purchase. Just like smartphones, not every device supports the different cellular frequencies used in each country. This can mean you get slower speeds, or no data at all, in some parts of the world.

Many, if not most, global mobile hotspots work surprisingly poorly in the United States. There are several reasons for this, but it’s a real problem for travelers visiting the United States or locals looking for a flexible hotspot that isn’t locked to a particular cell company.

Netgear’s Nighthawk M1 is one of the few models that offers good LTE coverage in the US and most other countries, with blistering top speeds and a range of extra features that provide real value when you’re on the move.

The M1 is relatively large as far as mobile hotspots go, but while it’s not really something you’d carry around in your pocket, it’s still small and light enough to easily fit in a purse/handbag or day pack.

That extra size and weight brings a number of benefits. The first is length of time away from a power socket, with Netgear promising up to 11 hours of usage from the 5000mAh battery. There’s also a spare available for purchase if you need even longer between charges.

The M1 supports sharing its data over either a 2.4 or 5Ghz Wi-Fi network, helping you avoid congested airwaves in crowded cities. You can also use it as a media server, streaming shows over Wi-Fi from a USB stick, hard drive, or microSD card. A USB socket lets you top up your phone from the hotspot’s battery if needed.

When it comes to download speed, the Nighthawk M1 is almost unparalleled in portable hotspots. Support for a range of confusing networking acronyms including LTE Cat16 and 4×4 MIMO translates to downloads at up to 1Gbps, and uploads of 150Mbps.

You’re unlikely to ever see those speeds in the real world due to limited carrier support and general network congestion, but even so, until 5G coverage is widespread and affordable, this is as good as it gets right now.

The M1 handles up to 20 devices being connected at once, so you’ll have no problems sharing those faster speeds with a group of people even if you’ve all got multiple devices.

In short, this is a high-quality device that promises widespread global coverage, fast speeds, good battery life, and useful extras, at a size and weight that’s still appropriate for all kinds of travel. As a result, it’s our top unlocked portable hotspot pick for 2022.

Note that Netgear has recently released the Nighthawk M5, the 5G version of this hotspot. Speeds are very impressive if you happen to be in a 5G coverage area, but the device is also noticeably more expensive. Grab the M5 if you know you need those super-fast speeds and will be somewhere you can get them, but otherwise, the M1 makes more sense for most people right now.

The GlocalMe G4 Pro is one of the best mobile hotspots we’ve come across, with a killer feature. The device lets you use either the inbuilt data plans for convenience or a local SIM to slash costs, whichever you prefer.

We’ve published a full review of the predecessor G3 in the past. Despite a couple of minor niggles, we found it to be the best mobile Wi-Fi hotspot for international travel overall, especially if you’re regularly on the road.

The latest model is basically a slimmer, lighter version with all the same features. It uses 4G/LTE networks by default, dropping back to 3G or 2G when necessary. You’ll get good speeds as a result, up to 150Mbps download and 50Mbps upload over LTE.

With the maximum five devices connected at once, web browsing, maps, and even streaming video should still work well. The device ships with just over 1GB of global data included, which you can use via the internal “cloud SIM” in any of 100+ supported countries.

Once it’s finished, you can buy local or regional packages as needed, often at a surprisingly reasonable rate. “Unlimited” data plans are capped at 2GB, however, after which speeds drop significantly.

You can put local prepaid SIM cards in either or both of the unlocked nano slots, and switch between them and the cloud SIM at any time. The device has a simple touchscreen interface, and it doesn’t take long to get used to how it works.

Battery life is good, at up to 12 hours of continuous use. You can even use the G4 to charge up your other devices via the USB C port, which is a nice touch.

The Huawei E5577 removes most of the limitations of the cheap and nasty hotspots out there, while still staying affordable. For your extra cash, you’ll get 4G/LTE support in most of the world and at least 3G in the Americas. This makes it a solid international pocket Wi-Fi choice for global travelers on a budget.

Good top speeds let you connect several phones or tablets to the E5577 without major slowdowns, at least in areas with 4G/LTE service. The interface isn’t as slick as the touchscreen-based version on more expensive models, but other than when installing a new SIM card, you’ll barely need to use it.

The hotspot is slim and lightweight enough to drop in your pocket, but that lack of bulk comes at a price: lack of space for a big battery. Expect no more than six hours of continuous use out of it, and potentially less if you have several devices connected or are in a low-signal area.

Overall, the E5577 makes a lot of sense for travelers who want a simple, easy-to-use Mi-Fi device that works in most of the world and doesn’t cost a fortune. We’d like the battery life to be better, but that’s the only real concern, and is easy enough to get around with a portable charger if needed.

Best for Fast Downloads on a Budget: Huawei E5787

The best feature of Huawei's E5787 is its speed. LTE Cat6 support provides download speeds of up to 300Mbps, making this one of the fastest mobile hotspots you can buy without spending a fortune. You can also connect up to 10 devices at once, so everyone can take advantage of that extra bandwidth.

The sleek design allows the E5787 to fit easily in a pocket. A slick touchscreen interface makes it easy to see important information at a glance and change more advanced settings as needed.

You’ll get 4G/LTE coverage in many parts of the world (but not necessarily the Americas), dropping back to 2G or 3G service elsewhere. If you’re in an urban area with crowded airwaves, you’ll appreciate being able to switch the hotspot’s Wi-Fi network between 2.4Ghz and 5Ghz for a better connection.

Despite the small dimensions and extra power requirements of that high-speed data, you’ll still get up to 10 hours of battery life. In a pinch, you can even charge your phone or other USB devices from the hotspot if you need to.

As good as the device is, however, it’s worth noting that recent price drops on the Huawei E5885 (below) often see it selling for a similar price. If you don’t mind the extra weight, the premium features and longer battery life may make it a better option.

Many Mi-Fi devices, especially the lower-cost models, have small batteries that go flat after a few hours of consistent use. You’ll have no such problem with the Huawei E5885, which should last an entire day or more and has several other premium features to justify its higher price.

Like the E5787 (above), this is one of the faster mobile hotspots you can buy. LTE Cat6 support ensures downloads of up to 300Mbps in much of the world, and 3G/HSPA+ coverage elsewhere. You can also connect up to 32 devices at once, so if you feel like providing Internet service for your entire tour group, it’s totally possible.

The hotspot’s extra features may mean you can leave some of your other travel gadgets at home. Rather than toting a portable charger, for instance, you can use some of the 25-hour battery life to power other devices via the USB port. Helpfully, the small hand strap doubles as micro-USB cable.

The E5885 also removes the need for a dedicated Wi-Fi range extender since it can also act as a travel router, taking an existing wired or wireless connection and sharing it over Wi-Fi. Both 2.4Ghz and 5Ghz are supported, which helps improve the signal in urban areas with congested airwaves.

It’s more durable than most other portable hotspots, with a faux-leather cover that provides some resistance to spills and stains. All of the ports are also protected by a rubber cover, helping keep liquid and dust out when they’re not being used.

This is a high-end device, with a price tag to match. Given the premium features and the ability to leave other gadgets at home because of it, however, the E5885 still provides good value for money for many travelers. 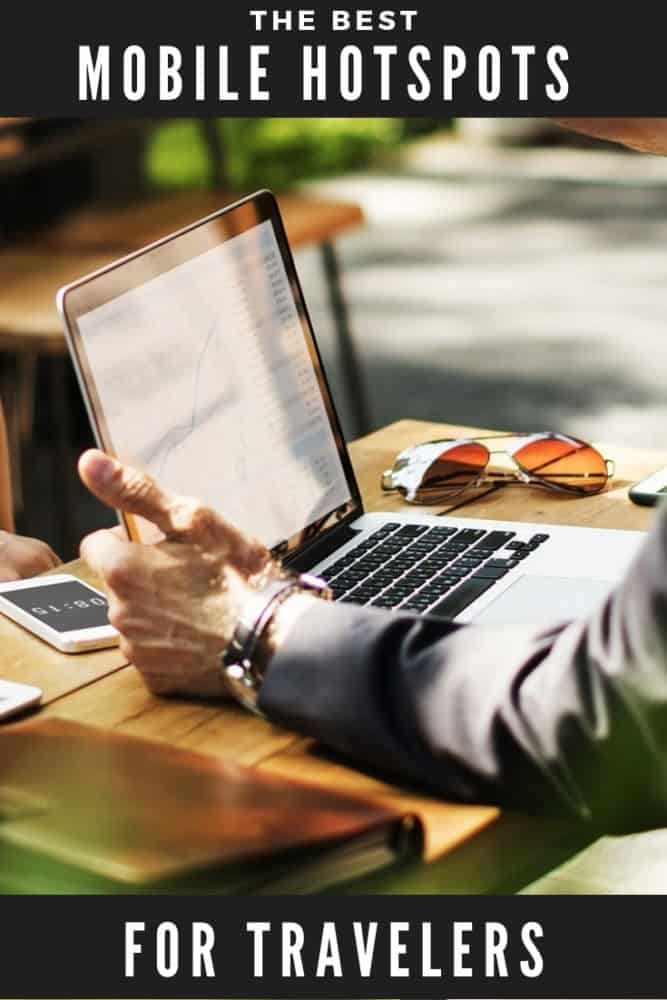