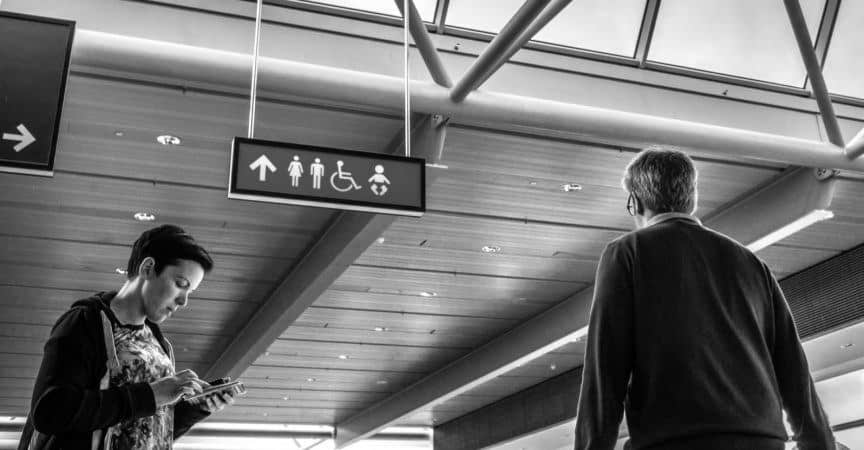 It doesn’t seem like it should be hard to get your mobile phone ready for travel. Throw the charger in your bag, stuff the phone in your pocket, and you’re good to go, right?

If only that was true.

While that approach might work when you’re traveling domestically, there are several ways using your phone overseas can go wrong. From charging problems to incompatible frequencies, locked devices to roaming costs, international travel throws up a number of problems for smartphone owners.

Below, we outline the issues you’re likely to face when using your phone overseas, and more importantly, what you can do to solve them.

So you have your fancy smartphone, but how are you going to charge it?

If you usually charge it from a wall socket, does your destination take the same type of plug? If so, you should be fine. Just double-check the voltage requirements (written in tiny letters somewhere on the charger) to make sure they match the power in your destination.

If not, you’ve got a decision to make. You can buy a travel plug adapter that covers your destination, then plug your usual charger into it as needed. It adds a bit to the bulk and weight, but on the upside, you can use the same plug adapter for any of your other electronics as well.

If you’ve got other USB-powered devices to charge, though, we’d suggest buying either a universal travel adapter with a bunch of USB sockets, or a dedicated USB wall charger like this one that comes with several sockets and a bunch of different clip-on plugs.

Either way, you’ll end up with something that works in most countries around the world and lets you easily power several portable gadgets at the same time.

Speaking of power, you’ll thank yourself for packing a power bank. They don’t cost much, and even the smaller ones can recharge your phone at least a couple of times. When you’re searching for your hotel in the rain late at night and your phone runs out of juice, remember this moment.

Will your phone even have service where you’re heading?  You may need to see if your usual cell company has a roaming partner in your destination.  Check for a map or a list of countries on your provider’s website to make sure you’ll have coverage where you need it.

The next (big) issue is roaming charges. These are often atrocious, and seeing the bill for the extra charges when you arrive home could easily ruin your trip.

That said, a few companies have seen the light (or had their hands forced by regulators) and offer cheap or free roaming to their customers. T-Mobile in the US leads the way, with free (slow) data roaming in 200+ countries on some of its plans.

Google’s Fi data service is a flat $10 per gigabyte in 200+countries, while companies in EU countries are required to offer “roam like at home” pricing to other EU nations (albeit with some limitations.)

Those are the exceptions rather than the rule, though. Check prices well in advance, and if your provider doesn’t offer a reasonable deal, turn off data roaming or use local SIM cards (as below) while you’re away.

Is Your Phone Compatible?

It’s not so surprising that different cellular technologies are used in different parts of the world. Let’s face it, if we can’t even agree on power sockets, what hope is there for anything else?

While LTE and 5G are used all over the world, the frequencies used to provide them aren’t the same everywhere. Different countries and different providers “talk” to your phone on different frequencies. If your phone doesn’t support those frequencies, it’s going to be awfully quiet waiting for that call from your Mom.

Trying to provide support for every possible frequency drives up the price of a phone, so most manufacturers get around the problem by selling different versions of their phones in different regions.

For several years, it was rare to get 4G/LTE service outside of the region you purchased your phone. That’s changed recently, however, with companies like Apple, OnePlus, and several others including support for a much wider range of LTE frequencies (or “bands”) in their devices.

By contrast, as 4G/LTE and 5G networks have become more common, 2G and 3G networks are starting to be switched off. This frees up radio spectrum for use with the newer technologies, but means you won’t get service with older phones.

Confused yet? I’m not surprised. The best way to find out if your specific phone will work overseas is to visit the appropriately-named Will My Phone Work. Choose your exact model and the country and provider you’d like to use it with, and you’ll get the answer.

If you’re not sure which local provider to choose, we’ve got suggestions in 60+ countries. If you’re planning to use international roaming rather than buy a local SIM card, check with your home cell company who its roaming partner(s) are in the country you’re visiting.

If you’re going away for longer than a couple of weeks, unlocking your phone can save you big money while you are away.

With an unlocked phone, you’re not tied to your cell company from back home. Instead, when you touch down in Thailand, New Zealand or wherever, you pick up a new SIM card from a local carrier. Now you can enjoy local calling, text, and data rates for a fraction of what it would cost to roam with your usual carrier.

Much of the world works mainly on the Pay-as-You-Go model, so you don’t need to sign up for monthly plans or lengthy contracts. Instead, you just buy a package for a few days or weeks, then discard the SIM card once you leave the country.

For those with recent iPhones, or various models of Android phone from Samsung, Google, and others, it’s also worth considering eSIMs. These let you get service without having to track down, buy, or install a physical SIM card, and we’ve written a lot more about them here.

If you bought your phone for a discounted price by signing up on a contract with your cell provider, though, there’s a chance it’s locked to that carrier. It could also be locked even if you paid full price, although that’s less likely. Either way, you’ll need to get it unlocked to be able to use a SIM card from another company.

How do you unlock your phone?  That’s where things get interesting.

The first thing to try is to contact your carrier to see if they’ll do it for you.  They may do it for free, or charge a fee… or they may not do it at all. The longer you’ve had your phone, the more likely they are to do it, but each company is different.

Take a look at this page for the policies in a few different countries. Even if you’re not officially eligible, though, you should always ask.

If your carrier won’t unlock your phone, you can try to find the appropriate unlocking code yourself. Companies like Unlock Base sell these codes for a few dollars. They won’t necessarily work for every device, but the company promises to return your money if there’s a problem.

If it’s all sounding a bit complicated, take it to a specialty phone shop that might be able to help out. You’ll find them in most towns and cities, and pretty much on every street corner in some developing countries. There’s no harm in asking, at least.

Now that you and your phone are venturing out into the real world, you’ll need to protect your Instagram-updating baby from everything travel might throw at it.

We like understated designs that don’t scream “COME STEAL MY FANCY PHONE,” but everyone is different. We covered several of the toughest case options for iPhone here, and a quick search on Amazon will turn up many more for other devices.

What If You Can’t Get It Working?

If your phone isn’t going to be usable overseas — maybe you can’t get it unlocked, maybe it just won’t work in the country you’re going to — you’ve got several other options.

Only use Wi-Fi networks: even if your phone is in flight mode, you can still use wireless networks anywhere you can find them. You won’t get hit with roaming charges, and can still make phone calls with tools like Skype or Google Voice, and send and receive messages via WhatsApp, iMessage, or many other apps.

Many travel apps work fully or partially offline (here are 25 of them to get you started), so your phone is still useful while out and about. Just remember to use a VPN to keep yourself safe on public networks.

Use your tablet instead: if your tablet has cellular capabilities, use that instead. The SIM card slot will almost be certainly unlocked: it’s very rare to find any tablets that don’t have unlocked SIM card slots, including iPads. Just buy a local SIM (or eSIM, if it’s supported) in your destination and drop it in.

Again, Skype, WhatsApp, and similar apps can replace calling and texting, and you can turn the tablet into a personal hotspot to share the connection with other devices.

Buy a cheap unlocked smartphone: there are a few good budget smartphone options out there, and it’s possible to get something decent for around $250. Motorola’s Moto G range has been a firm favorite of ours for years and comes unlocked for use with local SIM cards.

Buy a wireless hotspot: hundreds of companies sell wireless hotspots, which let you share a single mobile connection among several other gadgets. Some are aimed at a single or small number of countries, while others work all over the world.

Some let you buy prepaid service by the day or for a certain amount of data, while others are unlocked so that just like a phone or tablet, you buy a local SIM card and drop it in. The better option depends on how often you travel and how long your trips are.

There’s no doubt getting your phone working overseas can be frustrating. It’s worth spending the time to research and check your options upfront, though, to work out what’s best for your particular situation. It could easily save you hundreds of dollars, and plenty of frustration, on your next trip.

For even more on the best way to use your phone on an international trip, check out our guide to using your smartphone overseas. 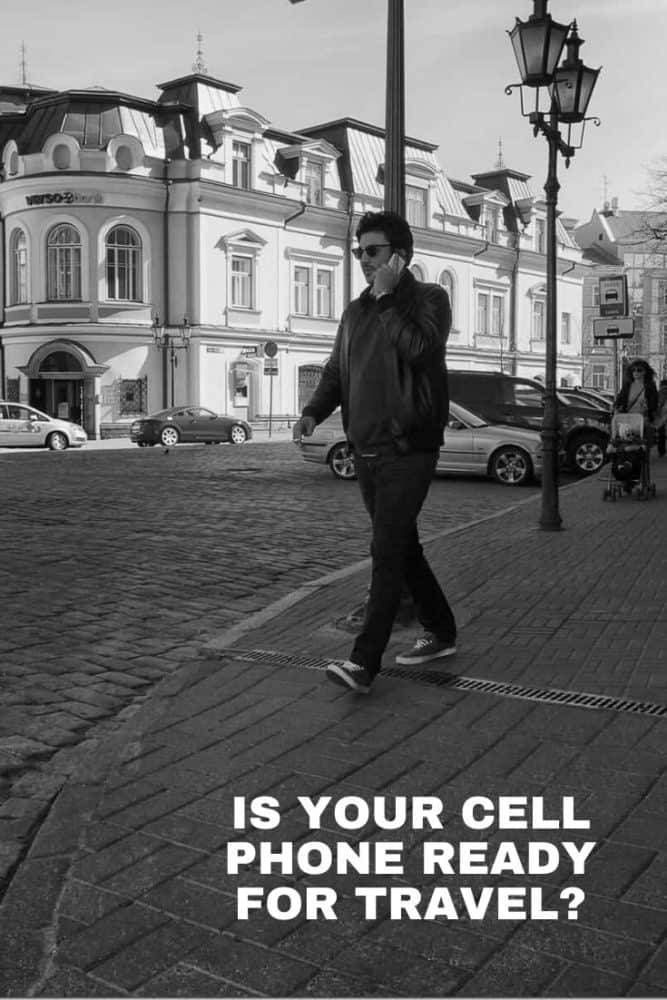