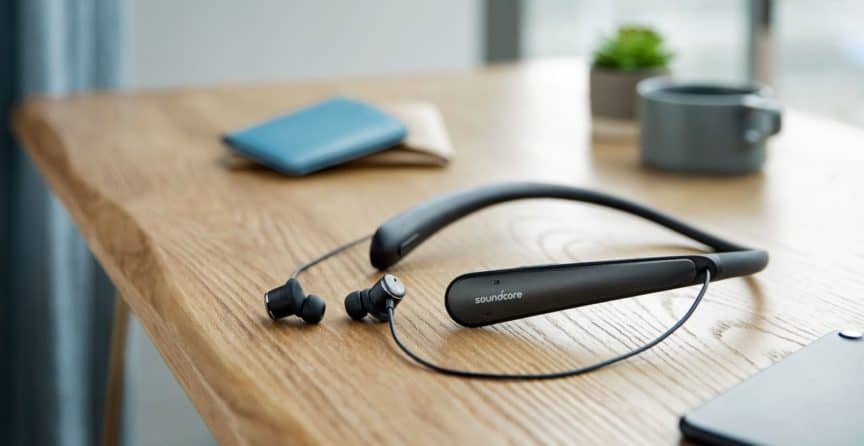 When it comes to portability, there’s no doubt about it: earbuds are great for travel. You can easily throw them into a daypack, take them on the plane, or store them in your pocket while on the move.

They’re not without their issues, though. To start with, the small size of the speakers means music often sounds pretty lackluster. Having microphones attached to a flexible cable means audio quality often isn’t great for the person you’re calling either, and extras like noise cancellation often aren’t included or don’t work particularly well.

For wireless earbuds, that small size also typically means another compromise: poor battery life. You can go for wired models, of course, but they come with their own set of frustrations, especially now that most phones have ditched the headphone jack.

Accessory manufacturer Anker is most well-known for its reliable, inexpensive batteries and cables, but it’s been branching out into sound equipment in recent years.

A recent addition to the range is the Soundcore Life NC, unusual neckband-style earbuds that attempt to address several of the above concerns. With inbuilt noise cancellation, up to 15 hours of battery life, and four microphones for better call quality, they promise a lot for the money.

How well do they achieve those promises? I’ve been testing a set out for the last couple of weeks, so let’s take a look!

First, let’s talk about the elephant in the room: the design. The Soundcore Life NC is essentially a set of earbuds attached to a band that loops around the back of your neck.

On the neckband, controls are shared between four physical buttons. They’ll let you adjust the volume, take calls, listen to music, skip tracks, manage the bass, access noise cancellation, and more. There’s also a micro-USB input, used to charge the earphones and listen in wired mode via an adapter cable.

The Life NC ships with four different sizes of silicone tips, from extra-small to large. My ears are on the smaller side, and after a bit of experimentation, I had no problems getting the earbuds to fit.

Both the earbuds and neckband feel very smooth on the skin, and even though it contains the battery, the band remains lightweight and flexible. Speaking of the battery, it’s rated at up to ten hours with noise-cancellation turned on, and 15 hours otherwise.

As usual, you’ll get less than that in the real world, but with the Life NC averaging around eight hours of use (with noise cancellation), it’s not that much less. You’ll still get most or all of the way through a long-haul flight or overnight bus ride before needing to charge things up again.

The headphones have basic IPX5 “sweat resistance.” This means they should handle a light shower or a bit of perspiration, but don’t expect to drop them in the toilet and get away with it.

The set comes with a couple of useful travel-specific features. As mentioned earlier, a bundled micro USB-to-3.5mm adapter cable lets you turn off Bluetooth (on planes, for instance, or just to save battery), and listen via a wired connection instead.

There’s also a soft travel pouch in the box, which provides at least a small amount of protection from the rigors of the road.

The accompanying iOS and Android app isn’t essential but does add a few useful options. You can choose between three equalizer modes (“original,” “bass boost,” and “office”) and set the maximum volume level.

If you don’t like the default button setup (ie, which buttons control which functions,) the app also lets you swap to an alternate one.

Connecting the Soundcore Life NC to my Samsung Galaxy phone over Bluetooth was straightforward and intuitive.

My initial tests involved listening to several of my favorite tracks, and I was surprised by the sound quality. The audio was richer, with much more clarity and depth, than many other standard earbuds I’ve used.

It was an immersive audio experience, and the earbuds passively blocked low-level background noise. Maximum volume was plenty high enough: not earth-shatteringly loud, but more than enough for people who don’t want to damage their hearing. If you love your bass, the “BassUp Mode” noticeably boosts the low end.

One of the big selling points is the “Active Noise Cancellation” (ANC) mode, so I gave it a good workout. I started by listening to music with earbuds in (but no ANC) while an obnoxiously loud TV program played in the background.

The TV noise was still very noticeable, distracting significantly from the music playing in the earbuds. When I turned on the ANC mode, I could still hear the TV, but now only as a soft murmur. Turning up the volume of the music made the outside noise practically disappear.

I also got to do an unexpected weather-related test. A storm rolled in on the day I was testing, with thunder and lightning right outside my window. With noise-cancellation turned on, I didn’t hear a sound.

Overall, while it doesn’t block out noise completely, the noise cancellation does a decent job. You’ll still need to turn up the volume of whatever you’re playing to drown out the world completely, but not as high as you otherwise would.

While it’s no match for high-end noise-cancelling headphones, those are also much larger and typically cost north of $300. For the money and size, the Life NC performs pretty well.

Next, I checked out the calling situation. This is one aspect that’s often forgotten when evaluating headphones, but since Anker strongly pitches the Life NC towards business customers, it’s particularly important here.

With that market in mind, the earbuds have several useful calling features. Without touching your phone, you can answer, reject, or end calls, switch between held and active conversations, and get a vibrating alert of incoming calls.

For a business traveler, these features can certainly make life easier, especially when you’re taking calls on the move. Note, however, there’s no mute button. That’s an odd omission, given the target audience.

The quality of incoming audio was impressive during my test calls, with clear sound and more texture to the voice than many standard phone speakers.

Much is made of the four echo-cancelling microphones, which aim to identify and remove background noise from your conversations. Even so, my experience wasn’t anything to get excited about. The person on the other end reported that overall, my voice sounded clearer when using the inbuilt phone microphone than the Life NC.

Due to the good incoming sound quality and useful feature set, though, I’d still the rank Soundcore Life NC as a strong tool for calls. Just be aware that it does a better job of receiving voices than transmitting them.

Yes, But What About That Neckband?

So, that neckband. Here’s the thing: I’m just not into it. I know this is completely subjective, and I’m sure some people love it.

On the upside, it’s smooth on the skin, and kinda looks like a futuristic accessory. Also, there are some major advantages to neckbands over other types of wireless earbuds. The extra physical size means more room for the battery, controls, and noise-cancellation circuitry.

From a purely aesthetic standpoint, though, I find neckbands clunky, awkward, and not particularly comfortable, and the Life NC is no exception. I want wireless earbuds so I can listen to music or take calls on the move without dealing with cables and attachments.

The neckband also bounced around on my neck quite noticeably during high-intensity activities like running or cardio workouts, to the point where it became distracting. Again, that detracted from the whole “wireless” feeling.

For me, at least, the neckband kinda defeats some of the purpose of wireless earbuds. You may or may not feel the same.

While I have some complaints, I still think that Soundcore Life NC offers great value for many travelers.

Sound quality was better than expected, and while the noise cancellation doesn’t match that from high-end headphones, it’s perfectly fine for the money. Battery life is good for wireless earbuds, and there are useful extras for travelers.

Business users will particularly appreciate the range of on-device call management options, although the lack of a mute button really does feel like an oversight.

While it’s not ideal for high-impact activities, the earbuds are well suited to lower-intensity tasks like walking around a city, working from a cafe, and listening to music on the go.

Overall, if you’re open to the unusual style, the Life NC may well be a good travel earbuds option for you. 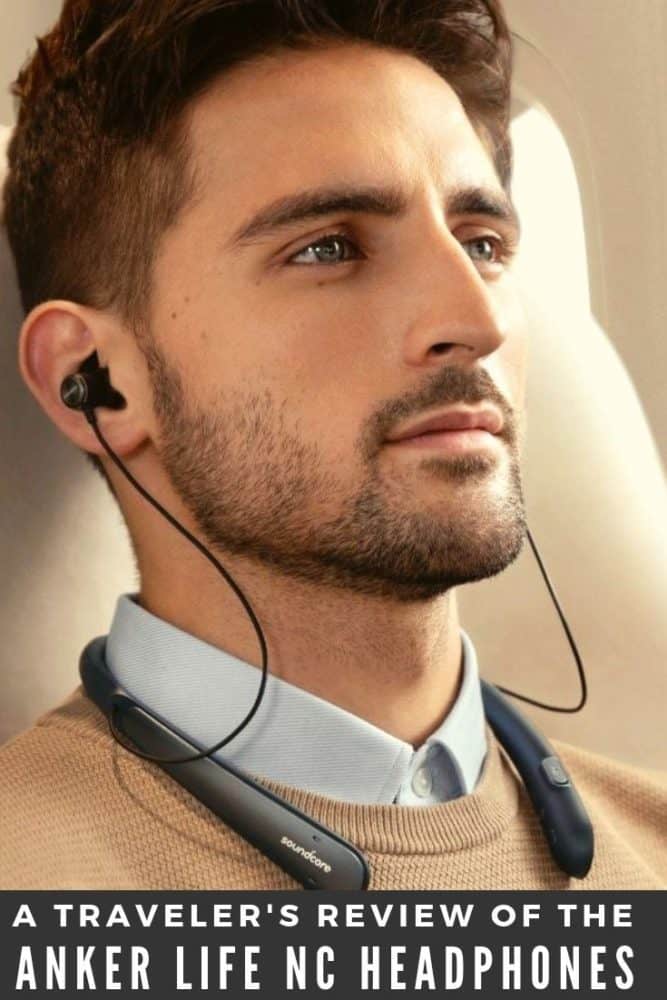