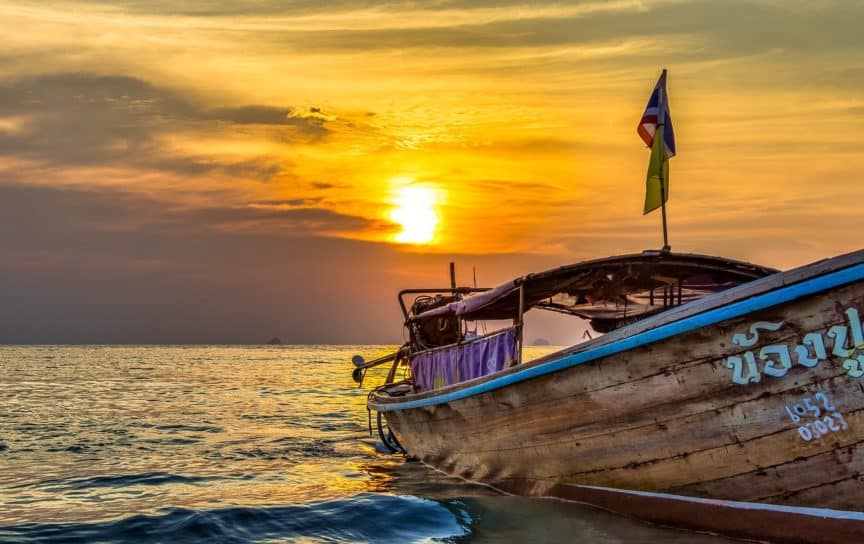 Need to make a few calls or update your Instagram on the move in Southeast Asia, but don’t want to pay those ridiculous international roaming rates?

Good news if you have an unlocked phone: in much of the region, local SIM cards are cheap and easy to find.

Data speeds are variable but often much better than you’d expect, especially in major towns and cities. Local calls and texts are usually very cheap.

Here we’ll cover the basics, based on real-world experience throughout the region. In each case, we recommend a major mobile carrier that we (or others who spend plenty of time in the country) use and recommend.

Table of Contents show
Got travel insurance for your Southeast Asia trip yet? A good policy can cover you for all kinds of sticky situations, from medical emergencies to canceled flights, theft, lost luggage, and more. We've been using World Nomads for over a decade.

Many different call and data packages are available, depending mainly on how long you’re in the country, how much data you need, and where you’re purchasing.

As an example, a Happy SIM at Bangkok airport with 30GB of LTE data valid for a month cost 599 baht including tax (~$17).

It’s possible to buy tourist SIM packages at international airports, but you’ll pay a premium to do it.

You’ll get better deals if you wait until you get into town. Just head to the nearest AIS or Happy retail store, and pick one that works for you. Many convenience stores can also sell and register a SIM to you.

Thailand introduced stricter regulations for SIM card purchases in 2017. You’ll now need your passport, plus have your photo taken, to get the card registered and activated.

The easiest option by far is to go to a convenience or mobile phone store showing the AIS or dtac logo. Once there, you can top up via a printed voucher or scratch card.

3G/HSPA+ service is pretty fast, and you’ll find it in most cities and reasonable-sized towns. LTE is available in most of the country, and 5G rollout has started in major cities.

For more details, read our full guide to buying a SIM card in Thailand.

The SIM card costs a dollar, while $5 gets you 30GB of data valid for a month.

When arriving at Phnom Penh airport pre-pandemic, a Cellcard booth was on your right as you left baggage reclaim. The person working there on the day I turned up spoke excellent English, and set everything up for me in a few minutes at no extra charge.

That booth was no longer there in February 2022, but I can’t confirm whether it’s returned now that Covid regulations have eased in the country.

If you are arriving elsewhere, Cellcard signs are everywhere, even in smaller towns. I purchased a card from official stores in Kampot and Phnom Penh, and it was a quick, simple affair in both cases. Your passport will be required.

Just find a shop displaying a Cellcard sign in the window.

Fast 3G/HSPA+ was common in towns of any size, with slow EDGE service available most (but not all) other places. LTE is available in most of the country.

For more details, read our full guide to buying a SIM card in Cambodia.

There are many other call and data packages available, however. Just grab a brochure from any official Unitel store (in most medium-sized towns) for the details.

Just look for the Unitel signs in a shop window and ask for a SIM card. You may not need to provide a passport.

As with buying the SIM card, refills are available at any store showing a Unitel sign.  Just buy a top-up card, scratch off the silver coating, and follow the (English) instructions.

LTE rollout so far is limited, but 3G/HSPA+ is available in most major towns and some smaller ones, with EDGE present almost everywhere else. Speeds are often surprisingly fast.

You’ll pay around 120,000 dong ($5) for a Viettel SIM card with 3GB of data, valid for a month. If you plan to make domestic calls and texts, just add a bit of extra credit on top.

Surprisingly, the rates at the airport are at least as good and sometimes cheaper than what you’ll find in town, but be careful: the SIM card likely won’t be officially registered to you, which means it can be cut off at any time.

There are several mobile phone stands outside the international arrivals hall at Ho Chi Minh City airport. The staff speak good English and are very efficient.

Outside the airport, you can buy a SIM card on pretty much every corner. You’re more likely to find someone who speaks English in tourist areas, however.

As mentioned above, though, unofficial outlets (including at the airport) probably can’t register the SIM to you, so you risk having it cut off without warning. As a result, we recommend buying your Viettel SIM in an official carrier store. A passport will be required there, but not necessarily elsewhere.

Any mobile phone shop will do, just look for the Viettel signs.

LTE download speeds can approach 50Mbps, and even 3G/HSPA+ is often quite fast in major towns and cities. Slower 2G speeds can be found pretty much everywhere else.

For more details, read our full guide to buying a SIM card in Vietnam.

Of all of the countries in South East Asia, this is the most rapidly-changing for telecommunications (and almost everything else).

Any cellphone shop should be able to help, although English may not always be spoken.  A passport shouldn’t be required.

Data speeds vary widely depending on where in the country you are, and whether you’re inside a building. Oordeoo doesn’t cover the entire country, so don’t expect coverage everywhere you go.

For more details, read our full guide to buying a SIM card in Myanmar.

You can buy a SIM and package almost anywhere you see the Hotlink/Xpax logos. That’s likely to be several times per city block. If the particular store you pick doesn’t sell it, just walk a few metres down the road.

You can also buy at international airports on arrival. Either way, a passport will be required.

You can top up anywhere you see the right logo.

Fast LTE and 3G/HSPA+ data service is available throughout the country, including Malaysian Borneo. You’ll only drop back to EDGE/2G in very remote areas.

For more details, read our full guide to buying a SIM card in Malaysia.

A SIM card with 3GB of data valid for 120 days and free local calls costs $11 SGD. 1GB of that data is for use any time, with the rest valid between midnight and 8am. You’ll also get 5GB of bonus data to use anytime in the first 30 days.

Other packages are also available, including a Singapore tourist SIM with 100GB of data, local calls, and other benefits for $15 SGD (~$11 USD), valid for a week.

Certain packages are available at Changi airport, but otherwise dropping into a 7-11 is probably the easiest option.

If you somehow can’t find one nearby, several other places (including the carrier’s mobile stores) will do it. Unsurprisingly for Singapore, you’ll need your passport.

No passport required, just find anywhere that sells the SIM cards and away you go. Top-up amounts start at $10 SGD.

It’s possible to buy a SIM card for under a dollar and top up with as much credit as you need. As a tourist, however, you’re more likely to be offered a SIM and data pack.

These packs are particularly expensive at international airports, especially Bali. They should be much cheaper when purchased elsewhere, but you’ll have more difficulty with registration at unofficial outlets (more below.)

Even there, though, there are big variations in price. I was quoted three times as much for the same thing in a convenience store as I was in the cellphone store just down the road.

You can buy SIMs most places you see the Telkomsel sign, and no passport is needed to purchase. Registration requirements changed in 2018, however, which limits your options.

SIM registration can be done at some airports, including Bali, but again, you’ll pay more to purchase there.

Just follow the signs. Topping up at a convenience store is even easier than buying the SIM in the first place. You’re less likely to be overcharged when you do it.

3G/HSPA+ and LTE are widely available, falling back to slower speeds in remote spots.

For more details, read our full guide to buying a SIM card in Indonesia.

There are many types of prepaid plans, depending on how you plan to use your phone. Unlimited text, unlimited calls, data plans, and more are all available.

Plans are generally pretty cheap. As an example, a 4GB data pack (plus 1GB/day for Youtube and other services) valid for a month costs 299 pesos (~$6)

Convenience stores like 7-11 or Ministop or authorized retailers should be able to sell you Smart SIM cards.

However, general merchandise stores (Filipino:sari-sari store) might serve you better outside of the major cities. They’re on every street corner, even in small towns and villages.

Asking someone to “top up” your phone might cause some confusion. The local word for prepaid phone credits is “load” and in the Philippines, you “buy load.”

LTE and 3G/HSPA+ are fine in metro Manila and other large cities. Outside that area, it’s hit and miss. In some provinces, data service works pretty well, while elsewhere it’s unbearably slow.

While local SIM cards in Southeast Asia typically don’t include affordable roaming to neighboring countries, that doesn’t mean there aren’t good options available if you’re traveling to several countries in the region.

While it’s generally still cheapest to buy physical SIMs in each country if you’re staying for a while, travelers moving more quickly should consider the following:

So there you have it, the basics of buying a SIM card that works in every country in Southeast Asia. Of course there are other options available beyond the ones we recommend. If you have firsthand experience of them, feel free to share in the comments! 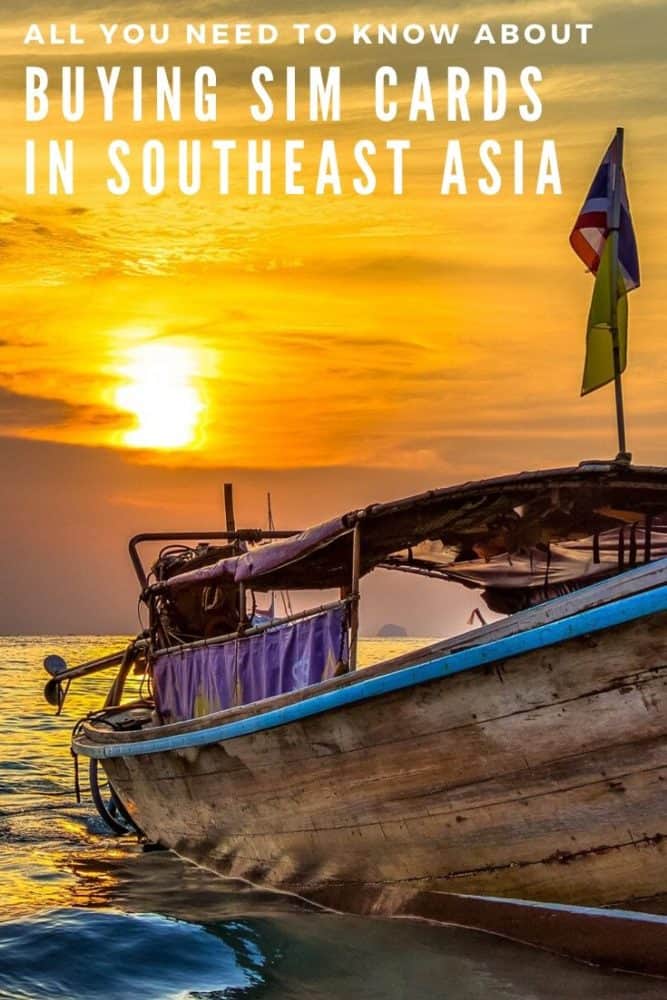