For calls, texts, and data while traveling, we’ve long recommended making sure your phone is ready for your trip and then picking up local SIM cards in each new country.

They’re the best way to stay connected internationally, since you’ll typically get better rates and/or speeds than when you’re roaming, plus a local number for people to call you on.

However, as much as we love local SIMs, they’re not without their problems. They can be time-consuming and difficult to buy due to language and technical issues, and you have to mess around with swapping little pieces of plastic in and out of your phone.

Since you often can’t get them until you’re physically in a country, you can also find yourself disconnected during those vital first few hours after arrival unless there’s a store at the airport or station. For those without dual-SIM phones, they also mean losing access to your usual number while you’re away.

Wouldn’t it be nice if there was a way to simply turn on your phone once you arrive, and connect to a local carrier at something approaching local rates instead? Well, there is, and surprisingly, it’s already been on the market for a few years. Welcome to the eSIM.

If it doesn’t ring a bell, it’s probably because you haven’t been following Apple’s phone announcements. eSIM support has been built into the iPhone for several years now, bringing what was a niche product into the mainstream.

In theory, the technology should be a boon for travelers, and make staying connected overseas much cheaper and easier. That can be true, at least for some travelers, but things are still a bit more complicated than they should be.

So What Is eSIM, Anyway?

First things first: the “e” doesn’t stand for “electronic.” Unlike most examples that come to mind (e-mail, e-card, e-bill, e-whatever), eSIM stands for “embedded Subscriber Identity Module.” That tells you a lot about what this thing actually is.

A piece of hardware built into an electronic device, an eSIM acts like a traditional physical SIM card, identifying and authenticating a device on a cellular network. Since it’s embedded, the eSIM always stays inside the device. There’s no need or ability to remove it.

What does this mean in practical terms? Easy: a device with an eSIM will be ready to use once it is turned on and activated on a network. You don’t have to find a store, buy a piece of plastic, or fumble around with the SIM slot. Sounds amazing, right?

Which Devices Support It?

More and more devices are starting to support eSIM, helped by Apple including it in every iPhone since the XR and XS models. It’s also been available in the Apple Watch since late 2017, along with recent iPad models. Several of our current top mid-range smartphone picks offer dual SIMs: one physical, one eSIM.

Apple wasn’t first out of the gate, however. Samsung bundled an eSIM into the Gear S2 smartwatch back in 2016, and its Galaxy and Note devices more recently, while Google has included one in its Pixel smartphones since the Pixel 2 in 2017.

Of course, the hardware is only half the story. For eSIM technology to work, cellular providers also need to support it on their networks. That’s where things get tricky.

Where Are eSIMs Available?

The number of countries where you can enable local eSIMs is slowly growing. From 10 countries at launch, the list has now grown to over 60.

In many of those countries, though, eSIMs aren’t supported by all providers. In the US, for instance, T-Mobile, AT&T, and Verizon offer it, but most of the resellers like Boost and Cricket don’t.

In the UK, EE and Vodafone include an eSIM option, but O2, Three, and virtually all of the resellers don’t. The surge in eSIM-enabled devices is getting more networks to jump on board, but it’s a slow process.

Most carriers are scared of the technology, since eSIM makes it far easier for existing customers to change providers. When a better deal is available right there on the device, with no need to do any real research or go into a store, you can bet more people will switch, more often. That’s the last thing a mobile company wants.

That’s one of the reasons why, right now, even the carriers with eSIM support almost universally don’t offer it on a prepaid plan. T-Mobile in the United States is the only major exception to the rule. This reluctance is far from ideal for travelers, and another hurdle in the way of widespread adoption.

If eSIM somehow takes off anyway, that fear of losing customers could provoke price wars, with providers battling over who can offer the best deals in a bid for market share.

Are eSIMs Really The Future for Travelers?

At first sight, eSIM sounds like a dream come true for travelers. Who wouldn’t want to turn up in a new country, turn on their phone, and connect to a network with a couple of taps before even leaving the airport?

The technology sounds like it will bring nothing but benefits — but is that really the case?

When it comes to convenience, there’s little doubt eSIMs can make the process of joining a carrier much easier than it is today. Simply purchase a plan from your device, follow any authentication instructions, choose a payment method, and you’re done. There’s no need to leave your home (or the airport) to do it.

This is ideal for constant travelers, allowing them to stay connected no matter how often or how suddenly they change locations. Even for those with a home base, though, it makes travel easier, especially for those regularly going back and forth between two countries.

Business travelers or expats who visit their home country regularly, for instance, can maintain two profiles on their eSIM and switch between them at will. Other than the obvious convenience, it means there’s no chance of losing a physical SIM card when it’s not being used. Not that we know anyone who’s done that. Ahem.

Replacing physical SIMs with eSIMs also saves space inside the device. This can be used for other features, extra battery life, or just making the hardware a little smaller.

It also helps with waterproofing, with one less slot for liquid to enter. There can also be minor savings in production costs, which may or may not be passed onto the customer.

The problem, of course, is that none of these potential advantages amount to much until there’s widespread support from carriers, including prepaid options. Until then, it’s great if you happen to be in the right country, but far from something you can rely on using worldwide.

So what’s the best approach?

What’s the Best Way to Use an eSIM When Traveling?

Use an International eSIM

Where local carriers have been slow to offer prepaid eSIM options to travelers, international SIM card providers have seen an opportunity. Companies like Airalo, Surfroam, and OneSIM offer eSIM-based data services in many countries and regions around the world, enabled via an app.

They’re typically not quite as cheap as local data packages, but Airalo in particular is often pretty close, making it affordable for light to moderate data use. We often use the company’s eSIMs when first arriving in a country, or for our entire stay if we’re only there for a week or two.

You can read our full Airalo review for more detail.

Switch Your Usual Number Across

As an alternative, since almost all phones with eSIMs currently have a physical SIM slot as well, the best way for many travelers to use the embedded SIM may actually be at home. If you live in a country where carriers have eSIM support, see if it makes sense to switch across.

If so, that frees up the physical SIM slot for use while traveling without losing access to your home number. This makes the most sense for people who spend several weeks or months in a country and want a local SIM to access the cheapest rates.

All things considered, then, eSIM is a promising technology, but not the holy grail for connected travelers as yet. It needs better support, both in phone hardware and from cell carriers, before that day comes.

One day in the future, it’ll be a truly mainstream option. Until then, we’ll just go with international eSIMs , or stick with the tried, true, mildly-frustrating approach we’ve used for years: growing our endless collection of local SIM cards instead. 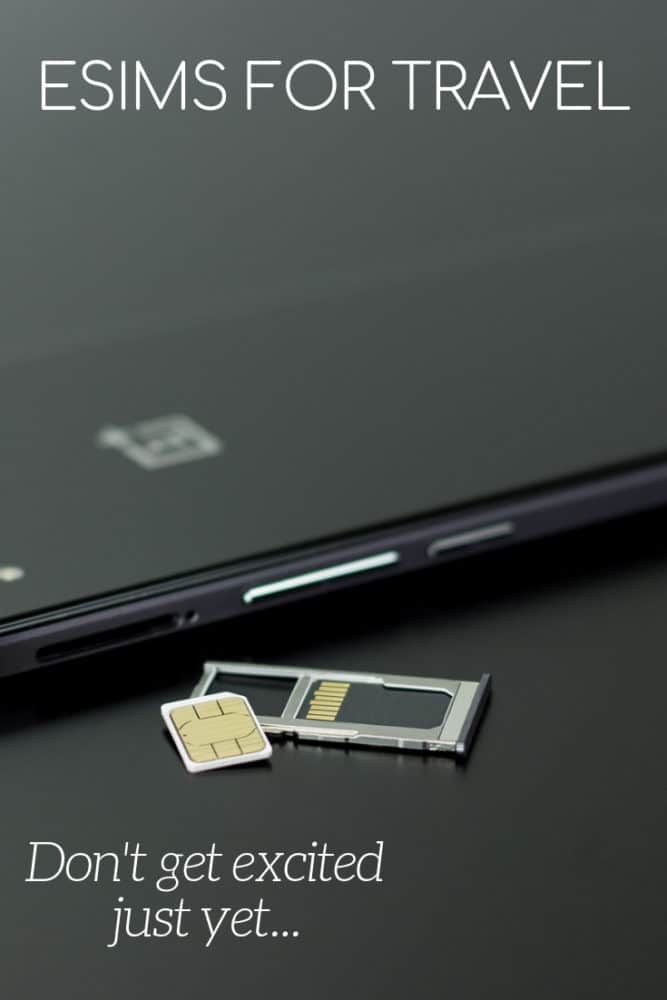