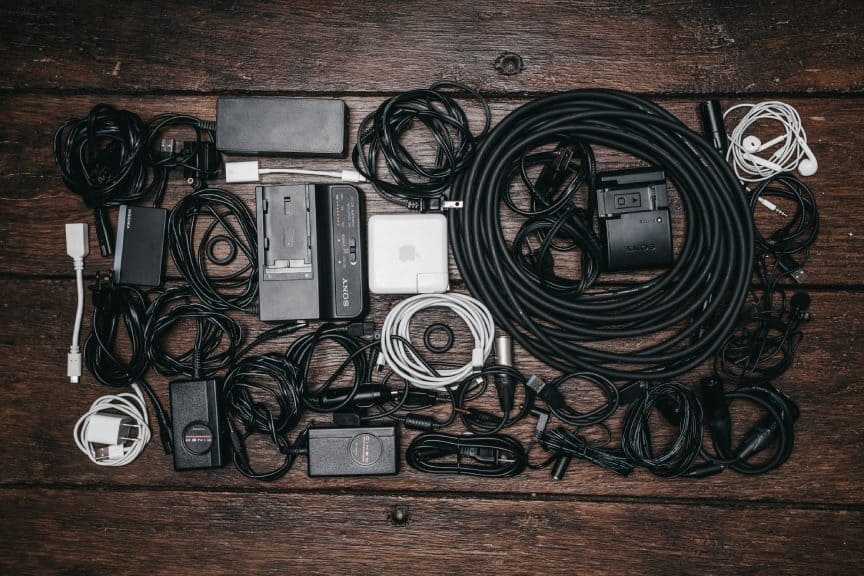 If you’ve ever felt like half your suitcase was taken up by electronics when you travel, you’re not alone. More and more of us are taking our laptops and phones, our Kindles and cameras, our hair straighteners and shavers… and a bag full of chargers to power them all.

As the old saying goes, however, you can’t put a square peg in a round hole, and that’s as true for power sockets as anything else.

With around 15 different plugs and sockets in use around the world, there’s a good chance that if you’re packing for an overseas trip, you’ll need to include a travel adapter.

How on earth did we get here? When you buy a gadget in Spain, why can you plug it into the wall in Austria, but not a few miles down the road in Switzerland? Most importantly, how do you make sure you can power your gear in whatever country you’re traveling to?

Why so Many Plugs and Sockets?

When electricity was first introduced to homes at the end of the 19th century, devices had to be cabled directly into the house wiring. As more domestic appliances came along in the 20th century, however, manufacturers realized there needed to be an easier way to connect them.

Here’s when things got messy. Each country looked for their own solution to the problem, and because few people traveled internationally, nobody much cared whether those solutions were compatible with each other. The end result was the disorganized mess of plugs and sockets we’ve ended up with today.

By the time organizations like the International Electrotechnical Commission (IEC) tried to standardize the plugs, it was too late. World War II stopped the effort in its tracks, and the issue was abandoned until the 1950s.

Countries had most of their electrical infrastructure set up by that point, which made replacing their plugs and sockets very difficult. Manufacturers weren’t bothered either, as most were focused only on serving their local markets.

That kind of inertia also helps why wobbly plugs with uninsulated prongs are still used in North America and Japan. They’re ancient in terms of design, not to mention notoriously unsafe, but it’s nobody’s priority to try to replace them.

Things are unlikely to change any time soon, either. Gabriela Ehrlich, head of communications for the IEC, told Gizmodo the outlook isn’t great. “There are standards, and there is a plug that has been designed. The problem is, really, everyone’s invested in their own system. It’s difficult to get away from that.”

It’s difficult indeed. While those internationally-agreed standards for domestic plugs and sockets have existed since the 1980s, South Africa is the only country to fully adopt them. Even then, it’s going to take 10-20 years to finish switching over.

Since plugs and sockets around the world are unlikely to change any time soon, the only way to plug in your charger while abroad is by using an adapter. But what kind do you need?

To know what kind of adapter you’ll need, you need to figure out what kind of socket is used in the places you’re traveling to.

Below are the main types of plug and wall sockets found around the world, used with permission from WorldStandards.eu. Each combination has an arbitrarily-assigned letter. We’ve listed where they’re most commonly used, but you can find a country-by-country list here.

We’ve included the voltage(s) most frequently used with each socket as well. There’s further discussion of voltage, and why it matters for travelers, at the end of this article. 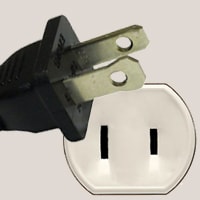 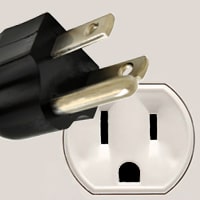 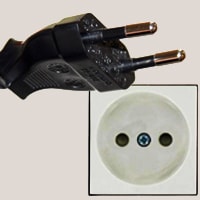 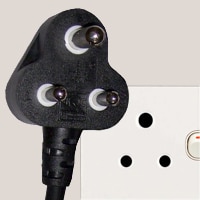 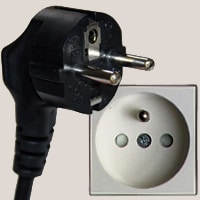 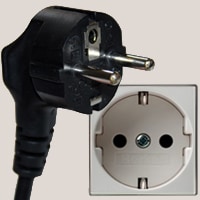 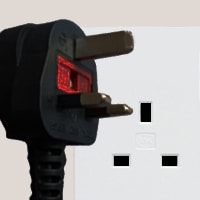 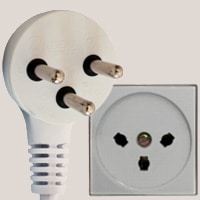 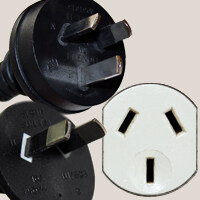 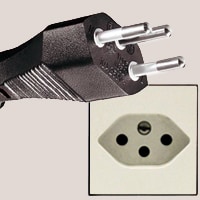 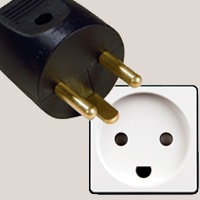 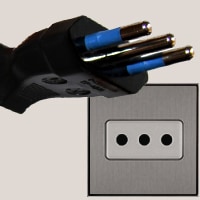 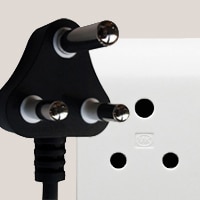 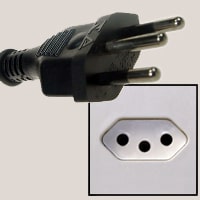 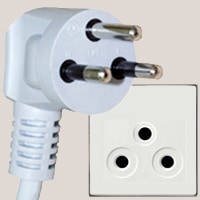 As if all that wasn’t complicated enough, bear in mind that some countries use multiple types of power plugs and sockets at once. South Africa is a good example, with two socket types in common use, and a third being rolled out to replace them.

So Which Travel Adapter Do I Need?

Travel adapters come in a ridiculous range of sizes, styles, and weights, with all kinds of extra features. It’s not easy to separate what works from what doesn’t, or even what kind you actually need for the trip you’re taking.

We’ve been using travel adapters for decades, and have thrown out almost as many as we’ve bought. There’s a lot of garbage out there. That said, we’ve occasionally found a rare model that actually does what it’s supposed to, reliably and affordably. You can find our favorites here.

To figure out which one to buy, start by asking yourself two simple questions: where am I going, and what do I need to charge?

If your entire trip is to a country or region that uses one type of power socket, you can probably get away with just buying a simple adapter for that socket. A word of advice: Buy it before you leave rather than waiting until you get to the airport, as it’ll be much cheaper.

When your travels will take you to places with different kinds of wall sockets, however, you’ll likely be better off with a universal travel adapter. Because they tend to be larger than the single adapters, they often have extra features like USB sockets or fuses as well.

Our current universal travel adapter pick is this Unidapt model, but no matter which model you go for, don’t get too excited just yet. Despite being called “universal,” there’s no such thing as an adapter that truly covers every country.

They’ll generally cover you for some combination of the ~150 countries that use North American (A/B), UK (G), European (C/F), Swiss (J), or Australasian (I) sockets. That’s great, as long as you’re going to those destinations.

If your travels take you to places like South Africa, Brazil, or other countries with less-common power sockets, you’ll need to buy separate adapters that specifically cover you there.

Some of the better universal adapters have surge protection or fuses built-in. While their effectiveness varies, they can help keep your devices safe in countries where the electricity supply isn’t very reliable. Power spikes, sags, and surges can easily destroy your electronics.

Once you’ve figured out where you’re going, think about what you’ll be charging while you’re there. It’s increasingly common for travel gadgets to charge via a USB cable, whether that’s a phone or tablet, camera, Kindle, or Bluetooth headphones.

If everything you’re taking can charge from a micro-USB, USB-C, or Lightning cable, you’re in luck. Grab a dedicated USB travel adapter like this LENCENT model, which can charge up to four portable devices at once. It has little clip-on connectors for use in 150+ countries.

Some devices like smartphones and tablets require more juice than others to charge at normal speed. Make sure your adapter has enough total and per-port output to handle your needs. For USB-A ports, 2.4 amps (12W) per port and at least 4.4 amps (20W) overall is a good place to start, but everyone’s mix of gadgets will be different.

If you’re planning to charge your laptop over USB C, you’ll need something more powerful. Check out this Anker USB C travel adapter instead, which has a far higher output, albeit with a higher cost to go with it.

What’s the Story With Voltage?

In case you didn’t have enough to think about, it’s time for a quick chat about voltage. In the simplest of terms, voltage can be compared to water pressure: the higher it is, the faster electricity will move through the wires.

And you guessed it, different countries have incompatible voltages. Because of course they do. At least we don’t have anywhere near as many variations as with plugs and sockets.

In fact, they can be put into just three general groupings: 100 volts (Japan), 110-120 volts (primarily North America and parts of Central and South America,) and 220-240 volts (pretty much everywhere else.)

There are always exceptions and variations, of course. A few countries (like Brazil) even use different voltages in different parts of the country. It pays to do your research!

Is this something to be concerned about? Unfortunately, yes. Plug your 120v hairdryer from the United States into a 230v wall socket in France, and there’s a good chance you’ll blow a fuse, fry the hairdryer, or both.

Voltages don’t directly have anything to do with the type of wall socket. Just because the plug on your appliance fits into a socket overseas doesn’t automatically mean the voltage is the same. Likewise, converting the plug type with a normal travel adapter doesn’t convert the voltage.

All that said, the voltage situation is much better these days than it was in the past, for two reasons.

First, many portable appliances are now designed to handle any common voltage. Check the fine print on your appliance or its charger, and look for a voltage range.

If it says something like 100-240 volts, you’re safe to plug it in wherever your travels take you. Most cameras, laptops, phone chargers, and similar types of device fall into this category. Things like hairdryers and curling irons, however, often don’t.

Secondly, the growth of USB-powered devices has helped a lot. Anything like a smartphone, tablet, or Kindle that charges via USB is fine, although you’ll still need to check the details for your USB wall charger itself if you’re using one.

If you discover you’ll have to convert the voltage of something you’re traveling with, you’ve got three choices: leave it behind, find an alternative that can handle a range of voltages, or buy a dedicated voltage converter.

Having so many different plugs and socket types is inconvenient and costly, according to the IEC. So is replacing sockets and plugs in an entire nation, however, and it’s also a lot of work that most countries really aren’t interested in doing. It’s much easier to just make you buy an adapter instead.

While most countries won’t change their plugs and sockets any time soon, there is some hope on the horizon. USB power and hybrid sockets that can accommodate multiple types of plug are becoming more common, especially in hotels, and wireless charging also helps make things a little easier for travelers.

Even so, given how little consistency there is within many regions (or even within countries), you’ll need to do your research when traveling abroad. Make sure you know the voltage and types of sockets used everywhere you’re going.

And don’t forget your adapter. 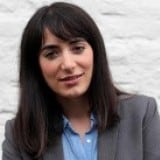 Tanit Parada Tur graduated in Law and Political Sciences, specialising in International Relations, and holds a Masters in Journalism.Working as a reporter for TV, print, and online magazines, and in digital communications for various international organizations, she likes to write about tech and travel and talk about food. 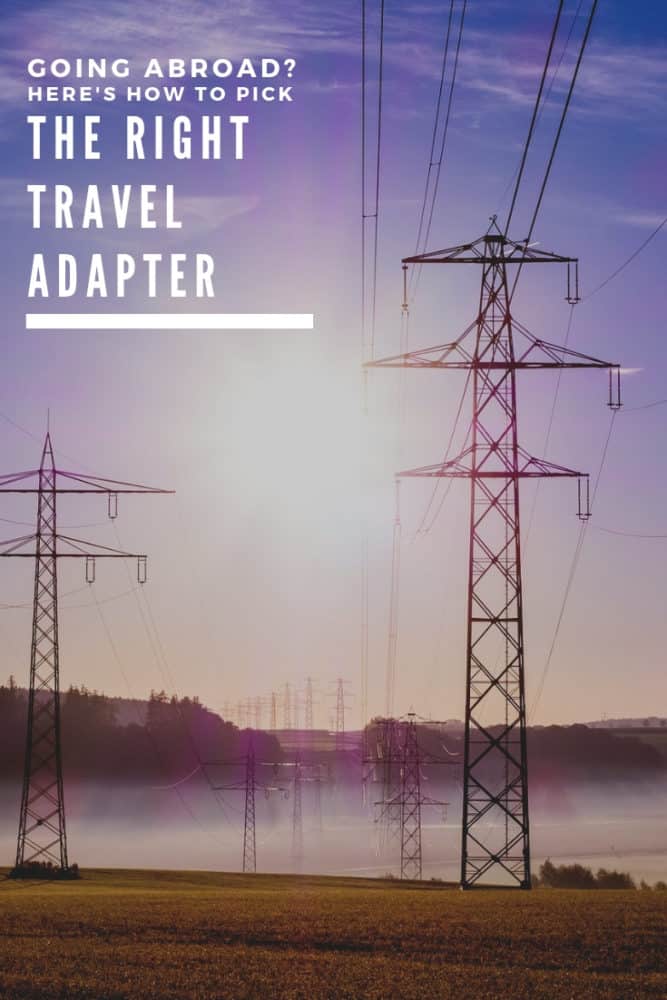