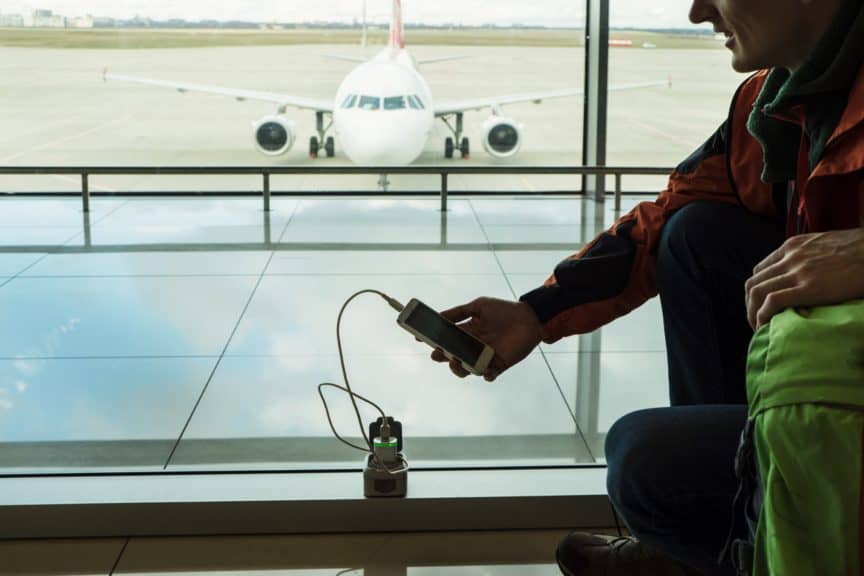 Is there any tech gadget less interesting than a travel adapter? In a world of sleek smartphones and slimline laptops, chunky adapters are about as unexciting as it gets.

Unfortunately, without those ugly adapters, all the sexy tech gear in the world becomes pretty useless when you can’t charge it overseas.

Coming in a ridiculous range of sizes, styles, and weights, with all kinds of different features, it’s not at all easy to separate the good from the garbage. Sadly, there are many that fall into the second category.

We’ve been using travel adapters for decades, though, and know what works and what doesn’t. Based on that experience, these are our current picks for the best travel adapters actually worth buying in 2022.

Note: in general, travel adapters do not also convert the voltage. If you’re traveling from a country like the United States where mains power is 110-120 volts to other parts of the world that use 220-240v, or vice versa, you’ll need to carefully check what your devices can handle.

Most gadgets designed to be used around the world (like laptops) have chargers that can deal with the full range of voltages. Any device like a smartphone or Kindle that charges via USB is also fine, but if you’re using a USB wall charger to power it, you’ll need to check the details for that as well.

If you discover that you do need to convert the voltage of your gear, you’ve got three choices: leave it behind, buy an alternative that can deal with a range of voltages, or use a dedicated converter like the Bestek model listed below.

There are about a million different kinds of universal travel adapters out there, and most of them are terrible. They’re often too heavy, don’t fit properly, are unreliable, or have other flaws that mean you’ll end up shopping for a replacement halfway through your vacation.

This Unidapt model does all the basics well at a reasonable price, and throws in a few extra features to sweeten the deal. It works in 160+ countries, with a handy compatibility list printed in the fold-up manual. There’s also an attractive carry case that provides extra protection from bumps and scratches in transit.

The adapter handles all of the usual input plugs as well, including three-pin versions like type B (North America) and type I (Australasia). That third pin isn’t grounded, however.

Where it really stands out, though, is the wide range of USB options. As more and more travel devices are charged from USB sockets, it makes sense for travel adapters to include plenty of them. This model has four USB-A sockets on one end, and a USB C socket on the side.

Total USB output is 28W, with a maximum per-port output of 12W for the USB-A sockets and 15W for the USB C. Depending on your devices, that’s enough to simultaneously charge a couple of phones or tablets at full speed, or to use all five for lower-power gadgets like Kindles and headphones.

There’s an inbuilt fuse to protect your valuable gear, and usefully, a spare fuse stored inside the adapter (because who travels with extra fuses in their bag? Nobody, that’s who.)

I’ve put mine through its paces during several months of travel, using a wide range of devices. It’s performed flawlessly, even while simultaneously charging a laptop from the AC socket, a phone from the USB C socket, and a second phone and a pair of Bluetooth headphones from two of the USB-A sockets.

The pins slide in and out easily, and lock solidly into place when fully extended. The adapter has fitted firmly into every power socket I’ve tried it in so far, without moving around or falling out like so many others.

While it’d be nice if it was a little smaller, since it can sometimes block adjoining sockets or rub against power switches, having so many inbuilt charging options makes that a minor concern.

All in all, it’s a useful and well-made accessory, with extras you rarely find in other models. As a result, it’s our top universal travel adapter pick.

If you’re traveling with a minimal amount of gear and want a small, lightweight travel adapter to go with it, take a look at this Flight 001 model.

It’s a universal adapter, but rather than being a chunky brick, it’s made up of four lightweight color-coded pieces that slot neatly together and don’t block adjoining sockets.

While it’s towards the higher end of the travel adapter price range, that cost is reflected in the sturdy build quality. The Flight 001 doesn’t fall out of loose sockets like many other models, and even after several years of bouncing around the world in my luggage, all the pieces of my one work as well as ever.

Unlike some adapters, it can handle both two and three-pin North American plugs, and comes in a small box that helpfully lists which countries each piece works in. There are no USB sockets, though, so if that’s something you’re after, you’ll need to look elsewhere.

So-called “universal” travel adapters typically cover you in the ~150 countries that use North American, UK, European, or Australasian-style sockets.

That’s fine if you’re going to those destinations. When your travels take you to places like South Africa, India, Brazil, and other countries with unusual power sockets, however, you’re out of luck.

Sure, you can pick up a separate adapter just for that trip, but if you’d rather not deal with that hassle, go for this Ceptics kit instead.

It lets you plug your existing devices into almost any socket you can find, and also handles inputs from pretty much anywhere except South Africa as well. If you buy electronics in a random destination, you’ll be able to use them wherever else you go in the world.

The downside is having up to 12 separate adapters in your suitcase. That’s especially true because they don’t come with a storage bag to keep them together. For that reason, the kit is best for people who return home between trips, rather than those on open-ended travels.

Other than that, it’s a flexible, inexpensive way of ensuring you’ll be able to power your gear, no matter where your journey takes you.

If your charging needs tend more towards phones and tablets than laptops and hair dryers, you’re best to buy a slightly different type of travel adapter. This LENCENT model has four standard USB-A ports that can output up to 12W from a single socket, or 22W in total.

In real-world terms, that means you’ll be able to simultaneously charge a pair of smartphones, or up to four lower-power gadgets like Kindles or wireless headphones, all from the one adapter.

The adapter has a North American-style plug built in. Three other connectors quickly clip on and off to provide compatibility with sockets in most countries. There’s also a small bag to keep them in, always useful for little accessories like this that are easily lost.

I’ve been using a very similar model for several years, and it’s probably the most useful travel accessory I own. That said, if you need a USB C socket and the ability to charge (most) laptops, check out the Anker Powerport III instead. It costs extra, but offers noticeably more for many travelers.

As mentioned earlier, if you’re heading to a country with a different mains power voltage to your home country, you need to carefully check the specifications of whatever you plan to plug into it. If it can’t handle the new voltage on its own, you’ll need a voltage converter to avoid damaging it.

This BESTEK model converts the 220-240v standard commonly used in Europe, Asia, and Oceania to the 110v supply used in North America and a few other places. It’s not designed for high-draw devices like hairdryers and straighteners, but smaller gadgets should be fine.

By necessity, it’s much larger than a standard travel adapter. On the upside, that means it includes three North American three-pin power sockets, plus four USB sockets with 34W total output.

If that doesn’t cover all your power requirements, perhaps it’s time to take a closer look at what you’re packing! It includes clip-on plugs for use in 150+ countries, and comes with a two-year warranty.

When you’re on a strict budget and just want a travel adapter that does the job with a minimum of fuss, this Cyongear model is where it’s at.

Sold under a variety of brand names, it’s a generic gadget that does little beyond converting one plug type into another. There’s basic protection that may or may not do anything to stop your gear being fried by power surges, and that’s about it.

So why do I recommend it? Because it’s reliable, and for under ten bucks, that’s about all I ask. I picked one up in Thailand years ago and used it every day for a couple of years. When it finally stopped working, I bought another one exactly the same that I still use to this day.

One thing to note, though, is that it fits relatively loosely into European/Asian sockets, and heavy plugs can drag it out of the wall entirely. As a result, I’ve sometimes needed to prop it up with a backpack or whatever I have to hand.

Do you like the sound of the Ceptics 12-piece plug set (above) that lets you only take the plug adapters you need for your trip, but also need to charge a bunch of devices at once? The company’s World Travel Adapter plug set lets you do exactly that.

This all-in-one kit comes with a multi-outlet adapter that includes two type B (North American-style) outlets, two USB-A sockets, and an inbuilt microUSB cable. In total, you can power up to five devices at once.

Thirteen different plugs are also included, which clip on and off the back of the adapter and cover travel in most countries from Afghanistan to Zimbabwe. If you’re planning a trip to New Zealand, for example, you’d grab the charger and Type I plug and be on your way. The product page has a full breakdown of the countries covered by each plug.

The adapter has built-in surge protection to help shield against voltage surges and spikes. There’s also a voltage indicator on the charger, so you’ll see the 220v or 110v light illuminate when the adapter is plugged into the wall.

The kit also comes with a drawstring bag, fitting several (but not all) of the adapters inside to help keep them together. The only downside is that while the “plug” side of the adapter is universal, the “socket” side isn’t, so your wall-powered devices need to have type A/B plugs. 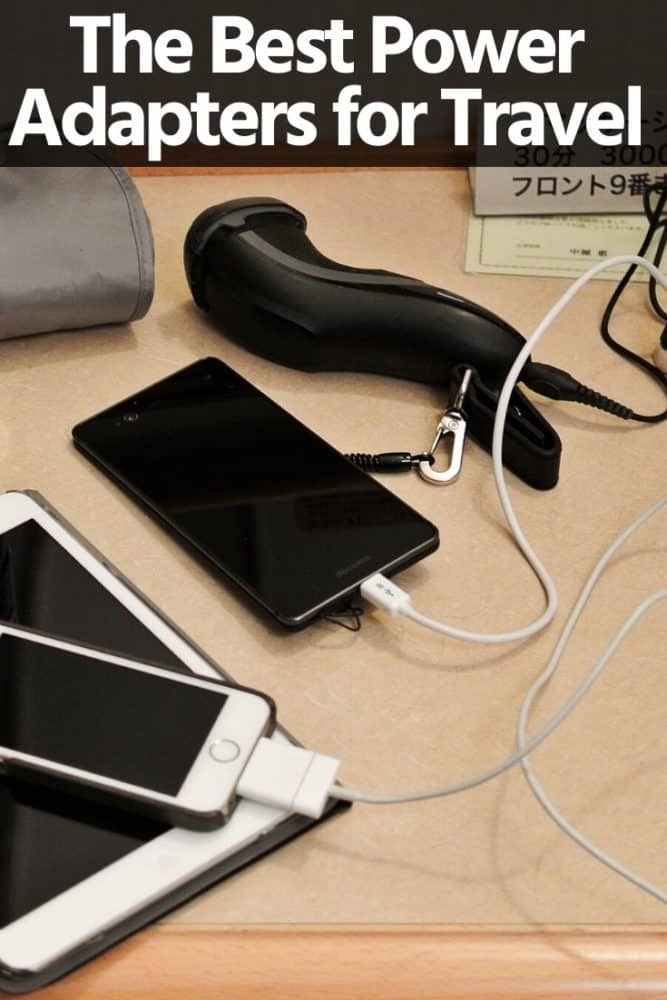