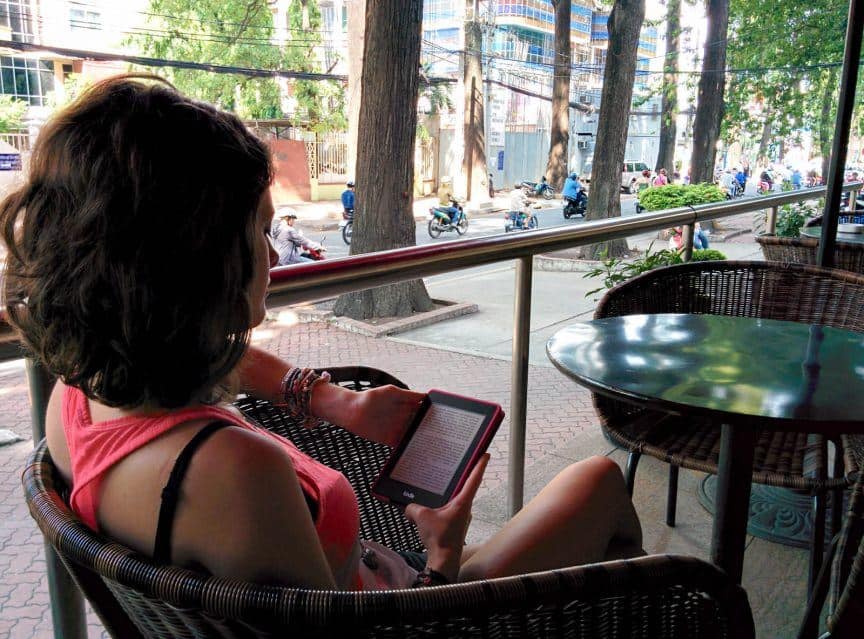 I don’t have the best luck with technology while travelling.

In the two years I’ve been on the road, I’ve managed to house a small colony of ants in my laptop. I poured a margarita over my replacement Macbook Pro when it was just one month old.

I smashed the screen of my iPhone when I placed it at the bottom of my backpack… and then dropped said backpack. I’ve accidentally thrown my camera across a park, smashing the lens.

I think it’s fair to say I’m more than a little clumsy when it comes to looking after my tech.

Hard as it is to believe, the examples mentioned above are not the worst mishaps I’ve had.

In the space of one year, I have managed to break FIVE Kindles.

I think Kindles are fantastic for travellers, and it was one of the first items I bought for my trip. I soon fell in love with it, and couldn’t imagine travelling without one.

After breaking my phone, I didn’t replace it for the first 18 months of my travels, so the free cell data on my Kindle Keyboard 3G was invaluable. Whether it was keeping in touch with friends and family while I was without Wi-fi, or loading up Google Maps to find out how to get to my hostel, I couldn’t live without it.

Imagine how disappointed I was, then, when my first Kindle lasted exactly one week.

I had just landed in Croatia and decided to head into Dubrovnik’s Old Town to explore the ancient city walls. After wandering around in 40-degree heat for several hours, I needed a rest. Pausing at a nearby bench, I decided to sunbathe and read a book for a while, but that soon became unbearable due to the heat.

As I stood up to leave, I managed to trip over a rock and went flying into a wall, completely destroying the screen of my Kindle. I was devastated.

I returned to my hostel, called Amazon’s customer service and was surprised to find they were happy to replace my broken Kindle under warranty for free. It arrived at my parents’ house in the UK within 24 hours. I had 90 days to send back the dead one — and Amazon would even pay for the postage.

My second Kindle lasted slightly longer than the first.

It was two months into my travels and I was queuing to board a plane to Taipei in Shanghai airport. We’d been waiting in line for over 30 minutes and it didn’t look like we would be moving any time soon, so I decided to entertain myself with a book.

I pulled my Kindle from my bag just as an elderly Chinese lady shoved past me, elbowing it out of my hand. It flew through the air, smashing the screen as it fell face-down on the floor.

I didn’t expect much to come from my second call to Amazon but was absolutely astonished when, yet again, they replaced my Kindle for free, without question.

I had my parents send my third Kindle to a friend in Hong Kong and picked it up the night before my flight to the Philippines. I arrived in Boracay and decided to spend my first day at the beach.

I took my Kindle with me, planning on reading for a few hours in the sun. After a few hours, I wandered out into the sea to cool down, taking my bag with me to make sure it didn’t get stolen.

I was standing in knee-high water when an enormous rogue wave hit, soaking me, my bag and, erm, breaking my Kindle within 24 hours of me receiving it.

This was starting to get ridiculous. I loved my Kindle and, without a phone, it was the only way for me to get online when I didn’t have access to wifi.

It was because of this that I forced myself to swallow my pride and call Amazon once more. It was the same story — they replaced my Kindle free of charge, sending out a replacement the next day.

My next destination was Thailand, where I was renting an apartment in Chiang Mai for 3 months. I was able to get my parents to send out my new Kindle, this time with a protective case to try and prevent it from breaking.

Two months later, I went on a scooter road trip around Northern Thailand, cramming my laptop, camera, Kindle, and a week’s worth of clothes into my tiny daypack. The combination of tight packing and bad roads meant it was only a couple of days until I took the Kindle out of my bag to find a huge crack across the screen.

By this point I had no shame. I called Amazon once more to explain what had happened. They happily replaced my Kindle once more.

By this point, my parents were understandably fed up with receiving and posting Kindles every few weeks, so I left my new one at home to collect when I arrived back in England. I even bought a brand new bag to use just for holding my Kindle. There was no way I could break this one!

It lasted just three months. I was in Turkey when I climbed out of bed and stepped straight on my Kindle that had somehow ended up on the floor. I knew what had happened before I even looked down.

I called Amazon and wasn’t surprised when they didn’t offer me a free replacement Kindle. The warranty only lasts a year from my original purchase of the Kindle, and I’d unfortunately passed that mark a few weeks earlier. It wasn’t all bad though — they still gave me a $50 discount on my replacement!

I received my sixth Kindle just three months ago and I’m pleased to say it’s still in perfect condition, despite being used every few days. The combination of a strong case and keeping it in a pocket in my bag away from everything else seems to be the winning combination. I hope.

So why does Amazon replace Kindles for free without question?

Amazon CEO Jeff Bezos recently said, “We want to make money when people use our devices, not when people buy our devices”. He then went on to explain “If someone buys one of our devices and puts it in a desk drawer and never uses it, we don’t deserve to make any money”.

It’s clear that Amazon thinks of the Kindle not as a profitable device (it doesn’t make any money on the current models) but as necessary infrastructure for far more lucrative electronic content.

Whatever the reason, the Kindle warranty is fantastic for travellers, who tend to use their device in more challenging situations than most. The Kindle is fragile and it does easily break. Knowing Amazon will replace it for free, no matter how it gets damaged, makes it even more of an invaluable product on the road.