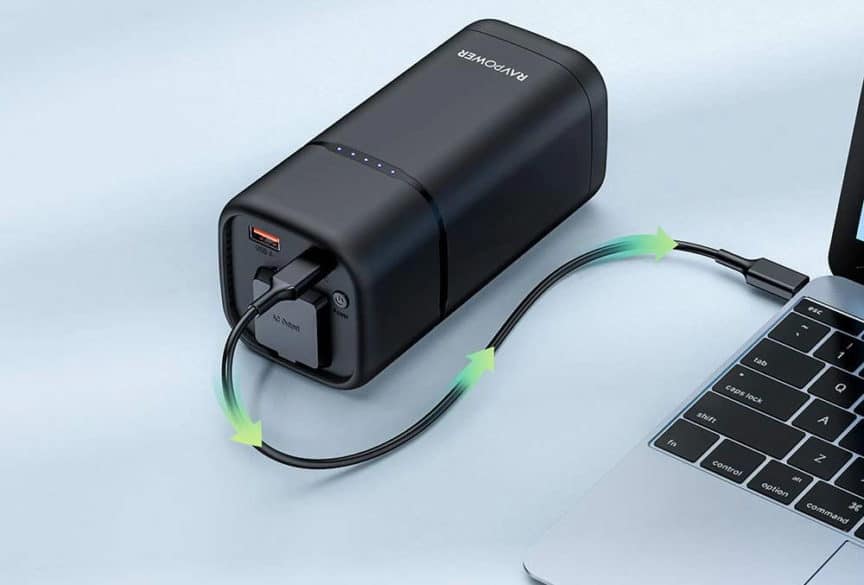 Finding a good portable battery for your phone or headphones isn’t exactly difficult, but if you’re after something that can charge a laptop as well, it’s a different story.

There aren’t all that many on the market, and even fewer that you’d want to buy. They tend to be very large and heavy, lack the power to charge anything but the smallest laptops, not have enough capacity to be useful, or a mix of all three.

That said, there is the occasional diamond in the rough. Along with a handful of other companies, RAVPower has been making solid (in every sense) models for a few years now, and they’ve been slowly getting smaller and more useful with each version.

The PD Pioneer 20000 80W Portable Laptop Charger promises plenty for those who don’t like being tethered to a wall socket. Having been disappointed by similar products from other companies in the past, however, I had a healthy amount of skepticism.

Would this finally be the battery that lets you work in the park all day, without being so big and heavy that you never want to carry it? Could it be the answer to a remote worker’s endless power worries? There was only one way to find out.

The RAVPower PD Pioneer 20000 is a plain black rectangular cube, although the rounded edges and soft-touch plastic exterior make it look a little less utilitarian than you might expect.

The front of the device holds only the company logo and five blue LEDs that show the battery capacity, while the remaining sides are largely blank, with just the specifications printed on the back.

The bottom has a circular vent for air circulation, while the top holds all of the ports. There’s a three-prong AC wall socket (available in North American and UK variants), USB-C and USB-A ports, and a small power button.

The Pioneer 20000 is capable of putting out a sustained 80W of power from the 110v AC port (100W max), up to 30W from the USB-C PD port, and up to 18W from the USB-A port. Crucially for a high-capacity battery like this, it also supports up to 30W USB-C input, and is rated to fully recharge in as little as three hours with the right wall charger.

Let’s get the obvious thing out the way first: this isn’t your typical portable battery in any number of ways, and that includes the size. It’s not small, it’s not going to fit in your pocket, and you’ll always know whether you’ve remembered to put in your bag or not.

That said, while it’s neither small nor light, it’s not excessively large for what it offers. Portable battery size is largely a matter of physics, and that goes double for those that put out a lot of voltage and have to include extra circuitry and cooling as well.

The battery ships with a hard shell carry case, secured inside with a velcro strap so it doesn’t move around. There’s also a short USB-C to USB-C cable, a mesh pouch, and with my UK variant at least, a small UK travel adapter. Other than the instruction booklet, that’s about it for accessories.

After topping off the charge in the battery, I figured the best way to start testing it was to go and work somewhere far from the nearest power socket for the day. Fortunately, the weather agreed with me.

Sitting at an outdoor table in a nearby park one sunny morning, I worked until my laptop was nearly out of juice, then plugged in the battery and… just kept going for the next few hours.

The laptop charges over USB-C, and drew a fairly consistent 24W from the battery while in use. That’s about half of what it gets from a wall socket, and unsurprisingly it charged around half as fast as usual. The laptop’s charge level did still increase as I continued to work, but very slowly.

The fan in the battery spun up after a few minutes, but while I was outside it was hard to hear it over the background hum of the world. It was much more noticeable when doing some more testing indoors the next day, though, so be aware of that if you’re planning to work somewhere particularly quiet.

I use a Windows laptop (a Lenovo Yoga 920,) but since Macbooks can be a bit pickier about what they charge from, I also charged my partner’s 2020 Macbook Pro from the battery’s USB-C port. It worked fine, pulling 27W and predicting 2.5 hours to go from 50% to full. Again, that’s about half the charging speed of the factory wall charger.

Speaking of the factory chargers, I then turned to the battery’s AC outlet and tested both laptops with their respective wall chargers. They acted exactly as if they were plugged into the wall, with both the Yoga and the Macbook Pro drawing 53W. Charging speeds were exactly the same as normal.

Since it made such short work of charging laptops, I didn’t expect any problems powering smaller devices. Sure enough, charging a couple of different Android phones from the USB-C port worked fine.

There was also no issue powering an iPhone, Bluetooth headphones, and even a small portable battery from the USB-A port. You could expect to fully charge most recent models of smartphone 5-7 times.

Powering multiple gadgets at once worked better than expected, even when using the AC outlet. While the power output from the USB ports did dip slightly with the AC socket in use, they all continued to work. I probably wouldn’t try to charge two laptops at once, but a laptop and a mobile device should be fine.

I also ran a small 13W desk fan from the AC socket, which drained 40% of the battery in just under three hours. If you’re car-camping overnight, you’d be able to keep yourself cool while sleeping and maybe even top off your phone in the morning without having to run the engine to do it.

Note, though, that the AC socket is 110-120v even on the UK model. If you’re in a country that uses 220-240v, check the power specs of whatever you’re plugging in beforehand to make sure it’s universal voltage.

The battery capacity on my two-year-old laptop battery has dropped to about 57Wh, so I expected the 74Wh PD Pioneer to at least double the time I could spend away from a power socket.

Testing this was simple enough. I turned off all power management on my laptop, connected it to the USB-C port on the battery, and started running a continuous benchmarking tool. This is much more intensive than a normal workload, but it’s also more consistent.

For the first half-hour or so, the battery had a mildly-annoying habit of spinning up its fan for a few seconds every minute. It was putting out relatively little power (15-20W) at this point, because the laptop was trickle-charging and draining very slowly down to 95%.

Once it got there, the laptop started actively charging again and the fan stayed on near-continually from then on. Three hours almost to the second after I started the test, the portable charger shut down and the laptop switched to its own battery.

Three hours and two minutes after that, the laptop battery dropped to 5% charge and the machine went into hibernation. I’d perhaps expected slightly longer running on the portable battery, but I guess that whirring fan uses up a bit of juice.

Charging the Battery Itself

Other than their physical size and weight, one of the problems with high-capacity portable batteries of old was how long they took to recharge: often, 12 hours or more. Power Delivery (PD) technology has changed the charging landscape dramatically in the last few years, though, and that’s as true for batteries as for the devices they power.

As mentioned earlier, the USB-C port on this model is rated at up to 30W for both input and output and can theoretically fully recharge in three hours with the right wall charger.

It’d be nice if RAVPower included such a charger in the box, but since it doesn’t, I used one I already had lying around. If you have a laptop that charges via USB-C, you could use the charger it came with instead.

Having drained the battery completely, I plugged it into the wall charger mentioned above and started my stopwatch. It drew a consistent 27W until very close to the end, and two hours and 43 minutes after it started charging, the final blue light switched from blinking to solid. Good stuff.

Despite my skepticism at the start of this review, I was impressed by the RAVPower PD Pioneer 20000. It lived up to its lofty claims, and didn’t miss a beat no matter what kind of laptop, phone, or other device I threw at it.

Sure, I’d like it to be lighter and smaller, but that’s true of every portable battery (and indeed, most other gadgets) I’ve ever used. Given what it’s capable of, the size feels like a trade-off more worth making than usual with these type of devices.

The only real downside is that fan, which can get quite noticeable in a quiet room. Depending on where and how you use the battery, this may bother you a fair amount, or not at all.

So who’s it for? If you’re a digital nomad traveling the world with just a carry-on backpack and a permanent tan, this probably isn’t for you. As useful as it is, it’s probably still just a bit too big and heavy to justify its place in your bag when every ounce counts at the check-in desk.

If you’re anyone else who regularly finds themselves working somewhere that power sockets are in short supply, however, the PD Pioneer 20000 makes a lot of sense.

Many laptops won’t get through an entire 8+ hour workday by themselves, so adding this battery into the mix means you’ll be able to finish up when you want to, not when your laptop makes the decision for you. I genuinely appreciated being able to work outside all day without having to check the charge level every half hour.

Even if you’re not taking a laptop, being able to power other small wall-powered devices is undoubtedly handy on a camping trip. Don’t expect to fire up your portable fridge from it, but a small fan or similar won’t be a problem.

The sub-three hour recharge time is a godsend for a high-capacity battery like this, at least if you’ve got the right charger. If you don’t, expect it to take several hours longer.

Reasonably-priced and backed by a company with a proven reputation, this is an easy device to recommend for any remote worker who doesn’t need to try and fit their entire life into a carry-on backpack.