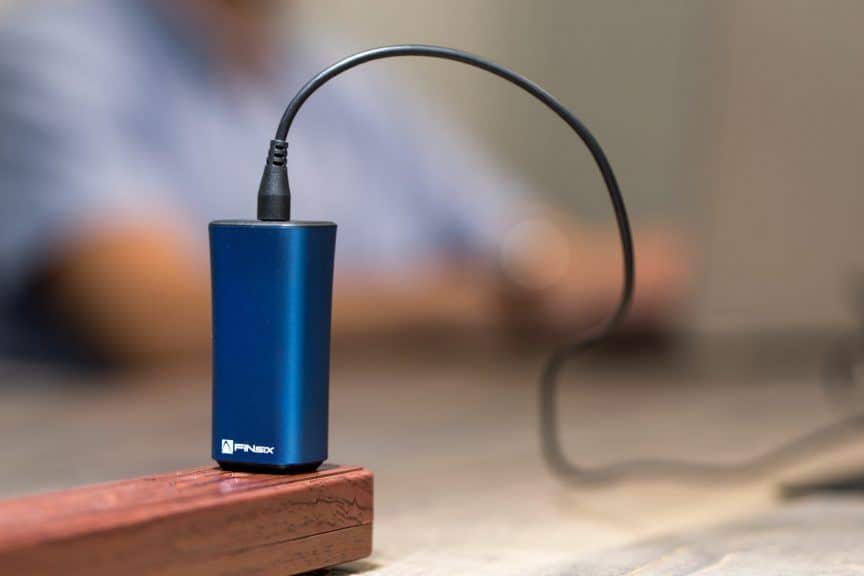 Earlier this year, I reviewed the Zolt, a miniature laptop charger that showed promise but had charging issues and incomplete support that left room for something better.

The Dart spent well over two years in development (much to the disappointment of its Kickstarter backers), and finally hit the market a couple of months ago.

The company sent me out a sample, to see whether all that time in the lab had paid off. Would this be the tiny charger to rule them all, or was it just another accessory that promised more than it could deliver?

As I said with the Zolt, while laptops have been getting smaller and lighter every year, the chargers and cables that ship with them haven’t. What’s the point of a two-pound laptop if you have to lug around another pound of accessories to keep it going?

On paper, the Dart easily lives up to its tagline of being the world’s smallest laptop charger. At 2.75” by 1.1” (7cm x 2.8cm) and a mere 3oz (85 grams), it’s noticeably smaller than even the Zolt, and as little as a quarter the size of standard chargers.

Unlike the Zolt, though, the retail version of the Dart doesn’t support older Apple laptops with Magsafe connectors. Most other recent machines are supported, including those with USB-C charging ports like the 12″ Macbook, latest Macbook Pro and many Chromebooks.

The charger can handle any laptop that draws up to 65W of power, at between 18 and 21 volts. In practice, that’s the vast majority of recent machines that travelers are likely to be carrying.

If it’s a 13” Ultrabook in particular, it’ll probably be supported, but you’ll want to double-check at the above link. It comes in five colors, so you can even match it to your laptop if you like.

As well as powering the laptop, the Dart has a single 2.1amp USB port for charging mobile devices. Unlike the Zolt, the socket is built into the six-foot cable, rather than the charger. For me, that’s a better approach. I like keeping as much weight as possible off chargers, to stop them falling out of wall sockets and travel adapters.

The Dart arrived in an attractive box, complete with the charger, cable, and a drawstring bag with nine plug tips for various models of laptop… none of which fitted my Asus UX303LN, despite it being listed as compatible.

This wasn’t a huge surprise, since the Zolt had the same issue. Unlike the Zolt, however, Dart guarantees if “none of the included tips fit, [they’ll] ship you the needed laptop tip for free.”

I contacted the company’s support channel to put that claim to the test, and sure enough, a few days later, on a different continent, a FedEx driver turned up with an envelope containing the right tip. Impressive.

Once that problem was dealt with, the rest was smooth sailing. The tip attached firmly to one end of the reversible cable, and fit snugly into my laptop. The other end of the cable sat equally firmly in the charger, which was small enough to enclose in a clenched fist. As I mentioned above, that’s quite a bit smaller than the Zolt, and dramatically smaller than the Asus factory charger.

Since I’m in Europe, and the prongs on the Dart are for US-style plugs, I needed to use a travel adapter. That’s been the downfall of the Asus factory charger in the past — it also has inbuilt US prongs, but is heavy enough that it falls straight out of most adapters. Not so the Dart. It’s been rock solid, even in power sockets halfway up a wall.

My laptop started charging as soon as it was connected, and hasn’t missed a beat since. I used it as my primary charger for over a week, for 8+ hours a day, and noticed no difference to the factory version. Even while playing full-screen 3D games that used the dedicated graphics card and had the CPU fan spinning wildly, the Dart never got more than moderately warm to the touch.

Charging time, too, doesn’t seem to be affected. While I haven’t yet sat down with a stopwatch to compare exact timings, ad-hoc testing in coffee shops shows no noticeable difference in the estimated or actual time it takes to return the battery to 100%.

The USB socket on the cable does, well, exactly what you’d expect it to do. Various phones and tablets charged at standard or quick-charging rate, depending on the model, and it made no difference to how long the laptop took to hit 100%. Being able to reverse the cable was useful, too, letting me choose between having the USB socket close to the wall, or close to the laptop.

As you can probably tell, I like the Dart a lot. It’s one of those products that just works, doing exactly what it says it will, with no fuss. Getting the right tip from customer support was fast and efficient, although given the standard ones work with 95% of supported laptops, you’re unlikely to need to contact them about it.

My only minor niggle is with the length of the cable — at six feet, it’s a little shorter than the one on many factory chargers. Given how rare it is to find power sockets in the right place in cafes and hotel rooms, it’d be nice if it was a little longer (or you could buy an extension for it).

It’d also be useful if the Dart worked with older Apple laptops, although this is likely due more to Apple’s refusal to license the Magsafe connector to third parties than it is a technical issue.

Neither of those things is a major problem, though, at least if you travel with a supported laptop like I do. Being able to power both my laptop and phone from a single, tiny charger is refreshing and useful, and as a result, the Dart has now found a permanent home in my day bag.

It’s small enough that it can stay there permanently, and means I’ve always got a charger with me, for whatever gear I’m carrying. Whether I’m going to the other side of the world, or just the coffee shop up the road, the Dart now comes along for the ride.

It’s simply the smallest, lightest, and best universal laptop charger I’ve come across so far, and that makes it easy to recommend.