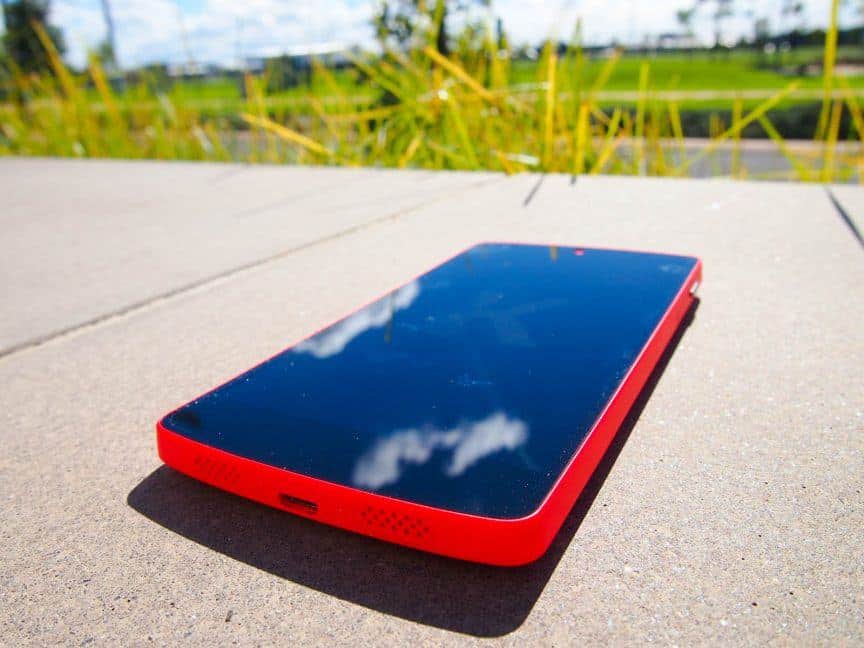 They’ve always been powerful devices, priced well below those with similar specifications from other manufacturers, and we’ve recommended them here on the site as a result.

The latest smartphone version, the Nexus 5, is made by LG, and I recently got my hands on one to see what all the fuss was about.

The biggest downside of buying my Nexus 5 was, well, actually trying to buy it. When it comes to purchasing physical devices, the Google Play store has to be the least friendly online marketplace for travellers.

I was in the US at the time, attempting to buy the Nexus with an Australian credit card. Apparently that just wasn’t an option that Google could handle – the system wouldn’t let me enter a shipping address outside Australia, no matter what I tried.

In the end a helpful friend let me use their credit card, but for most travellers who aren’t in their home country at the time, purchasing a Nexus device from Google’s online store is impossible. Sure, it can also be bought in physical stores and other online retailers — but you’ll pay more for the privilege, for no obvious reason.

Lift your game, Google. If Amazon can manage this straightforward purchasing process, so can you.

The Nexus 5 comes in three colours (black, white, and red) and two capacities (16GB and 32GB). I opted for the red 32GB version for $399 + delivery, and it arrived in a small, unremarkable box a few days later.

Other than the phone, there wasn’t much else to unwrap – a short USB cable and wall charger, a tool for extracting the SIM card holder, and some quick start guides.

The Nexus 5 uses the micro-SIM format, unlike the full-sized cards I’d been using in my old Galaxy S2, but fortunately most of the ridiculously-large collection of cards that I’d accumulated were easily modified from one to the other.

The phone felt surprisingly light when I lifted it from the box – it’s only 130g / 4.6oz – and even the addition of a rubber case didn’t add much to the bulk. My biggest fear was that the larger screen (4.95”) would make the phone unwieldy, but that turned out to be unfounded.

The Nexus fits in my jeans pocket just fine, and after a brief period of adjustment, I don’t notice the extra size in daily use. It’s definitely larger than my old phone, but it doesn’t feel too large.

While it’s a relatively plain-looking phone, it doesn’t have any sharp edges or annoying design quirks. The contoured, slightly spongy plastic back helps stop the Nexus 5 from slipping, and I haven’t managed to drop it yet. Long may that last.

The charging cable fits into place with a satisfying click, the volume and power buttons are firm and responsive, and overall it just feels like a robust, well-made piece of equipment. Even my girlfriend, an avowed Apple lover, grudgingly admitted how impressed she was with the phone’s look and feel.

The Nexus 5 is a powerful phone. and it shows. Applications load in a snap, and everything seems dramatically faster than my previous phone. Web pages render faster, photos and video are processed quickly, and even demanding games run at least as fast as on my Nexus 7 tablet.

The HD screen is bright and colourful, and text is far sharper than any Android phone I’ve used before. The difference when playing an HD video from Youtube is like night and day.

I’d been concerned about the 8MP camera before purchase, as it was often singled out as a weakness in other reviews. I’ve taken close to 100 photos and several videos so far, both indoors and in bright sunlight, and I’ve been satisfied with the results.

It’s not going to win any awards, but it’s far from terrible, and the inbuilt image stabilisation makes video noticeably less shaky. Enabling HDR mode helps deal with washed-out skies and other exposure problems, and I’d recommend doing so for everything except action shots.

At this early stage, battery life is acceptable for a high-end smartphone. While I expect it to get worse over time, the phone currently lasts a full day with relative ease. Depending on how much I’ve used it, and whether it’s connected to LTE or not, it’ll be sitting somewhere between 20 and 40% by the time it gets plugged back into the charger at night.

Something that had put me off purchasing a new phone in the past was the difficulty of finding devices with user-replaceable batteries or microSD card support. Finally accepting that one of the trade-offs of a lower price was less flexibility, I bought the Nexus 5 knowing that it had neither.

Given it only cost $50 to upgrade from 16 to 32GB of internal storage, the extra capacity almost makes up for the lack of SD card.

Not being able to replace the battery is more of a concern. When you’re on the go, it’s much more hassle to charge the phone up from an external battery than simply swap in a new one. While the internal battery remains in good condition, though, I can live with it.

Most importantly for travellers, the Nexus 5 comes unlocked from the factory. Any SIM card that physically fits in the slot should work just fine, no matter where you are in the world.

Unsurprisingly, the Nexus 5 runs the latest version of Android (4.4.2 at the time of writing). Google releases Android updates to Nexus devices long before third-party manufacturers get around to it, and keeps things simple. There are no unnecessary apps installed that just take up space.

I’ve been surprised at how much I’ve been using Google Now, especially the voice recognition. In the past I’d dismissed voice control as a gimmick, but it really does work remarkably well even with my mangled accent. In my testing, it has only got a word wrong once — better than most humans will do!

While it feels a little silly to say ‘OK, Google’ to get things started, it’s a powerful feature once you get the hang of it.

As well as basic tasks like searching the web and finding out tomorrow’s weather, you can call, text, or email anybody in your contact list, get directions to anywhere, or perform a quick currency conversion. You can set alarms and reminders based on time or, my personal favourite,  location.

A few days ago I told my phone to “remind me next time I’m at Whole Foods to buy toothpaste”, and it did exactly that. Unfortunately the toothpaste tasted a lot like soap, but not even Google can fix that problem.

There are around 70 different commands in total, and they really help integrate the phone into your daily life. The only disappointment is that voice control only works when the phone is unlocked. It’d be nice to have the option to activate it at all times if I wanted to.

As well as Google Now, there are several other Android 4.4 features that work particularly well on the Nexus 5. I’ve had a lot of fun with both the Photo Sphere and ‘Auto-Awesome’ video features. The latter is particularly fun, automatically combining a series of still images and video clips into a highlights reel.

You can add appropriate music and an overall theme to further enhance your masterpiece, and while you’re unlikely to take home the best director statue at the next Oscar’s, the end results are impressive given they come out of a phone.

I’ve been using various versions of Android for several years now, and while 4.4 (Kitkat) still has the occasional quirk, it’s easily the most polished and useful version as long as you’re running it on a device like the Nexus 5 that’s powerful enough to run it properly.

Google and LG have lifted the bar once again with the Nexus 5. It’s a speedy, well-made smartphone, with some excellent software and hardware, at an unbeatable price. To be able to pick up an unlocked smartphone of this quality for under $400 was unthinkable even a couple of years ago. If you’re in the market for a new smartphone, it’s hard to justify buying almost anything else.

Assuming that the Google Play store will actually let you buy one, we continue to recommend the Google Nexus 5 as our top smartphone pick for travellers.