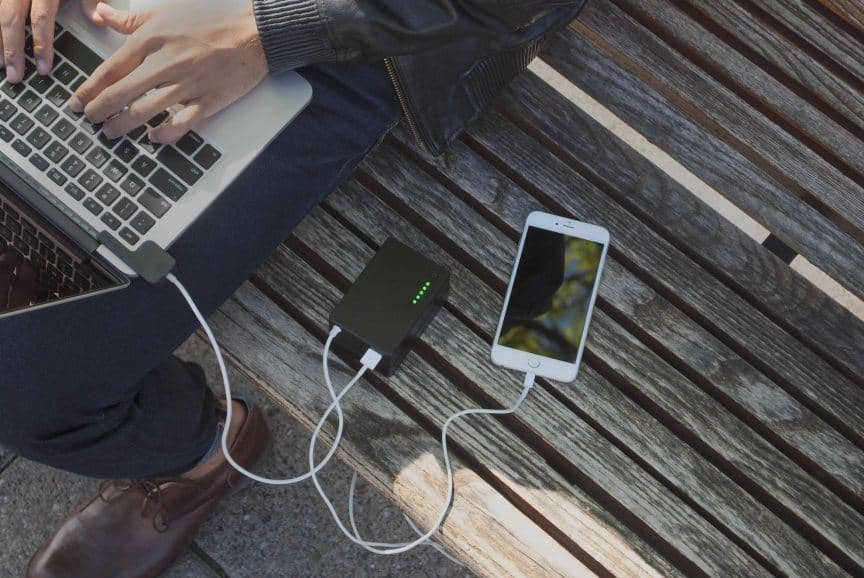 You know those really annoying people who never seem to have anything charged?

You try to get hold of them but their phone’s always off; you arrange to meet them somewhere, but can’t tell them you’re going to be late because they won’t see your message; you try to drag them out for a work date at a coffee shop, but end up waiting over an hour while they charge their laptop.

That person is me.

I’m scatter-brained, my mathematical mind doesn’t have the ability to think logically in the real world, and being connected isn’t much of a priority for me. I drive Dave crazy.

So, when the makers of BatteryBox dropped him an email to ask if he wanted to take a look at their external battery for Macbooks, he said yes without a moment’s hesitation, and quickly placed it in my backpack. Had I finally found the solution for all of my charging woes?

The BatteryBox is a black cuboid that can charge a Macbook plus one other USB device at the same time. It weighs half a kilogram and is the size of four decks of playing cards — this isn’t a slimline device.

On top  you’ll find the power button, along with five LED lights to indicate the remaining charge. On the sides are that USB port, and a micro-USB port for charging the box itself.

Thanks to Apple’s patent on the magnetic MagSafe connectors used in Macbooks, the list of third-party external batteries can be counted on one hand, so companies have to get inventive.

The BatteryBox circumvents this problem with its SnapFit connector. It’s a plastic grip that plugs into your laptop power socket and secures itself with a bit that fits… wow, this is hard to explain. Here’s a photo instead.

You get four different SnapFit connectors in the box, designed for use in Macbooks released from mid-2012 onwards, plus a micro-USB charge cable.

It all sounds pretty great, right? It would have to be, because the BatteryBox comes in at a whopping $220 (although it’s currently on sale for $190). Here’s how it fared.

My first impressions weren’t great. I was staying in an apartment without a desk or table, where the only place to sit was the bed. After attaching the BatteryBox’s connector, I got to work and the cable immediately slipped out. I soon discovered that because the connector doesn’t clip securely into place, the slightest of touches makes it drop out.

The SnapFit connector is tough to review. Apple’s patents make it very challenging to create any kind of third-party charger for its laptops, so I understand the need to get inventive and steer away from the elegant MagSafe. The BatteryBox provides a clever solution, but it just doesn’t work all that well.

As well as constantly falling out, it’s so easy to forget it’s plugged in there. Closing down your laptop lid to go and do something else results in you slamming it onto the connector. I don’t think it would shatter the screen or anything, but you could easily damage your laptop’s hinges if you do it too often.

For my second test, I headed out to a cafe to spend a day answering emails. Immediately, I could tell that this was a far better environment in which to use the BatteryBox. With a flat surface to rest the box on, I didn’t have any issues with the cable falling out and it worked just as I’d hoped.

I managed to get six hours out of the box before it ran out of charge — only an hour less than the time quoted by the company.

Next, I tried using it in an airport, which helped to confirm that you really do need to be at a table for the BatteryBox to not drive you crazy. Sitting at my gate or on the floor caused the cable to fall out every ten minutes or so; using it in a restaurant had it functioning just fine.

The approach the BatteryBox takes to powering your laptop has pros and cons. If, like me, you’re constantly moving around and charging your laptop all over the place, racking up 700 charge cycles every twelve months, you’ll find you need to replace your battery every couple of years.

The BatteryBox helps prevent this from happening, because it doesn’t charge your battery; it maintains your current power level instead. This means that you’re not blasting through cycles so fast that an Apple Store staff member can’t quite comprehend why your number is so high. Ahem.

Of course, the downside of that is that it doesn’t charge your battery. If you’re on zero power, you won’t be able to use it to turn on your laptop, and if you happen to have just enough charge to get it to turn on, it’ll maintain that 0% charge level… until the cable falls out and you lose everything you’ve been working on.

For my final experiment, I took it on a flight with me, where I found myself facing many of the problems I’ve already talked about. Due to the tiny tray tables on planes, there wasn’t anywhere to rest the BatteryBox unless I wasn’t typing and could place the box on my keyboard.

The cable wasn’t long enough for the box to sit in the seat pocket, and with it resting on my lap, the Snapfit connector fell out whenever we experienced turbulence or I moved my legs.

So, here’s what I think: the BatteryBox solves a problem, but it doesn’t do it all that well. The box is heavy, it’s bulky, it’s expensive, and it only works properly when you’re using it on a table. I’m not convinced it’s worth it for many types of travelers.

We never know what kind of surface we’re going to have to rest our laptops on, so we never know if the BatteryBox is going to be a pain in the ass or not.

Is dealing with all of those annoyances less of a hassle than not having a powered laptop for a while? Ultimately that’s up to you to decide, but for me, it wasn’t.

Ultimately, the BatteryBox isn’t something I can justify carrying long-term. Having extra weight in my daypack — which I wear on my front on travel days — frequently leads to back pain, and I just don’t have enough use for the battery to be worth that trade-off.

Overall, I think it’s a cool product, and some people will find it useful, but at a price point of $220, it really has to be perfect and for me, it wasn’t.

That said, there are people who would suit better. For instance:

If you do a lot of long-distance travel: The BatteryBox would be useful for those of you who find yourself dealing with long travel days multiple times a month and need your laptop for business or entertainment. If it is forever running out of battery when you need it, it might be worth the annoyance of a frequently-falling-out-cable to keep it powered up.

If you stay solely in hostels: If you’re fed up with fighting with backpackers over the single power socket in the room, this is a great way for you to keep your laptop charged until you’ve got the dorm to yourself again. It’s also great for those times when you’re on the top bunk and your power cable doesn’t reach the socket. That is — one more time! — if you can put up with having to put the cable back in every so often.

If you’re a digital nomad or someone else who regularly works in coffee shops: Power sockets can be scarce in cafes, so if you want to hole up and work all day, the Batterybox will prevent you from having to head back to your room by lunch. It works perfectly on a flat surface, so you won’t have to deal with any frustration.

If you fit into one of these categories and think you’d find a BatteryBox useful, you can get $15 off by using the discount code TMA15 at checkout. 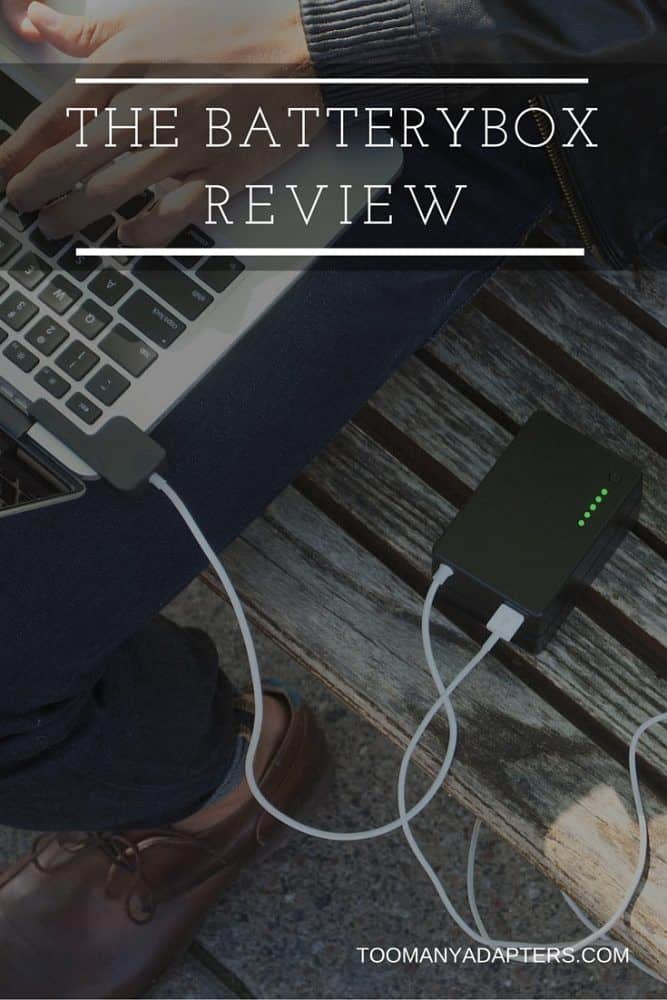