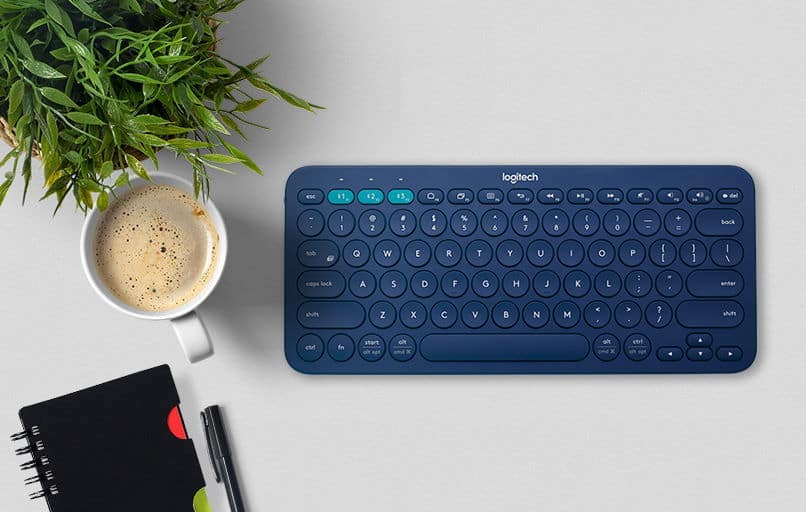 Bluetooth keyboards are a dime a dozen, but good ones aren’t so easy to find. If you’re looking for something portable, reliable, and inexpensive as well, your options really start to dwindle.

Unexpectedly faced with the need to replace my old keyboard recently, this suddenly became more than a thought experiment. After several hours of frustrating research, I bit the bullet and ordered Logitech’s K380 Bluetooth model, which arrived at the door a few days later.

I’ve been using it for a few weeks now, and unsurprisingly perhaps, I’m typing this review on it. Was it worth buying? The short answer was yes. The much longer answer is below.

The Logitech K380 is a compact Bluetooth keyboard, measuring 11.0 x 4.9 x 0.6 inches and weighing 14.9 ounces. Its most noticeable feature hits you as soon as you look at it: round keys. That decision doesn’t do much to make the keyboard look high-end, but it does help to reduce the dimensions.

As you’d expect from a keyboard this size, there’s no number pad. Some of the keys are noticeably smaller than usual, especially the top row and the arrow keys, both of which are distinctly oval rather than round.

That top row doubles as both function keys and media controls, with three color-coded “Easy-Switch” buttons that let you quickly switch between paired devices. That multi-device support is a feature of many Logitech keyboards, letting you use them with everything from phones and tablets to TVs and laptops without having to re-pair.

Speaking of TVs, while you can certainly pair the K380 with a (Bluetooth-capable) television, it wouldn’t be my first choice due to the lack of trackpad or other pointing device. The larger K400 or K600 models would be a better option if that’s your main purpose.

The K380 comes in two variants, aimed at either PC or Mac users. Both models will work with either computer, but the keyboard layout and markings are slightly different. Having a Start button or the Cmd key in the right position makes more of a difference than you might expect, especially for touch typists.

The keyboard runs from two AAA batteries, which come in the box and slot into a compartment on the back. That’s less useful than a rechargeable internal battery, but with an advertised runtime of up to two years, it’s hard to complain about.

There’s a small, recessed power slider on the left side, and four rubber feet on the base that stop the keyboard from moving around if you’re a frenetic typist.

In terms of configuration, the Logitech Options software (Mac or Windows) lets you tweak the settings a bit. You can change the top row to act as function keys by default, for instance, or change the action assigned to a few of them.

The K380 comes in a small range of colors. I went for the PC version, in dark blue. Pairing was fast and straightforward with every device I tried it with: a Windows laptop, a Macbook Pro, an iPhone, and a couple of Android devices.

Holding down one of the colored buttons for three seconds put the keyboard into pairing mode, shown by a rapidly flashing light above it. It was then just a matter of adding a new Bluetooth device on the phone or laptop, tapping in the six digit code that appeared if necessary, and waiting a few seconds for it to connect.

No matter which device I was using, characters appeared immediately. There was none of the lag, dropped connections, or missed keystrokes that plague many cheaper Bluetooth keyboards, and it was a surprisingly smooth experience.

The shape of the keys didn’t take as long to get used to as I expected, and the slightly concave keycaps on the alphanumeric keys made it easier to hit the right spot. I found the K380 to have plenty of key travel, and had no problems with comfort or fatigue even when writing thousands of words a day.

Working from home, often at the same table or in the same room as my partner, I’m pretty conscious of noise. In the interests of a happy relationship, loud, clacky keyboards are a non-starter. Thankfully the K380 is nice and quiet unless you’re really pounding the keys, similar if not better than most laptop keyboards in that regard.

The tiny arrow keys were reliable and accurate, as were the larger keys like Enter and the spacebar that can be a bit unresponsive on the edges on other keyboards. The only real change I’d make would be to increase the distance between the Caps Lock and A keys, as it’s a little too easy to hit the former by mistake.

Finding a portable keyboard that’s good for travel isn’t easy. It needs to be lightweight but not flimsy, small but not cramped, 100% reliable, and have several weeks if not months of battery life. Not much to ask, right?

For years I used Logitech’s K810, widely regarded as the best travel keyboard out there right up until the point where it was discontinued by the company and not replaced with anything even vaguely similar. No, I have no idea why.

Digital nomads and others have been lamenting that decision ever since, and I started doing the same when mine finally decided it was sick of being stuffed into a backpack. Three of the keys stopped responding one day, apparently never to work again.

I’ll admit that I only purchased the K380 grudgingly, expecting it to be a short-term option until I came across something better. Several weeks in, however, it’s a lot better than I’d anticipated, and I’ll be traveling with it for the foreseeable future.

Probably the biggest compliment I can give any keyboard is that I don’t really think about it, either when it’s in my bag or in front of my laptop. It’s a tool, nothing more, and that’s the case here. It just works, without any real frustrations.

The lack of backlighting is a minor annoyance, but far from a deal breaker. I’ve no real way of knowing how long the batteries will last, but having read several reports of people using their K380 for over two years on the same set of AAA’s, I’m feeling pretty confident I won’t need to swap them any time soon.

While the typing experience was a little better with the K810, and it definitely felt more robust, it was noticeably bigger and heavier in my bag. There’s also the little matter of price: that keyboard cost nearly three times as much as the K380 when I bought it, and even that was on sale. It should have been better.

So far, of course, I’ve only traveled across town a few times with the new keyboard, not thousands of miles around the world. If and when things open back up, will the K380 handle several weeks or months on the road? That’ll be the real test, and only time will tell.

In a world of flashy new technology, it’s hard to get worked up about a keyboard. You’re unlikely to get excited about the Logitech K380, but more importantly, you’re unlikely to be let down by it either.

For what it costs, there’s precious little to complain about. It’s quick to connect, and hasn’t lagged or dropped its connection once while I’ve used it. Comfortable and reliable to type on, it stays quiet unless I’m really hammering the keys.

Being able to pair with multiple devices increases its usefulness, and if the advertised battery life is anywhere near accurate, I’ll probably only replace them two or three times over the keyboard’s lifetime.

The plastic housing gives me some concerns about longevity, but at least at this early stage, there’s no evidence of wear or damage. If that changes, I’ll update this review, but after a few weeks, so far so good.

In summary, then, whether you’re looking for a good, reliable Bluetooth keyboard to travel with or just want something inexpensive to use in your home office, the K380 fits the bill surprisingly well. It’s not the best portable keyboard I’ve ever used, but it’s not far from it, and provides impressive value for money for a wide variety of uses.

Main image via Logitech, other images via Amazon