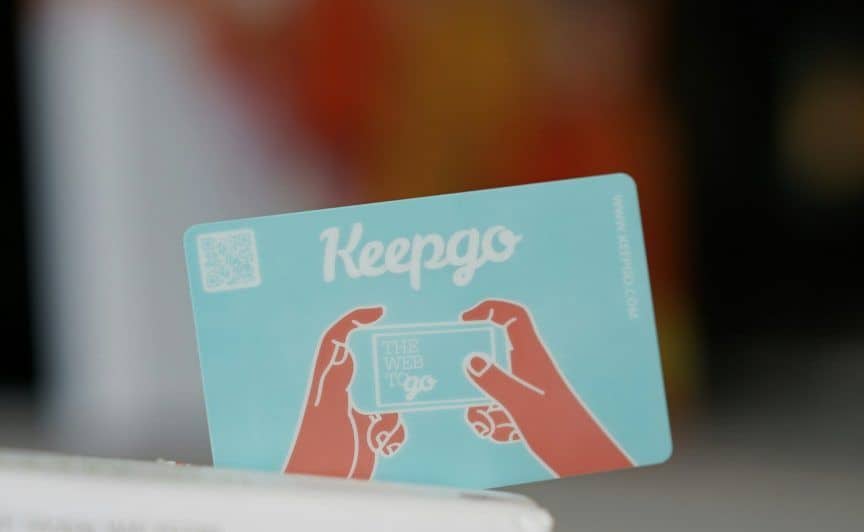 Need to stay connected when abroad without having to worry about expensive roaming fees from your mobile phone provider?

Traveling to a few countries and feeling overwhelmed with all the local SIM options and local plans?

Fortunately, tackling this problem is more possible than ever these days. Keepgo is just one of the newest of the bunch to offer an “international SIM” option for travelers.

The idea with an international SIM is having one SIM card with data access around the world, with one rate and no worries about extra fees or overage charges.

KeepGo offers a pair of options for their globetrotting customers.  The first is a data SIM card for unlocked phones, and the second is a mobile Wi-Fi hotspot.  Both offer coverage in 64 countries in the Americas, Europe and Asia and data credit that doesn’t expire for a full year.  They’ll also ship the SIM card or hotspot to more than 30 countries around the world for free.

We decided to try out both of their options (data SIM for an unlocked phone, and a mobile hotspot) in different parts of the world and put them to the test.

KeepGo SIM (by Joel in Europe)

When we first discussed reviewing KeepGo, one question kept coming up. “Who needs this when SIM cards are easily purchased and inexpensive in most countries?”

The answer was “me” – and anyone else planning to country-hop through several places for a few days or a week at a time.  So, how did it do?

The first thing to know is that this is a data-only SIM card. The second is you’ll need to have an unlocked phone to use it.  Since it’s data only, it won’t give you a number if you want to make calls to a local friend, but works fine if you want to call home on Skype.

And for that, it worked exactly as advertised. Over a month of testing, I used it in two different Android phones (Asus Zenfone 2 and Samsung Galaxy S4) and in three countries (France, Italy, and Croatia). The data connection was problem-free in all situations, including tethering to my laptop.

The SIM card was delivered to my hotel in France on schedule, waiting for me when I arrived. The package contained a small users guide and a credit card-sized SIM card holder. In addition to the nano-SIM, there were a number of adapters and empty slots to use in phones needing a micro or standard SIM.

Installation was simple, although it did require digging into the phone settings to create an Access Point Name (APN). Essentially, you need to create a bridge from your phone to KeepGo that connects via whatever cell network you’re able to access.

The creation of the APN is simple and KeepGo provides detailed instructions in the aforementioned Users Guide.

KeepGo also provides an app (Android/ iOS), which I downloaded but never used for much of anything. The app has a few functions, but much of it is just a digital version of the Users Guide. If you burn through a lot of data, the app allows you to easily recharge your account online.

One of the oddities of the app is that you have to manually input the SIM card ID number to check or refill your balance, yet another app function tells you the SIM ID. For some reason, those two functions aren’t connected, which could save you the trouble of typing in the ID. It wasn’t a huge issue, just strange.

One other nice feature is that text messages were sent to my phone as I burned through the data (at 75% and 90% used). That was helpful in ensuring I didn’t run out at an inopportune moment.

While cheaper local SIM cards can be had, dealing with potential roaming issues when heading through multiple countries wasn’t a problem with the KeepGo.

Instead of country hopping like Joel, I was heading down to a conference in the USA for a couple of weeks.  KeepGo shipped the hotspot to me in Canada well before I departed on my journey south, so I unpacked it, charged it up, and tossed it in my carry-on.

The KeepGo hotspot itself is a small unit about the size of a mobile phone. When powered on, it allows you to connect to it like a Wi-Fi hotspot in your home, office, or coffee shop.  The difference with this is that you can take it with you wherever you go.

For this trip, I wanted to be able to receive calls and text messages on my phone with my Canadian phone number, but didn’t want to deal with outrageous data roaming fees from my provider ($80 for 500MB!).  So I turned off mobile data on my phone, and connected to the KeepGo mobile Wi-Fi hotspot for data instead.

There’s not a lot to the little white hotspot itself. There’s a power button, a few lights for information, a charging plug (micro-USB), and a little sticker showing the hotspot SSID and password you’ll need to plug into your devices to connect.

I would get 3-6 hours of power when using the hotspot, with the shorter amount in areas with less coverage, and it charged back up in 1-2 hours.

The charging cable, as well as plugs for North America and Europe were included in the package. You could use any micro-USB cable and charger, though, so there’s no need to carry too many adapters. See what I did there?

Data speeds were often super fast (LTE)… at least in the main cities.  In the USA, KeepGo uses T-Mobile (see a list of all of their partners worldwide.) This meant coverage could become pretty limited when leaving more densely-populated areas.

After leaving Portland, Oregon and heading east, my speeds dropped down to Edge, then GPRS.  When driving through South Dakota and Wyoming, coverage was nil and I was left with offline Google Maps. It’s worth considering where you might be traveling in the USA when looking at the KeepGo.

The KeepGo Hotspot is a great option if you’re traveling as a group, have more than a couple of devices yourself, or don’t have an unlocked phone.  It does mean that you’ll have another device to carry, and another gadget to keep charged up though.

Is the KeepGo Convenience Worth the Extra Cost?

While it’s true that you can buy a much cheaper local SIM card in most places, for some people, it’s just not an efficient use of the time or resources.  This is especially true if you’re only visiting a country for a short time.

The data is valid for an entire year, which is a nice benefit if you take frequent short trips and you don’t use a lot of data. If you don’t have an unlocked phone and local SIM cards aren’t an option at all, the KeepGo hotspot could save you a lot of money on roaming fees.

There is a cost to the convenience, but KeepGo is a decent option in the international SIM card scene for sure.