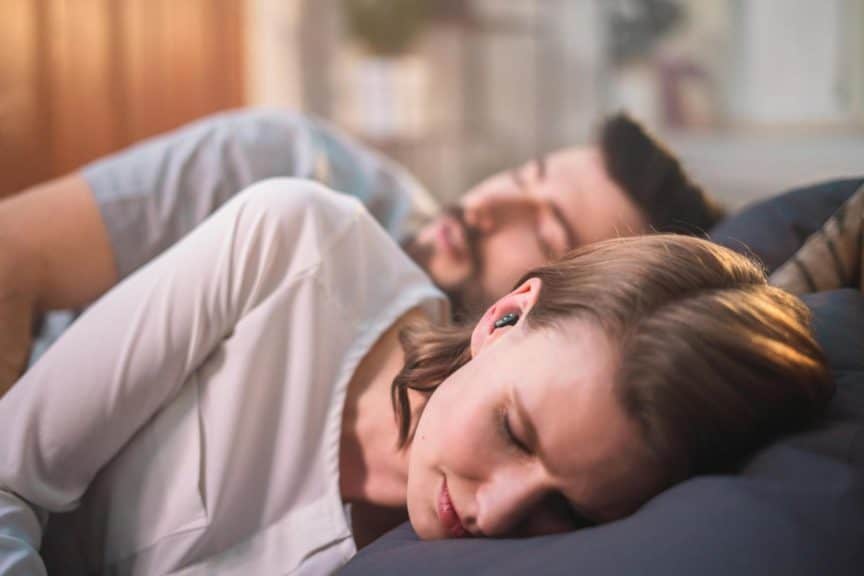 It’s fair to say I’ve had my share of sleepness nights over the years.

From drunk backpackers to barking street dogs, noisy late-night bars to housemates snoring loud enough to wake the neighborhood, I’ve been wishing for some kind of magic device that turns down the volume on the world for about the last 25 years.

I’ve tried about a dozen different kinds of earplugs, plus noise-canceling earbuds and headphones more recently, but never found anything that really reduced the noise while still being comfortable enough to sleep with for eight hours.

As a result, when I first saw QuietOn’s crowdfunding campaign for their “noise-canceling earplugs,” I watched it with interest and was glad to see it pass its funding goal. A few months later the company reached out to see if I’d be interested in taking a pair of the now-finished earbuds for a test drive. Or a test sleep, if you will.

Note: the company has now released the successor to the QuietOn 2 that’s smaller, more comfortable, and has a longer battery life. The QuietOn 2 is still available while stocks last, but you can read our full review of the QuietOn 3 here.

Unlike most of the gear I review these days that tries to cram in a hundred different features, the QuietOn 2 earbuds are simple devices.

They don’t have Bluetooth or inbuilt storage, so you can’t play music, podcasts, or anything else through them. There’s no app, and beyond a single button, no configuration options. They’re purely for blocking out noise and helping you sleep: nothing more, nothing less.

That button switches between “silent” and “hearing” modes, which are fairly self-explanatory. The first enables noise-cancelation, the second brings in outside noise. The earbuds come with medium-sized silicone tips installed, along with smaller and larger pairs to help try and get the perfect fit.

Battery life is rated at 20 hours, so you should get a couple of night’s use out of each charge. The charging case is powered by the included micro-USB cable, and there are a pair of blue LEDs on the front that light up when each earbud is charging and go out when they’re done. Charging takes a bit over an hour.

Note there’s no battery in the case, so you need a USB power source of some kind to charge the earbuds. Given the long battery life, that’s less of an issue than it could be, and you can always use a power bank if you need to.

The earbuds arrived in a compact box, with the case, earbuds, cable, tips, and small instruction booklets in several different languages. The case was small and lightweight, with the company logo printed on the top and magnetic inserts to ensure the charging pins on the earbuds sit in the right place.

The earbuds themselves were tiny, noticeably smaller than any wireless earbuds I’ve used in the past. It’s not really a fair comparison, of course, because they don’t need to include any speakers or Bluetooth circuitry, but still. These are the only earbuds that have fit completely inside my earlobe while in use, with nothing protruding.

After topping up the charge level until the lights on the case went out, the first step was finding the right fit.

The tighter the fit, the better the noise cancelation apparently works, so I spent a while experimenting with the different options. Removing and installing the tips was a bit fiddly, but the large ones seemed to block out the most noise, so that’s what I went with in the end.

Inserting the earplugs likewise took a little practice, but wasn’t difficult. You basically push the rubber tip into your ear canal with the rest of the earbud pointing upward, and then rotate it backward to fix it firmly in place.

There’s not really much to say about using the QuietOn Sleep: as mentioned earlier, they’re pretty simple devices. The only control is that little button between the two charging pins that switches between the two modes.

As small as it is, the raised button isn’t hard to find with a fingertip, and it’s pretty obvious which mode the earbud is in. That said, I’m not sure I’d be all that likely to switch modes over just removing the earbud when I need to listen to someone. It’s good to have the option, I guess. Each earbud operates independently.

I didn’t sit down with a stopwatch to measure the battery life, but the earbuds were still working after two full nights of use. There’s no notification when they’re going flat, though: the noise-canceling just stops.

The earbuds power on automatically when you remove them from the case, and off when you put them back in. There’s no other way to turn them off, so you’ll want to store them in the case when they’re not in your ears.

It probably helps that I’m pretty used to wearing earplugs, but I didn’t find the QuietOn buds uncomfortable while I was sitting upright or lying on my back, even for long periods.

I’ve been sitting at my desk with them in all morning while writing this review, and haven’t felt the need to remove or even touch them at all. Likewise, they remained comfortable when I tested them for an hour with an afternoon nap on the sofa. The struggle of being a gear reviewer is real.

I attempted to sleep with the earbuds in my ears for several nights, but never managed to keep both of them in for more than an hour or two. Although the buds fitted inside my earlobe, I found the hard plastic casing still pushed uncomfortably into the ear that was lying on the pillow.

Changing my head position helped a little, and there was definitely a sweet spot where I didn’t notice them all that much, but as soon as I drifted off to sleep and moved my head slightly, I’d wake up again.

As with every other set of earplugs and earbuds I’ve worn in the past, noise was also an issue whenever the earbuds moved on the pillow. Due to the airtight seal, the vibration gets conducted and amplified within the ear canal and sounds surprisingly loud.

In the end, I just found myself sleeping with a single earbud inserted in my “outer” ear instead. It didn’t block as much noise, but it did result in more sleep.

When it comes to keeping noise out of your ears, there are two basic approaches: passive noise isolation and active noise canceling.

The former is used by earplugs and earmuffs, physically blocking the sound from entering your inner ear. The latter uses microphones, speakers, and technical wizardry to analyze the incoming sound and play an opposing waveform to cancel it out. The QuietOn 2 does both.

To test out their effectiveness, I used a few different approaches:

All in all, the QuietOn earbuds performed largely as expected. They blocked out more sound than foam earplugs, but less than the over-ear headphones. That was true for all frequencies, but I did notice a little more sound getting through in the mid and upper parts of the range.

That’s to be expected: the company says the earbuds are tuned for lower frequencies like snoring and aircraft engine noise. I could still hear the occasional rumble of a car or truck going past, but it was much quieter than usual and wouldn’t have woken me up if I was sleeping.

One thing worth mentioning: the effectiveness of both the passive and active noise reduction was significantly affected by how well the earbuds fit in my ear. When using the small or medium tips, or if the earbuds weren’t seated perfectly, they let in a lot more sound.

QuietOn’s first model of noise-canceling earplugs was aimed squarely at air travelers. Blocking out cabin noise while sitting upright in your seat is the ideal use case, and several airlines signed up to sell the company’s products inflight.

Making a version for sleepers is much harder, and kudos to the company for attempting it. If you sleep on your back and suffer from a noisy environment (or noisy partner), you’ll likely get genuine value from these earbuds.

They reduce noise more effectively than traditional earplugs, stay firmly in place, and are more comfortable to sleep in for long periods than other wireless earbuds or (especially) headphones.

If you sleep on your front or side, they’re a harder sell. While you may happen to have the exact combination of ear shape, pillow, and positioning to sleep comfortably and noise-free all night, you also may not. The company does offer a 30-day return policy, at least, so you can always try them and find out.

The other issue is the cost. The QuietOn 2 usually retail for 199€/$199/£179, which puts them in the same price range as noise-canceling earbuds like Apple's Airpods Pro or Sony's WF-1000XM4.

If sleep is your main priority, the QuietOn earbuds are still the better option. If not, and you’ve only got the cash for one set of noise-canceling devices, though, you’d be forgiven for going for something that can play music and make calls as well.

So, the final word. I can’t recommend the QuietOn 2 earbuds for everyone, but the small size, long battery life, and solid noise reduction still makes them a good choice for some. If you think that might be you, enter code TMA10 at checkout to get 10% off your purchase. 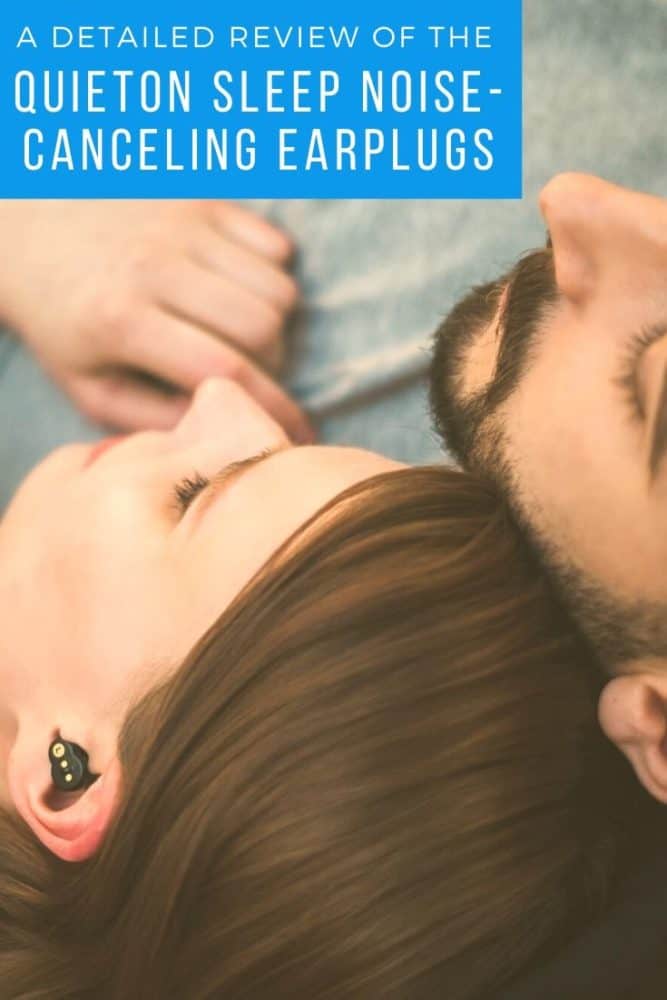