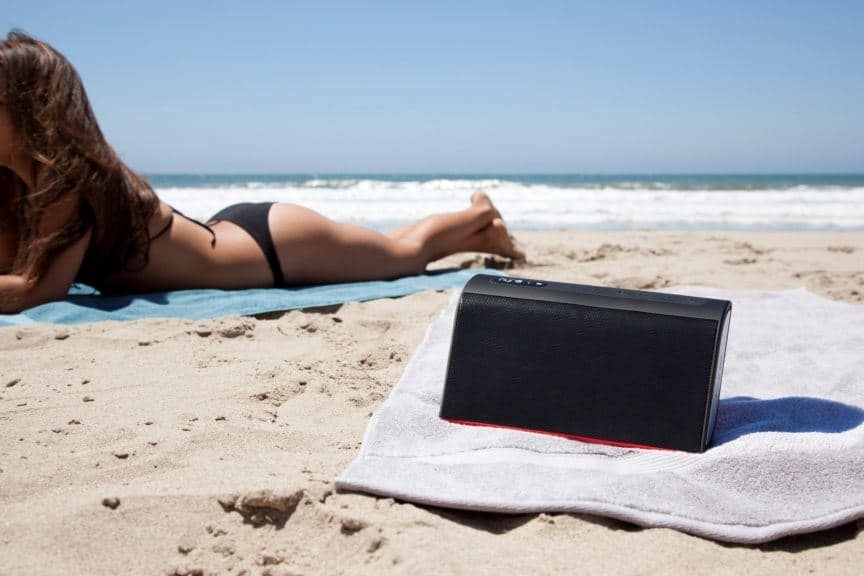 It’s been a while since we last reviewed any Bluetooth speakers, and for good reason. There hasn’t been much innovation in the market in the last few years.

Pretty much everything falls into one of two camps: small, cheap, and light with limited bass and volume, or higher-end models that cost a lot and take up more room in your luggage.

The size and weight of the NYNE TT Portable Bluetooth Speaker put it in the latter category, but it’s noticeably less expensive than the competition. Does that make it better value, or were too many corners cut to hit that lower price?

The company sent me a sample so I could decide for myself.

My first impression when the package arrived was “Wow, this thing is huge!” The unboxing was almost Apple-like in its quality, all thick, glossy cardboard and separate compartments. Thankfully, once I had the speaker in my hand it was a more reasonable size for travel.

Other than the unit itself, the NYNE TT came with a neoprene cover and optional shoulder strap, and 3.5mm cable if you don’t want to use Bluetooth. In a nice touch for those heading overseas, the power adapter has four clip-on plug options for different countries.

The main buttons along the top are for power, volume and skipping forward and backward. There’s also a multi-purpose one that lets you answer and hang up incoming calls, as well as activate the voice dialer if your phone has one.

A pair of icons indicates charge level and Bluetooth status, and the company logo illuminates when the device is switched on. In a dark room, the lights are quite noticeable. That’s something to bear in mind if you’re planning on using the speaker as you sleep.

NFC pairing is done via a small labeled area on the left side of the speaker. Near the base sit power and auxiliary sockets, an on/off switch and a 1amp USB charging socket. That’s useful if you’re on the beach and your phone starts going flat.

The battery lasts up to ten hours, although it depends on whether you’re using Bluetooth, and how high you’ve cranked the volume.

I was impressed with how easy it was to pair the TT with every device I could find. I used NFC with a Nexus 5, and just tapping in the right place bought up a confirmation box. For everything else (Nexus 7, Asus laptop, Macbook Pro and iPhone 5) I used Bluetooth, and it was quick and seamless.

That’s no mean feat. I don’t think I’ve ever managed to connect so many devices to a Bluetooth gadget without one having problems.

After pairing (signified with a satisfying beep), it was time to test the most important feature: the sound quality. For this I set the speaker up on a bookcase in a small living room, and played several genres of music and a couple of podcasts.

For someone used to the tinny sound coming out of laptop speakers, it was a revelation. Bass notes were deep and rich. For the first time in years, I had to adjust EQ to reduce bass response rather than increase it, especially for podcasts with male voices. Mid-range sounds were clear and sharp, and it was easy to pick out high treble sounds without any accompanying hiss.

In general the Bluetooth connection worked well, although it varied somewhat between devices. From a distance of a few feet there was some static when I walked betwen the speaker and either Apple device, but the Asus laptop had no such problem.

After putting them in my pocket, both Android devices held their connection as I danced around the house until I literally lay on top of them. No, I sadly don’t have video.

I cycled through a full range of pop, rock, classical, and electronica, with a bit of hair metal thrown in to displease the neighbours, and enjoyed listening to all of it.

While you wouldn’t replace your existing home theatre system with the TT, at 17W and with sound this good, there’s no reason it couldn’t be an everyday music player around the home. For something designed for use on the road, that’s impressive.

When it comes to the travel side of things, there’s a lot to like about the NYNE TT. The neoprene case provides decent bump and spill protection, without looking cheap.

Neither the case or speaker is waterproof, so be careful around the pool or ocean, but there aren’t many annoying gaps or holes for sand and dirt to get in.

The clip-on plugs for the charger mean you won’t need a separate travel adapter, and the removable shoulder strap makes the speaker easier to carry. 10 hours of battery life is enough to get you through a full day at the beach, and being able to charge your phone at the same time is very useful.

The only problem is, unsurprisingly, the size. At roughly 10x6x2 inches and two pounds (26x15x5 cm, 900g), the TT doesn’t just slip unnoticed into a daypack or handbag. If you travel light, especially if you’ll be on the move all the time, you may not be able to justify the extra bulk.

While the speaker feels robust, it’s not something I’d want to put in checked luggage. That means finding extra room in your overstuffed carry-on bag if you’re flying somewhere.

For that reason, it seems ideally suited to driving holidays and weekend getaways, or on the flip side, for those spending weeks in one place. I’ve just rented an apartment in Spain for a few months, for example, and the TT easily made the cut when packing my bag the night before.

Overall I was more impressed with this speaker than I expected to be. The sound quality was better than any travel speaker I’ve used before.

Little extra touches like international plugs and a USB charger lifted it above the pack. To answer the question at the start of this review, the sub-$70 price point represents great value rather than corners being cut.

While the lack of waterproofing means the UE Boom remains our “large speaker” choice for active outdoor use, the lower cost and ease of use makes this our new pick for most travellers.

If you’re looking for a high-quality travel speaker and can make the space in your bag, it’s well worth filling it with the NYNE TT. 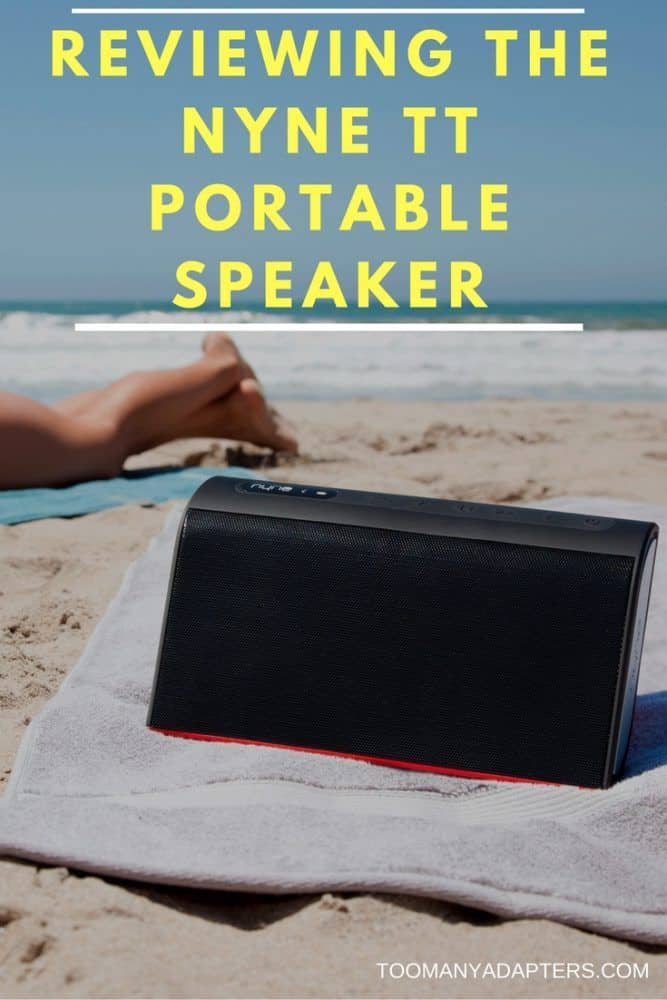