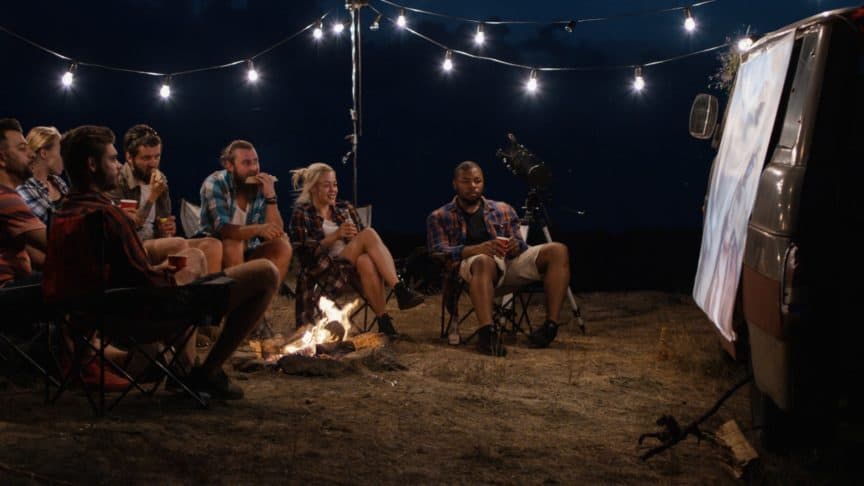 Mini projector technology has vastly improved in the last few years. Many brands now offer compact devices that you can easily toss in your bag, providing a portable entertainment system for camping trips, backpacking adventures, and backyard movies.

The more features you’re looking for, though, the more you’re going to need to spend. When it comes to projectors, you really do get what you pay for. Budget at least a couple hundred dollars for one that’s easily-portable and worth watching.

These are our favorite mini projectors at the moment, along with what’s not worth buying and advice on how to navigate complicated product descriptions. Things are not always as they seem when it comes to resolution and brightness in particular!

How to Choose a Mini Projector

Low-priced mini projectors are rarely as portable as mid to high-range options. Size and weight are important, especially for trips where you’re carrying all of your gear.

Don’t just consider the size of the projector itself: factor in any cables, tripods, and external speakers you also need to bring with you. If you’re looking for a projector to take outdoors or on camping trips, make sure it has a built-in battery so you don’t need to rely on an external power source.

A projector’s screen size refers to how large an image it can display, typically measured in inches across the diagonal. All of our recommended options support a screen size of 60″ or more (often, much more,) but remember that for any given projector, the larger the screen size, the dimmer and less sharp it will be.

Resolution claims for projectors get a little tricky to navigate. HD (high-definition) refers to a resolution of 1280 x 720 pixels. Full HD, the current standard for smartphones, is 1920 x 1080 pixels. The difficult part is that most projectors have two resolutions, native and maximum, and the difference is important.

The native resolution refers to the physical size of the projection panel. The bigger it is, the higher the quality of the image at a given size. Using software, all projectors can scale an image up from their native resolution to a maximum of HD or Full HD, but the more scaling that’s happening, the worse the image will look.

If you’re scaling from a native resolution of 320 x 240 pixels to Full HD at 100 inches, for example, don’t expect to enjoy the viewing experience. Product descriptions are misleading, especially for lower-cost units. They’ll make you think you’re purchasing an HD projector, but unless that’s the native resolution, you’re not really. Pay attention to the fine print.

Just to complicate things further, the light from a projector’s light source dims considerably on its way through the projector. On average, the ANSI lumen value of the projected image is often only about 30% of the value at its light source.

Some brands only advertise the lumen value of their projector’s lamp, and don’t clarify the difference. If you see a mini projector boasting 4000 lumens, it refers to the light coming from the bulb, not the brightness of the projection.

Our top recommendation is the Nebula Capsule II Smart Mini Projector. This small, sturdy gadget is compact and portable at only 24oz. Anker’s marketing campaign likens its size to a tall can of beer.

Back in 2017, Anker raised over a million dollars on a crowdfunding campaign for the original Nebula Capsule. Many people loved the idea of a powerful mini projector you could use in your backyard or take with you on road trips, camping, or backpacking adventures.

The second iteration improved upon the first by adding more connection options, higher resolution, and a brighter image. The Capsule II projects a native 720p resolution with 200 ANSI lumens of brightness at up to a 100” display. It’s not as bright as a larger, mounted projector, but it’s the best you’ll find packed into a device this small and portable.

The nearly three-hour battery life is enough to get you through an entire Marvel movie without needing a power source. An 8W speaker is built-in, a major asset for watching media outdoors. If you need even higher volume, you can plug in external speakers as well.

The projector uses Android TV to give you access to thousands of games and apps, including Hulu, YouTube, Amazon Prime, and Twitch. You can connect physically with HDMI and USB, or wirelessly through Wi-Fi, Bluetooth, or Chromecast.

We tested the Nebula Capsule II in depth and it didn’t disappoint. The ticket price is high, but if you know you’re going to get a lot of use out of your projector, this is the one to go for.

It could be argued that the Capsule II above is the best mini projector for travelers as well, but although it’s only about the size of a pint can, those traveling light may still find it too big and heavy to take with them.

The Magnasonic LED Pocket Pico Projector is seriously tiny, measuring roughly 4″ x 3″ and weighing just 4.5oz. It’ll fit easily into a small bag or backpack, and in reality you’ll probably barely notice it’s there. Projecting effectively at up to 60 inches, the built-in battery provides up to two hours of runtime.

Since the native resolution is only 640 x 360, don’t expect amazing image quality at the device’s upper limits, but it’s fine for the intended purpose: one or two people in a smaller space, rather than a group in a larger setting. The 25 lumen brightness also reflects this: shorter projection distances in dimmer rooms work best.

The projector comes with a range of different cables that can connect the HDMI input to most devices (except iPhones and iPads, since you need a separate Apple adapter for that.) There’s also a carry case, mini tripod, and microUSB charging cable, along with an audio jack for connecting larger speakers if the inbuilt 1W version isn’t to your liking.

Apple has paired up with projector manufacturer Miroir to sell small versions designed for use with iPhone, iPad, MacBook, and Apple TV.  As long as you have one of Apple’s Lightning to AV adapters, you’ll be all set to project directly from your mobile device.

The Miroir HD Mini Projector MP289 is a compact projector, although at 6.9 x 4.8 x 1.4″ and 27.5oz, it’s not the smallest on this list. Even so, it’s lightweight enough to justify dropping in an overnight bag without having to leave anything else important behind.

The MP289 has a 1080p native resolution and projects at an impressive 400 lumens. Able to display up to a 100″ screen, it connects to whatever streaming media players you prefer through its HDMI port, as well as streaming content directly from your iPhone or iPad via apps on the device.

The built-in battery provides up to two hours of projection time, and the 2x two-watt speakers are fine for indoor use. If you’re watching something outside or with a group of people, you can connect more powerful speakers via the 3.5mm audio jack.

Once you go under $100 for a mini projector, they become a lot larger than the other models we’ve recommended. They’re still portable, but not something you’ll be able to toss in your bag to take camping. They may also require a power source rather than running from battery power. Expect to use them in your backyard, not the backcountry.

The Vamvo L4500 is 7.3 x 5.6 x 3.0 inches and weighs two pounds, so it’s towards the upper end of what we’d consider a mini projector. It projects at anything up to a vast 200 inches, but with a native resolution of 1280×720, you’ll likely end up choosing a smaller screen size for greater clarity.

Like most cheaper mini projectors, the L4500 is at its best in dimmer conditions. Colors are surprisingly bright and vibrant with the lights off, but can appear quite washed out if you’re trying to view things in full daylight.

You can connect the projector to an iPhone or Android phone with the appropriate adapter. There’s also a microSD card slot for playing locally stored video, a USB socket for flash drives, and the ability to connect streaming devices and video game consoles over HDMI.

There’s also a durable carry bag for storing and moving the projector around, as well as an HDMI cable and remote control in the box.

Larger projectors like these have built-in fans to keep them cool. If you’re in a particularly quiet room and aren’t playing audio, you’ll likely be able to hear a slight sound, but otherwise it’ll probably just blend into the background noise.

You need to have a nearby outlet whenever you’re using the projector, since it doesn’t have a built-in battery and requires a power socket. The speaker is usually loud enough indoors, but you may want to connect external speakers for better sound or in an outdoor setting: there’s an audio jack for that purpose.

While this isn’t our top mini projector pick by any stretch, it’s a good option if you have a limited budget and don’t plan on taking it beyond a friend’s house or your own backyard.

Is There a Best Cheap Mini Projector?

When it comes to cheap mini projectors, our advice is simple: don’t waste your money on the super-budget versions. Plan to pay somewhere around $100 at a minimum, as spending less just means lower quality in terms of both durability and the image itself. That’s especially true when you make the picture large enough for multiple people to view.

Cheap projectors that boast HD quality projection are misleading. For example, the Fosa Mini Projector says it’s an HD projector supporting 1080p, but the device’s native resolution is 320 x 240 pixels. That’s a huge difference, one that your eyes will definitely notice. Spend a bit more on one of the other models we’ve mentioned above: you’ll be much happier with the end result.

As people are gathering outdoors for group events more often these days, things like backyard movie nights are becoming more common. A good mini projector is an investment, so plan to spend $100 or more to get something worthwhile, and $200-$600 for a model that’s truly portable with a built-in battery.

If it’s within your budget, the Nebula Capsule II Smart Mini Projector is the way to go. Easily the best all-round option, it’s compact and portable with clear pictures, a good speaker, strong compatibility with other devices, and direct access to thousands of apps and games.

For a more affordable option, opt for the Magnasonic LED Pocket if you still want something truly portable, or the Vamvo L4500 if you’re happy to restrict yourself to somewhere within range of a power socket. 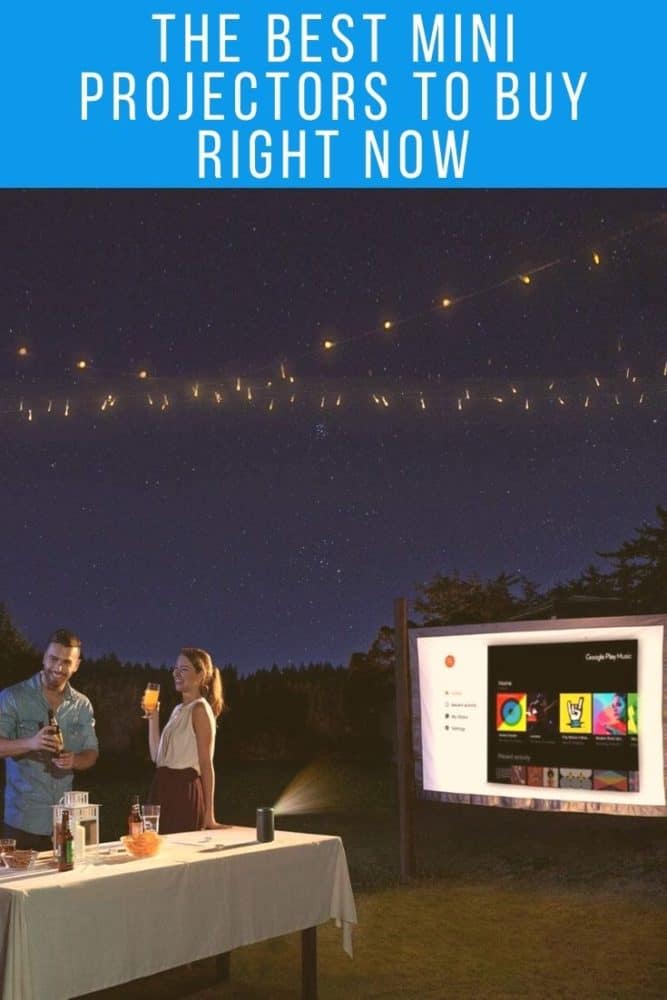