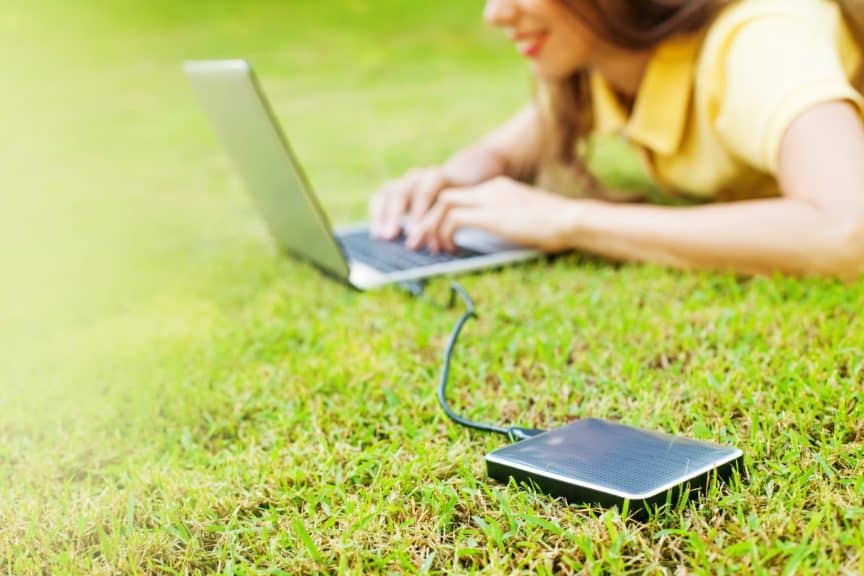 If you’re a traveling photographer or videographer, especially one who spends time in remote or rugged areas, having a good portable drive is vital. When you’re generating hours of footage or hundreds of shots every day, it’s the only way to quickly and reliably back up those irreplaceable files.

Of course, having a backup is useless if you can’t rely on it, which is why most cheap external drives aren’t much good on the road. They’re designed to sit on a desk for most of their life, not deal with the knocks, drops, rain, dust, and everything else that makes up the average travel day.

There are a few, though, built with this lifestyle in mind. Some just have basic drop protection, while others can handle even dust storms and complete submersion with ease. Many are very small and light, fitting easily in your pocket, and some are extremely fast, so you can back up huge video files in under a minute.

The main decision is whether to go for a hard drive with a traditional spinning disk (HDD) inside, or a more recent solid-state drive instead. SSDs are the best option, since they’re smaller, lighter, more robust, and much faster, but those benefits come with a significant price jump.

These five portable drives span the full range of options, from budget-minded versions to high-end performers.

Note: We’ve linked to the 2TB version of each drive to make price comparisons easier. Most come in other capacities, of course, so you can scale up or down to match your budget and storage needs.

Best on a Budget: Silicon Power A60

For around the same price as standard portable hard drives, the Silicon Power A60 adds some much-needed extra durability.

Along with IPX4-rated protection against spraying water, the drive’s rugged rubberized case gives a useful degree of shock protection. Performance is reasonable for a spinning drive like this, at around 120Mb/s, and there’s both USB 3.1 (Gen 1) and USB 2 support.

The A60 is slim and fairly lightweight, with a three-year manufacturer warranty. Like all such warranties, though, it only covers the drive, not the data on it. A short USB-A to USB-A cable is included, which wraps neatly around the drive so it doesn’t get lost.

Put simply, this is a great portable drive option for travelers on a budget, with more protection from the elements than you’d expect for the price.

We’ve long recommended the Transcend StoreJet 25M3S for travelers on a budget.

While recent price drops on the Silicon Power A60 (above) make it our current budget pick, the Storejet is a worthy competitor if you’re more worried about drops than water damage. Its rugged enclosure, with its anti-shock rubber case and internal suspension system, ensures the drive takes minor knocks and bumps in its stride.

USB 3.1 Gen 1 support (5Gbps) gets the most speed out of the 5400rpm drive during data transfers, with USB 2 compatibility for older machines. The Storejet ships with some basic backup software, and if you use it, there’s a button on the drive that lets you do one-touch backups.

Compatible with Windows, MacOS, and Linux, the Storejet is a solid, reasonably-priced storage option for travelers.

While basic drop resistance is a good start, you’re going to need something more if your trips take you off the beaten path. When you need your storage to be able to handle even the worst travel days, the Sandisk Professional G-Drive series is where it’s at.

With no moving parts, solid-state drives are inherently more able to handle drops and bumps, but here that’s just the beginning.

The G-Drive range can handle being submerged in three feet of water for half an hour, dropped 10 feet onto (carpeted) concrete, and crushed with 2000lbs of force, and can keep out dust and dirt almost indefinitely.

SSDs are much faster than standard hard drives as well, and the G-Drive can push data through at up to 1050MB/s. That makes it fast enough for even videographers and pro photographers who need to move large amounts of data around in a hurry.

All of this speed and durability comes at a price, of course: even by the standards of other portable SSDs, this is not a cheap piece of storage.

It’s a USB C drive, with a cable in the box, but there’s also a USB C to USB-A cable for those with older machines. Weighing barely three ounces and fitting in the palm of your hand, if you’ve got the money, the G-Drive is about as good as it gets in rugged portable storage right now.

We’ve loved Samsung’s range of tiny, sleek portable SSD drives since they first came out, and the latest T7 Shield model is no exception.

Available in sizes up to 2TB, as usual you’ll pay noticeably more than you would for a hard disk-based version with the same capacity. In return, you’ll get a drive that’s up to five times faster, weighs under 3.5 ounces, and is about the size of a small stack of business cards. Seriously, it’s absolutely tiny.

The Shield is Samsung’s rugged version of the standard T7, and adds plenty of protection to the original boardroom-focused model. You get proper IP65 water resistance and dust-proofing, and it’s rated to handle drops of nearly ten feet without damage or data loss.

Performance is blazingly fast, with transfer speeds of up to 1050MB/s. You’ll need to be using a computer with a USB C 3.2 Gen 2 (20Gb/s) port to see those kinds of numbers, but it’s backward-compatible with slower versions as well.

The T7 Shield has password protection and hardware encryption built-in. If you’d prefer to use your fingerprint to unlock your data, there’s a somewhat more expensive Touch model as well, but you lose the extra durability. For travel, we prefer the Shield. Either way, all T7 models have a three-year warranty, with both USB C and USB-A cables included in the box.

If you’re after spectacular performance from a small, durable portable drive, there’s nothing better than the Samsung T7 Shield for travelers right now.

Want the speed, durability, and small size of a portable SSD drive, but don’t want to spend a fortune to get it? Sadly there’s no free lunch when it comes to SSDs, since they’re more expensive than hard drives no matter which one you buy, but some are better value than others.

The Sandisk Extreme Portable is often a bit cheaper than the other SSD-based portable drives we’ve listed, and a good fit for the majority of travelers. Smaller than the average smartphone, it weighs under three ounces, and fits in the palm of your hand.

It’s not the smallest portable drive you can buy, but compared to many other models, it’s still minuscule. Transfer speeds are extremely fast, both on the spec sheet and more importantly in independent tests. It ships with both USB C and USB-A cables.

The Sandisk Extreme Portable is a fairly rugged drive, able to handle drops of over six feet, and its IP55 rating promises a reasonable degree of protection from both water and dust. It’s not fully resistant to either, though.

So, of the three SSD portable drives we list in this guide, which should you buy? If you’ll regularly be traveling in extreme conditions, consider the Sandisk Professional G-Drive. If you want a faster version that’s still impressively rugged, go for the Samsung T7 Shield instead.

If you’re just after a fast portable drive that’s small and light but can still handle a bit of bad weather and rough treatment, the Sandisk Extreme Portable is a great alternative. Given its competitive pricing, it’s our top budget portable SSD pick for travelers.

Title image via Sandisk, others via Amazon 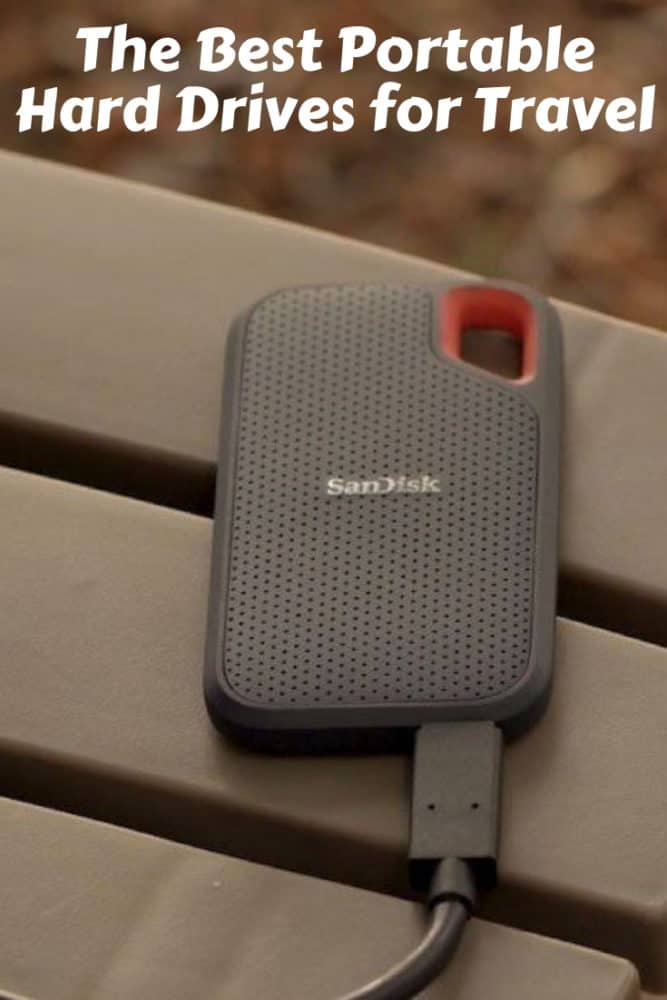