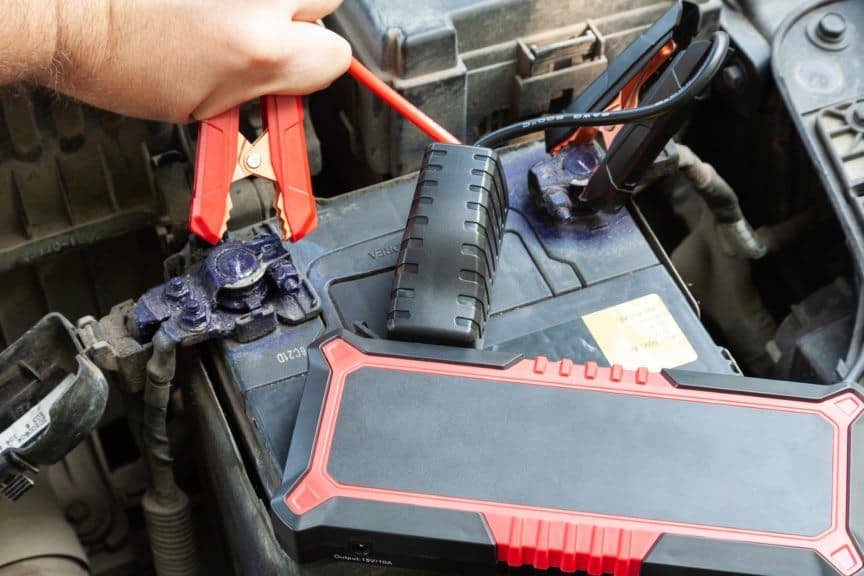 We all know the feeling, and it’s not a good one: you try to start your vehicle, only to be greeted with silence instead of the purr of the engine. The battery is dead, and now you have to flag down a random stranger to give you a jump, or call for assistance. Or do you?

As it turns out, you can solve your own problem with the use of a portable jump starter. These little devices can be as small as a paperback book, yet pack enough power to start a standard vehicle several times. Heavy-duty models can even jumpstart trucks and boats.

These gadgets connect to your vehicle’s battery in the same way that traditional jump cables do. The difference, of course, is that the other end is occupied by an judgement-free electronic device, rather than a stranger in the grocery store parking lot.

You typically charge a portable jump starter the same way you’d charge a power bank: from a wall outlet, car accessory port, or USB socket. Better ones hold their charge for a long time (18+ months), so you can keep them in your vehicle until they’re needed. Just check the battery level every once in a while: most have an onboard display to make this easier.

Many of the jump starters we looked at bundle in some extra features. Most include a flashlight of some description, plus one or more USB ports for charging mobile devices. 12v sockets are also quite common, air compressors and inverters sometimes make an appearance, and there’s at least one with inbuilt speakers.

Having these extras might seem like a gimmick, and in some cases, they probably are. You typically aren’t adding much if any extra weight or cost to get them, though, and chances are you’ll likely use at least some them more often than you expect.

A lack of additional features like these wasn’t a deal-breaker for us, but when choosing between two otherwise similar jump starters, we went for the one with useful extras.

With all of that out the way, let’s get into it. These are our recommendations for the best portable jump starters on the market in 2022.

In plain English, this means the Alpha85 can start almost every car, van, and pickup truck (even heavy-duty trucks), but it’s not suitable for semi trucks or boats.

The Alpha85 hits all the right notes, and it’s our pick as the best portable jump starter overall. It’s compact (9.1 x 4.1 x 1.8 inches), lightweight (two pounds), safe, and simple to use. It also has a built-in LED flashlight with three modes of operation: flashlight, strobe, and SOS.

With a capacity of 20,000mAh, this model can theoretically jump start a small vehicle up to 60 times on a single charge. It also doubles as a power bank, with ports to charge devices via USB-A, USB C, and 12V DC.

The battery is designed to hold its charge for up to 18 months. In case you ever find it dead, the quick-charge feature gives it a full charge in around 90 minutes, or enough for a single jump in about five minutes.

The device works down to -5°F, but if you live or travel in particularly cold climates, it’s worth considering the Alpha85S model instead: this has a pre-heating feature that lets it function in temperatures as low as -40°F.

Bundles are available for both the Alpha85 and Alpha85S that also include a carry case with space for the jump starter, cables, and charger.

The Clore Automotive Jump-N-Carry JNC660 is our runner-up pick for the best car jump starter. It’s an extremely reliable, versatile, and durable product that has become the favorite of tow truck drivers and rescue vehicles, due to its unmatched reliability.

First off, the bad news: This is a big boy, weighing in at 18lbs and measuring 16.3 x 14.1 x 5.1 inches. The capacity and peak output is around the same as the much smaller and lighter HULKMAN model above, so what gives?

The main difference is that the Jump-N-Carry uses a bulky lead-acid battery that is specifically designed for jump starting. While heavy, this battery delivers exceptional cranking power and an unmatched service life. Plus, if it ever does wear out, the internal battery is replaceable (you can buy the replacement battery on Amazon).

This model is also substantially more rugged and durable than our top pick, with a heavy-duty case protecting the internal components from wear and tear. Extra-long 46” cables make it easy to hook up to batteries in any vehicle, with industrial-grade clamps on the end designed to penetrate corrosion on battery connectors.

The Jump-N-Carry JNC660 can power accessories via its built-in 12V port, although it lacks USB ports for mobile device charging. The battery itself charges via a built-in cable, which pulls out when needed. It’s also designed to be left plugged in if desired, so it will always be fully charged when it’s needed.

Long story short, if you’re looking for a rugged, professional-grade jump starter, go for the Jump-N-Carry. Prefer a more compact, consumer-grade option with extra features? Grab the HULKMAN instead.

Ever had a dead battery and a flat tire at the same time? No? Well, for those unfortunate souls out there who have, the Stanley J5C09 is their savior.

This jump starter includes a built-in air compressor, offering 120PSI (adequate to refill vehicle tires), as well as a 1000 peak amp jump starter. There’s also a rotating LED light that makes it easier to jump a vehicle at night, and the JC509 also doubles as a power bank to charge electronics via the USB-A port.

This multi-function device can’t yet drive your vehicle on autopilot or change your oil, but we’ll see what Stanley comes up with in next year’s model.

The J5C09 is a versatile option for different kinds of vehicle maintenance. The main downside is that it’s bulky, at 17.2 pounds and 11.3 x 8.0 x 3.5 inches. Additionally, the air compressor cable is quite short, making it awkward to use in some situations.

Need to jump start a semi truck or large boat? Look no further than the Schumacher DSR ProSeries. This bad boy can put out up to 4400 peak amps, more than twice the rating of our other top picks.

This is more than enough juice for even the largest vehicles, including class 8 vehicles such as commercial semi trucks, garbage trucks, and even fire engines if you happen to have one of those in your backyard.

This is definitely the best portable jump starter for trucks, as it packs enough power for just about any non-military vehicle out there. It also has 60-inch jumper cables, which are helpful for reaching into the deep engine bays of commercial vehicles, and supports jumping of both 12v and 24v vehicle batteries.

As you would expect, the downsides are bulkiness (41.2lbs, 14 x 10 x 8 inches) and an above-average price tag. For those who need the heavy-duty power punch of a 4400 amp jump starter, though, this is an excellent choice.

On the opposite end of the spectrum from the 41lb pick above, you have the Scosche PBJ300-1 PowerUp 300. This little guy weighs just 1.4lbs, and measures 10.1 x 5.3 x 2.9 inches. It’s nearly pocket-size, and certainly small enough to throw in a bag or your glove box.

Aimed at smaller vehicles, the 300 peak amps is enough to jumpstart four and six cylinder engines up to 3.5 liters. If you have something larger, the company also makes 400 and 600 amp versions, although we’d probably go for our top pick at that point.

The PBJ300-1 has a USB-A port for charging mobile devices, along with a flashlight to help see what you’re doing in a dark engine bay. The light also has an SOS mode in case of a genuine emergency.

As you’d expect with a compact device like this, the jumper cables on this unit are quite short. The manufacturer doesn’t include a wall charger in the package, but there is a travel case, 12v car adapter, and a USB-A to USB C cable in the box.

Michelin is one of the best-known names in automotive accessories, so it’s hardly surprising that the company has come out with a portable jump starter. What is surprising, however, is just how much more the company’s Power Source XR1 can do beyond just firing up your vehicle.

Michelin has really gone for gold with the extras here. As well as two 12v DC ports and a USB-A socket, there’s an inverter with a pair of 110v wall outlets as well. Don’t expect to run your hair dryer off them — maximum sustained output is only 200 watts — but they’d be fine for small appliances like a fan or laptop.

The fun doesn’t stop there, though. There’s a 260psi air compressor tucked away behind a flap on one side, and an AM/FM radio and a pair of stereo speakers built in. If you’d rather listen to podcasts or stream your own music, you can do that via an aux cable or Bluetooth instead.

Turning to the actual jump-starting capabilities, the cables are usefully long (a relative rarity in this space), and the 1000 amp peak output is enough to start pretty much any domestic vehicle. It’s not the smallest or lightest portable jump starter out there, but given everything it can do, it’ll easily justify the space in your trunk. 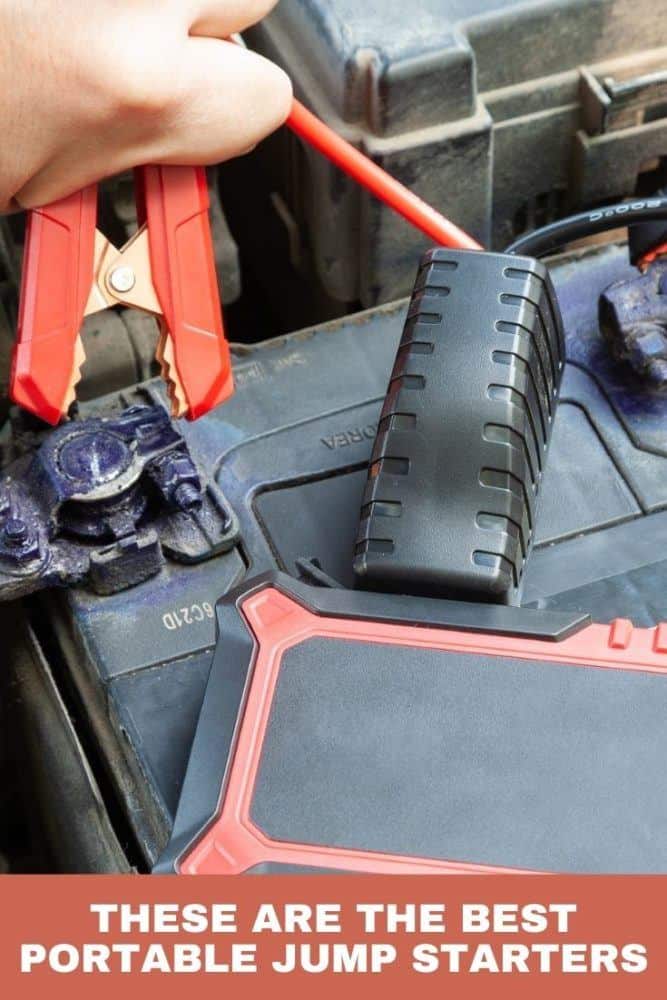