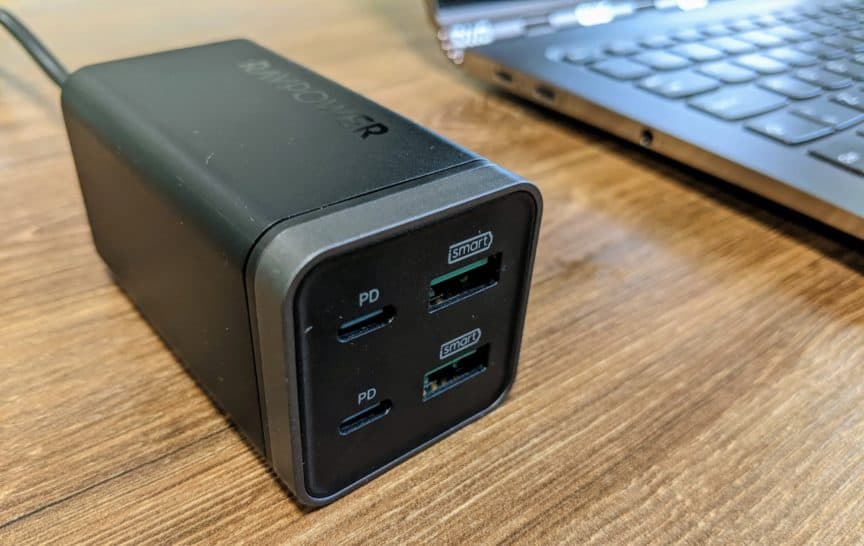 The move to USB C charging over the last few years has been significant no matter what device you’re using, but especially when it comes to laptops. You’re no longer stuck with the bulky, single-purpose chargers shipped by most manufacturers: instead, you can pick and choose from an increasingly wide range of third-party options.

The best of these chargers are small and light, yet still let you power several devices at once. Even so, you still need to read the fine print and know what you’re planning to charge: if the maximum output, either per-port or in total, doesn’t match what your devices require, you’ll end up with very slow charging rates indeed.

That’s why I was intrigued by RAVPower’s latest version, a 65W model with Power Delivery (PD) and a mix of USB C and USB-A sockets. On paper it looked like something that could potentially replace all of my usual chargers whenever I’m out of the house, but does the reality match the spec sheet?

The RAVPower PD Pioneer 65W charger is a small black cube, measuring 3″ x 1.6″ x 1.6″ (7.6 x 3.1 x 3.1cm) and weighing 5.8oz (164g,) not including the five-foot power cable that plugs into the back. A small green light on top lets you know when it has power, and the front has a 2×2 grid of sockets. Other than the logo and compliance details, that’s about it for physical features.

On the left, two USB C power delivery (PD) ports put out up to 65W each. That means that most phones, tablets, and laptops that charge via USB C will do so at full speed. The two USB-A “smart” ports on the right put out up to 18W each, enough to fast-charge most mobile devices.

Note that the maximum output of the charger is also 65W. If you’re only charging one device, this doesn’t matter at all. If you’re planning to charge your laptop alongside other devices, though, expect somewhat slower speeds. More on that below.

As you’d hope, the input voltage covers the full 100-240v range. As long as the AC plug physically fits in the socket (using a travel adapter if necessary), you’ll be able to use this charger anywhere in the world.

The charger arrived in a small box, accompanied only by the AC power cable and a small instruction manual. With chargers like these, I split the testing into two parts. The first is objective, measuring the power output with a range of devices to make sure the manufacturer’s claims match reality.

The second is subjective, where I replace all of my usual chargers with the one I’m testing and use it consistently for a week or two. This gives a better idea of both its reliability and whether it would be practical to take it on a trip and leave most or all of your regular chargers at home.

One thing I did notice in my testing was how tight the USB-A sockets were. The first few times I plugged a cable into either of them, I was worried it’d be stuck there forever. They loosened up a bit over time, and whether this was just because my review sample was from an early production run, I don’t know. Still, worthy of a mention.

I first tested each of the ports individually to ensure they put out as much power as promised, comparing the output to my usual phone, tablet, and laptop chargers. Where appropriate, I compared both USB C and USB-A charging of a given device.

To test the 65W maximum, I repeatedly plugged in the laptop and then a range of other devices one after the other to see how the charge level changed. Starting at 50W, the output to the laptop fell to 38W when I plugged a phone into the other USB C port. It dropped to 15W when I connected a second phone to a USB-A port, and stayed there when I started charging a tablet or headphones from the final port.

Those results aren’t unexpected. With all chargers, each port only has a few power output options, and the device at the other end then makes up its own mind about how much of that offered power it wants to draw. As a result, you’ll very rarely see the full potential (in this case, 65W) in use.

Repeating the same tests without the laptop, the power output to the first device (a phone) didn’t change no matter what else I connected. I tried with phones, tablets, headphones, speakers, and anything else I had lying around, and the numbers didn’t budge.

RAVPower provides the following information showing the maximum output per port in each scenario, which is consistent with what I saw.

So that’s all well and good, but what do those numbers mean in the real world?

An 18W maximum isn’t enough to charge any modern laptop at a reasonable speed, and whether 45W is sufficient depends on the model. It’d be fine for either of our current top laptop picks: the latest Macbook Air comes with a 30W charger, for example, while the Dell XPS 13 ships with a 45W version. Other laptops that expect 65W or more, however, will charge noticeably more slowly.

The basic takeaway from this is that if you want to ensure your laptop is charging as fast as possible, don’t have a bunch of other devices plugged in at the same time. If you’re only charging smaller mobile devices like phones, tablets, or headphones, there’s no problem using all the ports at once.

Sometimes after plugging a phone into the second USB C port, the output to the Lenovo laptop dropped to almost nothing. Unplugging and reconnecting the laptop cable always got things back to normal and I couldn’t replicate the issue on the Macbook Pro, so it was a mild annoyance rather than a major concern. Still, it’s something that I’ve flagged with RAVPower.

After spending a few hours doing the above testing, I put all of my usual chargers into a drawer and exclusively used the PD Pioneer for a week. It charged at least my laptop and phone for most of each day, and other devices as needed.

As above, with a phone always connected as well, the output to this particular laptop usually sat around 35W. That was enough for it to charge to 100% very slowly, and to stay there afterward.

Given how rarely I’m leaving the house these days, a slower charging rate made zero difference to my life. Had it mattered, I’d have just stopped charging the phone for an hour or two to let the laptop receive maximum power.

The length of the AC cable never proved to be a problem, even when I was using power sockets tucked away behind the sofa or television. It’d be easy enough to buy a longer one if needed, though, since it’s a standard figure-eight type. A longer USB C cable would also solve the issue.

I had no problem fitting the charger and cables into the top pocket of my usual daypack, which is more than I can say for my usual laptop charger. Whenever I do start working from cafes and flying again, I’d have no concerns about the size and weight.

Small chargers like these sometimes have problems with heat buildup when they’re under heavy load, but that wasn’t an issue here. While it warmed up when charging several devices at once, it never got particularly hot. I could always hold it comfortably in my hand.

Overall, the RAVPower PD Pioneer is a good example of the progress we’ve seen in recent years in something as mundane as a wall charger. It’s both smaller and lighter than the factory chargers it replaces, even becoming significantly more useful.

Being able to charge up to four phones or other small USB-powered devices at once, all of them at or close to full speed, is impressive from any charger this size. Using the same charger to power your laptop is the icing on the cake.

If you’re hitting the road with the usual array of electronics that most of us travel with these days, it could easily replace most (and potentially, all) of the chargers you normally take.

I found the charger reliable in my testing, but that intermittent problem with a power drop to the Lenovo laptop after connecting a phone was a minor concern. Since it didn’t happen on a Macbook and I don’t have other USB C laptops to test with, it’s hard to say whether there’s a larger issue there or not.

Even so, since the problem was fixable just by unplugging and reconnecting the cable, I’d still be happy to travel with this charger. The size and weight savings in my luggage would be significant, especially when traveling carry-on.

If you’re traveling with an Apple laptop (or no laptop at all,) and in the market for a smaller, more-useful charger, this should be right up the top of your list. If you’ve got a different laptop model, it’s still very much worth considering: just be sure to test it for a few minutes before throwing the packaging away! 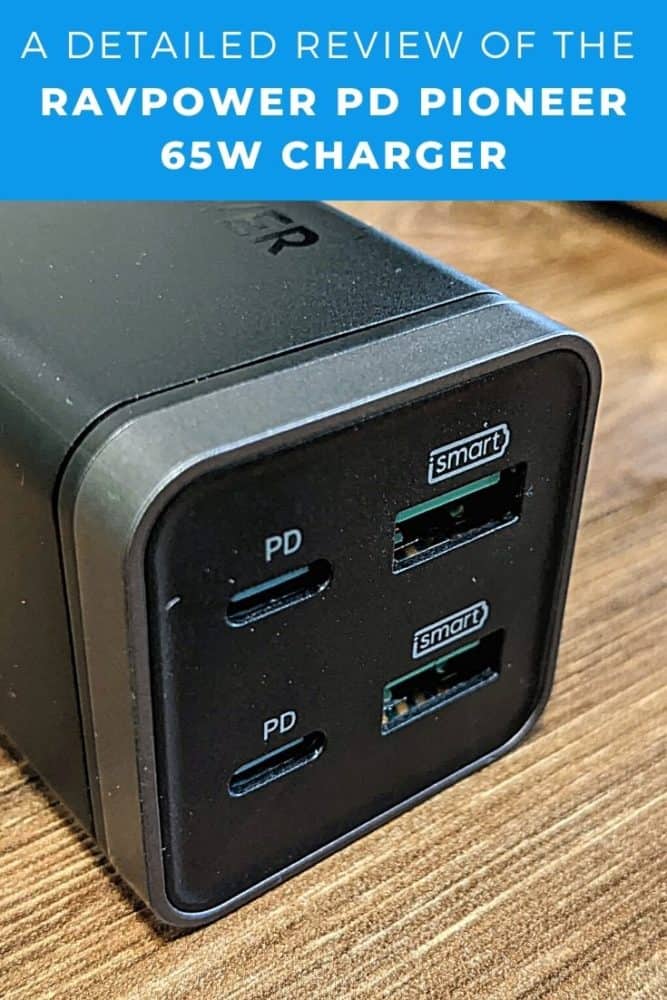