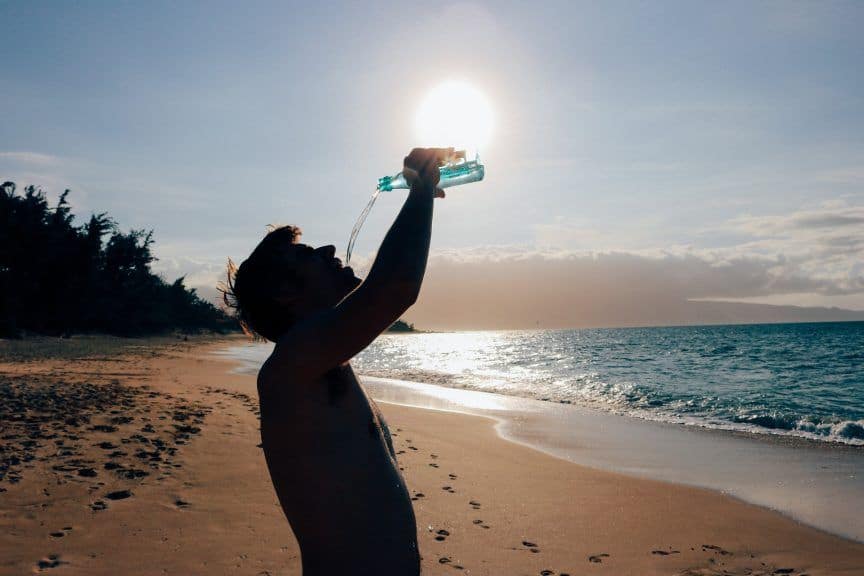 It’s only when you’ve been traveling for a while in countries with unsafe water that you truly appreciate being able to drink what comes out of the tap back home.

Sure, you can usually buy bottled water cheaply in those countries, but you’re not always sure where it came from. The environmental impact of plastic bottles is also hard to ignore when you see them washing up on the beach around you.

Water purifiers can give you the best of both worlds: clean, safe water on demand, without destroying the environment in the process. They’re a varied lot, though, and picking the wrong one can leave you with foul-tasting water and major stomach problems.

You’re looking for something that will kill bacteria, cysts, and viruses. It’s the last of those in particular that many devices won’t destroy.

At a minimum, you need something that won’t make the water taste worse than it already does. Ideally, it should also filter out particulates, chlorine, and metals so that the water tastes better than when you started.

Finally, it needs to be appropriate for travel: light, robust, and reliable, at a price that won’t break the bank. There aren’t many that fit the bill, but luckily there are a few. Here are six of the best water purifiers for travel (or daily life) right now.

Probably the most well-known portable water purifier, the various models of Steripen use a UV lamp to kill the bugs and bacteria. You just dunk the lamp into a cup or water bottle, stir for a minute or two, then drink. It’s a straightforward and inexpensive process, but it does have some limitations.

Firstly, it only purifies: there’s no filtering mechanism. This means you can’t use cloudy/dirty water with it, and while the treated version is unlikely to make you sick, it won’t taste any better than when you started.

The reliance on battery power also isn’t ideal, although at least this Ultra model charges via USB. Cheaper versions use hard-to-find disposable batteries, which is the last thing you need when you’re in the middle of nowhere.

While it’s good to be able to purify water in any vessel, I’d rather carry a bottle with a UV lamp built-in like the Crazy Cap (below). That way I could purify when necessary, and just use it as a normal water bottle the rest of the time.

Still, if you only want a small, lightweight purifier and the water you’re using is reasonably free of dirt and minerals to start with, the Steripen Ultra is a simple and effective option.

Despite the silly name, the CrazyCap Pro is a stylish and effective water purifying bottle with a couple of tricks up its sleeve. Like the Steripen it’s UV-powered, so it does a good job of killing bacteria, cysts, and viruses in clear water, but won’t purify cloudy or dirty water, heavy metals, or other physical contaminants.

The UV lamp is built into the cap, which has a universal screw top for attaching to any bottle with a similarly-sized neck. This lets you use the CrazyCap Pro to purify water in bottles other than the one it comes with, so if you have a favorite water bottle already, you can buy the cap separately instead.

If you do use the company’s stainless-steel bottle, though, you’ll benefit from its insulation. It’ll keep drinks cold for up to 24 hours, or hot for up to 12 hours. There’s a range of attractive colors available: I particularly like the classic blue, but would be happy toting just about any of them.

You don’t need to do anything else except wait, making this one of the most straightforward purifiers we’ve come across. The cap also automatically activates for 20 seconds every hour, to help kill mold and bacteria and prevent the bottle from smelling.

The charger fits over top of the cap and uses a standard USB cable. The battery should last at least a week of normal use, and recharges in a few hours. Being able to do this from a portable battery or solar charger is handy for camping and hiking trips where mains power isn’t available.

Rated to last half a million cycles, and able to kill a remarkable 99.99999% of E.coli bacteria in Pro mode, the CrazyCap Pro is one of the best water purifiers we’ve come across for cleaning clear water.

There are several different models of purifier in the UK-made Drinksafe range, but my preference is the “Travel Tap” for one simple reason. As well as sucking water through the filtering/purification mechanism like the other models, you can also use the Travel Tap by gently squeezing the bottle.

This simple change greatly increases its usefulness, letting you do things like rinse your toothbrush and irrigate wounds with clean water.

I also like that you can remove the filter mechanism if you know the water is safe, meaning you don’t use it up unnecessarily. A lanyard and insulation sleeve are included in the package.

The Travel Tap has an 800ml capacity. It can purify up to 1600 liters of water before the auto-shutdown mechanism kicks in and the filter cartridge needs replacing. That’s pretty good: if you’re drinking two liters a day, it’s over two years of daily use.

Water flow is around 300ml/minute. That’s fine most of the time, but perhaps a little frustrating if you’re particularly thirsty.

The LifeSaver was originally developed to provide clean water to people in developing countries who wouldn’t otherwise have access to it, and it shows in the design.

It’s a simple piece of equipment that’s easy to use, reasonably robust, and lasts a long time without needing maintenance. That makes it equally useful for travelers as well.

It’s relatively heavy, at around 22oz (625g) when empty, so may not be for you if you’re an ultra-lightweight traveler. The purification cartridge lasts for an impressive 4000 liters before needing replacement, and there’s also a model with a 6000-liter limit.

You’ll need to replace the carbon filters more frequently, though. Depending on how dirty the water you’re using is, it’ll be roughly every 250 liters.

Filtering of the 750ml capacity takes under a minute, which compares favorably to many other approaches. The failsafe filter and cartridge mechanism won’t let you pump water after they’re used up, which is a much better approach than trying to remember how much water you’ve used, or using your stomach as a petrie dish to find out.

That the LifeSaver functions just like a normal water bottle is also very handy. It lets you tip the water into something else to let you rinse out a cut, cook, or brush your teeth with it.

There’s plenty to like about the GRAYL UltraPress. Rather than using a straw or manual pumping mechanism, this purifier works more like a coffee press. You fill the bottom part up with water, attach the top part, and press down.

Thirty seconds later, you’ve got a bit under 17oz (500ml) of clean water in a stylish container. It’s super-simple and reliable, and the filter eliminates pretty much everything including viruses.

So what don’t I like? Well, a couple of things. The capacity is a bit low: you’ll get through half a liter pretty quickly in hot countries. Of course, being able to fill it up again from almost any water source negates that problem somewhat, but not entirely.

If you need the extra capacity, you can opt for GRAYL’s Geopress model instead. It works in much the same way, but purifies 24oz (710ml) of water at a time. The trade-off? It’s bigger and heavier.

Secondly, it’s more expensive for lengthy trips than some of the other options. The filter only treats 150 liters of water before it needs replacing, assuming you can find one wherever you happen to be. I’d suggest taking an extra filter from home if you’re likely to need one.

Overall, though, the GRAYL UltraPress is an effective and easy-to-use water purifier that’s ideal for trips up to a few weeks long. We’ve used it extensively during our travels, and it hasn’t failed us yet. You can find our full review here.

While it’s really aimed more at hikers and back-country campers, the Survivor Filter Pro works well for travelers as well. At just over 8oz (230g) it’s a lightweight option, and a manageable 3.2 x 2.0 x 6.5″ in size.

The Filter Pro has three-stage filtration, with the carbon filter capable of handling 2000 liters before needing replacement, and the other two filters handling up to a huge 100,000 liters.

You can push up to 17oz (500ml) of water a minute through the Filter Pro, which is more than fine when traveling as a couple or individual. You can filter a liter or two of water in a few minutes before heading out for the day.

The company touts the efficiency of its 0.1-micron filters, particularly for dealing with heavy metals that most other systems can’t touch.

Reasonably priced and with an easy-to-use pumping mechanism, the only minor flaw for travelers is the tube-based intake mechanism. It works very well for filling from rivers and lakes, but can be a bit fiddly to use from a tap. Still, there’s always the sink!

Which Would I Buy?

So, crunch time. If I had to buy a water purifier for an upcoming trip, which would it be? All things considered, I’d go for the Grayl UltraPress for most short to medium-length trips. It’s effective, durable, and easy to use, at an affordable price.

Being able to filter out light sediment and other particulates, while still having the option of using the filtered water outside the bottle, makes it more useful than many of the alternatives.

Since the purified water stays inside the GRAYL, there’s no need to carry a separate bottle or container as well, which is useful in keeping the weight down. For all those reasons, it’s my pick for the best water purifier for travel in 2022.

If I was planning to spend months or years somewhere where the water quality was dubious, though, I’d opt for the LifeSaver instead. With long-lasting cartridges, it’d easily pay off its higher price, and not having to find replacements so often would also be very useful. It’s also more robust than many other models of water purifer, which can never be a bad thing.

Finally, if I was confident I’d only need to filter water that wasn’t contaminated with particulates or heavy metals, I’d also consider the CrazyCap Pro. It’s more stylish than the rest, with excellent protection against E.coli, and the insulated bottle makes it particularly appealing.

Unlike a filter-based purifier, the UV lamp should last hundreds of thousands of cycles, so there are no concerns about having to find replacement parts mid-trip.

Do you carry a water purifier? Which one, and why? 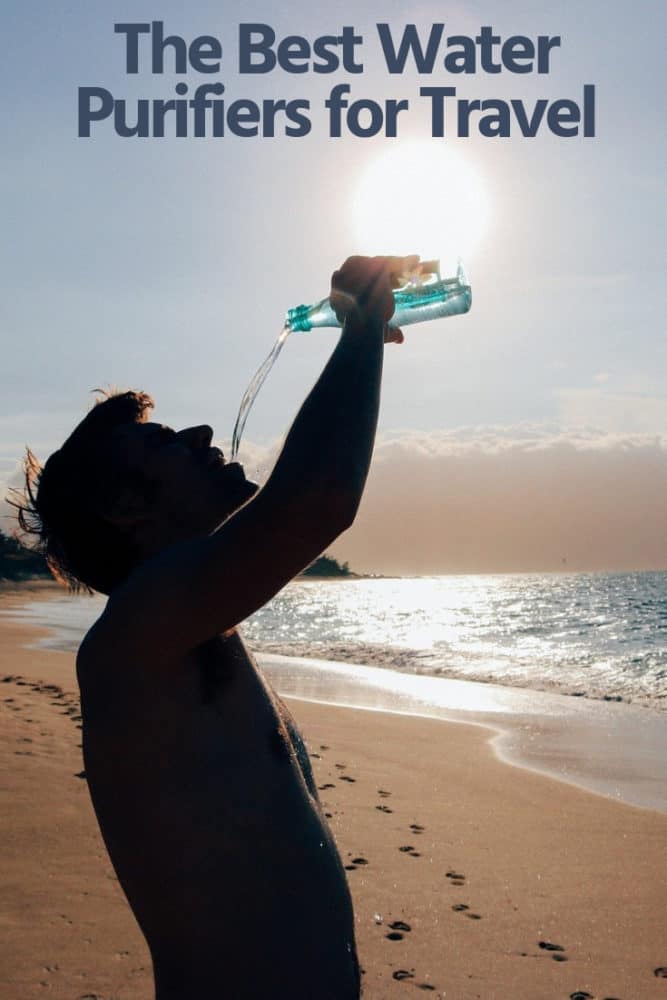